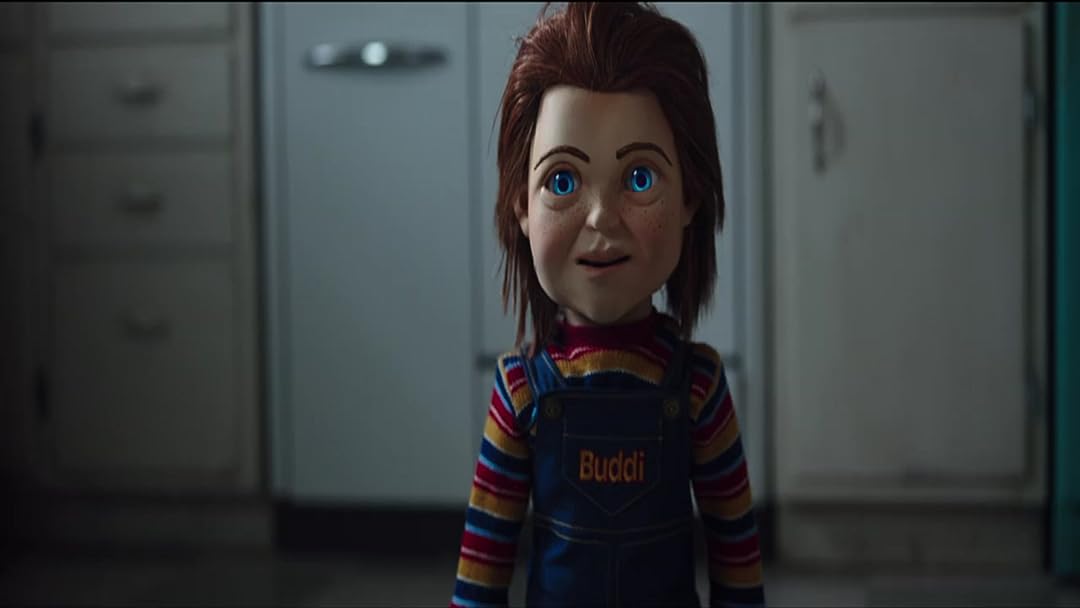 (980)
5.71 h 29 min2019X-RayR
A contemporary re-imagining of the 1988 horror classic, "Child's Play" follows Karen, a single mother who gifts her son Andy a Buddi doll, unaware of its more sinister nature.

Leaves EPIX in 10 daysRentals include 30 days to start watching this video and 48 hours to finish once started.
Add to
Watchlist
By ordering or viewing, you agree to our Terms. Sold by Amazon.com Services LLC.
Write review

TreyReviewed in the United States on September 11, 2019
1.0 out of 5 stars
You could just burn your money... it'd be more fun.
Verified purchase
It's like if Evil Dead, Ted, and Child's Play all got together to make a movie, but not in a good way. It's just not scary. I remember being terrified as a kid from these movies, but this one was just silly. Chucky is dumb looking, his new origin story is ridiculous, and his new voice is laughable. This is one of the movies you should just wait until it's free.
93 people found this helpful

MoReviewed in the United States on September 14, 2019
2.0 out of 5 stars
`Child's Play` only in title...
Verified purchase
The only things in this movie that resemble the original are a few of the character names, namely Andy and Chucky, and his (Chucky's) attire. They're not even Good Guy dolls, they're Buddi dolls. What a stupid thing to change if you're going to bother 'rebooting' the movie to begin with.

Honestly, they should've just changed these things and made a completely unique movie. They could've even used that Five Nights at Freddie's looking critter through the whole thing instead...

This was just too different to be titled "Child's Play".

The concept was OK, but if you're going to reboot a movie, you need to stay true to the original in more aspects than a few names and a crappy costume.

Weak. Very weak. Surprised this isn't available to stream for free yet.

NobleReviewed in the United States on September 12, 2019
5.0 out of 5 stars
Reimagining not a Reboot
Verified purchase
Grew up with the original child's play and I really loved this one too! All the negative bad reviews about this just seem to be from people who think it is a reboot with nothing new or original added into it. Honestly a re-imagining shouldn't be entirely like the original. There are plenty of nods to the original but its a completely new chucky movie. If you're a chucky fan go into this with an open mind knowing its a re-imagining and not a reboot/remake and i think you'll enjoy it!
52 people found this helpful

They changed the story too. No more Charles Ray's soul in the doll. Chucky is a miss-functional Alexa in doll form.
33 people found this helpful

Amazon CustomerReviewed in the United States on September 28, 2019
4.0 out of 5 stars
Not a remake or a reboot.
Verified purchase
So aside from the title itself and the concept of a killer doll, this film makes no attempt to be a remake of the original. It's literally in it's own realm of a film with the similar concept of a boy having a doll for a companion. From there it takes off on a whole different story and honestly does a great job, I was very entertained. This coming from a hardcore fan of Chucky, I literally was obsessed with him as a child and still to this day he's my favorite out of the horror listings (Michael Myers, Jason Voorhees, Freddy Kruegar etc.) and not once while watching this did I compare the films to eachother because this movie stood on it's own very well. It's feels as if it wasn't trying to be scary but more along coming off as entertaining which was accomplished in my viewing. Now that doesn't mean it wasn't aimed for the dark and mature nature of the horror genre, there was definitely some disturbing moments and all around had my interest throughout it's run. Very smart with the way it was filmed imo, as if the film was well aware and ahead of it's hammy or silly antics and was able to turn those around to our critical viewpoints and make it enjoyable to accept it's silliness. Overall I really liked it and can easily recommend it to any chucky fans. Remember though it's an individual film in itself and literally as no relation to the original other than the Chucky doll character, so go into with that in thought and it should be enjoyable for you as well.
24 people found this helpful

ScottReviewed in the United States on June 19, 2020
5.0 out of 5 stars
You're a curmudgeon if you think this wasn't a good reboot.
Verified purchase
Title says it all. Solid reboot. I honestly wanted to hate it, having grown up on the child's play series. And to sum it up for me, I was looking at this as a joke especially when you initially see the 'Buddi' dolls, at least for me, it appears they looked more like life-like bitmoji dolls which was really off putting. However, and much like the original child's play series, the dolls in the box/on display aren't as well formed or as high quality as the one used for the main character Buddi as they're cheaper models just used for the scenes... That and the doll just kind of grows on you as you get a sense of it's "personality." Mark Hamill did quite well in that voice, and I don't mind that it's totally a different take on the child's play series - as any fan would know the voice tone / pitch changes when the real "soul" that is occupying the original's reveals himself.. But that entire idea is different here, which is FINE because they quite literally tried (and did well at) covering loose ends of the story-line. i.e. defective hardware and such that keeps him from initially connecting to the main network. On that note as well, I'd like to point out how eerie it is that Amazon Prime is hosting this right now! (HAHA) I mean think about it.. The entire 'unified connectivity' that is the Kaslan company.. That's Amazon, that's Amazon Echo, that's as-if Amazon was to make a Buddi doll that had A.I. and could connect to all of it's devices (LikE aN eCho!).. Eerie, yeah? I think so. But yeah- A solid watch. I enjoyed it :)
9 people found this helpful

joel wingReviewed in the United States on June 17, 2020
1.0 out of 5 stars
Chucky doesnt look scary and the story is a total flop
Verified purchase
This of course is a remake of the classic Child’s Play released in 1988 featuring Chucky a doll possessed by the spirit of a serial killer. They changed the story this time. An angry Chinese programmer at the Buddi factory decides to take off all the safety protocols on the doll which is a smart computer. It becomes conscious as a result and becomes a killer.

The first thing you notice is that the Buddi dolls look horrible. The original Chucky looked evil when he came alive. This one just looks weird which destroys a main element of the movie.

Then there’s the unbelievable stuff like when the kid that owns Chucky throws it away in his apartment’s garbage chute and the doll re-appears back in his house and the kid just walks off.

These are all signs that nothing really works in this film.
C
8 people found this helpful

SilkReviewed in the United States on March 25, 2020
5.0 out of 5 stars
This is how to do a remake.
Verified purchase
Frankly I never much got into the original childs play. Andy was like barely a pre schooler, and well as a guy I dont really tend to identify with a single mom character. So for an older guy it really didnt have a protagonist to connect with.

Really for me the original trilogy, number 3 with a teen aged Andy was the best. I actually could connect with him then.

People who say this takes the series in a silly child friendly direction are wrong. In this day and age where plenty of tweens are watching supernatural with some decent gore every week, this movie is not really over the top gore for the age range. new Andy and his friends are old enough that even adults can connect to them. The film smartly starts with red shirts and works its way up to a meaningful victim then slides smoothly into mass murder mode, though imo the climax could of used abit more Carry blood bath.

The craziest part of the film Aubrey Plaza's character not having every guy in a tri state area fighting to the death to date her. That woman could be octomom and Id still walk over broken glass and burning coals just to ask her out.
3 people found this helpful
See all reviews
Back to top
Get to Know Us
Make Money with Us
Amazon Payment Products
Let Us Help You
EnglishChoose a language for shopping. United StatesChoose a country/region for shopping.
© 1996-2021, Amazon.com, Inc. or its affiliates