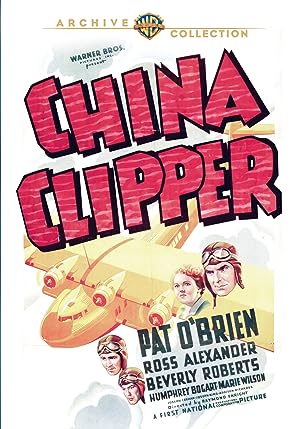 (174)
1 h 28 min1936NR
An airway bridge across the Pacific! Pat O’Brien, Humphrey Bogart and Ross Alexander in a tale of the seaplane that made the dream of trans-Pacific commercial flight a reality.

GryphonisleReviewed in the United States on November 17, 2017
3.0 out of 5 stars
Pat O'Brien's Over The Top Histrionics Crash Land What Might Have Been A Great Plane Movie.
Verified purchase
Oi! This film could have been so fun, instead it might have well as been named "Cliche Clipper". If you're a fan of early B&W talkies as I've been, you're familiar with the rapid fire dialog, the moment(s) in so many films where someone goes off on a "Gee mister, if you only understood, there are people who need this work, people depending on us, and if you just give us a chance..." a stirring speech, often with a clenched fist and very often followed by a spectacular Busby Berkeley number. In this film it never stops. Pat O'Brien, who plays something of the role of Juan Tripp, the founder of Pan Am. Given the exigencies of Depression Era story telling, there is no Boeing, no Martin, and no Sikorsky only Duncan's very old dad (Duncan being Tripps movie name) who designs all the planes and everybody from bankers to plane designers to even old Dad gets the pep talk or the rousing speech. Bogart is on the cusp of stardom---here he has got his role down, his look, his persona everything but the star role which is just around the corner.

There are some great plane shots, especially when they finally get to the China Clippers and San Francisco (Alameda). There's a strange shot where the plane takes off, flies over the Ferry Building and then, oddly enough is then shown flying west over the Bay Bridge, which is east of the Ferry Building... But in my mind I kept humming "Rio...flying off to Rio" because the music was missing. Or the Lindbergh film where Jimmy Stewart tries to stay awake as the Spirit of St Louis makes the long Atlantic solo crossing.

On the other hand, there is lots of silence. Good scenes that are allowed to unfold in front of the viewer with the viewer trusted to interpret the data correctly---today a John Williams score or clone of one would be blasting out of the speakers driving us to where the director wants us to go, no trust whatsoever.

You could clean the house or cook a meal or do all sorts of things with this in the back ground. As a sit down and watch it's a bit of a stretch, unless of course you're snowed in and have absolutely nothing to do and your satellite dish is out.

JeffReviewed in the United States on August 14, 2014
4.0 out of 5 stars
A Nostalgic Look At The Early Days of A Fictional Growing Airline.
Verified purchase
This is a fun movie typical of the drama of the mid-1930's. China Clipper is a fictional tale of a start up airline that by all appearances is Pan-Am Airlines. "Dave," played by Pat O'Brien is the leader of all small group of friends from WW1 who struggle and sacrifice to start a small airline with only one plane.

As their tiny little airline grows through the struggles of financing, logistics of foreign flights, hurricanes and good old government red tape, Dave turns into a rabid task master. Sacrificing his marriage and all else as relentlessly works to grow this once small airline into a giant international conglomerate, speeding passengers through the skies of South and Central America with the goal of crossing the mighty Pacific Ocean.

As a classic movie lover, this movie is fun to watch on a rainy day when you are stuck inside, or just want to sit back and shed the stress of the day.

As an airplane lover it is fun to see old planes that have long since disappeared, hopefully a few having been preserved somewhere. This movie contains an abundance of Pan-Am Aircraft filmed flying through the skies of South America including a lot of scenes showing the exterior and brief glimpses of the cockpit of the original China Clipper as it takes off and flies around the San Francisco Bay area. There is a beautiful shot during 1935 (?) of the original Bay Bridge still under construction (correct me if I'm wrong) as well as Fishermans Wharf and of course the Golden Gate Bridge. Those scene alone where worth watching the whole movie.
10 people found this helpful

Donald M. BishopReviewed in the United States on August 14, 2015
4.0 out of 5 stars
A Hollywood portrayal of a great period in the development of international airlines
Verified purchase
Not all the engines in this 1936 aviation film ran at full power. The romantic dimensions of the plot weren’t high octane. Playing a driven airline executive, Pat O’Brien rolled, but his performance didn’t pitch or yaw. Humphrey Bogart’s great films were in the future. The scenes featuring the Martin M-130 China Clipper flying boat are the highlight of the film – and there are cameos of the Sikorski S-42, the Fokker Trimotor, and other aircraft -- but this viewer wanted more.

What makes this film worth watching is its portrayal of the technical and organizational complexity of laying out the transoceanic air routes. Flying from the U.S. to China required more than a great aircraft and great pilots. There was the science and technology of radio communication, weather reporting, and establishing refueling stops for the flying boats. There was push-the-envelope design, government certification for aircraft safety, professional schooling for pilots and navigators, and venture capital. The film shows how all these had to come together, and bringing them together required aggressive management.

Pat O’Brien’s character in the film is a thinly veiled portrayal of the legendary airline executive Juan Trippe, founder of Pan American Airways. Trippe was played by Alec Baldwin in “The Aviator,” the 2004 film that followed the career of Howard Hughes. The two different portrayals of Trippe may lead the viewer to learn more about civil aviation between the wars.

MattReviewed in the United States on July 25, 2022
2.0 out of 5 stars
If you're looking for good clipper footage you can skip this.
Verified purchase
The plot is boring. Pat O'Brien and Humphrey Bogart are good but the rest of the acting is bad. The only reason to watch something like this is for footage of the Pan Am Clippers but you're going to be disappointed. There is no original footage, just a few stock newsreel clips that you've already seen. Interior shots are on cheap plywood sets. Not worth the watch.

jmcookieReviewed in the United States on January 3, 2016
3.0 out of 5 stars
Great Plane Movie
Verified purchase
Great video of the M-130 which had a wing span of 130 feet, which is interesting considering the Boeing 737 has a wing span of around 100 feet (Wikipedia), in other words, a very large plane for that day. The story centers on a somewhat obsessed businessman (Pat O'Brien) who stops at nothing to succeed. I found the main character (Pat O'Brien) a little repulsive a couple of times in the movie when berating his wife and his employees. I thought Pat O'Brien came across as a little too obnoxious in his role, although he is considered to be one of the top actors of that day. Having an ambivalent reaction to this movie, loving the story of plane but disliking a somewhat tyrannical businessman, I give the movie only three stars.
5 people found this helpful

M. JacksonReviewed in the United States on November 4, 2020
4.0 out of 5 stars
A Nice Surprise.
Verified purchase
Another Warner Brothers programmer. I'm not sure if it is officially a B movie--it was made on a lower budget, but no matter, it's an unusual story about air flight with interesting characters and good acting. Especially good is Ross Alexander, who gets to display his serious dramatic side as well as his very good comedy skills. Bogart shows up as an added surprise in a small supporting role.

novaman83Reviewed in the United States on December 17, 2021
5.0 out of 5 stars
Great Vintage Movie
Verified purchase
This movie dates from 1936. It was a simpler time and this story is told simply and directly without CGI. Refreshing!
It is great to see Humphrey Bogart and Pat O'Brian when they were young and working under the studio system. The beginning of the golden age of Hollywood!

BibliophileReviewed in the United States on April 20, 2021
5.0 out of 5 stars
Love this film!
Verified purchase
This is a film that I liked a lot. There are no subtitles but the actors (in 1935) spoke distinctly enough so that my hard-of-hearing friend who prefers subtitles was able to enjoy it fully.

To me the star of the show was the Martin M-130 flying boat. Much eye candy of it! Also, good documentation of the Pan Am Pacific bases - destroyed in 1941 by the Japanese after Pearl Harbor.

Interesting too to see Humphrey Bogart in an earlier role.
See all reviews
Back to top
Get to Know Us
Make Money with Us
Amazon Payment Products
Let Us Help You
EnglishChoose a language for shopping. United StatesChoose a country/region for shopping.
© 1996-2022, Amazon.com, Inc. or its affiliates