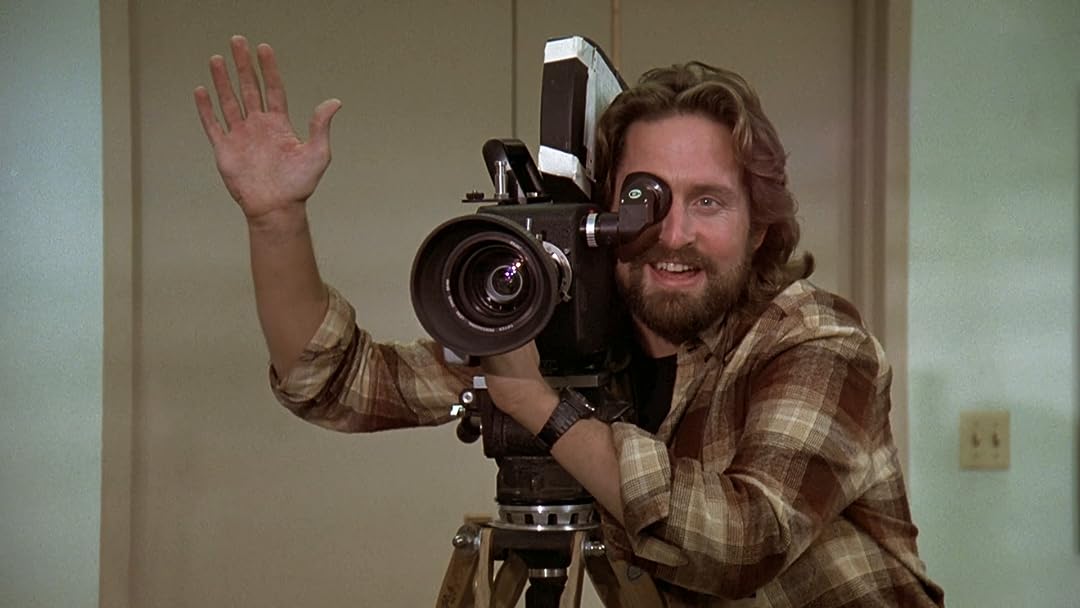 Gisela HausmannReviewed in the United States on November 20, 2017
5.0 out of 5 stars
It's a modern Shakespearean tragedy.
Verified purchase
I first watched this movie in 1979 in Austria where I lived at the time. Then, there, the topic was explosive. Not even a year earlier, in a referendum, 50,47 % of Austrians voted against operating the nuclear power plant Zwentendort, Austria.
Which is why "The China Syndrome" received enormous attention, it played in front of a sold-out audiences, for weeks.

That interest got revived when only seven years later, on 26 April 1986, the Chernobyl disaster happened, more or less exactly like the movie suggested that such a disaster could happen. Of course, I never forgot the movie's powerful plot; now I rented the movie again. For my work I needed the example of a movie with an "ordinary hero" who is also a tragic hero.

To me that's Jack Lemmon as Jack Godell.

Still, never mind how much excellent research "The China Syndrome" presents, in actuality it's a movie about people - good people!

Jane Fonda's Kimberly Wells, a hot-looking, ambitious female TV reporter who wants to move beyond "soft community stories with a heart."
By chance, at the nuclear power plant when the plant goes through an emergency shutdown (SCRAM) Kimberly knows that this is "her story," but, she also wants to keep her job. The station didn't hire her for her reporting skills, but for her looks. All signals are turned to "Do not talk about this incident."

Michael Douglas's Richard Adams, Kimberly's excellent cameraman is a man with a mind of his own. He is the only character who does not think "my job comes first." Adams secretly records the SCRAM event and also steals the film when the TV station does not want to air the material. Douglas' character's actions force all news people to follow his lead, because he acts like a renegade.

Wilford Brimley plays Ted Spindler, Jack Godell's best friend. Though, through most of the movie he obeys the power plant operators' commands because he worries about his job, at the end of the movie, after the catastrophe happened, he goes on record, on live-TV and delivers the doubt Kimberly Wells thinks everybody at the plant should have/feel.

These and other fine performances are dwarfed by Jack Lemmon as Jack Godell. Humanity at its best.
Shift Supervisor Jack Godell loves this("his") nuclear plant. "... I love this plant. It's my whole life." When after the first "incident" he finds out that that the welding X-rays are copies, hence possibly or even likely the plant is not safe, he will take action.

Lemmon's Jack Godell is a man who does the right thing, always. He touches a nerve in all of us makes us hope that all people who work critical jobs are "Jack Goddells" yet we know it isn't so.
Even the move plants doubts, Jack Goddell seems to be one of a kind.
And, Goddell gets shot and killed.
It's a modern Shakespearean tragedy.

Brilliant. Moving. Riveting, never outdated, 30 years after the movie was released.
The movie reminds us that we have to think for ourselves and take action.

Napoleon0469Reviewed in the United States on April 1, 2021
5.0 out of 5 stars
One of the twenty best movies of all time
Verified purchase
I've flirted with buying this movie for years, not buying it because of my dislike of Jane Fonda, but I have to give credit where credit is due. Her performance is stellar, and for two hours I saw only Kimberly Wells. The performances of all the characters, Jack Lemon, Michael Douglas, Wilford Brimly and all the others were convincing. From the first minute you are not watching characters, but people.

The topic, the safety of nuclear power plants and what happens after a nuclear accident, is germane even today. How the characters, even for the protagonists, work through their personal and professional responsibilities is remarkable .

I won't spoil it for you, but you won't be disappointed (even if you dislike Jane Fonda, lol). It is well worth the price to pay for two hours of drama, and at times, sheer terror because believe me, there's nothing more terrifying than an angry nuclear reactor.
2 people found this helpful

Jaime ContrerasReviewed in the United States on June 3, 2021
5.0 out of 5 stars
Stunning dramatic thriller
Verified purchase
This masterfully-crafted thriller about an accident ateh Ventana Nuclear Plant that is witnessed by an invited tv crew, reporter Kimberley Wells (Jane Fonda); cameraman, Richard Adams (Michael Douglas); and soundman,Hector Salas (Daniel Valdez). Despite claims that all is well, Richard secretly records the event. They are stopped in many ways to air the event and soon find themselves evading personnel from the parent company of the nuclear plant and the tv station heads, Don Jacovich (Peter Donat) and Mac Chrurchill (James Karen). The drama is escalated when Jack Godell (Jack Lemmon), the plant control room supervisor raises his concerns and reaches out to Kimberley. Despite sandbagging from plant supervisor, Herman DeYoung (Scott Brady); plant PR director, Bill Gibson (James Hampton); control room specialist, Ted Spindler (Wilford Brimley) and the company CEO, Evan McCormack (Richard Herd), the reporter, cmaerman, and supervisor continue to pursue the truth. There is many tense moments and superior acting in this film. Fonda and Lemmon received Oscar nminations for their performances.
One person found this helpful

JC DentonReviewed in the United States on May 16, 2020
5.0 out of 5 stars
Hard to believe this came out before Three Mile Island
Verified purchase
Nuclear power is *powerful.* It's a technology that must be respected and forgives few mistakes. While a reactor isn't going to bore through the earth, it can still produces devastating consequences when it's not built and/or maintained properly. Jack Lemmon knows something's amiss as shift supervisor, but will his intuition and knowledge be listened to? Tune in to find out!
4 people found this helpful

Mrs B GillReviewed in the United States on July 13, 2020
5.0 out of 5 stars
Showed this to my journalism class
Verified purchase
A good film for middle school journalism class, relevant topic, ethics, and journalism.
6 people found this helpful

crafty erikaReviewed in the United States on August 16, 2017
3.0 out of 5 stars
Not the complete movie
Verified purchase
This isn't the complete movie. Where is the part where Jane goes into the reactor room and realizes her suit has been torn and where is the scene where the poorly done weld is discovered?
15 people found this helpful

dawkins jrReviewed in the United States on May 14, 2018
5.0 out of 5 stars
Classic 70's Thriller
Verified purchase
I saw this when it was originally released back in '79 shortly after the Three Mile Island incident, so it was definitely timely. Still holds up today as a solid thriller...whether you're pro- or anti-nuke, you should be able to enjoy CS as a solid thriller. The lack of a musical soundtrack works well, making the film seem more real and increases the tension.,
7 people found this helpful

Give PoetryReviewed in the United States on October 12, 2019
3.0 out of 5 stars
Made for Its Day?
Verified purchase
If people felt these movies rated even a 4 or 5 in those days, I feel sorry for the people. The plot could have easily gone much deeper for all the real fears in the 1980's and the script wasn't in the least, sophisticated. Granted, dated material like this film have no special effects, but there weren't even any simple or expected effects worthy of the grand idea - problems at a nuclear power plant! It shouldn't cost more than a dollar to rent because the plot didn't leave room for much more than mediocre acting. It is however, interesting to watch these actors in their youth.
One person found this helpful
See all reviews
Back to top
Get to Know Us
Make Money with Us
Amazon Payment Products
Let Us Help You
EnglishChoose a language for shopping. United StatesChoose a country/region for shopping.
© 1996-2022, Amazon.com, Inc. or its affiliates