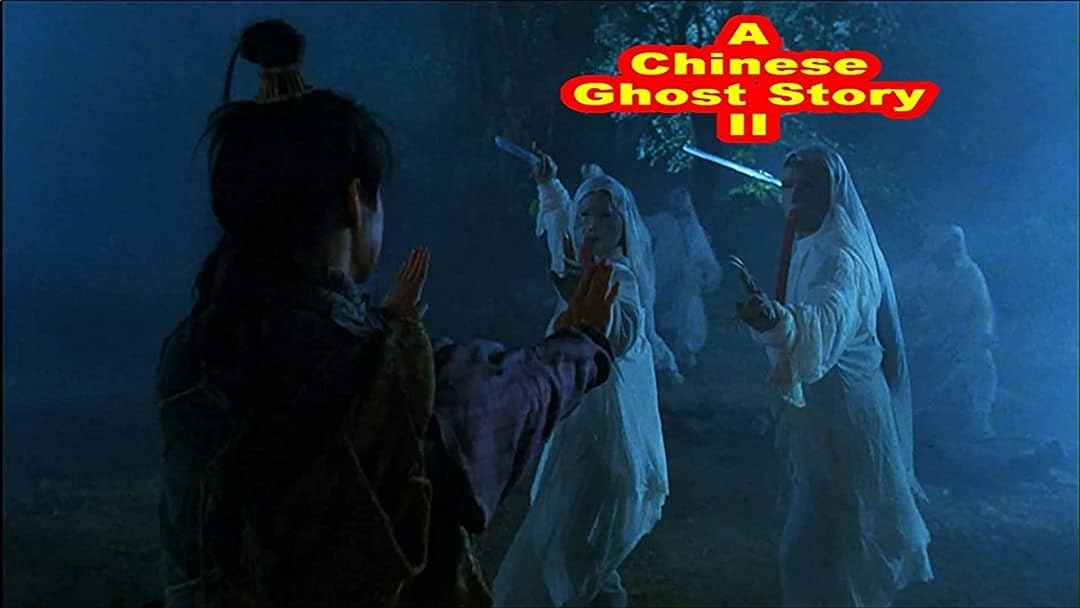 Sean WanderseeReviewed in the United States on December 29, 2021
5.0 out of 5 stars
In the Sequel the Demons Are Always Bigger
Verified purchase
Leslie Chung returns to his home to find it over run with cannibals, that is what you call a homecoming and sets out on another wild adventure. This is a great sequel, everything is bigger, you have multiple huge handcraft demons, you have court intrigue, you have two Taoist masters, more battles, more craziness, more of what you want from a Chinese Ghost Story movie. It moves a lot faster from the outset you have our hero being chased by cannibals and then you get battling the first demon, then court intrigue, then the big battle to the death with the giant centipede. I love the giant centipede, it isn’t as spit and polished as Godzilla but it looks so cool. The movie rarely slows down, the first movie was more a celebration of the old school of Hong Kong film making with musical numbers, sword fights, a little philosophy, romance, and a monster this is more in tune with 80s Hong Kong cinema of foot on the gas peddle the entire time. It has familiar faces, granted it needed more Wu Ma but a lot of movies can say that, but it is different enough to be its own film. You really don’t need to have seen the first film to enjoy this, it just adds an extra layer if you have. Great fun, a wonderful example of thrilling Hong Kong film making. Now if you’ll excuse me I need to find a very large shoe just in case I run into a centipede demon

C. K. WongReviewed in the United States on August 25, 2020
4.0 out of 5 stars
This movie is a thinly veiled satire and heart-breaking criticism of China under the Communist Party
Verified purchase
As a love story and art of film making, the original "A Chines Ghost Story" is better. The original is pure love story and supernatural folklore fantasy. It is also available on Amazon. However, this sequel was made shortly after the 1989 Tiananmen Square Massacre and is a thinly veiled satire and heart-breaking criticism of China under the rule of the Chinese Communist Party. For people who knows Chinese language and culture, the reflection of government and culture in China is obvious. E.g. the scholar who appeared in the beginning of the movie who stayed in jail to write. His account of his doomed fate as a scholar is an accusation of the fate of honest scholars and intellectuals with conscience in China. The lyrics are heart-aching laments of the state of society in China. Those songs are banned in China now.
2 people found this helpful

RickReviewed in the United States on August 23, 2020
4.0 out of 5 stars
Second in the series.
Verified purchase
Like in American cinema, everybody loves a sequel. You really have to see the first movie "A Chinese Ghost Story" to fully understand this one. What I said in my revue of the first movie still holds true here. Lots of cheesy special effects, over the top acting, Kung Foolery, etc. However I think this one has a little more romance in it. Still a fun and enjoyable watch.
One person found this helpful

YUWA CHANReviewed in the United States on August 23, 2020
5.0 out of 5 stars
Classics
Verified purchase
This classic movie by late Leslie Cheung and goddess Joey Wong from Hong Kong golden age is still more watchable than the newer crap and garbage they put out nowadays.

Amazon customer Reviewed in the United States on November 6, 2020
5.0 out of 5 stars
My most Favorite Leslie Cheung movie.
Verified purchase
This is one of my most favorite movie acted by Leslie Cheung. He really showed the audience a naive and sincere young man during that messy period of time in the movie.

B&S About MoviesReviewed in the United States on May 7, 2021
3.0 out of 5 stars
Fun sequel
1990’s A Chinese Ghost Story II starts with Ning and Yin parting ways, with Ning heading back to his hometown that has been overrun with cannibals. After being jailed and condemned to die, an ancient scholar reveals that he has dug an escape tunnel. He gives Ning a book and a pendant, then shows him the way to freedom.

In this film, Ning joins with Autumn (Jacky Cheung) and the rebel sisters Windy (Joy Wong) and Moon (Michelle Reis) to battle a demon that has taken over a mansion. And by demon, a mean a gigantic centipede that requires fighters to separate the souls from their bodies to defeat it.

Recently, Apple pulled the theme song of this movie from the Apple Music Store, as it features a reference to the massacre at Tiananmen Square Massacre:

“The youth are angry, and heaven and earth are shedding tears,

How did the rivers and mountains become a sea of blood?

Why would Apple pull a song that rightfully condemns China for their role in killing protesters? Well, you know how money works.

CielReviewed in the United States on May 6, 2021
4.0 out of 5 stars
ok
ok
See all reviews
Back to top
Get to Know Us
Make Money with Us
Amazon Payment Products
Let Us Help You
EnglishChoose a language for shopping. United StatesChoose a country/region for shopping.
© 1996-2022, Amazon.com, Inc. or its affiliates