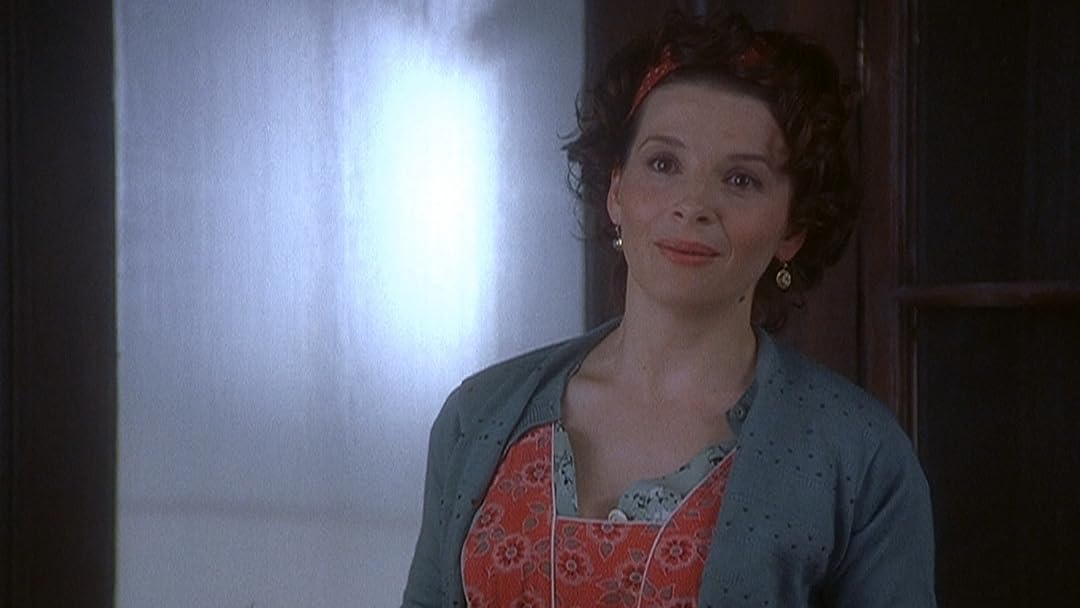 (6,977)
7.32 h 1 min2001X-RayPG-13
Johnny Depp and Juliette Binoche star in this deliciously sexy and sweet romantic comedy, that swept audiences off their feet and earned 5 Oscar® nominations including Best Picture, centered around a chocolate shop in a small French village.

C TruxlerReviewed in the United States on December 20, 2018
5.0 out of 5 stars
Chocolat Sheds Light from Girl's Eyes
Verified purchase
While many would give Chocolat a 5 star rating simply because Johnny Depp stars in the film, that would do a great injustice to Depp and the film. This is not a flimsy image on a screen that will crumble under the weight of scrutiny. Chocolat view stems from a girl's tale from a portion of her life with her mother and the prejudice that is faced by the duo when moving to a small town.

The film covers domestic abuse, prejudice, religious faith gone wrong and redemption, life and death. It is a story of exclusion and inclusion. Depp's character is a wanderer who travels with others such as himself. On close view, his character wanders as a way of life, not because he or the others are lost, which coincides with the girl's mother moving them from town to town.

The characters are rich, relatable , and carry the sometimes precarious and heavy story-line easily. Those wanting a straightforward romance, as one might interpret the photo on the film case, will come away feeling cheated. This is not simply a romance. In fact romance takes a backseat in this movie to the social importance of the trials each of these characters face. If a viewer is, however, looking for a movie that is both enjoyable and deeper than the surface perhaps gives away, than this movie is a joy for such a viewer.

meReviewed in the United States on December 26, 2021
5.0 out of 5 stars
LOVE THIS FILM - ONE OF MY ALL-TIME FAVORITES
Verified purchase
Being raised in a culture where christianity means looking down your nose and judging others, this film is the perfect sample of how people who reject modern christianity can often be more Christian than the people that warm the benches in the churches on Sunday mornings.

Great cast, wonderful music, beautiful location...etc.. I have to have chocolate when I watch it.

Tiffany MichaudReviewed in the United States on November 15, 2019
5.0 out of 5 stars
Loved this movie!!
Verified purchase
I had no idea about this movie. I first heard about it when my husband and I were listening to the Film Symphony Orchestra on YouTube. There was this really catchy song and we wondered where it was from. We saw the name 'Chocolat' and I looked it up. I was interested in it from the start because of the music we just heard, then I saw it had Johnny Depp in it. I thought, "This has to be a great movie". I read what the movie was about, and I wanted to get it to watch it. I loved this movie!! It is a great movie!! Now it is time to have my husband watch it with me. I suggest you add this movie to your movie library. It is a wonderful movie. It was very well made.
15 people found this helpful

Amazon CustomerReviewed in the United States on June 29, 2021
1.0 out of 5 stars
US Customers-DO NOT BUY
Verified purchase
DO NOT BUY FROM THIS DEALER. THEIR DVD'S DO NOT WORK IN THE US. I ordered this DVD with a bunch of DVD's for a Christmas gift for a special needs person, and at the time there was NO disclaimer that it does not work on DVD players in the US. I gave it to her, and she couldn't figure out how to play it. By the time I could get it back with this Pandemic since we couldn't see her, it took 5 months. We tried a different DVD player, even bought a new one. Someone just explained to us what the problem was. Turns out it is the wrong region. There's 1 and 2. And now they do have a disclaimer. You can ultimately play it but when you change your DVD setting, it freezes in the last region set after 5 times. So you can not use your DVD player again for any other movies for your region. I sent a message to the seller for a refund since the movie has never been played. They would not return or replace the movie. Not worth the hassle or time. Walmart sells tons of movies you can actually play for similar prices, some times cheaper.
7 people found this helpful

Momof5.0Reviewed in the United States on February 14, 2017
5.0 out of 5 stars
Fantastic Chick Flick!
Verified purchase
Ladies grab some wine and chocolate because this movie is perfect for those rainy days alone or that "time of the month" where you just want to stay in bed and avoid everyone. I love the humor and magic in it. And I actually was inspired to try making a chocolate gravy.....it was awesome by the way and amazing with croissants. This movie is my default along with quite a few others that once I begin watching my husband knows he has two choices...join me for a snuggle or go away.
19 people found this helpful

R. D. AndersonReviewed in the United States on May 28, 2022
4.0 out of 5 stars
okay quirky movie
Verified purchase
I like juliet binoche and johnny depp in this one. Its just a quirky little story about a town with strong beliefs and don't really like change and the chocolatier shows up and puts a little spice in their lives. I had to revist this now cause when I saw a long time ago, i thought it was just so so but hey, when you get older, you pay more attention to themes and ideas that are in film that you might have missed before.
One person found this helpful

ArcheonReviewed in the United States on November 1, 2018
5.0 out of 5 stars
One of the best movies ever!
Verified purchase
One of the best movies ever! Actors are the best - some award-winners there too. The direction was delightful, playful and enough drama to keep you interested for the outcomes through the twists and turns. The sensuality was wonderful and refreshing - I guess we have to go to France for that! The Mayan 'flavor' is excellent and wonderful to see portrayed in an esoteric but light way. I recommend this movie often to my clients who need to grow around integrating their heart with their sensuality and passions and the responsibility needed for happy outcomes. Rachel Portman's score is delightful, passionate and playful, just like her score for the movie "Sirens". Enjoy!
7 people found this helpful

Rolando V. ArangoReviewed in the United States on February 4, 2015
5.0 out of 5 stars
Chocolate, a delicious film to be enjoyed time and again.
Verified purchase
A lovely French allegorical story of adventure and tolerance of those that do not share our views and values. The acting is tops, the sets delicious and the little village just the right place for the setting. The music composed for this film is typical French romantic, they type you would imagine taking place in Paris.

The main characters, Johnny Depp (Roux), Alfred Molina (Comte de Raynaud), Juliette Binoche (Vianne) , Judy Dench (Armanded Volzin), Lena Olin (Josephine Muscat) and Carrie-Ann Moss as Caroline Claimant, are superb in their respective roles. However, Kudos go to the young actress Victoria Thivisol who plays Vivianne’s daughter (Anouk Rocher )who is constantly adapting to their nomad existence until she causes the final change by accidentally breaking the urn carrying her grandmothers magic ashes, which made them wonder the world.

The story is one of control and intolerance of strangers those that do not share our values. The Comte de Raynaud is the town’s mayor and patrician from a long line of privileged ancestors. He is so strict that even his wife left on a “vacation” never to return. Vianne and her daughter Anouk are unconventional and do not share the mayor’s strict observance of Easter and of the required church attendance and mounts an attack on Vianne and Roux, the Gypsy only to fall for the magical powers of Vianne’s chocolates. It all ends with an understanding and acceptance of their differences. A charming story that applies to today’s troubled times. I give the film five golden stars.