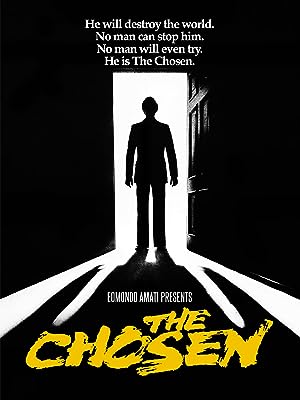 (53)
1 h 42 min1978R
Industrialist Robert Caine's dream of building a nuclear power plant in the Holy Land becomes a horrific nightmare when people associated with the project meet violent, gruesome deaths. The signs point to the work of the devil himself...and Caine comes to a terrifying realization that he may be linked to the Antichrist--perhaps in the form of his unborn child.

Jeffrey L. WilsonReviewed in the United States on August 17, 2019
4.0 out of 5 stars
The Best of the Omen Knock Offs
Verified purchase
The Chosen, judging purely by its batcrazed trailer, is an obvious Omen knock off about a businessman who wants to build nuclear plants in an unnamed Middle Eastern country. But two things happen: 1. his construction plan seems to align with a monstrous biblical prophecy and 2. one of his kids may or may not be Satan in the flesh.

Thankfully, some creative kills and bizarre imagery elevate The Chosen above being a complete knock off and complete schlock. This 70s era horror gem is worth the price of admission.

Amazon CustomerReviewed in the United States on December 15, 2019
2.0 out of 5 stars
Thriller
Verified purchase
How many movies in the 70's is about the anti Christ. This one doesn't deliver as much of a punch as the others but it does have one great actor despite once again a disappointing ending like all the others

CustomerReviewed in the United States on March 18, 2022
3.0 out of 5 stars
Could of been better
Verified purchase
. Boring

jose santiagoReviewed in the United States on April 18, 2020
3.0 out of 5 stars
holocaust 2000
Verified purchase
take the 3 omen movies and mix it togheter , that's the chosen . not bad at all.

William DeringtonReviewed in the United States on August 31, 2019
5.0 out of 5 stars
Great
Verified purchase
Great

B&S About MoviesReviewed in the United States on January 20, 2020
3.0 out of 5 stars
What is happening?
Of all the things the devil's done, I wonder exactly how he was able to get Kirk Douglas - KIRK DOUGLAS! - to be in an Alberto De Martino ripoff of The Omen? I mean, this is the same director who made The Antichrist and Miami Golem! What horrifying secrets does the First of the Fallen have to make one of the lead actors of Hollywood's Golden Age appear in this burst of Satanic majesty?

Holocaust 2000 (AKA the Chosen and Rain of Fire) was written by De Martino, Michael Robson and Sergio Donati, who wrote some of the script for Once Upon a Time In the West and Duck, You Sucker! as well as Orca, early Arnold vehicle Raw Deal and the original version of Man On Fire.

You gotta hand it to Robert Caine (Douglas). No matter how many people protest, no matter the fact that his wife was stabbed in front of him at a party or the killer went nuts in a mental institution and sliced his own wrists in front of him, he's not giving up his plan to build a nuclear power plant near a sacred cave in the Middle East.

He soon learns that he has bigger problems. His son Angel (Simon Ward, The Monster Club) is the Antichrist and the plant he wants to build looks just like the evil beast that the (profanity edit) of Babylon will ride at the end of the world.

Seriously, after a bit of crumpet, Caine falls asleep next to his way too young new girlfriend (Agostina Belliand, who was in the original Scent of a Woman) watches the nuclear plant rise from the sea, with multiple heads rising from the currents.

An Italian and UK co-production, this movie also features Ivo Garrani (Bava's Black Sabbath) as The Prime Minister, Alexander Knox (who nearly won an Oscar for 1944's Wilson before his liberal views got him chased out of Hollywood during the McCarthy era), Adolfo Celi (who wasn't just Emilio Largo in Thunderball, he was also the Captain in Live Like a Cop, Die Like a Man and the villainous Ralph Valmount in Danger: Diabolik), Geoffrey Keen (Minister of Defence Frederick Gray in six James Bond movies and one of the three noblemen using Dracula in Taste the Blood of Dracula), Peter Cellier (Sir Frank Gordon from yes, Prime Minister), Denis Lawson (Wedge Antilles!) and Tony Clarkin, who played a stormtrooper in the second and sixth Star Wars movies, as well as appearances in The Monster Club as a vampire and Outland.

In Europe, this movie ends with Caine living in exile with his newborn child, as Angel begins developing the plant intended to cause Armageddon. But in the U.S., Douglas returns to his company and blows everybody up real good.

katheleenReviewed in the United States on October 2, 2019
5.0 out of 5 stars
Best Of The Omen knock offs
Great deal, you get the US version under its US title the Chosen, and the uncut Euro version under the title Holocaust 2000. This is actually better than some of the actual Omen sequels, all powered along by a top notch Ennio Morricone score .
One person found this helpful
See all reviews
Back to top
Get to Know Us
Make Money with Us
Amazon Payment Products
Let Us Help You
EnglishChoose a language for shopping. United StatesChoose a country/region for shopping.
© 1996-2022, Amazon.com, Inc. or its affiliates