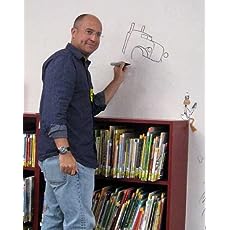 Chris Gall has been drawing pictures for as long as he can remember. When he was caught doodling on his desk in second grade, his teacher suggested that he might become an artist some day, then made him clean all the desks in the classroom. In seventh grade, Chris won a Read Magazine Young Writers Award, and that inspired him to create stories to go with his art. After graduating from the University of Arizona, Chris became an award-winning, internationally recognized illustrator, and his artwork has been shown in almost every publication in America, including Time, Newsweek, People, Fortune, The New York Times, and The Washington Post.

In 2004, his first picture book, America the Beautiful, became a Publishers Weekly Best Children's Book of the Year, and his career in children's publishing began. Since then he has authored and illustrated eleven more books, including the acclaimed Dinotrux, a 2009 Publishers Weekly Best Children's book, Dog Vs. Cat, Revenge of the Dinotrux, Awesome Dawson, and Substitute Creacher. In August of 2015 Netflix began airing Dinotrux, an animated television series produced by DreamWorks.

Chris has also worked as an adjunct professor of art at the University of Arizona and spent four years as a professional stand-up comedian. He currently lives in Tucson, Arizona. 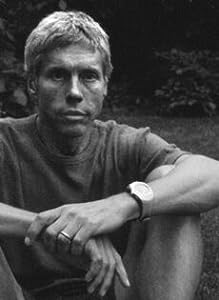 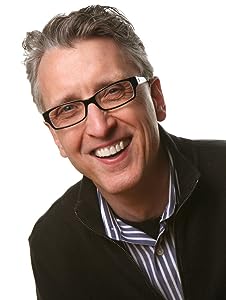 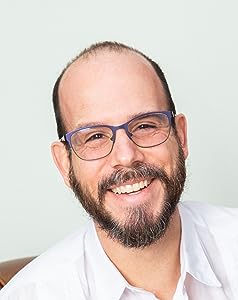 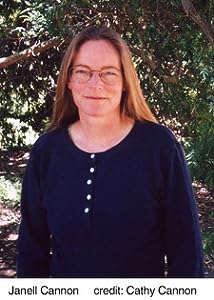 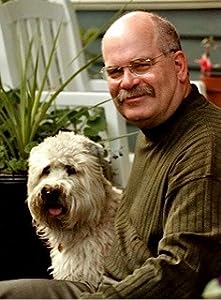 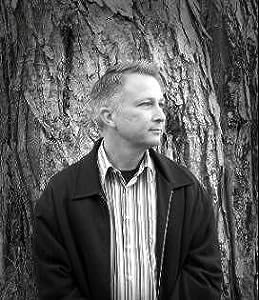 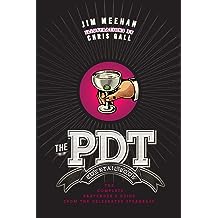 The PDT Cocktail Book: The Complete Bartender's Guide from the Celebrated Speakeasy Nov 1, 2011
by Jim Meehan , Chris Gall
( 390 )
$10.99
Beautifully illustrated, beautifully designed, and beautifully crafted--just like its namesake--this is the ultimate bar book by NYC's most meticulous bartender. To say that PDT is a unique bar is an understatement. It recalls the era of hidden Prohibition speakeasies: to gain access, you walk into a raucous hot dog stand, step into a phone booth, and get permission to enter the serene cocktail lounge. Now, Jim Meehan, PDT's innovative operator and mixmaster, is revolutionizing bar books, too, offering all 304 cocktail recipes available at PDT plus behind-the-scenes secrets. From his bar design, tools, and equipment to his techniques, food, and spirits, it's all here, stunningly illustrated by Chris Gall.
Read more
Other Formats: Hardcover 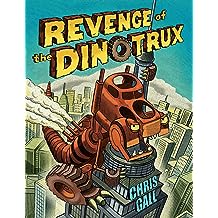 Revenge of the Dinotrux Mar 17, 2015
by Chris Gall
( 196 )
$9.99
The second book in the rip-roaring mash-up of dinosaurs and trucks that inspired the Netflix TV series!

Millions of years ago, DINOTRUX ruled the earth. But in the present day, people rule them! Their rusty fossils have spent decades stuck in a drafty museum surrounded by screaming kids, and now they're ready to break out and let off some really old steam.

HONNNK!!! DINOTRUX ARE ON THE LOOSE!

Garbageadon eats cars, Craneosaurus peeks in windows, and Tyrannosaurus Trux climbs a skyscraper... Who will win the mighty standoff between man and prehistoric beast? Find out in this rip-roaring sequel to Chris Gall's highly praised Dinotrux, featuring all your favorite trux and some never-before-seen ones!
Read more
Other Formats: Audible Audiobook , Hardcover , Paperback , Board book 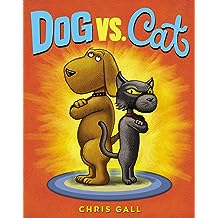 Dog vs. Cat May 20, 2014
by Chris Gall
( 118 )
$9.99
Dog and Cat do not get along. But when they're forced to share a room, they agree to be on their best behavior...until Dog won't stop sniffing. Cat won't stop primping. Dog won't stop howling. Cat won't stop scratching. And when it comes to the litter-box...sharing is not an option!
What will it take to bring Dog and Cat together? Find out in Chris Gall's comic clash that brings out the best (and worst) in two very different pets.
Read more
Other Formats: Audible Audiobook , Hardcover , Paperback 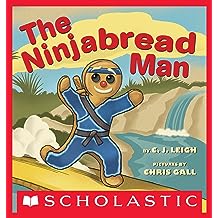 In this fun spinoff of the classic "Gingerbread Man" story, Sensei makes an age-old recipe for ninjabread. But the cookie escapes from the oven and runs loose! 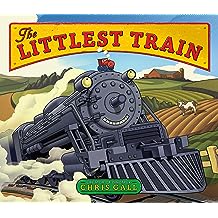 The Littlest Train Sep 26, 2017
by Chris Gall
( 53 )
$9.99
In this endearing story of a tiny toy train, the creator of the hit series Dinotrux now breathes life into more than a half-dozen trains that climb, haul, chug, zip, and zoom.

In a small room, down a short flight of stairs, there lives a little toy train...about to have a BIG adventure! There's an endless world to explore, and awe-inspiring new friends to meet. Mighty Max, Chloe Cogs, Sara Speedster, and Farley Freighter can reach all the best sights, lickety-split. But when the day is done and the sun goes down, will the littlest train find his way home? Calling all train lovers: All aboard!
Read more
Other Formats: Audible Audiobook , Hardcover , Board book 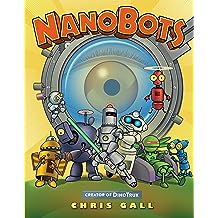 NanoBots Aug 23, 2016
by Chris Gall
( 37 )
$9.99
Introducing a team of robots powerful enough to change the world--and yet smaller than the dot at the end of this sentence!

A boy inventor creates the ultimate in high-tech superheroes that could one day save the world--but they have some smaller problems to take on first! NanoBots are tiny. They're almost too small to see, but they can each do a unique and important job: Medibot makes sure their Inventor never catches a cold.... Chewbots gobble up that gum the Inventor trampled into the carpet... Binobot scans the scene of a crime for clues the Inventor could never see... and Seekerbots explore to meet microscopic new creatures.

These bots and their high-tech friends sure make the inventor's life easier, but when the most AWESOME robot in town is in real trouble, they must band together and prove that sometimes the SMALLEST helpers can be the BIGGEST heroes! Includes fun facts about real nanotechnology in the backmatter.
Read more
Other Formats: Hardcover 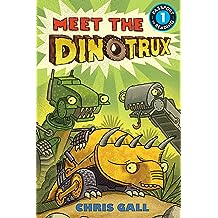 Meet the Dinotrux: Level 1 (Passport to Reading Level 1) Jan 6, 2015
by Chris Gall
( 133 )
$4.99
A Level 1 early reader that introduces kids to the Dinotrux--and will get them roaring about reading!
Includes Read-Aloud/Read-to-Me functionality where available. Also includes a Dolch Sight Words list.
Book Description:In this beginning reader, Dozeratops wants to meet new Dinotrux. But they are on the other side of the river. Can the mighty monsters work together to build a bridge? Find out in this friendship adventure, where you will learn about ten of these part-dinosaur, part-truck beasts!
Read more
Other Formats: Audible Audiobook , Hardcover , Paperback 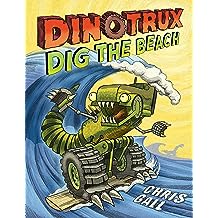 Dinotrux Dig the Beach Jun 2, 2015
by Chris Gall
( 110 )
$6.99
The third book in the original, rip-roaring mash-up of dinosaurs and trucks that inspired the Netflix TV series!

Fed up with steamy summertime Jurassic jungles, the mighty monsters are getting hot and grumpy, and they need a vacation.... Time to roll on down to the beach! Tyrannosaurus Trux might be able to "hang ten" on his surfboard, but not all of the trux feel so at home near the water. Can they organize their skills to dig up the beach and build the best sandcastle ever? Dive into the silliest, splashiest Dinotrux adventure yet to find out!
Read more
Other Formats: Audible Audiobook , Hardcover , Paperback 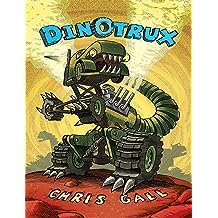 Millions of years ago, DINOTRUX ruled the earth! These mighty part-truck, part-dino demolition dynamos rumbled, plowed and bulldozed their way through the centuries. In this toddler-friendly adventure, Chris Gall guides readers on a safari through the wild world of these mechanical monsters of prehistoric times, from the nosy Craneosaurus and the mega-hungry Garbageadon to the big bully of the jungle, Tyrannosaurus Trux!

Look out for a fold-out surprise at the end! And when you're done, check out the next books in the Dinotrux series, Revenge of the Dinotrux and Dinotrux Dig the Beach.
Read more
Other Formats: Audible Audiobook , Hardcover , Paperback , Board book 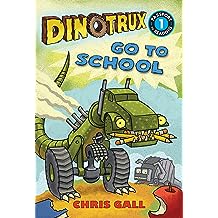 Dinotrux Go to School: Level 1 (Passport to Reading Level 1) Jul 8, 2014
by Chris Gall
( 214 )
$4.99
Dinotrux--the incredible dinosaur-truck mashups--are about to take the leveled reader category by storm!
Features:Sight Words Pages Read Aloud Functionality [where available]
Book Description:In this Passport to Reading Level 1 reader, today is the first day of school. The Dinotrux are nervous! What will they eat for lunch? Will their teacher be nice? But the Dinotrux don't need to worry. They can help each other. And school isn't scary. It's fun, especially when you are part dinosaur and part truck! 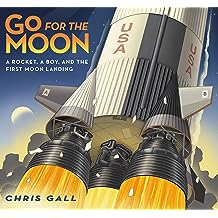 Written and illustrated by Chris Gall, Go for the Moon! captures the fascinating detail and inspiring adventure of the moon landing. It is a captivating celebration of one of humankind's greatest technical achievements and most extraordinary feats of exploration.

The Apollo 11 astronauts have prepared carefully for their attempt to be the first men to land on the moon. The young narrator of this book has prepared carefully, too: he explains the design of the spacecraft, the flight from the earth to the moon, and the drama of touching down--while shadowing the astronaut's voyage with one of his own. 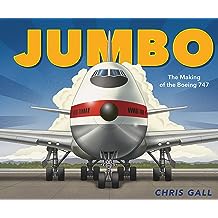 For the 50th anniversary of the Boeing 747’s first commercial flight, a picture book about the development of the iconic passenger plane and how it changed the history of air travel.

In 1968, the biggest passenger jet the world had ever seen premiered in Everett, Washington. The giant plane was called the Boeing 747, but reporters named it “the Jumbo jet.”

There was only one problem. It couldn’t fly. Yet.

Jumbo details the story of the world’s first wide body passenger jet, which could hold more people than any other plane at the time and played a pivotal role in allowing middle class families to afford overseas travel. Author and illustrator Chris Gall, himself a licensed pilot, shows how an innovative design, hard work by countless people, and ground-breaking engineering put the Jumbo jet in the air.

On January 22, 1970, the Boeing 747 made it's first transatlantic flight, taking passengers from New York to Paris in seven hours.