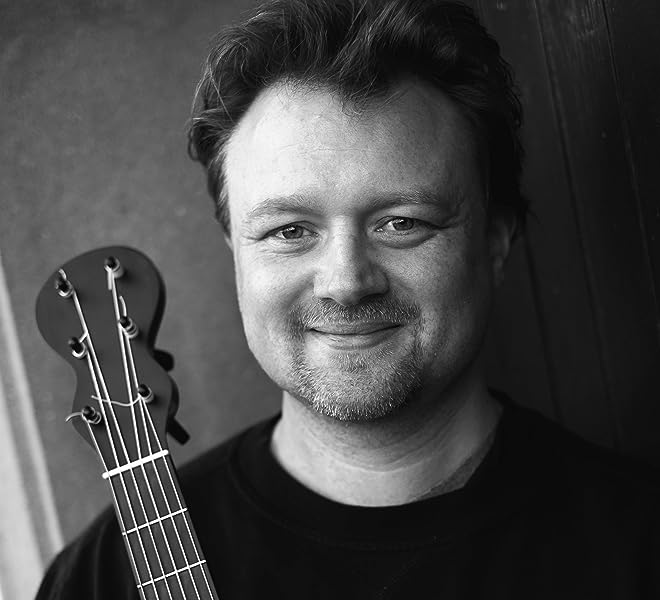 by Mr James Akers (Author), Mr Ged Brockie (Editor)
4.7 out of 5 stars 24 ratings
Book 1 of 2: Christmas Carol guitar arrangements and songs
See all formats and editions
Sorry, there was a problem loading this page. Try again.

CHRISTMAS CAROLS FOR GUITAR
Graded arrangements of 12 all time favorite Christmas songs for acoustic, fingerstyle and classical guitar players.
A collection of twelve of arguably the most well known Christmas carols and holiday season songs beautifully arranged for guitar by guitarist James Akers.
Each of the 12 songs are offered at beginner, intermediate and advanced technical versions. For beginners, start with the easy version of the song, then build up to the more complex versions which are all found in one book. This publication would also be an excellent resource for guitar teachers looking for potential material for students around Christmas time.
THE TWELVE SONGS INCLUDED ARE:
FREE DOWNLOAD OF EXTRA MATERIAL
A link is included within the book to download free extra material which accompanies the publication. Contents of the free download are:

Critically acclaimed musician Jamie Akers was hailed as 'the great Scottish guitarist' by Classical Guitar Magazine and, in a review from Gramophone, his playing was described as, 'containing all the warmth, colour and expressive richness one could hope for.' Jamie has, throughout a varied career, explored various genres of music from a historical and stylistic perspective, combining diligent research with expressive performances to communicate the continuity of musical endeavour through the centuries. Jamie was born in Scotland and began playing guitar at the age of 10. Initially playing rock and blues then attempting to play jazz and finally settling on the classical guitar, he was largely self-taught before having lessons with Robert Mackillop at Napier University, Edinburgh. Whilst at Napier he turned his attentions to playing the lute and pursued this as his principle study at the Royal College of Music, with Jakob Lindberg. Having added the Theorbo to his expanding instrument collection, Jamie completed his studies at Trinity College of Music, studying with Jacob Heringman and David Miller, with additional lessons and advice from Paul O'Dette and Elizabeth Kenny. Settled on the period instrument path, Jamie continued accumulating instruments and exploring the music of the 16th to 19th centuries, with occasional forays into contemporary music. Following a Junior Fellowship at Trinity College of Music Jamie began pursuing a varied professional career. As a soloist he has performed throughout Europe, the Middle East and Australia, giving recitals at the Edinburgh Fringe Festival, Ullapool Guitar Festival, Classical Guitar Retreat, Exeter Guitar Festival, the Yorke Music Trust, the Italian Cultural Institute, in the L'Oratoire de Lourve, and the Copenhagen Renaissance Music Festival. He has accompanied leading singers including Dame Emma Kirkby, James Laing, Miriam Allan, Claire Wilkinson and Jake Arditti and is the staff accompanist for the John Kerr memorial song prize. Jamie has performed with many early music ensembles such as I Fagiolini, Ex Cathedra, Stile Antico, the Marian Consort, Fretwork, Chelys Viol Consort, The Rose Consort of Viols, The Parley of Instruments, The Hanover Band, The Brook Street Band, Sounds Baroque and the Dunedin Consort. As a continuo player Jamie has worked for major opera companies, English National Opera, Welsh National Opera, Opera North, Longborough festival opera and Innsbruck Festival Opera and orchestras and chamber groups including The Scottish, Irish and English Chamber Orchestras, Northern Sinfonia, the Royal Scottish National Orchestra, The Ulster Orchestra, The Essen Philharmonie, The Scottish Ensemble, with trumpeter Alison Balsom, and ventured into indie folk-rock with Damon Albarn. Jamie has performed on numerous recordings; a few film soundtracks; several theatrical stages, including Shakespeare's Globe Theatre and the Barbican, and broadcast for the BBC, France Musique and RTE Lyric, Ireland, and has been an artist in residence with the renowned Scottish Ensemble. Jamie lectures in early plucked strings at the Royal Conservatoire of Scotland and teaches annually on the Renaissance Music Week course in Ejstrupholm, Denmark. He has also taught or given masterclasses at, The Royal College of Music, The Royal Northern College of Music, The Royal Welsh College of Music and Drama, the Western Australian Academy of Performing Arts and The Rostov Conservatoire, Russia.

Critically acclaimed musician James Akers was hailed as ‘the great Scottish guitarist’ by Classical Guitar Magazine and, in a review from Gramophone, his playing was described as, ‘containing all the warmth, colour and expressive richness one could hope for.’

James has released several solo recordings of lute and romantic guitar music and given recitals throughout Europe at major venues and festivals.

He lecturers on period plucked string instruments and performance practice at the Royal Conservatiore of Scotland.

Throughout his varied career James has explored music from a stylistic perspective, combining diligent research with expressive playing, to communicate the continuity of musical expression through the centuries.

4.7 out of 5 stars
4.7 out of 5
24 global ratings
How are ratings calculated?
To calculate the overall star rating and percentage breakdown by star, we don’t use a simple average. Instead, our system considers things like how recent a review is and if the reviewer bought the item on Amazon. It also analyzes reviews to verify trustworthiness.
Top reviews

Kerry
5.0 out of 5 stars I wish all guitar books followed this format with the intermediate/beginners/advanced arrangements!
Reviewed in the United States on November 2, 2020
Verified Purchase
Absolutely love this book! I decided 1 year ago to take up guitar again, after nearly 40 years, and am a a point where I need more practice materials that is easy enough for me to play, yet, challenging enough to continue growing.

This book is ideal, as it gives three arrangements for each song ... easy, intermediate, and, advanced. I find the easy arrangement to be very simple, mostly one note lines in the open position. These would be ideal for beginners who are still learning to read music notes in the first position. The beginner arrangements also include cord above the vocal lines for those who like to strum the songs.

The intermediate arrangements were more challenging, and, offer more technical challenges, more keys and timings, and 3+note cords. I found I fall pretty solidly into this category with a few still being a bit too simple, and a few still too challenging as yet. Also, I find the TAB lines are useful here for me ... a bit of a cheat perhaps ... as it let's me scan ahead to see where position changes occur that I currently have difficulty recognizing!

The advanced arrangements are mostly beyond me still and do appear to be much more complex. I was able to stagger through part of one of these, but over all, the advanced offerings were well beyond this intermediate/beginners skill level. That's ok as I have plenty to aspire to as I progress ... who knows perhaps by my second Christmas as a player, I'll be ready to tackle so.e of those advanced ones. In the meantime, the beginner and intermediate arrangements should offer plenty of skill building and enjoyable material for playing Carol's this season.

Rex Boone
5.0 out of 5 stars Best intermediate Christmas collection I have found
Reviewed in the United States on November 12, 2021
Verified Purchase
Every year I tackle the Christmas repertoire in various forms. The selections I find tend to be either too easy or too difficult. This book also includes a nice intermediate alternative for each piece. So I can pluck out the melody, strum the chords, work on the very playable intermediate version, or tackle the advanced piece with dreams of someday playing it well. Next year!
Read more
Helpful
Report abuse

Ted C.
5.0 out of 5 stars Just love his Music!
Reviewed in the United States on April 25, 2021
Verified Purchase
The Anonymous 4 is about the best group ever for this type of music. Long time fan!
Read more
Helpful
Report abuse

G. Johnston
4.0 out of 5 stars Great book
Reviewed in the United Kingdom on January 11, 2021
Verified Purchase
Really like this approach and, while I focused very happily on the advanced arrangements, it was nice to know the intermediate options were there if I wanted to 'fast track' to a complete-sounding Christmas favourite.

The advanced arrangements were imaginatively structured, with plenty of variety in approaches. I'll dust the book down next December and work on a few more.

The arrangements are all short. It might have been good to expand them just a little with some variations, and possibly even some accompaniment options if a singer or other instrumentalist wanted to get involved.

Points off for the difficulty in reading the tab due to the type setting. Serves me right for relying on tab, I suppose!

Also points off because the two-page advanced arrangements required a page turn, which could have been avoided.

All in all, really very good. delighted I purchased it.

Fi
4.0 out of 5 stars Great selection
Reviewed in the United Kingdom on January 2, 2021
Verified Purchase
Brilliant idea - each Carol has three different versions - easy, intermediate and advanced, which means that whatever stage you are at you will be able to play these.
Read more
One person found this helpful
Report abuse

Luisa C.
3.0 out of 5 stars Nice book
Reviewed in Canada on November 8, 2021
Verified Purchase
So, I was undecided whether to give this book three or four stars. Here’s why: it is a really lovely book, with brief introductions about the origin of each carol. I love the option of beginner, intermediate and advanced levels. I also really like the arrangements of the songs.

It falls short in one way that I think is rather important. There seems to be some kind of musical “economizing” so to speak. You get the short of it, verses and chorus, that’s it. The pieces don’t have even a brief musical introduction or musical spacers/bridges between verses/chorus, which I think is important musically. Too bad. Lovely in every other way.
Read more
Report abuse
See all reviews
Back to top
Get to Know Us
Make Money with Us
Amazon Payment Products
Let Us Help You
EnglishChoose a language for shopping. United StatesChoose a country/region for shopping.
© 1996-2021, Amazon.com, Inc. or its affiliates