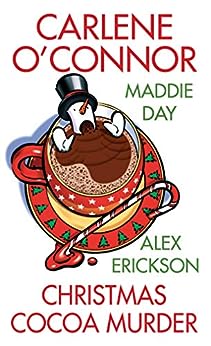 "Captivating . . . Fans of light mysteries with an Irish flavor will look forward to Siobhán and Macdara's further adventures."
-Publishers Weekly on Murder in an Irish Church Yard

"This entertaining combination of Maeve Binchy's old-world Irish charm and Janet Evanovich's roguish humor is a smart, fast-paced read. Devotees of the Hibernian mysteries of Dicey Deere and M.C. Beaton will toast this debut with a pint of Guinness. Sláinte!"
-Library Journal on Murder in an Irish Village

"It's yummy fun, but don't read it when you're hungry. Unless you're hungry for a good book, and not breakfast!"
-Suspense Magazine on Flipped for Murder

"This cozy will appeal to readers who enjoy Mary Daheim's Judith Flynn or the coffee shop setting in Cleo Coyle's Coffeehouse series."
-Booklist on Death by Tea"

Maddie Day is a talented amateur chef and holds a PhD in linguistics from Indiana University. An Agatha and Macavity Award-nominated author, she is a member of Sisters in Crime and Mystery Writers of America and also writes award-winning short crime fiction which has appeared in a number of juried anthologies. She lives with her beau and two cats in Massachusetts.

Alex Erickson has always wanted to write, even at a young, impressionable age. He's always had an interest in the motive behind murder, which has led him down his current path. He's always ready with a witty--at least in his opinion--quip, and tries to keep every conversation light and friendly. Alex lives in Ohio.

Carlene O'Connor comes from a long line of Irish storytellers. Her great-grandmother emigrated from Ireland filled with tales, and the stories have been flowing ever since. Of all the places across the pond she's wandered, she fell most in love with a walled town in County Limerick and was inspired to create the town of Kilbane, County Cork. Carlene divides her time between New York and the Emerald Isle. She is currently at work on the next book in the Irish Village Mystery series.

Amy Landon, Earphones Award-winning narrator, is a voice artist and classically trained actress with numerous film, television, and off-Broadway stage credits. Her voice can also be heard on many television and radio commercials. She has an easy facility with dialects, which she also coaches and teaches, and she is happy to find her lifelong obsession with books pairing up with her acting and vocal work. Her narration of Texts from Jane Eyre placed as a finalist for the Audie Award for Best Humor Narration in 2016.

4.4 out of 5 stars
4.4 out of 5
186 global ratings
How are ratings calculated?
To calculate the overall star rating and percentage breakdown by star, we don’t use a simple average. Instead, our system considers things like how recent a review is and if the reviewer bought the item on Amazon. It also analyzes reviews to verify trustworthiness.
Top reviews

B. Foerst
5.0 out of 5 stars A Trio of Christmas Stories
Reviewed in the United States on October 2, 2019
Verified Purchase
CHRISTMAS COCOA MURDER – This story is set in Ireland where apparently each town has their own Santa. The Santa in this town seems to have a lot of problems ending in his murder. Siobhan who is soon to be a garda is able to solve this mystery. I was not familiar with this series and felt I was missing some of the story.

CHRISTMAS COCOA AND A CORPSE - Robbie is the owner of a small restaurant in northern Indiana. The restaurant is busy plus the stocking stuffer items including cocoa are selling like hotcakes. The night after dinner with friends, Jed Greenberg is found dead. The cause of death is unknown but the police suspect possible tampering with Robbie’s cocoa. I thoroughly enjoyed this story.

DEATH BY HOT COCOA – This story is set in an escape room. I found it particularly interesting as I don’t know a lot about escape rooms. Great story.

Amazon Customer
5.0 out of 5 stars Great so far
Reviewed in the United States on January 6, 2020
Verified Purchase
I’ve only read Alex Erickson so far as I just finished his 7 book (so far) Bookstore Care Mysteries. I’m hoping there will be many more books in the series. I have thoroughly enjoyed the first seven plus this one. I’ll read the other two in this book as I read their series.
Read more
One person found this helpful
Helpful
Report abuse

Meru
5.0 out of 5 stars Nice Read
Reviewed in the United States on February 26, 2021
Verified Purchase
I really enjoyed the stories. The first author I was unfamiliar with but enjoyed the story. The other two are authors I read. My only problem was in trying to figure out where they fit in with the other books
Read more
Helpful
Report abuse

metaldude30236
4.0 out of 5 stars Enjoyable
Reviewed in the United States on September 25, 2019
Verified Purchase
To be honest, I only read the Carlene O'Connor story, but I thought it was a great addition to the overall series.
Read more
2 people found this helpful
Helpful
Report abuse

April
5.0 out of 5 stars Christmas books
Reviewed in the United States on June 13, 2020
Verified Purchase
I really liked the first Irish book . The second book was ok, the third was also ok, but not really my interest.
Read more
One person found this helpful
Helpful
Report abuse

Pat haven't read these yet
5.0 out of 5 stars Looking for the next book.
Reviewed in the United States on April 8, 2021
Verified Purchase
Just started reading this one. Will let you know when I'm finished Pat
Read more
Helpful
Report abuse

Marvin Wilson
5.0 out of 5 stars Three Christmas mysteries in one!
Reviewed in the United States on December 24, 2020
Verified Purchase
All had strong plots for such short stories. Easy reading during a short Christmas break. I highly recommend this book to cozy fans.
Read more
Helpful
Report abuse

Kindle Customer
1.0 out of 5 stars A disappointment forme
Reviewed in the United States on October 3, 2019
Verified Purchase
I was disappointed. The only story I found worth reading was the first one
Read more
Helpful
Report abuse
See all reviews

G. Hutchins
5.0 out of 5 stars Lovely read.
Reviewed in Canada on December 18, 2020
Verified Purchase
Delightful read .
Introduced me to Maddie Day as an author.

Tags that will help you discover similar books. 8 tags
anthologieswomen sleuthschristmasmystery, thriller & suspensecozy mysteryunited statesgenre fictionliterature & fiction
Results for:
Page 1 of 1Start overPage 1 of 1
Previous page
Next page
Where do clickable book tags come from?
Book tags are created from a variety of sources, some of which are customer-generated. Amazon is not legally responsible for the accuracy of the tags represented. If you are an author or publisher and would like to remove a tag associated with your title, please contact your vendor manager or publisher support team.
Back to top
Get to Know Us
Make Money with Us
Amazon Payment Products
Let Us Help You
EnglishChoose a language for shopping. United StatesChoose a country/region for shopping.
© 1996-2021, Amazon.com, Inc. or its affiliates