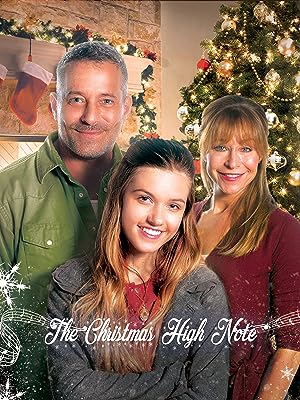 (13)
5.11 h 25 min20207+
When Rachel volunteers to help a stage-frightened teenage girl hit the high notes of "Hark! The Herald Angels Sing" for her Christmas pageant solo, she falls in love with the girl's widower dad Michael, just as Rachel's ex stirs up complications for the holiday.

H. BalaReviewed in the United States on January 31, 2022
3.0 out of 5 stars
a Christmas low note
To demonstrate her raspy vocal chops, Jamie Luner does have a scene early on where she's on the piano and singing. Luner co-produces and stars in the Lifetime movie, The Christmas High Note. She plays Rachael, a part-time music teacher who helps out at her dad's veterinary practice. But the times, they are a-changin'. His dad (William Katt) is lookin' to sell the vet clinic and retire. Once that happens, Rachael plans on opening a music store and teaching music full-time.

Not to get all Jerry Springer up in here, but Rachael's dad harbors a crush on Rachael's boyfriend's mom, which is a bit awkward. So maybe it's a good thing that, after four years of dating Brad, Rachael finally has had it with his always standing her up. The latest snub takes place on their fourth year anniversary when Rachael was kept stewing all by herself at the restaurant.

With Brad Thomas out of the picture, it doesn't take long for Rachael to notice Michael who works the bar at his sister's diner. Not that Michael Pryor (Johnny Messner) wants anything to do with a new relationship. He's still not ready. He's guarded. He's an English teacher, and I'm guessing he and his students are on holiday break. Much of Michael's focus right now lies in helping his sister Emma (Kassandra Clementi) at her diner and raising his 13-year-old daughter, Sophia (Madeline Grace).

But it's his wanting to help out his kid that leads him to Rachael. Sophia is stressing out about the coming Christmas Eve pageant in which she'll have a singing part. She's having trouble hitting that elusive E note. When Rachael was so nice in offering her vocal coaching services, you'd have to be a dirtbag parent to not take her up on it. Anyway, the three of 'em start spending time together. Rachael and the teenager begin bonding. Sparks begin sparking between Rachael and the dad. And just as you were wondering where the dramatic conflict would come from - Bam! - "The Brad is back!"

What makes this movie watchable? Not much. Primarily, it's the teenaged girl who has a good voice, but not a great voice. It sucks that Johnny Messner can't carry a tune, because he has a phenomenal, sort of gravelly speaking voice. On the positive, we get a side helping of Kassandra Clementi as the sister, and I like how chill she is. The movie does her no favors by giving her character an unnecessary love interest.

Here's the thing. It seems that part of the movie sincerely wants to tell a good story. There are thematic threads weaving thru the plot about a person's insecurities and about putting up a wall instead of reaching out. Those areas could've been explored deeper. But there's another part of the movie that's content to pander to dumb, lazy storytelling. The shining example of this is Rachael's ex, Brad, who re-enters the picture determined to win back his girl. Guy believes so much in his own mojo that he refuses to believe that Rachael really is over him. Given, Rachael did give this impression that she was maybe waffling. Look at her caving in to Brad's asking her to dine with him, and then look at them at the bar having a good ol' time laughing it up. And guess who walks in just then? At that point, I was just as mad at Rachael as I was at Brad.

Going in, I thought how nice it'd be to see William Katt again. In my opinion, his superhero series from the early 1980s, The Greatest American Hero, is severely underrated. Katt is okay in this one. He does have a string of nice dad moments. But there are times when his character comes off too quirky, and not in a delightful way, but more in a way that generates a nonplussed reaction from the viewer. And I have to dock the movie points for the inconsistency of Katt's character's name. In one scene, Brad's mom, whom Katt had been crushing on, greets him as "Carter." But in a later scene he introduces himself as "Dennis." So, which is it?

I have one last positive. In 2020, Lifetime premiered three Christmas movies on three consecutive nights - A Christmas Break, Spotlight on Christmas, and The Christmas High Note - with all three movies ending with a play. The play staged in this one is the best of the three, although that's not saying much. Those other two plays stunk it up.