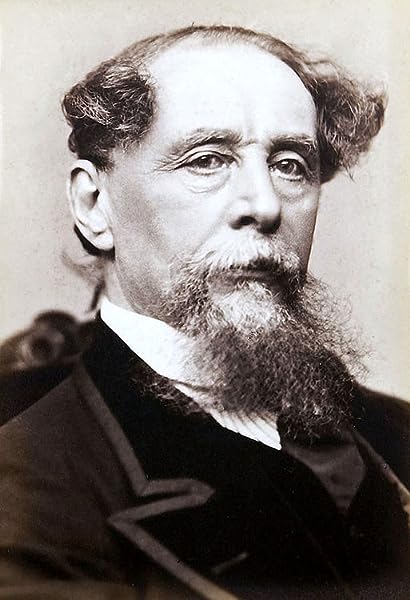 by Charles Dickens (Author)
4.7 out of 5 stars 802 ratings
See all formats and editions
Sorry, there was a problem loading this page. Try again.

A Christmas Carol captured the zeitgeist of the mid-Victorian revival of the Christmas holiday. Dickens had acknowledged the influence of the modern Western observance of Christmas and later inspired several aspects of Christmas, including family gatherings, seasonal food and drink, dancing, games and a festive generosity of spirit.
Read more
Previous page
Next page

New: Sarah Selects
Sarah Selects is a book club hosted by Amazon Editorial Director Sarah Gelman. Whenever Sarah finds a book that sticks with her, she loves to recommend it to her friends and family. These books are the books she's sharing, so members can talk about them after they’re done reading. Join the club to view and reply to posts from Sarah and get email updates when the February book is chosen. Join the club.

Charles Dickens was born in 1812 near Portsmouth where his father was a clerk in the navy pay office. The family moved to London in 1823, but their fortunes were severely impaired. Dickens was sent to work in a blacking-warehouse when his father was imprisoned for debt. Both experiences deeply affected the future novelist. In 1833 he began contributing stories to newspapers and magazines, and in 1836 started the serial publication of Pickwick Papers. Thereafter, Dickens published his major novels over the course of the next twenty years, from Nicholas Nickleby to Little Dorrit. He also edited the journals Household Words and All the Year Round. Dickens died in June 1870.

Amazon Customer
2.0 out of 5 stars Paperback version is bad
Reviewed in the United States on December 15, 2022
Not sure who is deciding to include these paperback and hardcover versions in one product listing, but it's clear from the reviews that people were not buying the paperback. The paperback is bad quality, pictures sometimes block out half the text, and the text switches from 2 to 1 columns per page inexplicably. There is no original manuscript or notes. Would not buy again.
Images in this review

William Smith
5.0 out of 5 stars A Christmas Carol
Reviewed in the United States 🇺🇸 on January 18, 2023
Verified Purchase
The five-star rating was given because the story tells of a man's change from one of self-centeredness to one of generosity after undergoing a profound reflection on his past, present, and future life.

The moral of this tale is as true today as it was when it was written in 1843.

Beverly Weseman
5.0 out of 5 stars The handwritten photos are hard to read, but are interesting.
Reviewed in the United States 🇺🇸 on February 1, 2023
Verified Purchase
This is for the people who not only LOVE A Christmas Carol, but also Charles Dickens. The handwritten side is VERY hard to read.
Read more
Helpful
Report abuse

Madelon Wilson
VINE VOICE
5.0 out of 5 stars God Bless Us, Every One
Reviewed in the United States 🇺🇸 on December 19, 2022
Verified Purchase
I am sure that many of you know this story from watching adaptations in movies and stage plays. I have had the privilege of seeing Sir Patrick Stewart's one-man stage adaptation on Broadway not once, but twice. Dickens' tale has become an iconic symbol of the Christmas season.

As I started reading, the words in my head had that distinct Patrick Steward British accent which made for a pleasant read indeed.

As much as I have enjoyed the various productions of "A Christmas Carol," there is something special about reading the words penned in 1843. The language may seem foreign to modern readers, but it is part of a literary heritage we should not forget.
Read more
One person found this helpful
Helpful
Report abuse

JimmyT
5.0 out of 5 stars Tears of Joy
Reviewed in the United States 🇺🇸 on January 3, 2023
Verified Purchase
What a classic. All these years watching the movie classics, B&W, Color and animated and the one that comes closest is Jim Carey's version. Almost word for word. If only everyone could read it and be moved as Ebenezer was in their hearts to help our fellow man. I make a promise to read it every year for the remainder of my life and try to live up to the Spirit of Christmas.
Read more
Helpful
Report abuse

Jane E. Hallett
5.0 out of 5 stars Still going strong
Reviewed in the United States 🇺🇸 on December 30, 2022
Verified Purchase
Over 150 years later, we are still reading, making PLays, and films from this book. You know what that means? Dicken's was a badass.
I hope I have many more a Christmas to reread this fantastic children's tale.
Read more
Helpful
Report abuse

Be ready to care about these characters
5.0 out of 5 stars The bestest and most delightful little yarn.
Reviewed in the United States 🇺🇸 on December 21, 2022
Verified Purchase
"Piping for the blood to dance to." Little can be said about this masterpiece that hasn't yet already been uttered verily. It is enough to say that it is wonderful...and can only be interpreted as wonderful, save for the countenance of the very student if it's narrative lesson. "God bless us, every one."
Read more
Helpful
Report abuse

GREGGORY J PARKER
5.0 out of 5 stars As always a great read
Reviewed in the United States 🇺🇸 on December 26, 2022
Verified Purchase
I love to watch old black and white movies about Scrooge. However, my favorite Christmas activity is to read A Christmas Carroll with my family. You can never can go wrong with a classic such as this.
Read more
Helpful
Report abuse
See all reviews

Nick Stringer
3.0 out of 5 stars Bit unbelievable
Reviewed in the United Kingdom 🇬🇧 on January 8, 2022
Verified Purchase
I thought that it all happening on one night was a bit unbelievable I mean why didn't scrooge get up put the kettle on,make himself a cup of tea or something. Cratchit was a bit weak he had a job and working on Christmas day was obviously part of the contract I mean the gig economy is here to stay !! Why didn't they take tiny tim to the GP or a&e it would have been more believable if tiny Tim had some like super power which could have defeated scrooge....very poor ending
Read more
6 people found this helpful
Report abuse

Ian
5.0 out of 5 stars great read
Reviewed in the United Kingdom 🇬🇧 on December 19, 2022
Verified Purchase
Read it just before Christmas. Great book very timely and has a good meaning even now.

I would recommend everyone read it.
Read more
4 people found this helpful
Report abuse

ᎷᏒ ᏬᏦ
3.0 out of 5 stars A beautiful addition of an all time!
Reviewed in the United Kingdom 🇬🇧 on February 5, 2023
Verified Purchase
I've always wanted to read a Christmas Carol but never got around to it.
It's a masterpiece. A message to be kept all year around.
Well worth adding to any collection.
Thanks 👍🏻
Read more
Report abuse

Edgar Graham
5.0 out of 5 stars Touching and Sensitive Story!
Reviewed in the United Kingdom 🇬🇧 on December 30, 2022
Verified Purchase
I enjoyed reading the transition of Scrooge from a mean old miser to a person who was concerned with alleviating the poverty of his fellow man. I couldn't find any faults with it and heartily recommend it to be read by anyone with a reading age of 11 onwards.
Read more
Report abuse

paul whiteoak
4.0 out of 5 stars A bit unusual.
Reviewed in the United Kingdom 🇬🇧 on December 24, 2022
Verified Purchase
A bit thin and a bit big .
Read more
One person found this helpful
Report abuse
See all reviews