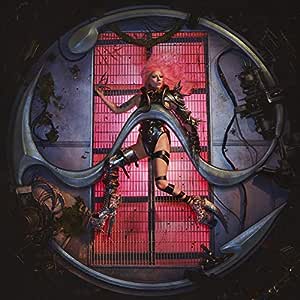 4.6 out of 5 stars
4.6 out of 5
848 customer ratings
How does Amazon calculate star ratings?
Amazon calculates a product’s star ratings based on a machine learned model instead of a raw data average. The model takes into account factors including the age of a rating, whether the ratings are from verified purchasers, and factors that establish reviewer trustworthiness.

The Listener
5.0 out of 5 stars Lady Gaga has embraced her iconic Dance Pop sound again and moves herself and the genre forward.
Reviewed in the United States on June 2, 2020
Verified Purchase
There are a few artists I consider close to my heart and Lady Gaga is one of them. Her first two efforts, The Fame and The Fame Monster, both came out when I was in my early 20's and it was a particular time I look back very fondly on. Born This Way was what I consider a fully realized evolution of Lady Gaga after exploding with The Fame. Admittedly it took me a few years to get into Artpop, but once I did, I really loved it. Cheek to Cheek I adored, it was a really awesome collab with Tony and Lady Gaga singing out worked very well.

Then came Joanne. Ironically I only started loving Artpop about 6 months before Joanne was released and Joanne was a massive shift in style, and it was a shift I still don't enjoy. While there were good songs on that album and the whole concept was a very meaningful, I felt it was a half embraced direction. You could tell Gaga was struggling, and she was self admittedly. You can check my review of it on my Profile page.

So this brings us to Chromatica, Lady Gaga's much anticipated follow up four years after Joanne and it is a return to form. I was excited when I heard the lead single Stupid Love and it brought Gaga back to her roots. If you were worried, there is nothing to fear, this is no throw back cash in. You can hear Gaga has grown since her last foray in this electronica sphere with Artpop. The production is fantastic, the music is great and Gaga sounds excellent. It is a very crisp album.

Chromatica may also be the most cohesive album to date from Lady Gaga. The songs all gel very well together and the musical theme just flows. There is no jarring style change throughout the album and that isn't to say the album is boring or predictable, quite the contrary. The album was crafted so well, it's over before you know it and that's with 16 tacks. Ariana Grande and BlackPink are a nice addition(salty Black Jack here, wished 2NE1 could have done this as their style fits Gaga's so well, sadly they were disbanded) to Rain On Me and Sour Candy. However, Elton John's presence on Sine From Above really brings that song to the next level. Elton and Gaga sound great together and his singing is powerful.

The album features some deeply personal lyrics for Gaga and it's pretty apparent. Chromatica marries The Fame's synth and dance beats, mixed with a touch of the more complex compositions of Born This Way, without sounding overly busy like some of Artpop and Joanne. The beauty really is the more simplistic approach to the music; the 80's synths, 90's techno, thumping bass, with soaring vocals and fun electronica. The Chromatica I, II and III all have great orchestral sound to them and each introduces the phases of the album.

Chromatica, to me, really shows Gaga embrace the sound that put her on the world stage, the sound she seemed to be running from for more than half a decade. Gaga shows that she can continue to evolve that sound without it getting tired or dated. In doing so, Gaga has single-handedly moved her genre forward and raised herself up a level at the same time.

Roane
5.0 out of 5 stars Surprisingly deep
Reviewed in the United States on May 31, 2020
Verified Purchase
I've listened to the album a few times since I first got it, so this review has more or less been rewritten:

This is the 4th or 5th time I've edited this review. Chromatica is the first Gaga album since Born This Way that left an immediate impression. It's comparable to Born This Way in that Chromatica has a solid point to it. It's her in pain, depressed, trying to find a way to heal herself through house-influenced dance music. It's sound is rooted in both the 80s and the 90s while remaining contemporary. And it knows what it is. Where Born This Way was an anthem for the world at large to inspire, Chromatica turns inward with a focus to self recovery. It's the healing wound of Artpop, a return to the dance scene after 7 years absent.

I like this album quite a bit. I think the Giger-influenced visuals are arresting, I think a good chunk of the songs are strong and retain elasticity in that on repeated listenings, they don't break. A step up from Joanne, a work that had moments of punch amid the less interesting genres shifts. Joanne isn't bad by any means, but next to Chromatica, I feel it loses a lot of shine.

There are a few missteps here and there, but those songs are nice enough to where one might not skip over them. Fun Tonight feels a little anticlimatic, Replay is a bit on the strange side and in the same vein as Fashion! from Artpop, and Babylon has a chorus that is obviously a riff on Vogue. An unapologetic one, as well. She's trolling media, Madonna fans, or us. Maybe all, who knows. It's about as subtle as a nut punch and hilarious to boot. The one thing I DO like about Babylon is the pun behind the title. "That's gossipe, babble-on."

I do consider it a misstep because like Fun Tonight, while effective in it's own regard, didn't fall in line with the rest of the material.

My favorite tracks are Alice, Free Woman, 911 - though the chorus is a bit underwhelming, Plastic Doll, Sour Candy, Sine From Above, and 1000 Doves. Alice is immediate and huge. It goes great as a companion with Stupid Love, much like how Free Woman fits nicely next to Rain On Me. 911 is classic Gaga, weird and somewhat sinister, with synths that sound like a callback to Born This Way. Also works well with the Giger-inspired fleshly visuals. We all know what the cd case back looks like, it's hard to miss it. Plastic Doll's chorus is like a mini-explosion. It's beautiful and compliments the beautiful vocal delivery. There's so much emotion in her voice in this song alone.

Sour Candy is sugary and shimmery while both Sine From Above and 1000 Doves are somber and contemplative. There's nothing bad on this album and gets better and better the more you listen to it. I don't see myself stopping any time soon and am rotating it along with other Gaga albums. The lyrics are surprisingly deep considering the glistening, bright music framing them.

I don't know, this one might not resonate immediately like past Gaga albums. When Born This Way came out, people complained that it wasn't their Gaga. When Artpop came out, they did the same thing, as well as Joanne. I'd like to say this will grow on those who are on the fence initially, because it's her best album in years. Also doing REALLY well, too, on the charts. Rain on Me is her first number 1 debut since Born This Way, a very smart follow up single to Stupid Love that didn't seem to make much of an impact. A shame, because that song is just as good.

Edit: Seems like a lot of people are saying this album is either dated or underwhelming. Gaga intentionally went with a 80s/90s house influence, so I guess a lot of people can't appreciate it based on current musical taste trends. Suddenly Joanne is better when Joanne was hated when it came out. Personally, I think this album has much more immediate hooks than either Artpop or Joanne. They vocals are soaring, the songs glisten and sparkle. I stand by what I say. Maybe in time others will find they like it better.
Read more
26 people found this helpful
Helpful
Comment Report abuse

Jonathan Dale
4.0 out of 5 stars Death Metal perspective
Reviewed in the United States on May 30, 2020
Verified Purchase
I am normally a metal head. I fell in love with Lady Gaga with the Fame. So now I say this album is very good. I really enjoyed it.

The vinyl is hard to determine a good rating because one it doesn't come in a jacket with the art. It also had a slight warp probably because of the no jacket situation.

However the LP sounds very good. No noise and very good sound.

I think it is a successful outing that had a few downfalls with the LP roll out.
Read more
26 people found this helpful
Helpful
Comment Report abuse

Cait
4.0 out of 5 stars Disappointed
Reviewed in the United States on May 29, 2020
Verified Purchase
It’s cool that it is a clear vinyl but the packaging is super cheap plastic and you can barely read the back. I was hoping for more of a cardboard packaging and the pink portion to be beveled.
Read more
27 people found this helpful
Helpful
Comment Report abuse

David E.
3.0 out of 5 stars There is no artwork. Its just in a clear plastic sleeve.
Reviewed in the United States on May 29, 2020
Verified Purchase
I wasnt expecting this record to be in a clear plastic sleeve. I enjoy the artwork on albums and this album has none. This is very disappointing. If you want artwork do not but this LP on vinyl.
Read more
26 people found this helpful
Helpful
Comment Report abuse
See all reviews from the United States