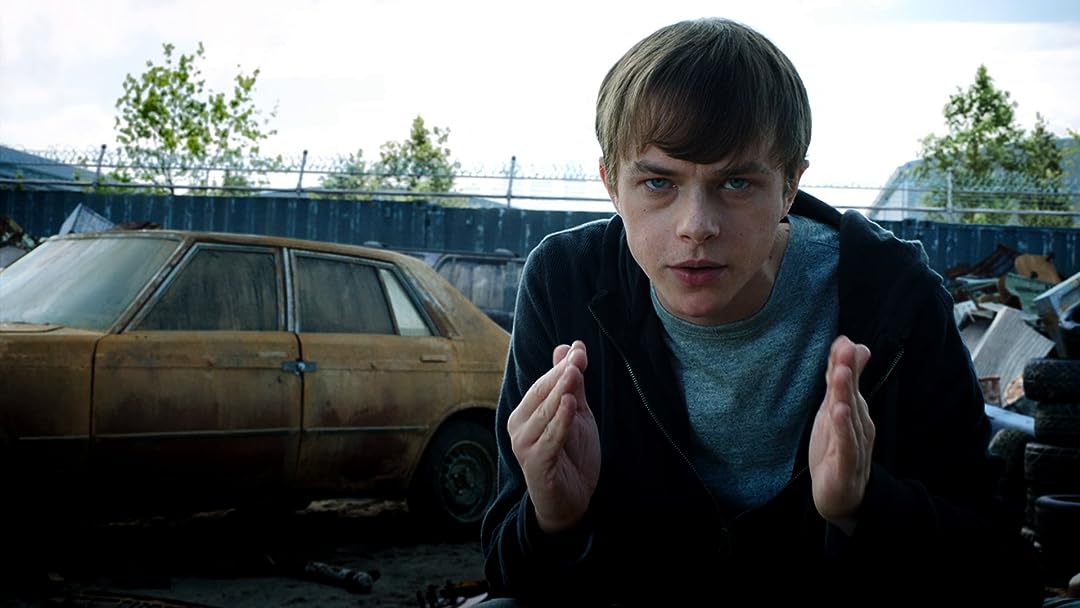 (3,887)
7.01 h 29 min2012X-RayPG-13
HD. Three high-school teens record themselves in the wake of gaining super-human telekinetic powers from a mysterious rock.

The Wanderer of AkronReviewed in the United States on September 21, 2019
4.0 out of 5 stars
This film has many great ideas
Verified purchase
"Chronicle" is a found footage film about high schoolers who gain superhuman abilities. That's already a great idea and it's mostly executed well. Dane DeHaan gives one of his best acting performances here and Michael B Jordan was also a source of fun throughout the movie. It's mostly handled very believably and realistically (aside from some of the found footage camera angles and the fact that there are so many people walking around with camcorders) and it shows just how fun and dangerous it can be for a person going through high school to have X-Men level powers. Make no mistake, the film has just as much seriousness to it as it does fun and it pulls some emotions. This is not for your children but pretty much anyone else.
6 people found this helpful

joel wingReviewed in the United States on August 15, 2020
2.0 out of 5 stars
3 teens get superpowers and one is anti-social Guess what happens?
Verified purchase
Three high school students, Andrew (Dane DeHaan), Matt (Alex Russell), and Steve (Michael B. Jordan), run into a meteor that gives them superpowers. It’s mostly filmed in the handheld camera style that was such a trend in the past.

The movie starts off with some light-hearted fun as the three figure out their powers. Then it becomes completely predictable. One of the three teens is a social outcast with a messed up family so you can guess what happens at the end. Not very satisfying as a result.
C

P.ChhabraReviewed in the United States on December 12, 2019
5.0 out of 5 stars
Movie Could Have Opened it up for many more.
Verified purchase
Very unique story and their powers were suppressed by the characters because they were just kids who had life problems get int eh way. They could have made this into a military spectacle but tried to keep it simple and show the immense power. The stuff they found in the rocks appeared to revolve and adjust to their specific personality types. It was an excellent film that I'll watch again and try to gain some more insight on where it was trying to go. Well worth the investment and entertainment,,,,,Enjoy!
2 people found this helpful

ReAgent 6Reviewed in the United States on November 29, 2013
4.0 out of 5 stars
What if you suddenly became a god?
Verified purchase
Three friends discover an energy force that endows them with super-human abilities and changes their friendship. One is seduced by that power and embraces the idea that he is the apex predator. He is at the top of the food chain and feels no guilt for his actions, no matter how they may impact others further down the chain.
Chronicle movie poster

What if you suddenly became a god?

Director Josh Trank uses the hand-held camera technique to document the lives of three high school seniors as they become young gods after discovering an (alien?) force. There’s not much more to the movie than that plot summary so really, if you’ve ever wondered what if you gained super powers…and what would you do? The trick is to show us something that is so ordinary that it’s special and thanks to good writing by Max Landis and Trank, we get that. I’m not suggesting this is a greatly written movie, I’m suggesting that it has been written to steer us in a certain way that retains realism and believability.

Blair Witch showed us how effective documentary styled filming can be and Cloverfield showed us how it can be used to bring on the cheese. You always have that nagging voice in the back of your mind- asking about tape and battery time and you wonder if someone would really, really be filming this much. In this case it works well and the camera slides into normalcy and you forget its first-person and just watch the onscreen action. The special effects are well done and seem even more realistic when combined with the lo-fi camera grain.

Back to the writing. It’s important to note that what’s been written out is just as important as what’s been written in. There’s the cliché of the trio. We have a loner (Dane DeHaan), Mr Popularity (Michael B Jordan) and a too-cool-for-my-own-life pseudo-intellectual (Alex Russel). The reason they work well together is because each posses the qualities another lacks and it keeps them focused on group concerns: exploring their new powers and getting stronger.

In younger days, I and my friends would play ‘Adventure’ which was basically Dungeons & Dragons without the paper and dice. We would build scenarios and talk our way through our actions and create a story in real time. You do or say this and this is what happens after. You react and do that and here’s what happens next. In the earliest games, we spent our time exacting revenge on those that wronged us and getting the girl we wanted. Eventually thoughts about our real non-life seemed unimportant and we began to think about being super-heroes and fighting other beings with powers and becoming worldly beacons of justice. Really, we did.

Chronicle could follow that same ambition process, but we are narrowly focused on this trio and the early days of their enhancement. High School life is still most important, and should be because that is all the characters know. We don’t get answers for where the energy source came from and do not explore any of the hinted at tangents -like the world and government reaction to some of the incredible events the trio is at the center of. There’s a built in break for using the hand-held documentary style because you can say: if it wasn’t filmed by this guy then we can’t show it to you. That’s broken up in some nice shots where surveillance camera footage is spliced in at key moments.

Of course in any movie, you can criticize the actions of the main characters and figure you could have done better in their position. One character needs cash and so he robs the local (presumed) drug dealing a-holes. That’s not enough so he robs a gas station. At first I thought with those powers why isn’t he making tons of cash or if you’re going to rob something, rob an ATM or bank…but these are simple characters acting on impulse. This is a simple movie trying to explore what some would do if they suddenly became infused with super-human powers. Sometimes we come back with complex answers when in truth; it might all be as simple as this movie. I thoroughly enjoyed this movie and the ending had a much bigger climax than I expected. I am not a movie critic, I am critiquing a movie.

MedlawReviewed in the United States on March 25, 2021
5.0 out of 5 stars
Fun watch.
Verified purchase
I found this movie when reading reviews of another movie-“Mortal”. (Mortal is great check it out! I appreciate when reviewers suggest good flicks! Ty!)
I thought this would be the typical teenage superhero flick but it’s not exactly-in fact I wouldn’t suggest this for young teens as it’s more of a cautionary tale. The 3 main actors did a great job starting out as just teens goofing round. Then the movie takes a dark turn and turns a tad horrifying. Fun watch!

Amazon CustomerReviewed in the United States on May 28, 2020
4.0 out of 5 stars
Nice twist on an orgin story
Verified purchase
Took a long time to get to a point in this movie, but overall, it was good. Three teens find a meteor one night, then they begin to demonstrate powers. There is many, many minutes of them playing around with their new abilities, but the story doesn't really go anywhere after that until almost the end when the story takes a dark turn. Could have been better, but, like I said, overall a good movie.

Kindle CustomerReviewed in the United States on December 31, 2012
4.0 out of 5 stars
One of the best "mockumentary" style films in years (4-1/2 stars)
Verified purchase
Three young men - cousins Andrew (who has recently taken to taking a video camera with him everywhere, chronicling everything) and Matt, and Matt's friend Steve - discover, in the woods near a party they are attending, a hole in the ground that leads them to what looks like an alien ship buried underground. The boys get a little too close, eventually being knocked unconscious - and when they awaken the ship-thing is gone ... and the guys discover they now have telekinetic powers. Powers that grow only stronger as they use them. As Matt and Steve have fun with their new-found powers, testing them, Andrew (whose home life is rotten, to say the least) finds the powers appealing more to his darker side ... and soon the "fun" gets out of hand, and turns decidedly sinister as Andrew in particular pulls away from his buddies, able now to fight back against all the injustices that have piled against him over the years. The ending "battle" is killer here (I saw the director's cut, six minutes longer and way-cool), and you grow to know and care about the three main characters and what will happen to them. Loved it!
7 people found this helpful

Eiric E. PádraigReviewed in the United States on August 3, 2012
5.0 out of 5 stars
...and Then There Was Flight
Verified purchase
Stop me if you've heard this one: three kids mysteriously gain super powers....

So these kids... they aren't friends per say, but they grow close due to their powers. In a series of learning to use their powers, the situations escalate until... well. Let's just say the words 'Boss Fight' sum it up well.

The digital fx are, at some times, pretty obvious (even the composite shots look questionable), but it is easy to over-look. The acting is actually pretty good. I mean, no one's getting an Oscar for this film, but the characters are fun to watch: learning to use their powers brings them much closer and they try to support each other...

The director's cut adds some good character moments managing to not drag the film down too heavily and for the most part were seemingly cut just for the sake of time. That ends the specials of this BD - there's like ONE deleted scene, some pre-viz, a bit on camera testing (kinda of raw footage with a few kids who were not actually in the film)a trailer, sneak peaks and soundtrack info.

If you like origin stories of the heroic bent towards superpowers, you can't go wrong. As common as it is in the film industry today, it's the characters and the situations they find themselves in - that is why we watch the flick.
2 people found this helpful
See all reviews
Back to top
Get to Know Us
Make Money with Us
Amazon Payment Products
Let Us Help You
EnglishChoose a language for shopping. United StatesChoose a country/region for shopping.
© 1996-2021, Amazon.com, Inc. or its affiliates