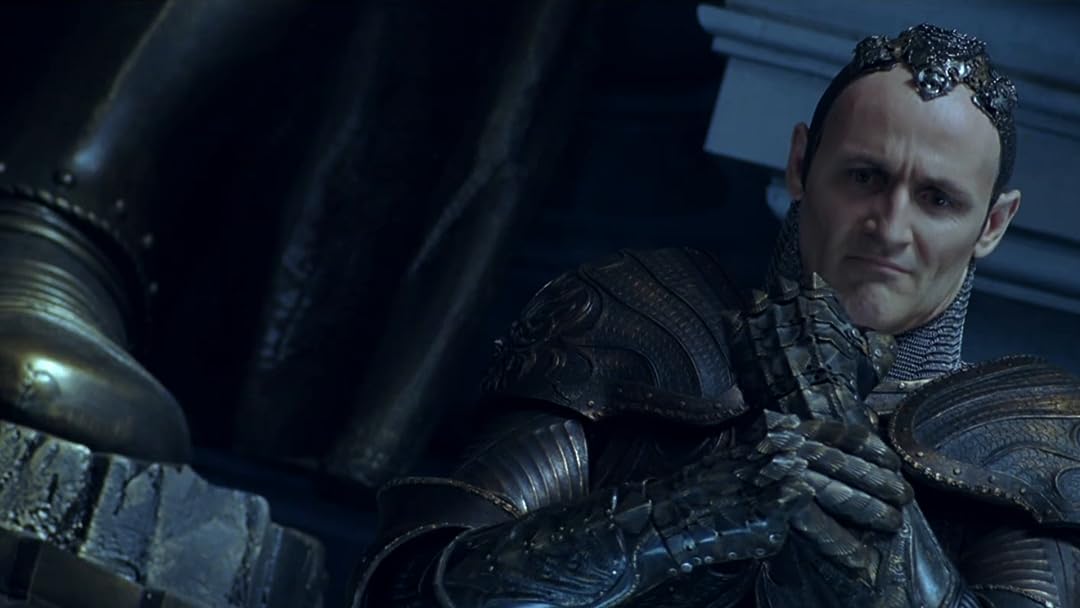 joel wingReviewed in the United States on June 22, 2020
3.0 out of 5 stars
Put big bucks behind Riddick character & put him up against an empire
Verified purchase
The Chronicles of Riddick was the big budget follow up to Pitch Black with Vin Diesel in the lead. In the first installment Riddick was an alien attempting to help a group of people trapped on a planet with a series of beasts on it. This was a far grander movie with Riddick facing off against an entire galactic empire called the Necromongers who seek to conquer the universe. The story raised the question of whether a loner outlaw was up to the task of facing off against a great power like the Necromongers by himself.

The money they spent on the film is apparent right at the start as a planet is invaded by the Necromongers with a huge force of ships and men.

It turns out Riddick is the one race of beings that can resist the Necromongers and hence you have the conflict in the story. The problem is in the middle of this giant confrontation they threw in a second story about Riddick being hunted by bounty hunters that didn’t seem necessary at all.

Overall you have plenty of special effects and action. It’s pretty amazing what they did with the original Riddick story taking it in a completely different direction.
C

Is Riddick RIDICulously overpowered? You betcha. Is it anything like the serious tone of Pitch Black? Nope. Does it contain any kind of compelling character development for Riddick like it did in pitch black? Nope not really. We always knew he was conflicted by his human side and his animal side, that beating within the cold black alpha Furian heart of Riddick is a soft compassionate idealist who is drawn into situations that usually lead to him favoring the animal side...

So despite any and all flaws, the combination of world Building and tight visuals, epic special effects, and over the top, popcorn-munching action by Vin Deisel keeps this going. It's one of my favorite movies.
3 people found this helpful

JJCEOReviewed in the United States on January 24, 2018
5.0 out of 5 stars
A good Sci-Fi film and a continuation of the Riddick saga!
Verified purchase
I am a fan of Sci-Fi and I found this movie to be very good. I purchased the BluRay version for my video library. The quality of the video and sound was excellent. I also purchased a VUDU HDX streaming video version to play on our family’s Apple and Android products. I also streamed it to our digital projector onto a 12 foot diagonal screen and the quality was impressive.

I owned the DVD version of the film and I wanted the director’s cut on BluRay. There are some slight variations in the movies but the presentation was still entertaining and fun to watch.

Vin Diesel does a good job in this film playing the role of the super bad convict from the planet Furyan. The film features him as the villain and the hero and as the only chance to save the human race.

There is a lot of action in this film, as you would suspect, and that made it entertaining for me. I enjoyed the Sci-Fi part of the film and the look into the spacecraft and weapons used by the warriors and other fighters. For me it was a good film and I enjoyed it. I would say though that I liked the movie Pitch Black better.

I am glad I added it into my video collection.
6 people found this helpful

Momo11Reviewed in the United States on March 9, 2014
5.0 out of 5 stars
"You're not afraid of the dark, are you?"
Verified purchase
This is such great classic sci fi, it's hard to believe it is from 2004. Vin Diesel was born for this role. This is one of my favorite all time movies, the opening scene gets your heart pounding and it just doesn't stop: almost non-stop action from there on out. Costume, set design, all top notch and the acting is excellent too! If you think about the plot, it gets a little sad, be like his character, stick to action.

Also, somehow, the movie is composed almost entirely of excellent one-liners. Must be Vin Diesel's excellent, yet under-appreciated, acting. "It's a tea cup, actually." He makes the statement "29.4 kilometers" sinister and hilarious at the same time. Truly amazing. The action really does distract away from his acting, so Mr. Diesel, there are those of us that do appreciate both your ability in your stunts, who enjoy your material, who do also appreciate that it does distract, but without the excellent acting, the stunts are just stunts.

The entire movie, however, is moving poetry. Thandie Newton nearly steals the show from him. The Purifier is mysterious and sad and one of the best death scenes ever. I have been a fan of Karl Urban since his Xena (Eros/Caesar) days (hope he plays Erak in the rumored production of The Ranger's Apprentice), his character is so powerful and so pious, yet so mixed up and impotent. The set design is truly other wordly and the first time I saw the Lord Marshall and he removed his face covering I nearly fainted! So creepy! This is one of the best done movies ever. Congrats to David Twohy and thanks for making this movie. Anyone who likes sci fi should watch this!
8 people found this helpful

avgvstvsReviewed in the United States on October 13, 2013
4.0 out of 5 stars
A D&D "Evil" Campaign in Space
Verified purchase
This review is targeted towards the people who know what "lawful evil" and "neutral evil" mean in the D&D sense. (As Diesel was a former player, I think its relevant as he produced this movie...)

Evil campaigns (where the protagonists are bad guys pursuing their own "evil" agendas) are really designed to try to explore characters and moral conflicts from a completely different perspective. We're all socialized to cheer for the good guys, but campaigns on this kind of theme put the characters in the position where all options are "evil."

Riddick comes off as a textbook "neutral evil," and in this story--in fact what I believe to the point of the entire film--is to contrast that alignment type with the lawful evil that make up the Necromongers. And the evil of the prison guards. And the Mercenaries. (All various neutral types.)

Most people who don't consider this will probably write off Riddick as simply a "tough guy" who's really a "good guy." (Considering the fact that he willingly goes to prison in order to break out "Jack.") There's definitely a hint of some kind of code of honor in there, but putting both this one and "Pitch Black" into plain view, its clear he doesn't attach an automatic value to any human life but his own.

That's really about all I can say... I can't read 400+ reviews, and if you managed to read this far, feel free to say this review helped you if it made you consider the film from a different angle.
3 people found this helpful

TimotheusReviewed in the United States on October 30, 2019
4.0 out of 5 stars
Fun movie but all Vin Diesel
Verified purchase
So the obvious anachronistic earth slang and the "all about Vin" angle of the movie does not detract from being an enjoyable Saturday night popcorn flick. Not for the really little ones. I suggest 12 and older.

Could have been a three due to the campy Vin Diesel narrations at times but I can't give a 3.5 starts so I am giving it 4 stars. If you line Vin Diesel, you will lean towards a 4 start too.
One person found this helpful

Richard RahlReviewed in the United States on June 21, 2014
5.0 out of 5 stars
Hope your not afraid of the dark
Verified purchase
It is 5 years following the adventure in Pitch Black and Riddick finds himself up against the Lord Marshall and his army of Necromongers who seek to convert or kill mankind.

Riddick is approached by Aereon (Judi Dench), leader of Helion's "elementals," who pleads with him to aid them in their fight against the Necromongers

Hoping to learn of his past as a member of the Furion race, Riddick agrees. Along the way he is briefly reunited with Jack Badd (Alexa Davalos), the runaway he saved in Pitch Black who now goes by the name Kyra.

Hungry for power, Dame Vaako (Thandie Newton) plots to use Riddick to help eliminate the Lord Marshal and thereby elevate her consort Commander Vaako (Karl Urban) as the new leader of the Necromongers.

I have loved the Riddick movies since Pitch Black.

Vin Diesel does a terrific job in his portrayal of the character and is supported by an excellent cast including Judi Dench, Karl Urban and Colm Feore.

The special effects are outstanding as is the stunts and choreography of the fight scenes.

The only issue I had was with the DVD itself. When playing in my Panasonic DVD player, it will only play with the audio commentary on (rather annoying). This occurred in both Convert and Fight option. I found no way to turn this off. The only way I could watch the movie without commentary was playing it on my XBox 360.
4 people found this helpful

my morning reviewReviewed in the United States on January 29, 2018
5.0 out of 5 stars
excellent art direction CGI and detailed scientific attention. the furious sun coming up.
Verified purchase
who knew? now i know why everyone likes Vin Diesel. I love science fiction, the wilder the better. The second film is better than the first, I think, but i saw it first so... this one is good too. fun, imaginative, violence but not like .. disturbing that I recall. big adventure and this guy is a bad ass hero from another planet where they apparently talk alot like we do!
One person found this helpful
See all reviews
Back to top
Get to Know Us
Make Money with Us
Amazon Payment Products
Let Us Help You
EnglishChoose a language for shopping. United StatesChoose a country/region for shopping.
© 1996-2022, Amazon.com, Inc. or its affiliates