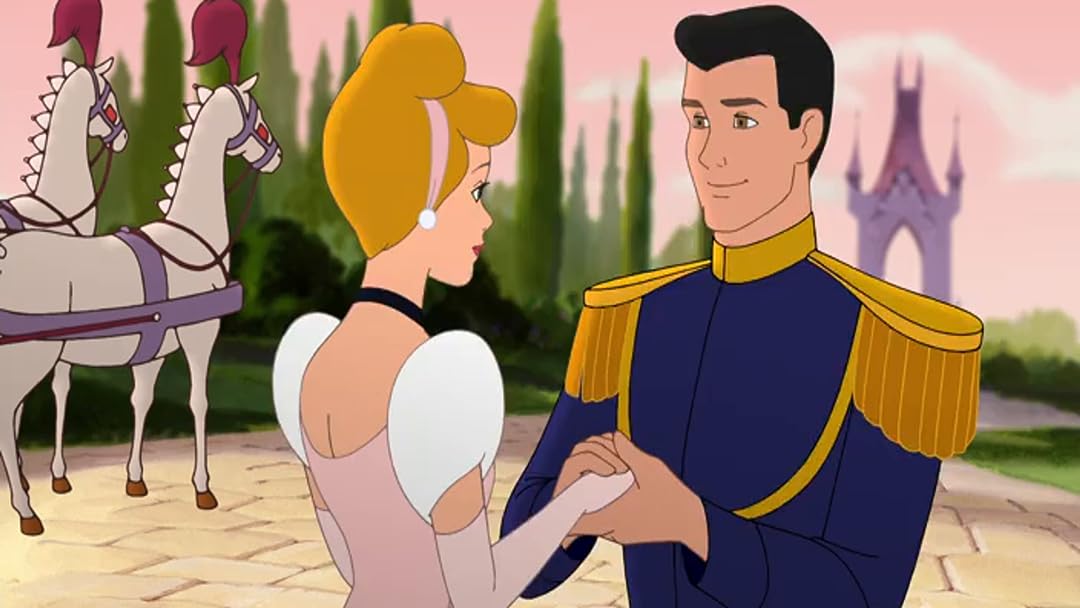 (845)
4.91 h 13 min2002X-RayG
The magic continues long past midnight in Cinderella II: Dreams Come True. In three heartwarming tales, the newly crowned princess finds that life at the Palace and her royal responsibilities are more challenging than she ever imagined. But with loving help from her animal friends and her Fairy Godmother, Cinderella shines in her new regal role!

Amazon CustomerReviewed in the United States on March 24, 2008
4.0 out of 5 stars
Great movie for our 3 year old
Verified purchase
Our three year old daughter loved this movie. As other reviewers have said, it's really three movies mixed into one storybook that the mice decide to make for Cinderella. This works out really well for our daughter, who hates antagonists of any kind. She wouldn't watch the third portion of this movie because it featured the step mother, but the first two movies she really liked.

Other reviewers are correct that the movie really doesn't feature Cinderella much at all, and it's worth keeping in mind. But for our daughter she's just as happy to see Cinderella just a little bit and watch the mice or Anastasia.

Jamie JohnsonReviewed in the United States on April 15, 2021
4.0 out of 5 stars
One of Disney's best sequels
Verified purchase
I grew up watching many Disney movies. I'm glad that I finally find some Disney movies, like Cinderella II, on DVD. It will go good with my Disney movies collection.

Stephen VerhaerenReviewed in the United States on May 17, 2003
5.0 out of 5 stars
What is wrong with you people?
Verified purchase
I have seen a lot of bad reviews for lots of Disney sequels like this movie, and what I don't get if a lot of reviewers here hates Disney sequels that bad, then why did they bother to see and write a review for this movie? And maybe even own the movie too. Don't yuo ever seen a Disney animated movie, and then wonder what happens to the characters after the movie ends? Maybe that's may be why Disney makes sequels to thier movies, or do they make them to make more money? If you thought this is bad, then maybe you haven't seen The Country Bears. As the movie opens, the fairy godmother is reading the mice the only Cindrella book there is. Then the mice decided to make thier own Cindrella book, but this takes place as when Cindrella (Jennifer Hale) as a princess, and they tell a couple of stories like Cindrella's first day as princess, and she discover the castle's strict rules like no commoners allowed in the castle and the drapes are to be closed at all times. But when she and her prince (Christopher Daniel) return to the castle, the king (Andre Stojka) decides to take a trip with his son and puts Cindrella in charge of special events like the royal banquet. The movie reunites your favorite characters from the orginal movie and has new characters in this movie as well. If you liked the first Cindrella, you might like this, but please don't bother to view if you hate Disney's sequels.
2 people found this helpful

JessicaReviewed in the United States on May 24, 2019
5.0 out of 5 stars
Buena secuela
Verified purchase
Muy bonita pelicula. Me trajo muchos lindos recuerdos.

Henry WestReviewed in the United States on August 5, 2011
5.0 out of 5 stars
Cinderella Begins Her Life As Princess!
Verified purchase
One of the most popular Disney Princesses continues her adventures in Cinderella II: Dreams Come True, the second chapter of the Cinderella trilogy. In part II, Cinderella and her mice friends and the Fairy Godmother tells three stories of happiness and overcoming obstacles to find true love. The special features includes a DVD storybook read-along, a music video by Brooke Allison and two new interactive games, as well as sneak peeks of other Disney favorites like Tinker Bell, Underdog, The Aristocats and WALL-E. Cinderella II is just perfect for any Disney DVD collection and a wonderful way to learn what happened after "Happily Ever After"!

Mallory SenichReviewed in the United States on January 18, 2018
5.0 out of 5 stars
Cinderella 2 DVD
Verified purchase
I love this movie! I used to watch it on video when I was little. There was nothing wrong to show what happens when Cinderella and her friends share their stories after "happily ever after."
One person found this helpful

Anna-Lisa de PrahlReviewed in the United States on April 8, 2002
1.0 out of 5 stars
Worst sequel ever!!!!
Verified purchase
I bought this video because I loved the first Cinderella, I was very watchfull of the release date because I didn't want to miss it. I wish I had... All the other sequels to Disney classics have been very good, but this one isn't even a sequel; it's three different short stories that don't have anything to do with the original. I was bored after the first 30 minutes of the film (that has never happened to me before with a Disney movie). The animation is awful and the stories are boring, the only story in which Cinderella is the main character is the first one and she plays a secondary character in the other two (this is supposed to be a Cinderella video). I regret not renting the video before buying it, it's money wasted that I could have used buying another one.
I can't believe it's a Disney video. WHAT WERE THEY THINKING???????
I hope the people in charge of sequels pay more attention to the quality of the film (animation,story,etc.) so we don't get another one like this.

9 people found this helpful
See all reviews
Back to top
Get to Know Us
Make Money with Us
Amazon Payment Products
Let Us Help You
EnglishChoose a language for shopping. United StatesChoose a country/region for shopping.
© 1996-2022, Amazon.com, Inc. or its affiliates