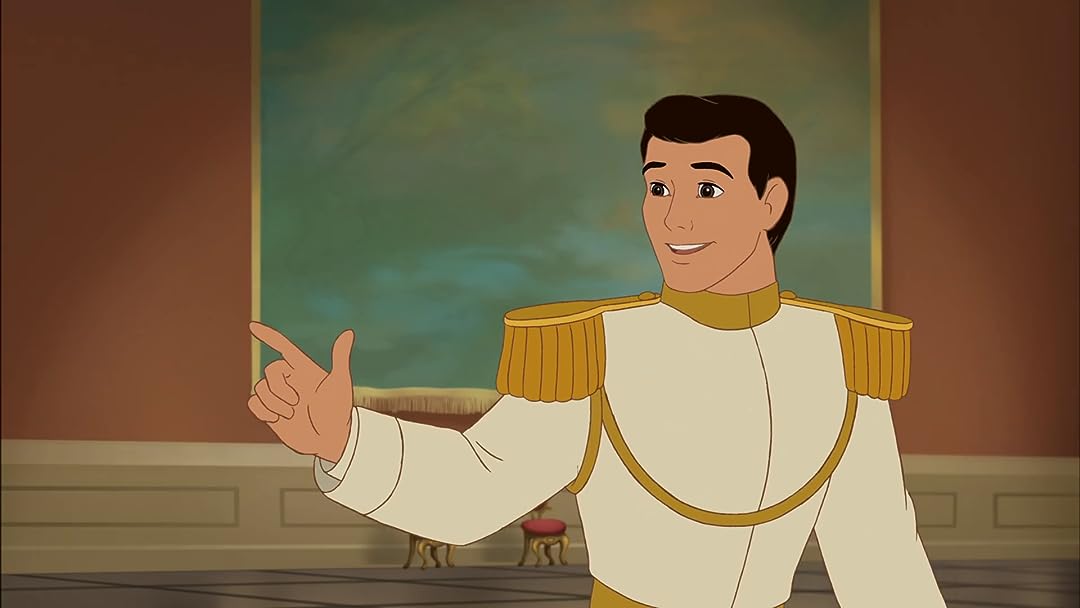 Cinderella III: A Twist in Time

(678)
6.01 h 13 min2007X-RayG
Cinderella III: A Twist In Time poses a tantalizing question: What if the slipper didn't fit? In this thrilling, majestic, song-filled sequel to Disney's animated classic, Cinderella and Prince Charming are blissfully happy--until her stepmother steals Fairy Godmother's wand and casts a wicked spell that shatters Cinderella's happily ever after!

That Math ChickReviewed in the United States on July 4, 2018
2.0 out of 5 stars
Meh at best
Verified purchase
It was okay, but i didn’t like that the continuity from Cinderella II didn’t carry over. What happened to the baker?

The only part I did enjoy was how Anastastia seems to be growing as a person. The king was so kind to her and it warmed my heart. At one point she mentions not being used to anyone wanting her around and I was like “awww”.

All in all this could’ve been a half hour special. There was no need to make it a feature length film.

Being a kid the 90/s, it really bugged me to hear Babs Bunny’s voice coming out Anastasia,’s mouth. It distracted me from the movie.

Turtle502Reviewed in the United States on March 5, 2007
4.0 out of 5 stars
Great for young and old, a strange new Disney twist
Verified purchase
I really enjoyed watching this with my daughter (I'm a dad). I'm a science-fiction and time-travel fan, so when I saw an ad for this, I said "we have to get it". Disney did an excellent job with the story, but for children younger than say, 7 or 8, parents may need to explain things along the way. But it's a good introduction to "time travel" for little minds.

That said, I was amazed when the original "slipper" sequences were re-animated for this to include the changes! After having seen Cinderella nearly 100 times (not kidding!), it was odd seeing the sequence play out differently. I almost suspect that Disney did this story as an inside joke for all of us parents who have had to watch the original Cinderella countless times.

The animation is great -- the plot is enjoyable. They even add some depth to the characters of the Prince and King. Even Anastasia and Drizella become somewhat more real and likeable...if that's possible.

I'm not sure it has a lot of replay value -- surely not as much as the original Cinderalla. My daughter doesn't ask to watch it, but if prompted with this as a choice, she sometimes selects it. Overall, it's enjoyable -- watch it together!
5 people found this helpful

Lizz A. BelleReviewed in the United States on February 8, 2007
4.0 out of 5 stars
Nice Surprise...
Verified purchase
I love fairy tales in all forms, and I really did like Cinderella II. I was a bit worried about Cinderella III because my first impression is that Disney was just out to make more money. As I learned the premise for the movie, "What if the fairy godmother had become incapacitated and the stepmother had the wand?" and it made me stop and say, "Okay, I have to see that movie." Disney developed the plot quite nicely. Everytime Cinderella triumphed, the stepmother would one up her and I'd still be waiting for my happy ending. I liked the anticipation. Also, as many other readers have said, Cinderella has guts in this movie. She stands up to the stepmother and tells her "Hey lady quit raining on my parade!" This movie was a great sequel. It seemed to stem from a provacative idea rather than Disney being out to disappoint us with a sub-par sequel (i.e. The Jungle Book 2). Watch Cinderella III, it's a great movie for a rainy afternoon with your kids.
2 people found this helpful

trolldoll-1Reviewed in the United States on March 13, 2007
4.0 out of 5 stars
A good lesson for little girls..............
Verified purchase
I found this movie to be an interesting counterpart to the original - which I loved as a child and still as an adult. I found the story line interesting - Cinderella didn't rely on or even think about contacting the Fairy God Mother to get her out of the situation. With the help of her friends (granted they were mice & birds) she figured out how to resolve 'the problem' presented to her via her step-mother. The movie plants a good seed that we females should not rely on 'others' (i.e. the knight in shinning armor or the prince) to save us --- we need to be able to save ourselves for ourselves - that we have the inner strength to do so at our disposal. Doing so, we become a stronger person and more of a partner to the male we choose to love when we become adults.
7 people found this helpful

Henry WestReviewed in the United States on May 11, 2011
5.0 out of 5 stars
A Surprisingly New Disney Adventure!
Verified purchase
Cinderella III is the latest Disney direct-to-DVD feature film and the final chapter of one of Disney's most celebrated fairytales. In part III, Lady Tremaine, Cinderella's evil stepmother, finally gets her revenge by stealing the Fairy Godmother's magic wand and magically turn back time to prevent Cinderella from wearing the glass slipper, so Cinderella and her mouse friends Gus and Jaq battles back from a perilous fate to return back to her Prince Charming. The special features includes a Fairy Godmother magic wand game, a Princess music video juke box, and a special sneak peek of the Disney Princess Enchanted Tales DVD series. Cinderella III is one of the best Disney Princess DVD's to be enjoyed be everyone.
One person found this helpful

Christina SiskReviewed in the United States on January 4, 2022
5.0 out of 5 stars
Great movie
Verified purchase
Great movie! Eveylin just loved it! What an ordinary story line and a total twist to the story of cinderella. Any cinderella fan would love it! Highly recommend it!

H. ReedReviewed in the United States on February 13, 2007
3.0 out of 5 stars
Better than the second, not as good as the original
Verified purchase
When I first heard that Disney was making a third Cinderella, I was a bit leary. I'd already purchased and watched the second one and was very disappointed. HOwever, once I heard the premise of the third Cinderella, I was intrigued and interested. So, once it came out, I purchased it.

I will say, it is better than the second Cinderella only in that it tells an actual story and isn't a collection of short episods. Of course, it isn't as good as the orginial. I liked the story idea and the animation is actually quite good for a Disney straight to video but sadly, as the sequels tend to do, the characters where kind of ruined. For some reason, the sequels feel the need to take serious characters and turn them into goofballs! I highly doubt Prince Charming would leap out the palace window just because his father told him he could not go down the stairs! And I really don't think Cinderella would blatently disobey the rules. She would not confront the Prince alone and practically force him to remember who she is! For starters, even without the spell cast on him, it is quite understandable for the Prince not to remember Cinderella. She was dressed up in a very fancy gown and it was rather dark at the ball and now she's dressed in her rags and looks quite different from when she was at the ball. Of course, I know this is Disney, but still! Cinderella should not be so confused as to why he doesn't remember her! They'd only met that one time! Sadly, this sequel also gives Cinderella an attitude that she doesn't have in the original and that kind of took away from her whole sweet innocence. The mice,step-sisters and step-mother were still in character for the most part so that was nice.

I'm also rather curious as to why Anastasia is the step-sister who has the side stories? She found a love in the second Cinderella (and where did that baker go in this third one? After all, the second Cinderella took place right after Cinderella and the Prince married while the third one takes place about a year later). The Baker shows up in a picture during the credits so he's obviously still a romantic interest, but still, why does Anastasia get to be the one to "marry" the prince when she should already be in love with the baker?

Now after reading this review, you're probably thinking if there was anything good about it. Well, as mentioned before the story line itself is cute, though a little too close to the scene in the Little Mermaid (and on a side note, Prince Charming is voiced by the same guy who voiced Prince Eric from Little Mermaid). I will say, my favorite scene was when the mice are trying to convince Prince Charming that he's in love with Cinderella and he thinks he's going nuts because birds and mice are talking attacking him. My favorite line has to do with Prince Charming telling his father that "the mice told him he was in love with someone else" and that he had to go get her but not to worry he'll be back in time for the wedding. The king then tells him that it's not the wedding he's worried about, it's the talking mice! I laughed quite at that, and I'm even giggling right now! I have to say, there were several silly bits and it was kind of refreshing to see Cinderella looking like she'd been rung through the ringer near the end. Not that I have anything against her, it's just nice to see her not looking so fresh all the time. I think she probably even looked her age when she was about to go on the ship near the end because her hair was down (not tied back) and since she's probably between 18-20, she looked that old during that scene.

So, for children, this is a very good movie because of the silliness, but it's just not the same as the original so don't expect it to be.
3 people found this helpful

Laura H. QuaneyReviewed in the United States on August 3, 2020
5.0 out of 5 stars
Step sister happily ever after
Verified purchase
My daughter loves Cinderella and but she really likes the villain's. So this movie is awesome in the fact that one of the step sisters does also get her happy ever after. Go villain's.
One person found this helpful
See all reviews
Back to top
Get to Know Us
Make Money with Us
Amazon Payment Products
Let Us Help You
EnglishChoose a language for shopping. United StatesChoose a country/region for shopping.
© 1996-2022, Amazon.com, Inc. or its affiliates