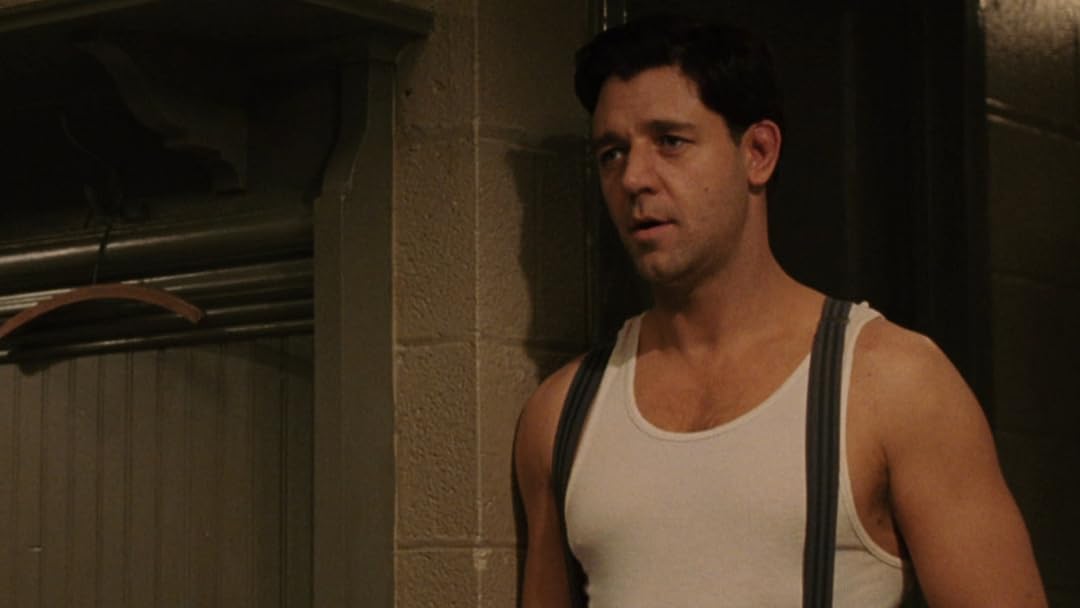 Sandy MReviewed in the United States on August 13, 2022
5.0 out of 5 stars
Great movie
Verified purchase
This was a really good movie.

Christina ReynoldsReviewed in the United States on July 25, 2020
4.0 out of 5 stars
Simple and Sweet
Verified purchase
I don't know many people that get a second chance...."

Directed by Ron Howard, 'CM' is biographical account based on the story of James Braddock; set during the period of the vreat depression, Braddock (Russell Crowe) pursues a boxing career despite opposition from his wife (Renee Zellweger) and the challenges faced during his daily life.

This movie starts with Braddock losing a boxing match and being dropped as a professional fighter. This introduction of our man characters assists the story telling in that the director gives the audience enough time to absorb the amount of information and changes that happen over the course of time without it feeling overbearing or being dragged out. For people that aren't big fans of boxing, this is helpful and encourages engagement that might otherwise not be naturally present.

On that note, the director also dpes an excellent job of showing the audience the challenges Braddock faces outside of his boxing career. He is struggling financially as work is few and far between. His children are at risk of being sent away (to be taken care of elsewhere) due to being unable to provide for his family. My point being - that the film turns in to less of a boxing movie, and is really a story about hope and overcoming advertisy at times where it is not easily found.

In addition to my previous point, the emotional range of the characters grounds this film and makes the events that occur within them seem realistic. The tone of the movie changes as much as the characters do, and the audience isn't objected to behaviors or scenes that feel exxagerated or un-relatable. My only critism is that sometimes the changes that occur over time with the characters isn't explained as well as they could have been (specifically, the attitude of Braddock's wife) but it doesn't make this movie any less of a success.

In my own research it appears that the film is historically accurate, although some (minimal) changes were made to Braddock's story specifically. I can't determine what the reasoning for this is, but it is speculated that this was done to keep Braddock in a favorable light at all times. I think that most people agree that this wasn't necessary, but it doesn't make the movie stray too far from the historical events that are portrayed throughout.

A heart warming story that anyone can enjoy. I would recommend!

Benjamin J BurgraffReviewed in the United States on December 11, 2005
5.0 out of 5 stars
Crowe Superb in Extraordinary Film Bio...
Verified purchase
"Cinderella Man", Ron Howard's heart-felt film biography of boxing legend James J. Braddock, never received the recognition it deserved when first released, due, in large part, to Russell Crowe's bad press following a telephone-throwing incident. Overzealous critics tended to lump the incident and film together, and despite Crowe's public apology, many moviegoers skipped it. Now that the film is available on DVD, it's time to acknowledge the film for what it always HAS been; director Howard and star Crowe's FINEST film, together!

Braddock's story is so amazing and inspirational, that it is astonishing that it's taken seventy years to tell it. Sylvester Stallone 'borrowed' from it, extensively, in creating "Rocky", and in viewing the film, the parallels between fact and fiction are obvious; Braddock had been an 'up and comer' in the twenties, but broken bones and ill-advised matches had cost him a championship shot. Then the Depression struck, Braddock was wiped out, financially, and he struggled to support his wife and family through the most harrowing period in American history. Considered 'washed up' and too old for a comeback, all the boxer had going for him was his wife's love, his manager's faith, and his personal integrity, which refused to allow him to give up. He tenaciously climbed back up the ranks of younger title contenders, earning the adoration of a country trying to rebuild their own lives, as well, until, finally, he had his championship match, against ruthless 'killing machine' Max Baer. Their match would become the stuff of legends!

To director Howard's credit, he never 'over-sentimentalizes' the story, or tries to turn it into a soft-focus 'fairy tale'. His vision of the Depression is the most accurate and heartbreaking since the documentaries of the '30s, and will come as a revelation to those whose only knowledge of the period is a paragraph in a history book. Jim Braddock is not a 'Superman', but a hard-working, decent man with no higher vision than to provide his family a better life, and as magnificently portrayed by Crowe, he embodies qualities of honesty and dignity that many of us dream of, but seldom achieve. In any other year, he'd be a shoo-in for an Oscar for his performance, it's that good!

Matching Crowe's portrayal are Renée Zellweger, as his loyal wife, Mae, who perfectly channels a '30s 'style', as well as a gutsiness that is timeless, and the wonderful Paul Giamatti, as manager Joe Gould, who would sell everything he owned, rather than see Braddock give up. Giamatti, a veteran character actor who finally saw his 'breakthrough' in last year's "Sideways", should finally get his long-deserved Oscar, for this role.

"Cinderella Man" is a film that will continue to be cherished long after the filmmakers are gone, a tale rooted in an earlier era, but still timeless.

Movies just don't get better than this!
98 people found this helpful

Donegal DanReviewed in the United States on January 8, 2006
5.0 out of 5 stars
His Own Man and Its Own Movie
Verified purchase
This movie is not Million Dollar Baby nor is it the same story. It is a true story that depicts an honest boxer who is his own man just as the movie is its own movie. Russell Crowe, whose conduct in private life is sometimes incomprehensible, turns in another outstanding performance, hitting just the right note in every aspect of this character study and establishing yet another star in his acting crown. His Jimmy Braddock is that increasingly rare creature--a plain, decent man who loves his wife and children and rises to astonishing levels trying to take care of them. Crowe's performance does not exaggerate or unduly emphasize the heroic aspect of the Braddock story; rather, it seems to flow naturally from the basic nature of the man, which is what makes it such a great achievenent in acting. Renee Zellweger keeps up with Crowe in her portrayal of Mae, his wife, a woman of the 30's in every way but no pushover. Paul Giamatti is terrific as Joe Gould, Braddock's manager , and the rest of the cast is uniformly excellent. The depiction of the Depression is very effective without becoming the whole story. It was a terrible time in this country and it brought out the worst and the best in the people who lived through it, as we see in this film. The movie does have a "Seabiscuit" kind of appeal and Braddock was obviously a figure of admiration and hope to the millions of poor and dispossessed during those years, just as Seabiscuit was. In all, this movie is a classic--while the boxing scenes (and there are a lot of them) are a little hard to take if you are not a fan of violence on the screen, they are so well done and so integral to the story that I did not find them offputting--just a part of Braddock's life. Finally, if you are Irish-American, as I am and as Braddock was, it recreates the difficult circumstances in which many of your forbears (and most immigrants) struggled when they came to this country and the obstacles they overcame, an heroic story in itself. See this movie and see it with your family; and be sure to watch the special features, too, to see photos of the real Braddock and his family, and to hear from Ron Howard, Russell Crowe and others what went into making this extrordinary film.
2 people found this helpful

Annie Van AukenReviewed in the United States on October 3, 2011
4.0 out of 5 stars
Jim Braddock: "I have to believe that when things are bad I can change them."
Verified purchase
Ron Howard is a great director (love [[ASIN:0783226810 FAR AND AWAY]]!), but he's no brainiac when it comes to keeping facts straight. On his commentary track for CINDERELLA MAN, an often fictional bio of heavyweight champ Jim Braddock, Howard ID's an Eddie Cantor song as being by Eddie Fisher and claims that Max Baer killed two men in the ring.

One, Frankie Campbell, took a terrible beating from Max and died the next day in a hospital. Max was charged with manslaughter and acquitted. The second that Howard must be referring to is Ernie Schaaf. In their rematch, Baer beat the tar out of Schaaf, who suffered from bad headaches after this bout. He died five months later from a Primo Carnera left jab. Baer's previous thrashing may have set up the tragedy, but he didn't kill Ernie Schaaf in the ring.

.
This distortion of fact is apparent in Howard's film as well. Baer's prominent Star of David has been excised from his boxing trunks, and as original footage of their 6/13/35 belt battle shows, Baer never cup-punched Braddock, never slapped him in the face, and never turned to answer Jimmy's manager and caught two sucker punches from Braddock.

As entertainment, it works, and very well. The ring sequences are skillfully assembled, Crowe is believable as a boxer, costars Zellweger and Giamatti are both excellent and the recreation of Depression Era mid-1930s is spot-on, but for anyone with knowledge of the actual Braddock/Baer fight, this movie can get a little annoying in that last crucial sequence. Still worth seeing.

ErinReviewed in the United States on March 23, 2022
5.0 out of 5 stars
Great movie!
Verified purchase
delivered fast , perfect condition!
See all reviews
Back to top
Get to Know Us
Make Money with Us
Amazon Payment Products
Let Us Help You
EnglishChoose a language for shopping. United StatesChoose a country/region for shopping.
© 1996-2022, Amazon.com, Inc. or its affiliates