You've subscribed to San Diego Social Scene! We will preorder your items within 24 hours of when they become available. When new books are released, we'll charge your default payment method for the lowest price available during the pre-order period.
Update your device or payment method, cancel individual pre-orders or your subscription at
Your Memberships & Subscriptions
There was an error. We were unable to process your subscription due to an error. Please refresh and try again. 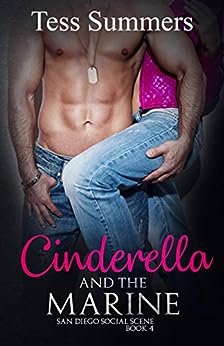 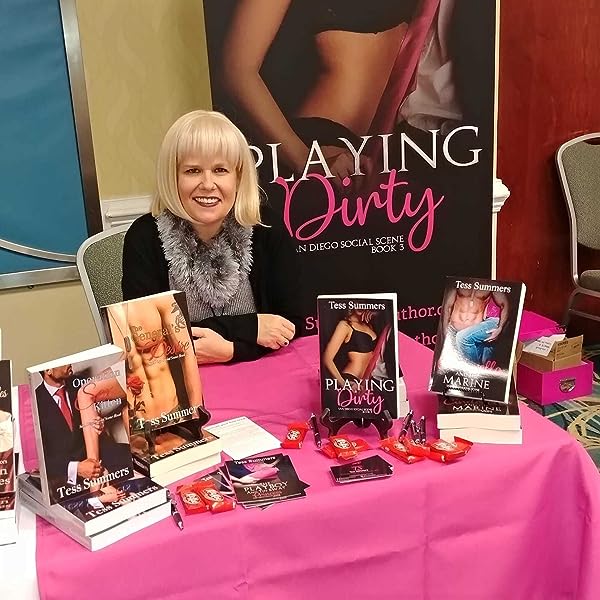 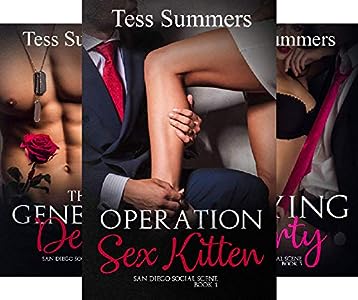 Tess Summers, a former businesswoman and teacher, always loved writing but never seemed to have time to sit down and write a short story, let alone a novel. Now battling MS, she has finally slowed down enough to start writing all the stories shed been wanting to tell, including the fun and sexy ones. Married over twenty years with three grown children, Tess is a former dog foster mom who ended up failing and adopting them instead. She and her husband (and their six dogs) split their time between the desert of Arizona and the lakes of Michigan, so shes always in a climate thats not too hot and not too cold, but just right.

4.5 out of 5 stars
4.5 out of 5
448 global ratings
How are ratings calculated?
To calculate the overall star rating and percentage breakdown by star, we don’t use a simple average. Instead, our system considers things like how recent a review is and if the reviewer bought the item on Amazon. It also analyzes reviews to verify trustworthiness.
Top reviews

zoey
TOP 1000 REVIEWER
2.0 out of 5 stars how old is the H again?
Reviewed in the United States on February 21, 2021
Verified Purchase
Spoilers

The h is a twenty five year old single mom to a three year old son. She’s a college student struggling to make ends meet working as a waitress. She meets the thirty five year old H when she waits on him at the diner. The H is in the Marines. He is immediately attracted to her large boobs. He even gives her the nickname Kaytits. Her name is Kate. They get into an on and off relationship but find their HEA.

No likes: the H was a jerk. He was really fixated on the h’s boobs for a long time in the beginning of the story. He was thirty five years old but was acting like a horny teenager. The H expected the h to pack up and move across the country after she had accepted his marriage proposal without talking to her about the move. Then he got mad when she didn’t want to move with him. The h was also unlikable. She was hot and cold the entire story. She kept giving the H confusing signals. She wanted him but pushed him away. Then said this but pushed him away. She was playing him like a yo-yo. The story could have been twenty percent shorter. There was a lot of fluff towards the end.

Nki
1.0 out of 5 stars If I met a Marine like this, I'd run
Reviewed in the United States on March 4, 2021
Verified Purchase
I live in a military town full of Marines(near Camp Lejuene)and about the only thing I think this story got right was the love of cars/ muscle cars. The guy, to be 34 yrs old, seemed like a Boot who was on a desperate search for a contract marriage, need to knock a chick up to get outta base housing/ singles quarters and get a pay increase for added dependants/BAH . Yes, the guy seemed that desperate. This guy just seemed so needy and desperate for a baby that it became annoying. The over-use of calling his intended future baby mama "baby gir" was also highly annoying and overdone. If a guy called me that as much as this guy did, I would think he was a player who forgot my real name. It's just kinda sleezy, not original and not really a term of endearment, at least for me anyway. The guy also seemed to know rather quickly after going to the diner a few times that this girl was THE one. The girl was so wishy-washy that if I had been this guy I would have put my two fingers up and said "deuces" a long time ago. The chick was just not worth all that headache with her constant mental back and forth. Girl, If a guy makes you question his motives, or your own thoughts that much, then thank you, next. I ended up skipping through most of the book to the end, and as I thought, it was a highly formulaic clićhe ending. Also, my thoughts, I wonder how many deployments this guy had gone through? Because to me he seemed rather well adjusted. No issues of PTSD, depression or heavy drinking stated as a backstory. Those things seem to be common problems when people in the Marines or any branch of military have deployed, have acquired years of military service or just dealing with the overall stresses of military life in general. This book just didn't seem believable to me. I think this was my second time trying to read a book by this author because the synopsis drew me in. I will make sure to avoid this author in the future though.
Read more
One person found this helpful
Helpful
Report abuse

Kim Lubbers
5.0 out of 5 stars Great Read
Reviewed in the United States on October 5, 2018
Verified Purchase
Cinderella and the Marine by Tess Summers is a great book. This is book four in the San Diego Social Scene series. This is the story of Cooper and Katie. Cooper is a marine and when he visited his friend who just had a baby he decided he was ready to have a child and settle down. Katie is a college student, waitress, and a single mother. They meet after Cooper leaves the hospital and decides to stop for lunch at the diner where Katie works. He had an instant attraction to her but was only looking for one last one-night stand before he settled down. Katie refused to go out with him but after he used his charm on her she caved. Katie has some deep emotional scars caused by her ex and her parents from when she got pregnant. Will Katie overcome her past to let Cooper in? Will one night together be enough? Will Cooper decide she’s the one for him? Will they get their HEA? I loved this story but really wanted to smack Katie at times. This was an emotional rollercoaster ride with twists and turns and had angst, romance. This was the first book I read by Ms. Summers and I definitely recommend it. I can’t wait to read more from Ms. Summers.
Read more
6 people found this helpful
Helpful
Report abuse

Anna
2.0 out of 5 stars Well that fell stupidly flat
Reviewed in the United States on April 22, 2021
Verified Purchase
Let me start by saying that this story had (operative word being HAD) serious potential. Due to that simple fact, I provided two stars. There were a few things that really annoyed me throughout reading this. For whatever reason, the author was only able to utilize “Snarled” for anything other than horny or happy moods. That alone irritated me. The characters became increasingly annoying as the story dragged on and on and on.... Get the point yet? Oh, wait...no she’s not “all in” so I’m going to go feel up another woman even though I’ve professed my love to her literally two minutes ago. But that’s not all! Katie was just as annoying as a wooden rollercoaster jerking you around everywhere. The characters gave me whip lash. Last negative rant (I promise), why oh why, do authors insist on making the characters tear up and cry SO much? Look, we all have human emotions and it’s normal to cry, but seriously? Every ten minutes someone was crying. Anyway, this book was just super unrealistic to me and it was hard to get through the remainder of the story because it was filled with so much fluff. This book could’ve been amazing and SHORT.
Read more
Helpful
Report abuse

ldr10
2.0 out of 5 stars Seriously make up your mind
Reviewed in the United States on February 20, 2021
Verified Purchase
I was really excited about this book and I liked both characters. But Katie got more and more annoying as the book went on. All this stuff about how she could only rely on herself when she was getting help from other people. Cooper loved her so much and she said she loved him but then got mad when he tried to help her. It just got ridiculous. Very disappointing.
Read more
Helpful
Report abuse

Catsie82
3.0 out of 5 stars Good, Not Great, But . . .
Reviewed in the United States on February 24, 2021
Verified Purchase
This book started out okay -- good, not great, but worth continuing. By the time I got 3/4 of the way through, the heroine had become so terminally stupid and mean that the wonder is that the guy didn't head for the hills. Very disappointing from there on out. The only reason I kept reading was because I was too lazy to get up and download the next book.
Read more
Helpful
Report abuse

Kindle Customer George
4.0 out of 5 stars Fair read
Reviewed in the United States on February 24, 2021
Verified Purchase
I chose a four rating because I thought it dragged a little to much in the middle of the story. I would have enjoyed seeing her parents coming forward in the end.
Read more
Helpful
Report abuse
See all reviews

Catherine Gardner
5.0 out of 5 stars Just Great
Reviewed in the United Kingdom on June 22, 2019
Verified Purchase
There's nothing much to dislike about this novel. Romantic, funny and addictive. There was just one thing that had me cringing. Cooper kept calling Katie "baby girl" for a start it made me want to put my finger down my throat it was so cringworthy and fake. But when I would read about how sex was so fantastic with his baby girl??? Or he even referenced sex and his baby girl ugh it took on a whole new meaning and I was uncomfortable with that pet name. Cut out the daft pet names it's not romantic. Honey will suffice or sweetheart.😊
Read more
Report abuse

Rosie
4.0 out of 5 stars Happy family
Reviewed in the United Kingdom on November 29, 2019
Verified Purchase
Katie was such a stubborn woman poor Cooper didn’t know whether he was coming or going. Glad he hung in there. Epilogue made everything right with the world.
Read more
Report abuse

Linda May
4.0 out of 5 stars A different but sweet story line....
Reviewed in Canada on November 7, 2019
Verified Purchase
So nice to read of a big burley guy who wants a wife and kids, then meets his match in a diner.
Great sexual chemistry, with an unusual “discontent” that actually gets these two lovers to work out a solution to what could have caused an irreparable break up and broken hearts all around.
Read more
Report abuse

Kindle Customer
4.0 out of 5 stars Surprising depth
Reviewed in Australia on February 19, 2021
Verified Purchase
This story had depth I wasn't expecting, bonus! Both characters, Katie and Cooper had insta last & attraction, with Cooper being adorable and wanting more...hubba, hubba
Read more
Report abuse
See all reviews