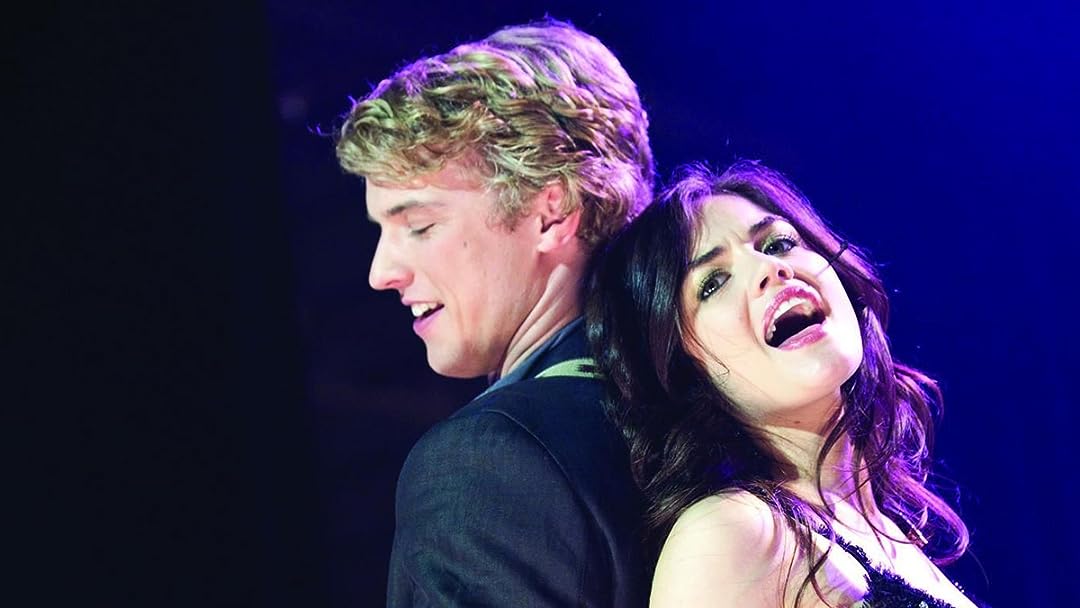 A Cinderella Story: Once Upon a Song

(1,804)6.01 h 28 min2016X-RayPG
When Katie falls hard for the new boy at her Performing Arts school, she tries to get his attention with her singing. However, her stepmother has other ideas.

Amazon CustomerReviewed in the United States on May 9, 2017
3.0 out of 5 stars
Mediocre acting with a cliche story line
Verified purchase
Hale has an amazing voice, there's no denying that. I think this movie is a great take on the Cinderella concept that everyone loves, but in some parts of the movie the acting comes across as forced and awkward. Granted, this is a movie aimed to an audience who are probably 11-14, and I'm sure if you were actually in that age range, you'd like it more.

There are scenes that seem to go on for too long and are totally unnecessary to the story line like the dance scene where they have a 'dance battle'. The singing scenes also seem longer than they need to be, giving an awkward atmosphere.

Overall, the movie is a great addition to the 'Cinderella Story' franchise. It show unexpected love in unconditional ways and gives a good pedestal to showcase the actors' talents. If you just want a cliche love story with some singing and dancing thrown in, this is a good movie to rent.

NatashaReviewed in the United States on April 29, 2016
5.0 out of 5 stars
Definitely recommend, its cute.
Verified purchase
Its cute, funny, and has a couple of emotional scenes that show character growth (won't spoil who the growth is for). Has it been done before? Of course it has its a Cinderella story. Does it matter? Nope. Its a modern Cinderella so the plot is pretty predictable. However it does have a bit of a different take on it. It has awesome music, wonderful chorography, and a mischievous little step-brother that will make you laugh. I would definitely recommend to anybody who likes reimagined Disney story's. Its a nice, modern take of a well loved classic.
3 people found this helpful

Bob FarrellReviewed in the United States on January 12, 2020
4.0 out of 5 stars
Fun
Verified purchase
Very Chinderella-y. The step-family is a tad over the top ... okay, way over the top, but the ensuing love story and singing make this a fun, entertaining movie.
One person found this helpful

kybrdplyrReviewed in the United States on February 18, 2013
5.0 out of 5 stars
Ridiculously addictive
Verified purchase
It seems I can watch as many Cinderella take-offs as there are film producers who want to make them. This one pops for me - I watch it because it is a silly amalgam of Grimms, teen-pop, and Bollywood and, for some reason, the gross-out humor and sly asides with the cute, to-die-for hunk who sings like a million bucks but has a rich dad and the step-mom, bejeweled and as narcissistic as they come, well, it all just works. Lucy Hale has range and like any good Cinderella character, ends up on top but not before some nail-biting and back-biting. A funky adaptation with good music, good performances, silly and romantic. I have watched this one WAY too many times!
2 people found this helpful

Just_a_regularReviewed in the United States on May 9, 2020
5.0 out of 5 stars
Good buy
Verified purchase
I love the Cinderella live action movies. This was a good addition. To another Cinderella story and a Cinderella story. Great condition. Came fast. Would buy again from seller.

H. BalaReviewed in the United States on January 20, 2016
4.0 out of 5 stars
Cinderella is a Pretty Little Liar
Verified purchase
Since I am an out of touch old fogey, I'm not much down with what's trending. I stumbled upon Pretty Little Liars on ABC Famil- ahem, pardon, Freeform - and actress Lucy Hale right away struck me as someone familiar. Turns out, she starred in A Cinderella Story: Once Upon A Song, a cheesy but entertaining 2011 kid movie I watched while babysitting. It's one that caters to a specific demographic - the tween girls. It's replete with camp and corn and humor that's as subtle as a pie mashed in the face. It's the third stand-alone installment, following A Cinderella Story (2004) and Another Cinderella Story (2008).

Poor 17-year-old Katie Gibbs (Hale), reduced to playing scullery maid to her cruel step-mother and her atrocious children. And since the step-mom, Gail Van Ravensway (Missi Pyle), is also dean to the Wellesley Academy of the Arts, the prestigious private school Katie attends, there's no respite to our girl's misery.

Katie is an aspiring singer with a gorgeous voice and a knack for songwriting. See her perk up when a renowned British record producer shows up at school and assigns his teenaged son, Luke (Freddie Stroma), with producing (and scouting) the school's semester showcase. The mean dean is also ecstatic. She sees it as a chance for her daughter Bev (Megan Park) to land a recording contract. But here's the rub: Bev cannot sing. She sounds like cats in a room full of rocking chairs. The dean arrives at a brilliant idea: Why not have Katie lay down the vocal tracks and have Bev take credit? An outraged Katie plays along under threats of being sent to foster care and the loss of her come-of-age inheritance.

Should you ever wonder what it'd be like were a movie to fuse elements of Cinderella and Cyrano de Bergerac, look no further than here. Yes, it's ridiculously over-the-top, thanks to an unapologetically hammy script and that horrible brat (Matthew Lintz) and that in-house guru (Manu Narayan) and, mostly, to a mugging Missi Pyle. Maybe you'll find her hilarious. Good for you, then. To me, Pyle's super-exaggerated take renders her character a buffoonish cartoon, and, for that, the movie loses points with me. Next to what Pyle has wrought, Park's vacuous step-sister seems the epitome of groundedness.

There are good things that counter the bad bits. Some of the comedy works, like the recurring gag where bands keep auditioning to Luke in the men's restroom. Most importantly, Hale and Stroma are sweet together and there seem to be sparks. Hale's screen presence alone makes this movie watchable. But the songs are also listenable, specifically the original tracks performed by Hale and by Stroma. Stroma's "Knockin" has got this upbeat, tap-your-toe groove. His all-too-fleeting colab scene of "Possibilities" is a highlight. Hale, for her part, has got this strong, marvelous singing voice. She does well with a series of snazzy, club-type jams, but she shines most when she eases back on a stripped-down acoustical song like "Extra Ordinary." Note that you'll have to jump on YouTube to get the full version because you only get to hear an inadequate snippet in the film. Actually, for proper enjoyment, you'll probably have to access YouTube for the full tracks. Or, I guess, buy the soundtrack. Yeah, you should buy the soundtrack. 3 or 3.5 out of 5 stars for this one.

William ClarkReviewed in the United States on October 14, 2013
5.0 out of 5 stars
Review of movie"A Cinderella Story:Once Upon a Song"
Verified purchase
I love any kind of movie that has a Cinderella theme(the one where she's bullied by her cruel stepmother and stepsisters,but then meets her true love-her Prince Charming-and their relationship develops,and in the end,she breaks free of her stepfamily's cruel shackles,and her and her true love live happily ever),and the extra music theme adds some good spice to the movie.
One person found this helpful

Jennifer HemphillReviewed in the United States on June 18, 2021
5.0 out of 5 stars
Good movie
Verified purchase
Great movie wish we could watch rentals more than once
See all reviews
Back to top
Get to Know Us
Make Money with Us
Amazon Payment Products
Let Us Help You
EnglishChoose a language for shopping. United StatesChoose a country/region for shopping.
© 1996-2021, Amazon.com, Inc. or its affiliates