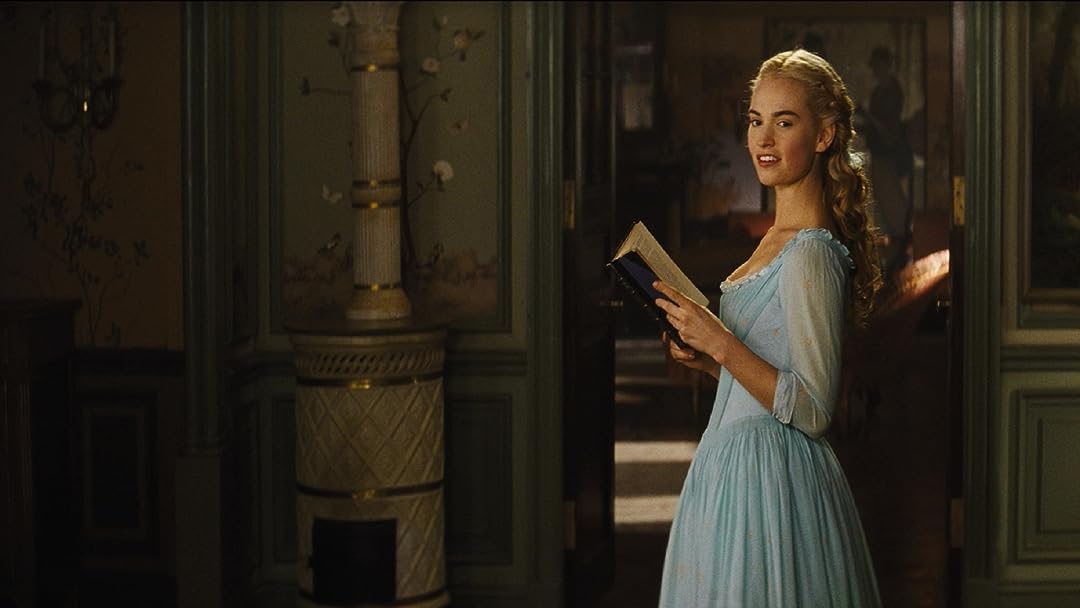 (20,205)
6.91 h 45 min2015X-RayHDRUHDPG
In this live-action retelling of Disney's animated classic, young Ella escapes from a life of drudgery by way of a fairy godmother whose magic brings Ella face to face with the prince of her dreams.

RaechelrocksReviewed in the United States on October 7, 2017
5.0 out of 5 stars
Excellent Movie!!
Verified purchase
I finally purchased this movie after renting it over a dozen times. Every time I watch it....it makes me happy. Cinderella being my childhood favorite Disney movie and character...I never thought a version would ever be as good as that original Disney version that I loved as a young girl but this is just beautiful in every way. The dress, the acting, the characters, the scenery....everything breathtaking and beyond imaginable. I love it and as a "not so young woman" I find it truly encouraging as the message is truly inspiring... I will be buying the DVD as well but I now have a digital copy to watch whenever I want. Lovely....Thank you so much. I am not sure who reads these reviews but if any of the writers, producers or those involved were to read this I hope they know that they made a woman very happy and they did an amazing job!.
132 people found this helpful

ErinReviewed in the United States on February 19, 2018
1.0 out of 5 stars
Counterfeit DVD
Verified purchase
This is a counterfeit movie; it is not made by Disney and had been pirated. There are even spelling errors on the printed material.
78 people found this helpful

Suzy DitteReviewed in the United States on April 2, 2017
5.0 out of 5 stars
This Cinderella is VISUALLY a Beautiful Masterpiece!
Verified purchase
WOW, this film is just STUNNING! I loved it. It's STILL a great Cinderella story but on steroids! The cinematography is OUTSTANDING and all the actors are FABULOUS, especially Kate Blanchett, who plays wicked so spectacularly and Lily James is fantastic as Cinderella AND Helena Bonham Carter is UNBELIEVABLE as the Fairy Godmother, and so funny too! She is HILARIOUS!!! It's the same beautiful story, but just done so much more beautifully. I LOVE this latest version. I HIGHLY recommend this film. You WON'T be sorry!
78 people found this helpful

SmellyCatReviewed in the United States on October 7, 2017
5.0 out of 5 stars
A touching story about inner beauty, strength and resilience
Verified purchase
I'm one of those cynic people who think fairy tale films are boring and only for kids. I was not interested in watching this when it came out, and thought "Into the Woods" would be more suitable for my taste. I was soooo wrong! While Into the Woods couldn't have disappointed me more, I was really surprised how much I enjoyed this Cinderella! So much so I watched it TWICE within the 3 day rental period! And trust me when I say I would watch it again had my rental not expired! :(
What I expected to be a boring retelling/remake of the Disney version, was in fact a touching story about inner beauty, strength and resilience, or to quote them film "kindness and courage". I am really pleased that they added depth to the character of the prince and to why Cinderella and him are attracted to each other. The chemistry between the main characters is palpable. Cate Blanchett is fantastic, as always. She can do no wrong! The costumes and sets are magnificent!
Kenneth Branagh never disappoints. He really is a master at storytelling. It makes me want to see all his films again, starting with Hamlet.
This film delivers a very positive message to children, boys and girls alike, while being entertaining for adults as well, so I'm giving this 5 stars and 2 thumbs up! :)
(edited because of typos)

WilliamReviewed in the United States on February 4, 2018
5.0 out of 5 stars
It’s a great movie!
Verified purchase
I’m nearly 60 years old. I know the story line. I knew what was going to happen. But I was glued to the screen, along with my 3-yr-old granddaughter. The special effects were incredible—-especially the dress Cinderella wore to the ball, and the conversion of the carriage back into a pumpkin
42 people found this helpful

Beans1975Reviewed in the United States on September 26, 2017
5.0 out of 5 stars
A Pleasant Mix of Brothers Grimm and Disney
Verified purchase
I love this live version of Disney's Cinderella, and I say this because it has tones much closer to that of the Grimm Tales. You see, Cinderella wasn't a happy, happy, joy, joy story as told by its originators, the Brothers Grimm. The stepmother was vicious beyond reproach, the sisters were so full of themselves and selfish, all of them so incorrigible and psychotically narcissistic that it's a wonder poor Cinderella didn't end up making an end of them in their sleep. These stepsisters and stepmother are so much more authentic, and the entire movie makes you reel with anger at how they treat Cinderella. Oh the humanity!

Some folks who were expecting the live duplicate of the cartoon may dislike the authenticity of the villains of this story, but if they would just bother to read the Brothers Grimm tales version...they would find that Disney really prettied up those maliciously grim tales. We should all just count our lucky stars that the stepmother didn't cut the toes off her daughters just to get their feet to fit in the slipper (Grimm Tales my friends).

Jacqueline Euan GonzalezReviewed in the United States on July 25, 2017
1.0 out of 5 stars
Don't buy it
Verified purchase
This DVD did not work for me. I believe that it was a bootleg. I am very upset with my purchase and amazon. I have made contact to return it for a refund
44 people found this helpful
See all reviews
Back to top
Get to Know Us
Make Money with Us
Amazon Payment Products
Let Us Help You
EnglishChoose a language for shopping. United StatesChoose a country/region for shopping.
© 1996-2022, Amazon.com, Inc. or its affiliates