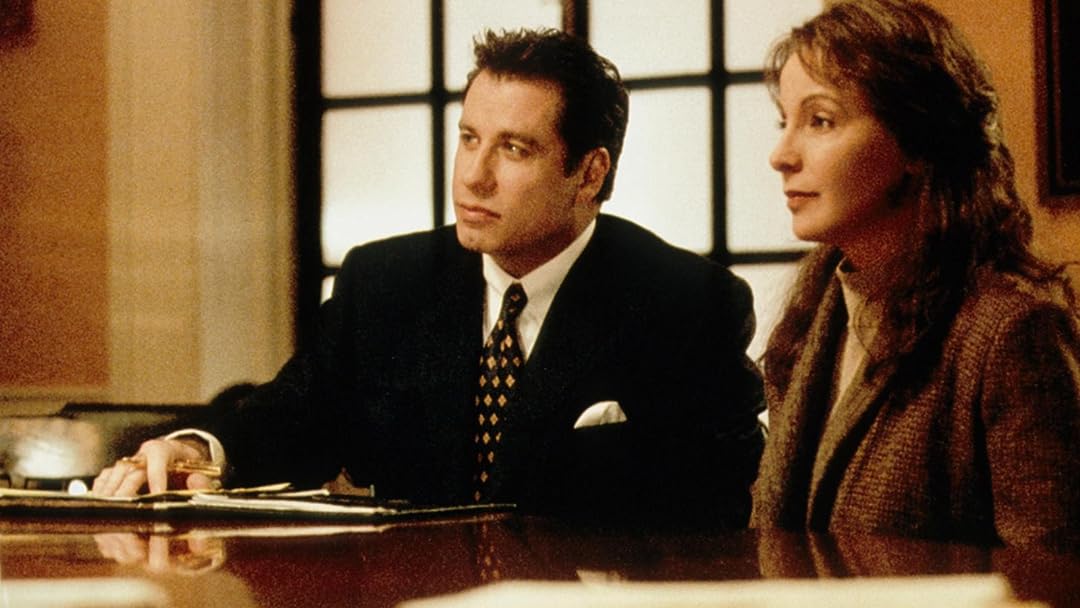 Rebecca ManringReviewed in the United States on April 18, 2018
5.0 out of 5 stars
RECOMMEND!
Verified purchase
This is a great movie - Not the typical hero-type but rather a movie showing how good intentions can be mixed with personal motives, the growth that can happen in an individual, and the lives that are affected in the meantime. Actions have consequences - which is seen in obvious ways (the companies whose pollution killed kids) and in not so obvious ways (the slick lawyer whose bravado almost ruins the lives of his partners and ignores the desires of his clients). Read up about Jan Schlictmann after you watch it - it's quite the story of how someone can morph into a completely different person. This case is what did that for him. This is the "turning point" in his life. I recommend this movie!
16 people found this helpful

JackieReviewed in the United States on December 14, 2018
5.0 out of 5 stars
he then sees "deep pockets" affiliated with the tannery like Beatrice.
Verified purchase
Fascinating film based on a true story. A Civil Action keeps you intrigued from start to finish. You get the inside line on
what some would call "an ambulance chasing" attorney. In the beginning of the film he is on top of the world due to all of
his wins in the court...he is named "Eligible Bachelor of the town"....basically he is at the top of his game. Then he is on a radio
show program and a woman calls in to the show saying that his firm has done nothing on her case which his firm has had for
some time. Once he goes back to his team and office he decides to address the plaintiffs and their case in person...meaning dump
it. He goes to the town of Wooburn and listens to the families who have gathered and who are all plaintiffs in the case. Apparently
a local tannery has been dumping poisonous substances illegally and the towns children and families are dying or affected.
He tells them all he cannot take the case. The woman who called the radio show encourages him to just go out to the site and
"take a look for himself". Grudgingly he does.....he then sees "deep pockets" affiliated with the tannery like Beatrice...que the "cha-thing" sounds in his head and off he goes to the races. He decides to take the case. Now, I will leave this here because you will be amazed by how fast the
starch is knocked out of him and I don't want to tell you too much. You will get a taste of just how cunning corporate lawyers are and you will see just how easily a "David and Goliath" case can be gutted....how crooked indeed. In the end no one wins. Children have died and people's lives have been affected. But in the end what is right triumphs... in a way....you witness the renewal of a mans perspective on life and those that use and abuse the environment and humanity are held to account. The film, to me, seemed to be a sleeper...but a really good one. You have a stellar cast. Travolta is on point and ever the enthusiastic actor. William Macy is phenomenal as the accountant for the firm. Robert Duvall hams it up but he is also very good LOL. You even get to see another side of the late, great James Gandonfini. John Lithgow is the perfect, arrogant judge and Tony Shalhoub is in the cast. Trust me, on a nice quiet, rainy day for movies...this is a great choice. Enjoy.

I can highly recommend this film.

AllisonReviewed in the United States on March 22, 2021
2.0 out of 5 stars
Skips important parts, not true to the book
Verified purchase
I had to read the book "A Civil Action" this summer before my first semester of law school and it was SUCH a good book! The author does a great job at really illustrating the motives and feelings of all the characters, not painting any in a light more favorable than the others. And what would normally be boring legal civil procedure is made interesting and dramatic by the story and the way it's framed. I highly recommend the book but cannot do the same for the movie. The movie understandably has to cut some things but what it really does is simplify the story until it is unrecognizable. It boils down the characters to the point that they are simple and one-dimension and unrecognizable to the characters (real-life people) in the books. It also tries to simplify and dramatize the storyline, which ends up removing all of the ambiguity that the characters are facing. In my opinion, the best part of the book is that you can see why each character feels the way they do and how they are struggling with a complicated situation with no good options. This makes characters "good" or "bad" and puts them in simple situations where they have to make simple "good" or "bad" choices. I can't recommend this movie - save your money and your time and go watch My Cousin Vinny again or something.
One person found this helpful

Chad MReviewed in the United States on January 10, 2022
4.0 out of 5 stars
Good movie. Many realistic features mixed nicely with movie drama.
Verified purchase
In the 1970s and 1980s personal injury law expanded into new areas. Cancer lawsuits that tried to link industrial pollution with individual cancer cases like the ones in Woburn MA were big news. This movie focuses on the personal competition between Jan Schlichtman (playbed by John Travolta) and several large law firm attorneys (Jerome Facher, played by Robert Duvall) and does a good job of taking highlights from the non-fiction book by John Harr (many people prefer the book). The large law firm lawyers working for the dry cleaning chemicals company (WR Grace) and the tannery (Beatrice) tried to show that soil and geology near the Woburn's town wells would have blocked toxic chemical pollution. For what was essentially a very technical matter there were many dramatic moments in this film.

The relation of big industry to middle class families is a powerful theme, and part of what makes this movie very good. When law firms mediate between the middle class and Fortune 500 companies the results are mixed. The way lawyers creatively pursue their client's stated goals or legal services contracts is also a good theme, how many financial resources come in play, is both a message of hope and a warning for all sorts of clients, plaintiffs, and defendants.

Trish SwainReviewed in the United States on November 10, 2017
4.0 out of 5 stars
Great acting, a story well told.
Verified purchase
A cast of terrific actors. This legal story , based on a true case, keeps focus on the sacrifice made by a small time legal firm battling the forces behind bigtime commercial pollution. This skillfully made film should be a model for many others because it does not descend into romance or other Hollywood stuff. We strive and suffer along with Travolta, Macy, Shaloub as they meet the expenses of a major lawsuit. Duvall is brilliant as the eccentric corporate lawyer and we even get a quick cameo from Stephen Fry.
10 people found this helpful

Becki MerrittReviewed in the United States on February 24, 2015
4.0 out of 5 stars
A Civil Action - John Travolta
Verified purchase
This is a true story about Jan Schlichtmann, along with his team of 4 ambulance chasing partners, defends local families who are affected by death and disease caused by contaminants from W R Grace's Massachusetts plant. After mortgaging everything they have, and using personal savings the firm disburses and they are forced into an $8M settlement to pay off loans and divide a modest amount between the affected families. Feeling that he isn't satisfied with the outcome, he sends paperwork to the EPA, as proof that Grace and Beatrice Foods have presented false information to the EPA about the way the contaminates have been collected and disbursed. John Travolta is very good in his role, but I feel Jan Schlictmann should have looked for other means (larger law firms) to backup his defense for his defendants.
11 people found this helpful

Ja SteasyReviewed in the United States on September 13, 2021
5.0 out of 5 stars
Good Actors. Good Story
Verified purchase
Lots of leads in this one! Without speaking to the specific content of the story, it is well-written and well-acted. Duvall hits a homerun (as he tends to) and Travolta plays a surprisingly self-aware role as the lead attorney for a small firm. Could have used more Tony Shalhoub, but all of the other actors are great! (Shalhoub is as well, but is under-utilized). Worth a watch... and another... and another...

lbrlartistReviewed in the United States on March 6, 2012
5.0 out of 5 stars
Quietly stupendous!
Verified purchase
As I am finishing replacing my last 100 commercial vhs tapes with dvd's, the question is always "do I want/need to see this again?" I pondered this with A Civil Action and decided that especially since it is NEVER on any of the movie channels, I should replace it with a dvd. SO glad I did.

Unlike the happier endings given to us in truly memorable films like The Verdict and Erin Brokavich, A Civil Action gives us what usually happens in such lawsuits - they go on for years and years, with no resolution, until the plaintiff dies or just quits in frustration.

I am a huge John Travolta fan, but even I was surprised with the depth of character he touches in his portrayal of Jan Schlichtmann: arrogant, cocky and yet ultimately committed to a cause he did not go looking for.

Robert Duvall is as wonderful and effortless as ever. Despite his character being on the "wrong" side, his portrayal forces the viewer to make the distinction between the job a person does and who the person is.

This is a subtle little gem that I almost let slip away from me. That would have been a real shame.
7 people found this helpful
See all reviews
Back to top
Get to Know Us
Make Money with Us
Amazon Payment Products
Let Us Help You
EnglishChoose a language for shopping. United StatesChoose a country/region for shopping.
© 1996-2022, Amazon.com, Inc. or its affiliates