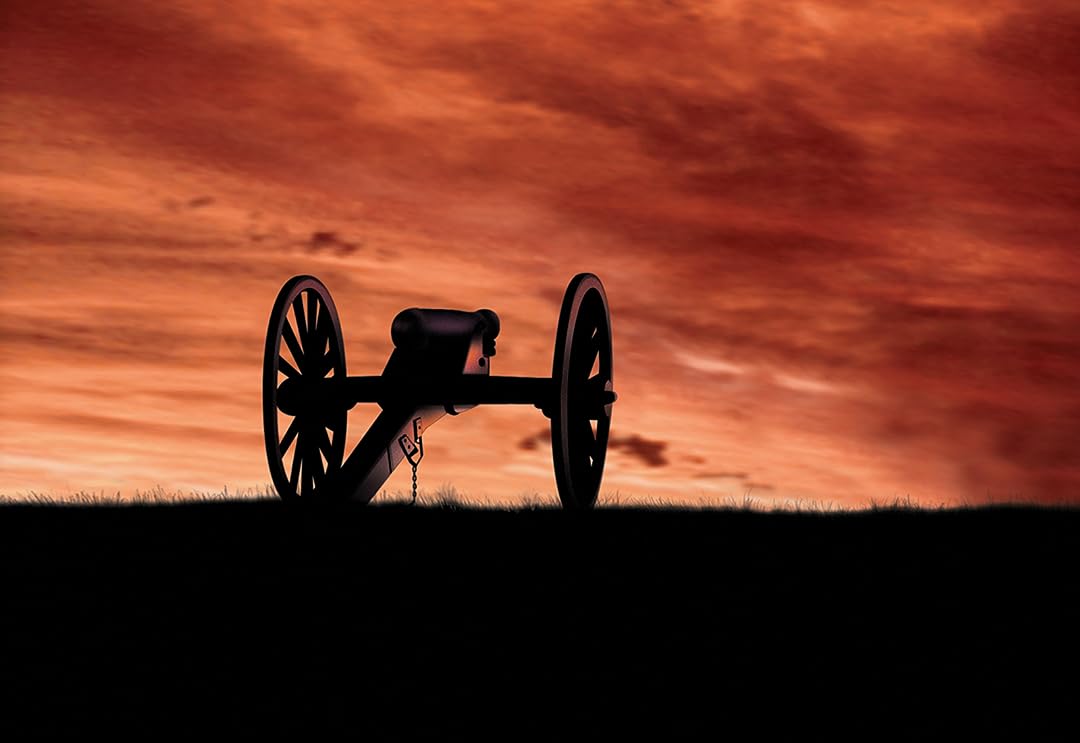 The Civil War: A Film By Ken Burns

Watch with PBS Documentaries
Start your 7-day free trial
Add to
Watchlist
Redeem a gift card or promotion code
By ordering or viewing, you agree to our Terms. Sold by Amazon.com Services LLC.
Write review

AnnShamrockReviewed in the United States on July 16, 2020
5.0 out of 5 stars
i had no idea. i Highly recommend
Verified purchase
ok, well FIRST. its Ken Burns so you can't go wrong. I decided to buy this series to learn more about the CIVIL WAR after all this controversy with the taking down of the Confederate statues in America (summer of Black Lives Matter and COVID 2020.) This was made around 1990??. pre-President Clinton, Bush, and Obama so there is NO POLITICAL BIAS as to the "telling" of the Civil war. Ken tells it like it was. I learned a lot. I learned that the South wanted to own slaves and that almost 1 million soldiers died and anyone who still is proud of the Rebel flag is probably racist. (my words not the documentary). This was a horrible war. WATCH THE DOCUMENTARY and see for yourself
15 people found this helpful

richard e whitelockReviewed in the United States on July 13, 2018
5.0 out of 5 stars
A MUST TO WATCH
Verified purchase
Ken Burns is an amazing story teller. His films are both monumental and very personal in scope. He covers the Civil War topic from ground zero. His conclusions are well documented and he pulls "no" punches. To better understand the why's and how's of America's war against itself, you must review all the episodes and then read every book and reference work you can find on the CW.

Great vintage photographs which have rarely been viewed come alive in these episodes.. As the Civil War gets smaller and smaller in our rearview mirror of life, it is very important that we have a library of video content which will always be available to remind us of the circumstances that led up to the event and finally the conclusion of same.

Another documentary that Burns produced was on baseball. This is truly a winner with live footage of some of the games' greats. If Ken Burns is connected with a project, consider that project as golden. It is a must to have.

But this documentary reads like a novel and will be very meaningful in shaping your opinions.

StudentReviewed in the United States on May 27, 2016
5.0 out of 5 stars
Like the World at War series for the Second World ...
Verified purchase
The opening strains of The Civil War, Ashokan Farewell, are haunting, even over twenty-five years later. The Civil War was the most destructive war in American history. Burns does a yeoman's job of presenting the causes leading up to the war, the war itself, and its lasting aftermath. It's long, but it needs to be. There is no fat, no excess, really. It's just long because there is so much material to cover. Like the World at War series for the Second World War, this is the definitive work on the Civil War. One final note: not one recreation of battle scenes is used in the series. No characters speaking for the players, nobody dressed up in uniforms acting out battles. It's just spoken words, combined with brilliant photography. This is one that I rewatch from time to time, when I have a long stretch of down time. Unlike in 1990, you can actually pause this, or even rewind to catch things you missed the first time.
23 people found this helpful

LloydReviewed in the United States on April 27, 2016
5.0 out of 5 stars
A Great Place to Start
Verified purchase
This is a magnificent work of sensitivity (sometimes excessive), passion and a deep reverence for what was the central event in all of American History. No, it is not a serious work of scholarly history as it does adhere to some of the "sacred cows" related to the Rebellion such as Grant only being victorious because of his superior numbers, Pickett's charge being a "mistake", the Wilderness being a Union "defeat" and several others. This is excusable because the intent here was without question to be non-controversial. The primary elements of the cause of the War being slavery was accurately represented as was the widely varying reasons why the men in ranks actually fought.

The method of presenting the material remains haunting to this day including slow zooms into and out of period pictures combined with the real words of the people of the time spoken by the voices of people we known today. Especially enjoyable and impactful is the period music which truly drives the story telling...and this is first rate story telling.

If one is not familiar with the conflict or wishes a good introduction, this is it. Follow that up by any of the books by Bruce Catton or James Macpherson.
21 people found this helpful

Bradley NelsonReviewed in the United States on January 10, 2015
5.0 out of 5 stars
Still the gold standard documentary
Verified purchase
This is by far the best documentary series on the Civil War and also the best of Ken Burns. It is now 25 years old and still highly relevant. By 2015 standards, this could be a pretty boring documentary (in fact, my high school students find it to be just that), but Ken Burns is all about emotion. He draws upon photographs and stories and music to bring out the real experience of the war.

There are a few historical inaccuracies or other quibbles that historians have had with this series over the years. Shelby Foote is entertaining and fascinating, but not always right. Nevertheless, this series has done much to push the study of the Civil War. Those who watch it should follow it up with reading James McPherson's Battle Cry of Freedom to get an even better grasp of this pivotal event.

This commemorative edition comes with some bonus footage, which is interesting, but not worth buying if you already have the "regular" edition.
29 people found this helpful

JimPlunderReviewed in the United States on February 9, 2021
5.0 out of 5 stars
A masterful, if a little dated, documentary
Verified purchase
This documentary is a masterclass on how to weave intricate storytelling of a historical narrative into an enjoyable viewing experience that educates and entertains in equal measure. While over 30 years old, the documentary sets the standard for all other Civil War documentaries I watch.

Admittedly, having watched it for the first time in years, I feel that aspects of the documentary reflect the 30 year-old mentality when it was made. It borders on romanticizing the Confederacy, including horrid figures like Nathan Bedford Forrest, whose military genius is fawned over while his racism and white supremacy is glossed over. In today's society while we are reflecting on the mentality of idolizing a failed rebellion, the documentary still treats the Confederacy as some people we had a disagreement with for a few years.

Despite the dated mentality, the documentary still provides one of the most comprehensive tellings of the stories of the Civil War that I have seen. If you have not had the pleasure of watching it, you should definitely put it on your watchlist, history buff or not.
2 people found this helpful

RudyReviewed in the United States on February 27, 2015
5.0 out of 5 stars
Thought Provoking, Very Well Made and Historically Accurate
Verified purchase
This series is about 10 episodes long, but if you are a Civil War buff or historian, this is a "must have" historical document. It is punctuated with short
comments made by the great Civil War historian, the late Shelby Foote. The comments are often made from a southern perspective and that is something that is not very often done. He has penned his own Civil War history which took the best part of two decades to complete and is available nearly everywhere books are sold. This presentation brings the whole aspect alive, and you can see that people then varied very little from people now, the exceptions being they were much better spoken and a lot more formal than we are now. We can really feel the passion of people like Mary Chestnut, who was a proper southern lady and a die-hard, Yankee hating Confederate, who pledged to keep a daily journal all the way from beginning to the end of the conflict. It shows the great cultural divide between North and South, with slavery being but one of the very important issues which led to the conflagration between the states. This series is worth your time and attention as it completely explains the "how" and "why" this whole event has occurred. It also demonstrates the horror and utter uselessness of war as a solution to our problems. Unfortunately, it takes both sides of the argument to come to that conclusion, which is very often not the case. See and enjoy, see and be saddened, but above all, see the series.
12 people found this helpful

Jonell WendelReviewed in the United States on May 17, 2021
4.0 out of 5 stars
Ken Burns does it again!
Verified purchase
History is essential for our nation and society, and though it may not always be pleasant, it is important to know what happened in the past to prevent such things from happening in the future. No history lesson could be more important to learn than the reasons and results of the civil war. Ken Burns always captures and expresses both sides of the history and makes sure to have the actual facts.
2 people found this helpful
See all reviews
Back to top
Get to Know Us
Make Money with Us
Amazon Payment Products
Let Us Help You
EnglishChoose a language for shopping. United StatesChoose a country/region for shopping.
© 1996-2021, Amazon.com, Inc. or its affiliates