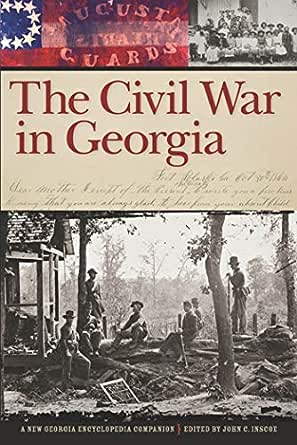 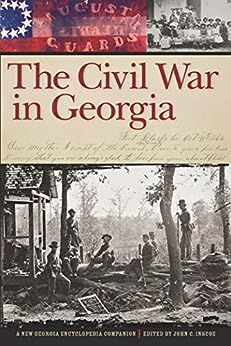 The Civil War in Georgia uses selected articles drawn from the New Georgia Encyclopedia to cover the Georgia Civil War experience and provide the latest scholarship discussing how the Civil War affected individual states. . . .A fine guide, this is a pick for any Civil War or Southern history holding.

That the text is so seamless is a tribute to the strong hand of project editor John C. Inscoe, Professor of History at the University of Georgia and onetime editor of the Georgia Historical Quarterly. . . . Those looking for a sophisticated, concise overview of Georgia’s role in the American Civil War. . .would do well to begin here.

An excellent book for anyone interested in the home front during the war.

John C. Inscoe has skillfully edited and arranged seventy-three topics into three sections: ‘Prelude to War,’ ‘The War Years,’ and ‘The War’s Legacy.’ The result is a valuable resource that provides concise information on major social, political, and military events from the antebellum era through Reconstruction in the ‘Empire State of the South.’

JOHN C. INSCOE is a professor of history emeritus at the University of Georgia and the founding editor of the New Georgia Encyclopedia. He is coauthor of The Heart of Confederate Appalachia.

4.0 out of 5 stars
4 out of 5
6 customer ratings
How does Amazon calculate star ratings?
Amazon calculates a product’s star ratings based on a machine learned model instead of a raw data average. The model takes into account factors including the age of a rating, whether the ratings are from verified purchasers, and factors that establish reviewer trustworthiness.
Top Reviews

Squidly
5.0 out of 5 stars I like to read.
Reviewed in the United States on July 17, 2019
Verified Purchase
Useing this product to READ!
Read more
Helpful
Comment Report abuse

MJ
4.0 out of 5 stars A well rounded, researched window into Georgia's wartime experience
Reviewed in the United States on December 12, 2013
Verified Purchase
This book is extremely well researched and gives the reader a fuller, deeper, and more expansive view of the War and it effects on Georgia. One of the best well rounded full experience reads on the subject. From war front to home front its a wonderful window into the past.
Read more
One person found this helpful
Helpful
Comment Report abuse

thomas
3.0 out of 5 stars Not exactly
Reviewed in the United States on July 28, 2017
Verified Purchase
It was informative but not everything the description said.
Read more
Helpful
Comment Report abuse

A. A. Nofi
4.0 out of 5 stars Georgia and the Civil War, Politics, Operations, Life
Reviewed in the United States on October 25, 2012
An excerpt from the review on StrategyPage.Com:

"Prof. Inscoe (Georgia), author of Mountain Masters: Slavery and the Sectional Crisis in Western North Carolina and Race, War, and Remembrance in the Appalachian South, divides the book into three broad sections, "Prelude to War", "The War Years", and "The War's Legacy". Each section is further divided into several sub-sections; "The War Years", for example, includes "Military Actions," "Military Support," and "The Home Front". These subsections are filled with short essays or side-bars on a variety of subjects written by various specialists. The result is a total of over 70 discussions or profiles on subjects such as "Georgia in 1860", "Andrews Raid", "Battle of Resaca", "Sherman's March to the Sea", "Confederate Veterans' Organizations", "Unionists", "Slave Narratives", "Cemeteries", "Women", and so forth. Although occasionally some essays have a "Lost Cause" resonance, on the whole they are even-handed, and in many cases even ground breaking, such as the suggestion that operations by Confederate irregulars in the state may have caused more harm than Sherman's alleged depredations. "

Most of the significant battles that occurred in Georgia get a chapter; however, disappointingly, very few maps are provided to clarify the maneuvers. Supporting institutions such as hospitals, manufacturing facilities, railroads, newspapers, and prisons primarily located in Georgia’s main cities are recognized. In addition, the situation for unionists, deserters, dissenters, women, and slaves are described.

As this collection makes evident, control of the memories of the Civil War has always been very important to Southerners. Various cities, sites, organizations, activities, books, films, etc have sought to favorably depict the Civil War dating from its conclusion to the present day. In particular, the so-called “lost cause” theme is often advanced. According to this idea, the Confederacy was a gallant cause waged by honorable men to fend off the depredations of unscrupulous Yankees. Slavery, according to them, was a benign part of Southern life that Yankee invaders destroyed. Some of the articles are critical of this idea, but others are accepting.

In many ways the book and the online site are exasperating in their neutrality and passivity to the realities of the South, the Civil War, and slavery. One article in the first section claims that the Civil War was “very much a political war,” that occurred due to political failure. What is not said, is that “fire-eating” Southern social and economic elites drove the political process. America has never figured how to give average citizens a meaningful voice in the political process. An article on Reconstruction scarcely mentions the incredible violence perpetrated on blacks and sympathizers, which continued through several decades of Jim Crow. One author amazingly suggests that blacks and whites hammered out an agreement about freedom after the War.

The book is no more than a very minimalist introduction to the Civil War. Some of the places and organizations that remember the Civil War are not found in traditional histories, so may be useful. To learn about the Civil War and its aftermath such books such as David Potter’s The Impending Crisis, James McPherson’s Battle Cry of Freedom, and Eric Foner’s Reconstruction must be consulted.
Read more
3 people found this helpful
Helpful
Comment Report abuse
See all reviews from the United States