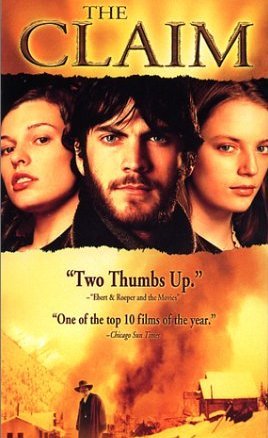 (180)
6.32 h 1 min2001R
This epic story of love, passion and redemption is set against the winter landscape of the Sierra Nevada Mountains and mining of gold in the early days of California.

EinsatzReviewed in the United States on March 11, 2011
3.0 out of 5 stars
Kingdom Come
Verified purchase
Snow. 1869: a bustling town in the Sierra Nevada Mountains.
Muted tones, frenetic editing, the juxtaposition of a stark hotel room then a bar glitzy with candle light, a singer (Milla Jovovich) belts out a tune, a man is whipped outside; who or what are we expected to focus on, the camera doesn't rest anywhere long enough. Nonetheless, this is an oddly engrossing film about one man (Peter Mullan) and his dream/scheme to have the railroad run through his town. He's rich but would like to increase his wealth and power. While he's busy wooing the recently arrived railroad surveyors two women show up in town, ultimately complicating everything. Not really a mystery, not a treatise on greed or the abuse of power, blind ambition, jealousy or the like. Things happen during the time period identified and that's that; take it or leave it.
What makes this an odd film is that while it is a fascinating story, it's also cold and detached and (purposely?) aloof. The scenes are choppy, bouncing around with little regard to structure, highlighting a few people and not much action. Several important clues/flashbacks are included in such a way as to distort time. It's easy to mistake them for what was currently happening; only later realizing their full importance. There's an "a-ha" moment that's rather apathetic. Once everyone reaches the same conclusion, it's met with little excitement. Because, the other odd thing about this film is its complete lack of passion. Everything is matter of fact, whether it's the last fling with a prostitute or the killing of a man or two. It's as if everyone is simply too cold to show any enthusiasm. An example: there's an explosion and a horse runs off in flames, there is no surprise but there should be; it's all too casual.
I will say that it held my attention throughout but once it was over and hindsight had set in I instantly felt no lasting regard for it, preserving the films reserved tone.
Not a film I'd ever want to see again, glad I saw it, but it's not a keeper.

C.T. Reviewed in the United States on June 26, 2021
5.0 out of 5 stars
Fantastic but slow film
Verified purchase
Like a car crash, this is a tragedy and the whole point is not to be surprised with how bad things are going to get but to watch it through it's horrible conclusion. The story is about a railroad engineer, a sick mother plus her daughter, the bordello owner, and the man who ties them all together. Dillon sold his wife and child 20 years ago in exchange for a gold claim that has made him fantastically rich as well as ruler of a small town. However, the town is dying and needs a railroad to secure his legacy. The sins of his past have come home, though, and he desperately wants to atone for the unatoneable. You can't buy redemption, though, and seeing the attempt fail is the heart of the movie.
2 people found this helpful

JenilynReviewed in the United States on March 21, 2015
4.0 out of 5 stars
The cost of it all!
Verified purchase
Impressive movie of the struggles and triumphs along the way to building our nation. Not only the country being developed, but the hardships of the brave pioneers who laid down all they had to achieve the goal is well depicted. Intertwined in the story is a deeper message about the cost of greed. No amount of wealth and success ever replaces lost love.

I enjoyed the movie, thought the acting was very well done, and I highly recommend watching the film.
2 people found this helpful

jasperReviewed in the United States on March 16, 2014
5.0 out of 5 stars
Good as it gets
Verified purchase
Great film set in alaska gold country about a man who trades his claim which he thought was empty and the man traded the claim for a woman and child. Dont want to ruin it for you but you will like it. Plenty of western thiem and a sad end! Buy it it's worth it . It's a sleeper never heard of it until I saw it on HBO. And had to add it to my dvd collection!
2 people found this helpful

HopeJoyReviewed in the United States on August 12, 2020
5.0 out of 5 stars
Based on Thomas Hardy's The Mayor of Casterbridge
Verified purchase
Movie stayed on track and true to Hardy's novel I liked it

Lisa SammetReviewed in the United States on November 13, 2012
4.0 out of 5 stars
Loosely based on Thomas Hardy's THE MAYOR OF CASTERBRIDGE
Verified purchase
This movie took the basic story from Hardy's THE MAYOR OF CASTERBRIDGE. The main character is looking for gold in the Sierra Nevada Mountains translating the story into western America during the gold rush era.
One person found this helpful

T. BaileyReviewed in the United States on February 3, 2016
4.0 out of 5 stars
Looking for a movie you will Remember?
Verified purchase
Beautiful scenery, different kind of story, it's a sleeper. I'm glad I happened upon this movie and highly recommend it.

Mike EblenReviewed in the United States on September 4, 2013
4.0 out of 5 stars
Very Different
Verified purchase
I found this movie interesting. The subject matter is very dark just like the human mind can be sometimes. It causes you to think about the consequences of your decisions.
One person found this helpful
See all reviews
Back to top
Get to Know Us
Make Money with Us
Amazon Payment Products
Let Us Help You
EnglishChoose a language for shopping. United StatesChoose a country/region for shopping.
© 1996-2022, Amazon.com, Inc. or its affiliates