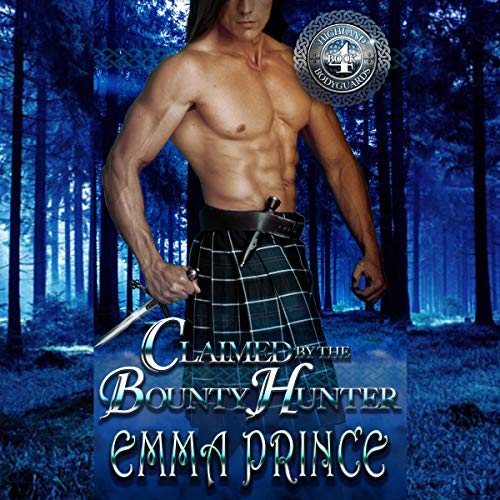 A gruesome siege destroys Kirk MacLeod’s faith in the Scottish fight for independence. Robert the Bruce promises to release Kirk from his service if he completes one final assignment: infiltrate the deadly bounty hunter league that has thwarted the Scots’ cause for years. Kirk plays the part of a cold-blooded mercenary almost too well. But when the league orders him to kidnap a beautiful Englishwoman, he must choose between following his mission, and following his heart.

Lillian Fitzhugh’s late husband leaves her with a powerful secret - one that has men willing to capture and kill for it. When she’s taken by Kirk, a ruthless Highland bounty hunter set to deliver her to the men who murdered her husband, she fears all is lost. But she senses that beneath her captor’s hardened exterior lies the heart of an honorable man. To gain her freedom, she must unravel the truth of Kirk’s identity. In doing so, she ensnares them both in a dangerous web of desire and secrets that may cost them both their lives.

This full-length Scottish historical romance is part of the Highland Bodyguards Series, but also can be enjoyed as a standalone novel. Pick up your copy today!

4.6 out of 5 stars
4.6 out of 5
143 global ratings
How are ratings calculated?
To calculate the overall star rating and percentage breakdown by star, we don’t use a simple average. Instead, our system considers things like how recent a review is and if the reviewer bought the item on Amazon. It also analyzes reviews to verify trustworthiness.
Top reviews

NavyWave62
TOP 1000 REVIEWER
5.0 out of 5 stars ONE OF THE BEST BY THIS AUTHOR!
Reviewed in the United States on April 10, 2017
Verified Purchase
i have read the whole series, and other books by this author and this had it all for me. The suspense was so well written, that I felt I was part of the action. I am not going to do spoiler's, but it has to do with our h and not knowing if she was going to be saved. This happened more than once, and each one was so different, never felt like a cookie cutter.

The romance builds slowly that when it hits and was heart felt. There is one complete lovemaking scene and very mildly described, but you could feel the passion and love. I felt a connection to this couple and they both were strong and brought something different to the relationship.

I enjoyed some character's from the previous stories making an appearance., Others may disagree, but this could be a stand alone. I always enjoy reading series, and catching up with character's from previous books, but the way the author unravels her stories, you won't be lost.

We get HEA, romance, mild lovemaking, a great epilogue and no cliffhanger for our couple. I enjoyed the author explaining the history at the end of the book of Robert the Bruce and his cause. (ljb)
Read more
4 people found this helpful
Helpful
Report abuse

Hot Rod
VINE VOICE
5.0 out of 5 stars Good Guys and Bad: Bodyguard Corps vs. Bounty Hunters
Reviewed in the United States on August 23, 2017
Verified Purchase
If Emma Prince writes the book I know I will enjoy reading it! Kirk MacLeod is a very special warrior and right hand man to the brother of King Robert the Bruce. Edward Bruce was given the assignment of going to Ireland and bringing the Irish resistance to their knees. Laying siege to Carrickfergus Castle was a major turning point for Kirk because of the tactics used in that siege -- starving out those inside, leaving them without water. The result of having the people suffer this way was death and cannibalism. Those affected included Irish soldiers but also Scots who were captured and taken into the castle. A very disillusioned Kirk MacLeod returned to the hiding place of Robert the Bruce. Robert called Kirk before him, learns of Kirk's disillusionment and even insubordination but a patient and understanding King asks that he join the recently formed Bodyguard Corps and he offers Kirk a special assignment: He is to infiltrate a group that has caused a great deal of harm -- the Order of the Shadow. This group is a number of well trained bounty hunters whose job is to prey upon people who are valuable to the Scottish cause and who need Robert the Bruce's protection. The English single them out and pay the bounty hunters to eliminate them. The Order sets out to harm people who can not protect themselves. Kirk reluctantly accepts the assignment. The incentive for Kirk is that once he successfully carries out this mission, Robert will set him free from such obligations Colin MacKay becomes Kirk's contact person.
in Berwick, Northern England a desperate scene unfurls. Lillian Fitzhugh, while shopping becomes nervous feeling that she is being watched. What she does not know immediately is that a bounty hunger is following her and seeks to kidnap her to gather information he believes she has. Will Sinclair is a member of the Bodyguard Corps and has been assigned the task of protector of Lillian Fitzhugh, widow of Richard her husband. Will is aware of the bounty hunter's pursuit and grabs Lillian, pulling her into a house for her own protection. He explains who he is and why he is helping but also attempts to tell Lillian why the bounty hunter is after her -- information about Berwick Castle. -- information her husband may have shared about any castle weaknesses.
Although Lillian is convinced she has not special information that the English need and that her husband confided in her, she later realizes she is wrong. Will and Logan MacKenzie, both working from within the order, identify the leader of the Order of the Shadow and find out the information the King may need to succeed in bringing Berwick Castle to its knees. Does the King attempt another assault on Berwick Castle? If so, it is successful? Is there a concluding love story here as a result of Bodyguard Corps members' efforts to protect Lillian? What is done about the head of the Order of the Shadow? I could answer all of those questions in this review but you the reader might miss out on a wonderful story!
.
Read more
One person found this helpful
Helpful
Report abuse

Laurel
5.0 out of 5 stars Another great Highland Bodyguards Adventure!
Reviewed in the United States on December 6, 2017
Verified Purchase
Each Highland Bodyguards novel draws me in right from the start and holds me in its grip. Claimed by the Bounty Hunter is filled with lots of action, suspense and passion. Kirk is a wonderfully flawed hero who gets right under your skin. His disillusion with the Bruce’s cause sends him in a direction he never anticipated, but one that is fraught with danger. I couldn’t imagine how things would work out and the story had me on the edge of my seat. Such and entertaining and compelling tale. Can’t wait for the next one!
Read more
One person found this helpful
Helpful
Report abuse

LDL
5.0 out of 5 stars Awesome!
Reviewed in the United States on April 3, 2017
Verified Purchase
I have the entire series, so far, and I truly enjoyed each story. I love the Scottish history and the people who fought and lived and died for Scotland's freedom. I enjoy the love story in each book. And I love Emma Prince for her beautiful stories that she shares with us.
Read more
3 people found this helpful
Helpful
Report abuse

marie staton
5.0 out of 5 stars Lovely story
Reviewed in the United States on July 19, 2017
Verified Purchase
I am amazed every time I read one of Emma's books. Such a creative story line. I also like books with a little Robert the Bruce. Plus this book continues with characters from her other books. Characters Lillian and Kirk are great. Kirk the troubled war harden warrior that infiltrates the Order and Lillian his captive. Won't give anything away, but It's definitely a fine book.
Read more
One person found this helpful
Helpful
Report abuse

Sarah R. Matthews
5.0 out of 5 stars Another Exciting Tale...
Reviewed in the United States on April 5, 2017
Verified Purchase
If you love this series like I do, you won't be disappointed. The author once again creates characters of depth that you just love. I love the romance, but also am very interested in Robert the Bruce and appreciate the history woven into the tale. Political intrigue and romance in Medieval Scotland and England, what more do you need? Must read!!
Read more
3 people found this helpful
Helpful
Report abuse

traveller in time
5.0 out of 5 stars excellent
Reviewed in the United States on June 29, 2017
Verified Purchase
I have very much enjoyed ever single book I have read by Emma Prince. She is one of my very favorite authors. I read about a book a week and I have been stuck in this time period for years. And I love books about Scotland the best. I espically like the historical notes at the end. She really does her research so you are getting a history lesson the fun way. Anyway this book was amazing. I loved everything about it . Thank you Emma for taking me back in time. I love your stories. Please keep them coming.
Read more
One person found this helpful
Helpful
Report abuse

scarlett #3
4.0 out of 5 stars Slow but steady
Reviewed in the United States on November 27, 2017
Verified Purchase
The story began very slowly. I know some background is always good, but you really don’t get into the real story until Chapter 4. Lillian was likeable and very intelligent. She has a gift. Kirk has PTSD and realizes that he needs a change. When Lillian & Kirk meet, they slowly form a strong bond. This helps them to trust each and find love.
Read more
Helpful
Report abuse
See all reviews

Mrs. Joyce Beckett
5.0 out of 5 stars 👍
Reviewed in the United Kingdom on April 6, 2017
Verified Purchase
Loved this book, it's as good as the rest in the series.
Read more
Report abuse

Laureen Butler
5.0 out of 5 stars Good Series
Reviewed in Canada on October 29, 2018
Verified Purchase
Good Series
Read more
Report abuse
See all reviews
Back to top
Get to Know Us
Make Money with Us
Amazon Payment Products
Let Us Help You
EnglishChoose a language for shopping. United StatesChoose a country/region for shopping.
© 1996-2022, Amazon.com, Inc. or its affiliates