You've subscribed to ClanDestine (1994-1995)! We will preorder your items within 24 hours of when they become available. When new books are released, we'll charge your default payment method for the lowest price available during the pre-order period.
Update your device or payment method, cancel individual pre-orders or your subscription at
Your Memberships & Subscriptions
There was an error. We were unable to process your subscription due to an error. Please refresh and try again. 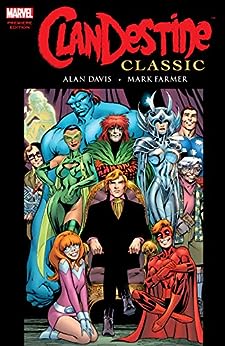 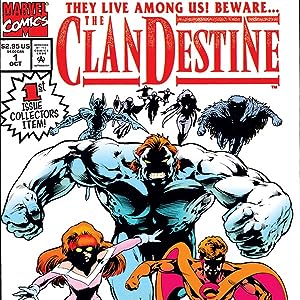 4.9 out of 5 stars
4.9 out of 5
9 global ratings
How are ratings calculated?
To calculate the overall star rating and percentage breakdown by star, we don’t use a simple average. Instead, our system considers things like how recent a review is and if the reviewer bought the item on Amazon. It also analyzes reviews to verify trustworthiness.
Top reviews

Sean Curley
5.0 out of 5 stars An overlooked gem from a chaotic period in comics' history.
Reviewed in the United States on April 4, 2008
Verified Purchase
Alan Davis is a longstanding artist (and writer) in the comic book industry, having gotten his start with Marvel UK three decades ago. He is probably best known for his collaborations with Chris Claremont on the original "Excalibur", first as artist, and later returning for a run as the writer as well. "Excalibur" was a light-hearted take on the superhero genre, and this Davis creation, "Clandestine", follows in these tracks. It is actually quite interesting to look at this early 90s creation, because it must be seen as one of the early attempts to create a non-traditional superhero dynamic; though we see the whole Clan in costume and posed on the covers, all but two of the members (the exceptions being the idealistic children) are not superheroes, and, to varying degrees, have no desire to be superheroes, something they see as juvenile. This is not to say that, in the mode of modern superhero deconstruction, the book is cynical and/or dark; quite contrarily, this is a light and humourous series, though serious when it needs to be.

The story begins with two preteen superheroes, Crimson Crusader and the Imp (Rory and Pandora Destine) doing their best to thwart fairly petty crime (museum robbers and the like) in their home of Ravenscroft, England. Rory and Pandora believe they are mutants, and, having gotten superpowers, believe that the only thing to do with them is fight crime. Rory, in particular, is very much copying the stereotypical comic book hero, outlining the tropes of the genre, from banter with opponents (that generally isn't all that funny or clever) to his very stilted moralizing speeches. What the twins don't know is that their father and grandmother, Walter and Flo, are not actually what they seem; they're actually their siblings. Rory and Pandora belong to a family of magical beings descended from a 900-year-old immortal and a djinn (genie). Siblings include Samantha, Kay Cera, Newton, Dominic, and Gracie. The opening story arc finds the whole family under attack by mysterious villains, forcing them into action and drawing absent patriach Adam Destine home for the fight (having spent a decade or so travelling through space in a 60s hippie van; a priceless visual). Further stories (and there were only eight initial issues by Davis) tie the family more closely into the Marvel Universe, with guest appearances by such mainstays as Spider-Man (who gets the most substantial role), Doctor Strange, the Invaders (Captain America, Namor the Sub-mariner, the Human Torch), and the Punisher.

Davis left the series with #8, leaving another creative team to do a handful of subpar issues that are not collected here; when Davis returned to the property with his two-issue "X-Men and Clandestine" miniseries (which rounds out the collection), he retconned said issues into a dream, so far did they depart from his vision. "Clandestine" was caught up in the collapse of Marvel UK, itself part of the speculator bust of the 90s. Tied into Marvel's biggest franchise, Davis gets a chance to tell what was then potentially the characters' last hurrah. At the end, Adam Destine remarks about the future of his family:

"My family and I are no longer a part of the world you inhabit, Logan. We linger like shadowy relics of a forgotten era...it may be that we have had our time."

Wolverine can only say "I hope he's wrong.", and after reading this hardcover I think you'll agree; and, luckily, Wolverine was proven correct, although it took more than a decade, when the Clandestine returned in 2008 for another five-issue miniseries. Hopefully they continue to not fade away.
Read more
6 people found this helpful
Helpful
Report abuse

Kid KyotoTop Contributor: DC Comics
4.0 out of 5 stars Interesting start that leaves you wanting more
Reviewed in the United States on May 15, 2008
Verified Purchase
This book introduces the reader to a whole new pantheon of superheroes with their own long history, divergent presents and mysterious threats.

The art is fantastic, the ideas are bold and Davis shows how important faces are in story-telling. The body language and expressions in this book are fantastic, something every aspiring artist should study.

Unfortunately new characters and new ideas are thrown out but given little time or space to develop. Cross-overs with other Marvel characters slow things down further as the stars of the book have to step aside to give us several pages of the X-men clowning around or MODOK hatching an evil scheme.

Hopefully the new series will give the Clan more space to fulfil its potential.
Read more
Helpful
Report abuse

James R. Garcia
5.0 out of 5 stars A Rare Find Worth Checking Out
Reviewed in the United States on April 4, 2016
Verified Purchase
How can you beat Alan Davis. His art always delivers. I really liked reading characters I didn't know. Alan's writing made the characters real and likable. This is a real gem. The X-Men in the later issues a bonus.
Read more
Helpful
Report abuse

Fred Bronaugh IIITop Contributor: DC Comics
5.0 out of 5 stars Alan Davis' MaSTER PIECE
Reviewed in the United States on November 12, 2015
Verified Purchase
Greatest work by Alan. It's forgotten about it but it's often forgotten. His art is amazing
Read more
Helpful
Report abuse

Randall C.
5.0 out of 5 stars A great read
Reviewed in the United States on May 5, 2008
This hardcover collection of Alan Davis' tale of a long established, but hidden, family of super powered beings is an excellent read. While this volume collects all the stories of the Clan Destine published in the late 1990's, you can tell Davis had much more to tell. While laying out the origin of the family as it's discovered by it's youngest 2 members along with thrilling adventures, you can see that there were plenty of ideas and stories waiting to be told when the series was cut short. That doesn't mean that this volume is incomplete as Davis packs in a large story in a short time and stands very much on it's own. The writing is very good superhero fare and the artwork by Davis is fantastic, with good storytelling flow and action. The only shortcoming of ths package is that due to page size and hardcover binding some art is lost at the center. This is very noticable the few times a double page spread is employed, but it's just the nature of hardbound comics.
Read more
One person found this helpful
Helpful
Report abuse
See all reviews
Back to top
Get to Know Us
Make Money with Us
Amazon Payment Products
Let Us Help You
EnglishChoose a language for shopping. United StatesChoose a country/region for shopping.
© 1996-2021, Amazon.com, Inc. or its affiliates