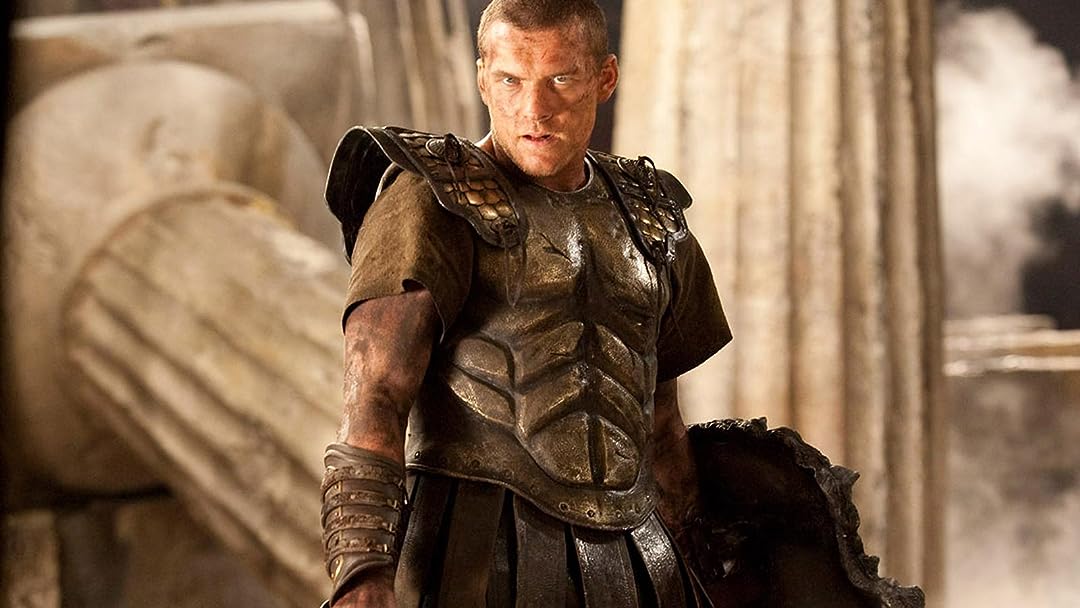 (5,328)
1 h 46 min2010X-RayPG-13
Born of a god but raised as a man, Perseus volunteers to lead a daring band of warriors to defeat Hades before he can seize power from Zeus and unleash hell on earth.

joel wingReviewed in the United States on October 5, 2020
4.0 out of 5 stars
Great fantasy adventure with plenty of action and fun to be had
Verified purchase
Clash of the Titans was a remake of the 1981 film and drew inspiration from the Greek mythology surrounding Perseus (Sam Worthington). His mother was a mortal but his father was Zeus (Liam Neeson) the king of the gods. Perseus has to save Argos from the wrath of the gods as they promised to destroy it with the Kraken. The story is about how he became an unwilling hero.

The reason Perseus was a reluctant hero was because he was raised by a fisherman who had a deep seated cynicism towards the gods. He was always told humans should thank the gods for creating them, but he would say he was tired of thanking them for getting scraps and struggling through life. Later his family would be wiped out by the gods. This was why Perseus rejected his father when he found out it was

The movie is a great adventure with a lot of action and fun. The monsters that Perseus face are well done and many of them are imposing. “Release the Kraken” has become an iconic phrase from the film. There is also a small nod to the original Clash when Perseus finds the mechanical bird that was featured in the movie.

Amy A. ChristensenReviewed in the United States on April 19, 2020
1.0 out of 5 stars
A fisherman messiah? No thanks.
Verified purchase
I really wanted to try to like this movie but I cannot even finish it. The best thing about this movie were the scorpions when they became pack animals. That’s it. Because even the fight scene with them was rather anticlimactic and bland. As pack animals they were fairly believable, except when one stumbled. Clearly that was done just so that the animator could draw attention to how clever he could be.

This was clearly made by a devote Christian preaching manifest destiny and the sovereignty of the human race and its right to hold dominion over all other living creatures, and even over nature itself. That is what the Greek Gods represented, the unpredictable forces of nature. The fisherman Perseus is the Messiah come to conquer nature. And the message is clear that the ancient ways of nature must be utterly destroyed so man can take his right place as owner of all.

Hades takes the role of Satan in this story, even going so far as to depict him in a Christian depiction as a God banished to the realm of death. Isn’t that what Christianity is supposed to save humans from? For if a human is “saved” they get to spend eternity in heaven as a slight of hand exchange for death.

The Ancient Greeks didn’t seek death but they sure weren’t so terrified by it like Christians. Death was accepted as an inevitability. Fighting death as an enemy has no place in Greek Mythology.

They should have used a modern setting. Because showing Ancient Greeks battling supernatural powers without some kind of modern technology made absolutely no sense. How can you battle something which waves it’s hand and causes instantaneous death?

Not to mention characters flipping back and forth between “Pray to the Gods to save you!” And “I will smile when I can spit on these same Gods.” It doesn’t make a character interesting, it makes them unbelievable.

Finally, the fisherman Messiah had no stakes. Why would he waste time fighting a Kraken? Why not fight Hades or his Father directly? Because like the woman who wanted to rewrite Harry Potter as a Christian prayer, this movie wanted to pirate monsters to ram Jesus down our throats.

Mayor SalReviewed in the United States on December 29, 2020
4.0 out of 5 stars
Not great but worth every minute.
Verified purchase
This film takes a 1981 version and reassures us its OK never to watch that awful Harry Hamlin version ever again. Sam Worthington in one of his earliest screen roles is a formidable Perseus. He demonstrates his chops as an action hero as well as a dramatic lead. Other characters are well casted and not too boorish so as to make this a nice action flick to watch on a lazy afternoon. The real scene stealer, however, is Gemma Atherton. Her beauty is mezmerzing and her performance is superb and memorable for the subtleness she brings to the role of IO. Ms Atherton would go on to make a name for herself in Hollywood, fortunately, because she can act with every fiber of her body. I am about to rent all of her films and binge watch. Enjoy the ride.
2 people found this helpful

MorePower Tool manReviewed in the United States on February 27, 2020
5.0 out of 5 stars
Prompt delivery of secure package
Verified purchase
Excellent 3d. Genius camera placement many scenes throughout
For me 3d viewing is much better when I am not tired.
Inconvenient fact that I'd rather watch 3d movie after dinner.
Perceiving 3d image in motion requires high level of adaptability of the moment.
Fell asleep watching this. Woke up after FULL rest and hit play.
( Excited expletives and WOW ! ) 3d rendering was 5 times better. Try it, see if I'm right.
Love this story of Perseus. Always wanted the movie since 5th grade history class 48 yrs ago.
3 people found this helpful

Bryon HutchesonReviewed in the United States on March 1, 2021
3.0 out of 5 stars
It was an OK remake
Verified purchase
I thought the original was a much better version because it had more character development. The producers of the 2010 version spent more time on the special effects than the actual story, and the direction of the story they went with was just bad. the gods are mad because humanity isn't praying enough... really? Big difference from the original version.
2 people found this helpful

Jay OhnieBReviewed in the United States on July 5, 2018
2.0 out of 5 stars
Very disappointing.
Verified purchase
I can’t believe they made two of these! I don’t know where they got the ‘myths’ they were writing about but it wasn’t Ancient Greece.
Greek mythology is very exciting, action-packed, and suspenseful all on its own. I have no idea why they chose to monkey with it.
Perhaps they planned a third one set in Troy but Troy was in Kansas and ruled by orcs.
12 people found this helpful

SwampyReviewed in the United States on February 10, 2014
5.0 out of 5 stars
A big fan of the original
Verified purchase
This review is based purely on the fact that this is a remake of the original movie, which I love! This movie is not an accurate representation of the original tale. I'm okay with that. I feel that in this day and age it is very rare for a movie to be exactly like its book counterpart, or in this case myth. With that said, here are some things I did not particularly like about this remake. First off I don't like how the concept of life on Earth being a game to the Gods was downplayed. It seemed like they were a bit more human themselves, and not so much "arrogant gods" who don't really think about consequences. They have the big "game board" and even have the pieces for each character, but you never really see them manipulating anyone like a game. Next off is Perseus' hair. A buzz-cut? really? Lastly I did not really appreciate the Bobo cameo, I felt it mocked the original movie more than paying tribute. Those are my biggest complaints, barely complaints really. This movie is GORGEOUS, fun, and full of great fantasy situations. Medusa looked fantastic (although not frightening), and the Kraken was simply amazing. As a fan of anything fantasy, Sci Fi or horror related I highly recommend this well done Remake.
13 people found this helpful

Michele LyonsReviewed in the United States on September 24, 2010
3.0 out of 5 stars
Amazing special effects, but not much else
Verified purchase
Like many others, I was a fan of the earlier version of Clash of the Titans. This modern version is plagued by all the same problems that seem to be a part of today's movie making: the makers let the special effects dominate the movie, and dismiss everything else. I loved this movie for the special effects, and it is worth watching, and even owning, just for that alone. The characters, the monsters, the battle scenes, the gods, etc. were all worth the price of admission. My favorite part is that the winged stallion Pegasus is jet black, and has a herd of pure white winged mares. But I would have liked a little more story. Another of the problems this movie has is its' near complete lack of color. Everything is in muted shades of bronze, brown, black, gray and cream. It totally amazes me that today, with fantastic fabrics in every color of the rainbow easily available, no one in Hollywood seems to think to use them. For all the colors this movie has, it might just as well have been filmed in black and white. Not to mention that many of the scenes, like the confrontation with Medusa, are so very dark that it is hard to make out the action. Directors today seem bogged down by "historical accuracy" and "true to life". But this story is not a history lesson, it is a fable. The original Clash of the Titans remembered that it was a fairy tale, used beautiful fabric and bright colors, had characters in it that looked like they bathed, and had bright backgrounds filled with light that let the audience see what was going on. With the modern version, I felt like I should run it through a computer, and add color and light to it. As it is, the heros are brown, the monsters are brown and the backgrounds are brown.

Moreover, the makers of this movie did nothing to tell even a bare bones story. There is no reason in this movie for Perseus to rescue Andromeda, or to risk his life for the city---he is a stranger to the princess, and the people of the city have not exactly been friendly to him. He is imprisoned, tortured and then forced into taking on the quest. He should have taken off the first chance he got. The idea that he has some vague idea of getting back at the gods is not sufficient.

This movie is worth watching, with fantastic special effects, but I would have loved to see how much better it could have been with bright colors, more light and a better story.
9 people found this helpful
See all reviews
Back to top
Get to Know Us
Make Money with Us
Amazon Payment Products
Let Us Help You
EnglishChoose a language for shopping. United StatesChoose a country/region for shopping.
© 1996-2022, Amazon.com, Inc. or its affiliates