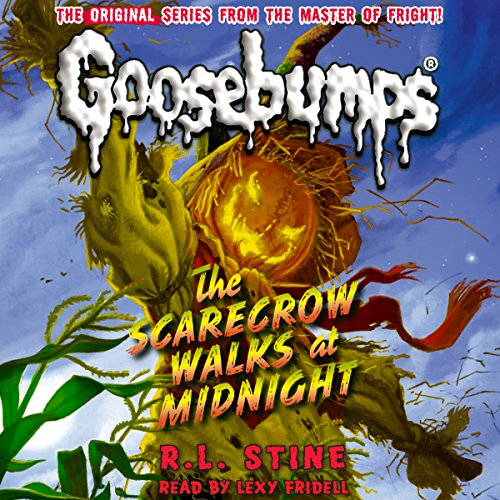 4.7 out of 5 stars
4.7 out of 5
380 global ratings
How are ratings calculated?
To calculate the overall star rating and percentage breakdown by star, we don’t use a simple average. Instead, our system considers things like how recent a review is and if the reviewer bought the item on Amazon. It also analyzes reviews to verify trustworthiness.

Jodie and Mark are spending their summer vacation on their grandparents' farm. It's an annual event viewed with excitement: Hidden fishing holes, a large farm to explore, fresh chocolate pancakes every morning, ghost stories before bed, the perfect hanging lounge chair for a day of nothing but Gameboy! Yeah!

Summer of 1994, however, their normally-loving and attentive grandparents are oddly reserved; they barely speak a word to our heroes, and when they do, it's to be dismissive, yet genuine and caring. Stanley, the farmhand, has a new passion for the occult, including an uncomfortable obsession with rows and rows of scarecrows he's convinced are alive. From there, the confusion over what the junk is going on, and if anyone's in danger, escalates.

The large scale of the mystery brings about some of the pacing issues. There wasn't enough room to wrap up the story, so it peters out all at once in a miraculous, random action. On a lighter note, the sudden ending also contributes a sense of mythology to the book, leaving the reader imagine if things are really over or just beginning. As the twentieth book, however, it still gave the impression that the series wasn't losing steam anytime soon.

[*]I say 'most' because Stanley, the farmhand, toes the line in portraying people with special needs as completely ridiculous. His comic ignorance and "suspicion book" felt out-of-place against the other characters.
Read more
One person found this helpful
Helpful
Report abuse

Donald HuntTop Contributor: Writing
5.0 out of 5 stars Always Watch the Words You Say...
Reviewed in the United States on October 21, 2018
Verified Purchase
I write a lot of reviews and also write pulp fiction (Mystery and Horror).
Therefore, I read in many different genres.
I read, The Scarecrow Walks at Midnight, with my Granddaughter (she loves Goosebumps).
And even though it is not quite a Halloween tale, we made it one ( since we read it in October).
I am looking forward to reading more books in this series, as my Granddaughter has already picked
out a few more.
So, I will be back to do more reviews, after we have read them.
Keep 'em coming.
Read more
Helpful
Report abuse

Brian Childers
5.0 out of 5 stars love Goosebumps!
Reviewed in the United States on September 20, 2016
Verified Purchase
I received mine from Amazon in perfect condition, no rips, or creases on the cover or pages within. The cover has some gorgeous artwork, that helps you visualize while reading.

The paper quality is top notch on the inside as well, and if you're a Goosebumps fan, you KNOW the story is as well. Highly recommended!
Read more

5.0 out of 5 stars love Goosebumps!
By Brian Childers on September 20, 2016
I received mine from Amazon in perfect condition, no rips, or creases on the cover or pages within. The cover has some gorgeous artwork, that helps you visualize while reading.

The paper quality is top notch on the inside as well, and if you're a Goosebumps fan, you KNOW the story is as well. Highly recommended!

Marguerite
5.0 out of 5 stars LOVE
Reviewed in the United States on March 9, 2016
Verified Purchase
My son is 10 and he is fascinated by these books. He really enjoyed this book and can't wait to find another one to read. What a great gift for kids who love that fantasy to get them interested in reading.
Read more
2 people found this helpful
Helpful
Report abuse

Josh E
5.0 out of 5 stars Two thumbs up from a 9 year old boy!
Reviewed in the United States on November 18, 2015
Verified Purchase
My 9 year old son is addicted to Goosebumps books! He has an entire bookshelf dedicated to them. I remember reading them as a kid and I loved them too. According to him, this is one of his favorites.
Read more
5 people found this helpful
Helpful
Report abuse

Jacqueline
5.0 out of 5 stars R.l stone rocks
Reviewed in the United States on September 23, 2018
Verified Purchase
My son lives any thing R.L stine.. the movie and the book came in 2 days, and he loves them both.. I shall be ordering different books ansnmovies as well.
Read more
Helpful
Report abuse
See all reviews

I DO NOT RECOMMEND THIS BOOK
TO PEOPLE WHO ARE EASILY
SCARED!!!! +_+

Kindle Customer
5.0 out of 5 stars yikes!
Reviewed in the United Kingdom on July 14, 2013
Verified Purchase
I read this book as a kid and nearly died of fright!!!! It's so good that I just had to own it as an adult too so I can share the scares with my kids! :)
Read more
2 people found this helpful
Report abuse

Kira
5.0 out of 5 stars Five Stars
Reviewed in the United Kingdom on June 24, 2017
Verified Purchase
21 years old and I love it. Also it came quick
Read more
One person found this helpful
Report abuse

Miss C Klein
5.0 out of 5 stars kids love these stories
Reviewed in the United Kingdom on January 8, 2015
Verified Purchase
As always, kids love these stories, from sons to grandsons, cannot go wrng with the Goosebumps stories.
Read more
One person found this helpful
Report abuse
See all reviews
Back to top
Get to Know Us
Make Money with Us
Amazon Payment Products
Let Us Help You
EnglishChoose a language for shopping. United StatesChoose a country/region for shopping.
© 1996-2021, Amazon.com, Inc. or its affiliates