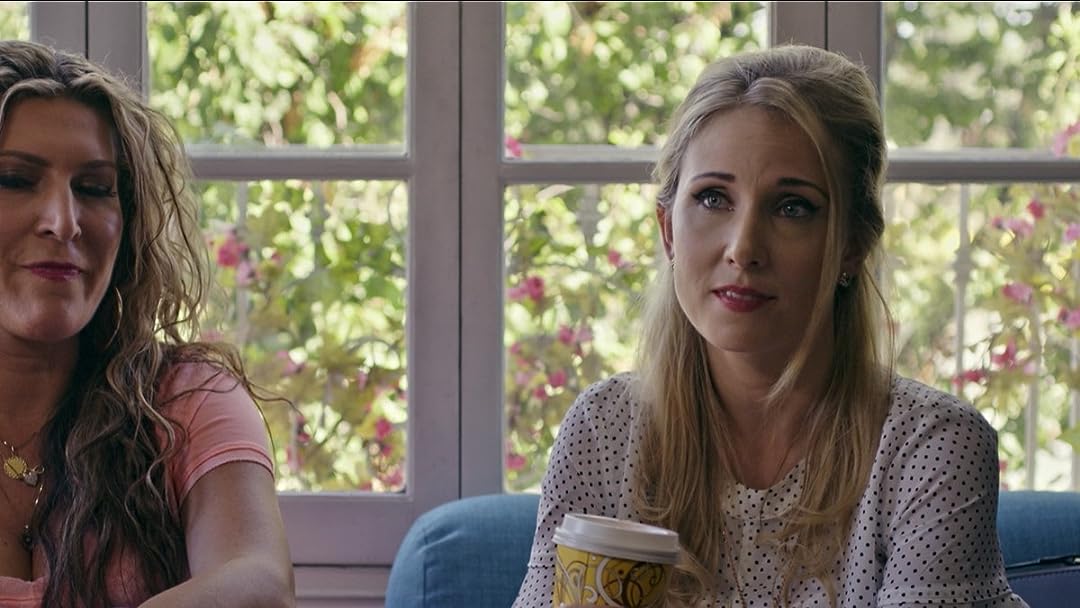 (476)
5.51 h 30 min2019X-Ray16+
On the surface Alice seems like a woman who has it all: a gorgeous apartment, a booming career, a stunning physique, and a handsome boyfriend. The only problem is she's married to someone else. Looking for a way to simplify her life, Alice hires Shelly to clean her house. As Alice begins to confide in Shelly about her illicit affair, their friendship grow and so does Shelly's twisted obsession.

JefferyReviewed in the United States on August 19, 2020
2.0 out of 5 stars
WTF is this
Verified purchase
This movie was free, but I still want my money back!
49 people found this helpful

Red SonyaReviewed in the United States on August 11, 2020
2.0 out of 5 stars
Terrible ending
Verified purchase
Horrible ending. The movie was good, albeit it was so fake and contrived, too. No way would a situation like that between the main characters even be possible in a real world. The cleaning lady was way too creepy to begin with, and there were so many red flags about her that were ignored. But the ending sucked the most. It literally took a great concept and crashed it.
42 people found this helpful

J WReviewed in the United States on August 30, 2020
1.0 out of 5 stars
I wish they had hired a "writing lady" to make a decent movie
Verified purchase
The moral of the movie is: Don't be nice to anyone.

The film delivers this compelling message through over an hour of mind-numbing plot development that aims to spell out every little nuance to you and then about twenty minutes of boring anti-climactic plot "climax" and an unsatisfying ending.

I was really hoping for more crazy, but instead just got some actress who's obviously very extroverted and has a healthy social life in real life trying to pretend to be introverted and awkward while wearing about five layers too many of something you'd buy from Hot Topic to cover up an acne scar.

Can't really think of a single redeeming quality to the movie, so gonna have it to give it a single star.

EdwidgeeReviewed in the United States on September 5, 2020
1.0 out of 5 stars
Lazy writing, even for a B level horror movie
Verified purchase
SPOILER ALERT: The movie tries really hard, but there are too many things that make no sense for it to be enjoyable. Through the flash-backs we get the sense that she grew up in suburbia, but to add to the mystique, the writers changed a suburban starter home to a home waaaaaayyyyyy out in the woods, she gave her mom what in any other movie would be a life ending injury, but the mom survived and decades later and is now her....I won't give more away, just stay away from this one if you don't want to be frustrated by lazy writing.
24 people found this helpful

Caulder UnknownReviewed in the United States on June 9, 2019
4.0 out of 5 stars
Not for everyone...IT'S THAT GOOD!
Verified purchase
I'll tell you right off, one of the things I particularly enjoyed, most people will dislike intensely; the pacing. It is often slow as molasses, deliberate, yes, but it's intentional and it delivers! Sure, it's a 'slow-burn,' but once it gets cooking, the burn may be slow, but it's a continuous one, and, this happens top be, perhaps, one of the best edited horror films I've seen in a long time. To be sure, there's good out-and-out horror, but what makes this film better than most of the crap the masses go crazy for, is how chilling and disturbing the less obvious, quieter moments are in this original, well-crafted story; one I believe, deliberately not spoon-fed. Director, John Knautz, maintains a constant, overall, sense of uneasiness, which, in my opinion, is what the genre is all about., The dialogue (Screenplay by Mr. Knautz and Alexis Kinda) is smart; and, at times, thank god, witty; another invaluable asset to a first rate thriller. Having the "normal" characters speak realistically, emphasizes the tortured and violent ways the more, shall we say, unsavory characters communicate. I have one criticism; something I'm ambivalent to mention. This is not a spoiler. It has to do with the plot. It was a stretch to believe (not intellectually, as it can be explained, but as a plausible story point) how a beautiful and smart, albeit, uncentered and stressed, woman would welcome someone a stranger like Shelly into their lives (on so many levels) so quickly. Itt's fine for a character to feel empathy for someone less fortunate, granted, but it may have made the story more believable if Shelly didn't appear as if she just escaped from a high-level security insane asylum and exchanged her dirty hospital gown for an even less attractive outfit. It's a small quibble when you consider the character of Shelly, played by Rachel Aleg, who doesn't so much act the role as inhabit it. You can't take your eyes off her whenever she's on screen, and every line, or, I should say, every word she utters, is fascinating. Watch her eyes, when and where they focus. It's a mesmerizing performance, though I'm certain some reviews will say Ms Alig can't act her way out of a paper bag. (Oh, really?) I wondered if the if deeply disturbed character is named Shelly and, honestly, looks pretty much as disheveled and disturbed as Shelly DuVall does today, How one of the most uniquely gifted actors to grace modern cinema could disintegrate to such a level; friendless uncared for, and painfully unstable, only to wind up being exploited by the likes of Dr. Phil, is a true Hollywood scandal. I have to say, if the plight of Ms Duvall had anything to do with naming the character Shelly, - shame on you! . But it doesn't mean it's not an accomplished work by any means.
22 people found this helpful

Raymond MickeyReviewed in the United States on August 18, 2020
2.0 out of 5 stars
Fun watch but its just not believable
Verified purchase
The film never explains itself. You have this cleaning lady but understanding the motivation behind what she does is not connecting for me in terms of her backstory. The cleaning lady also has a utility belt of chemicals from knockout stuff to hydrochloric acid but its just never explained how she got this stuff. She also kidnaps and imprisons people in her isolated in the woods house but we don't get any explanation as to why she does that too.

Its visually entertaining and the characters aren't that bad but it doesn't make a whole lot of sense.
14 people found this helpful

Wise WomanReviewed in the United States on February 21, 2021
1.0 out of 5 stars
Complete Waste Of Time; Evinces A Depraved Mind, Regardless Of Human Life
Verified purchase
Dear Reader,
Please read this review to the end. Thank you.

The following is my opinion:

Not a movie (a portion from the cutting room floor strung together?)... No character development... No plot; the "movie" most like an incomplete fleeting thought(s)... Unscripted? No need for a writer to come up with this dialog (what little there is)... Not low-budget, more like no-budget (right down to the Kindergarten origami wall decorations); props appeared to be a mix of leftovers from several garage sales... A complete waste of time.

Spoiler Alert! Movie Summary: A female apartment-based esthetician tries to leave an adulterous relationship with a married man but fails -- repeatedly. She takes pity on and hires/befriends an abused, disfigured, filthy, economically-challenged woman as her cleaning lady. The latter becomes jealous of the former's "Barbie doll" looks and lifestyle which oddly motivates her to (in her addled mind) perfect/purify the esthetician using the following "methods":
1. Go beyond cleaning to include pest removal services [pest = rat(s)]
2. Assist the esthetician in smoking cessation
3. Assist the esthetician in ending the adulterous relationship by forcing her to murder the married man, and...
4. Attempting to kill the now-purified esthetician, apparently before she has an opportunity to soil herself again

Throughout the "movie" are flashbacks showing how the cleaning lady was abused by her mentally ill mother (verbal abuse, physical abuse, forced child prostitution); this abuse culminates with her mother flinging boiling water in her daughter's face resulting in the latter's facial disfigurement. In retaliation, the daughter somehow (not shown or described) manages to incarcerate her mother in an empty tool shed and force her to eat raw rats -- fur, blood, tails, claws, and all -- after a trip through a blender. Included are other gratuitous random scenes of the esthetician visiting her personal trainer at a gym for the apparent purpose of showing off her generous bust and slim physique.

Above all, I feel that this movie evinces a depraved mind, regardless of human life as do so many other more recent and contemporary movies of the thriller, slasher, and/or horror genres. Furthermore, It is not a coherent whole, has no cohesive ending, and is pointless. I wish I had not been too tired to turn it off yet too awake to close my eyes or select a more productive, enjoyable use of my time. I remain thankful that the actual child prostitution and rats being blended alive were not depicted.
8 people found this helpful

Ciara GrubbsReviewed in the United States on August 8, 2020
5.0 out of 5 stars
Original Take on a Familiar Plot
Verified purchase
This film was extremely unsettling from beginning to end, with a good mix of psychological dread + occasional jump scares. It's clear from the beginning that the characters here are complex and there's no clear good/evil dichotomy, which makes things interesting. There's also a decent amount of gore, but I didn't feel it was overdone. I definitely recommend this film to horror fans who prefer REAL life monsters to ghosts and haunted houses.
11 people found this helpful
See all reviews
Back to top
Get to Know Us
Make Money with Us
Amazon Payment Products
Let Us Help You
EnglishChoose a language for shopping. United StatesChoose a country/region for shopping.
© 1996-2021, Amazon.com, Inc. or its affiliates