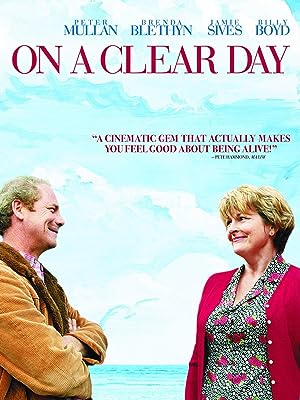 On a Clear Day

(359)
6.91 h 39 min2005PG-13
Frank determines to salvage his self-esteem and tackle his demons by attempting the ultimate test of endurance - swimming the English Channel.

DragonflyfuzzReviewed in the United States on July 7, 2018
5.0 out of 5 stars
Beautiful. Powerful. Everything a film should be.
Verified purchase
I have been wanting this film for a long time - and, it did not fail me.
Beautiful story - it's not just about a man who swims the Channel - it's a story of a family, friends - real issues.
I love films that rely on the strength of the actors, integrity of the message, - no distractions, no special effects to distract us from any real worth of the film.
It is a father/son, wife/husband, friendship, grief - all the things that we experience as human beings - and the film deals with these in a respectful, real way - really extraordinary. I hate that blockbuster mentality - nothing more than commercialism, trying to make a buck crap. This is NOT it.
If you're looking for the cake and icing - you've got it here, along with a full course meal.
Beautiful

C. ReinReviewed in the United States on July 17, 2016
5.0 out of 5 stars
Great feel-good movie for when you really need it
Verified purchase
“On a Clear Day” is one of my favorite “feel good” movies, where if you’re down in the dumps and need a pick me up, it really does the job in my brightening my mood by the end of the movie. It’s a pretty bleak story in the beginning, but, without giving away the ending, it’s one of those happy movies that makes my eyes water a bit in the end, but in a good way.

This is the movie that made Peter Mullan one of my favorite actors. He goes through a wide range of changes in the movies, but can also be very stoic when the story calls for it. It’s a shame he’s not more well-known. Brenda Blethyn is a also pretty great and is probably more well-known as an actress. Billy Boyd from “The Lord of the Rings” has a smaller part, but he’s definitely the comedy relief to me in the movie. He fits his roll well.

It’s one of those movies where if you need to motivate yourself to achieve a goal, it makes you feel like it’s actually possible, even if the end result isn’t what you thought it would really be. There will be set backs and confusion, and maybe even some resentment from other people, but if you put enough effort into what you set out for, you’ll find what you really needed in the end. I like to watch it at least once a year, just because I love the feeling when I reach the end of the movie.
8 people found this helpful

SuzeReviewed in the United States on August 17, 2021
4.0 out of 5 stars
Good. Really good; believable. Friendship/family loyalty put to the test.
Verified purchase
This is a movie to savor, to appreciate fine development of character and plot. Actors are excellent, nuanced, especially Peter Mullen, Brenda Blethyn, Benedict Wong, Sean McGinley. Photography provides beautiful close-ups of characters as well as abundant seascapes and views of Dover and Glasgow.

We're weary of zombies, car chases, gratuitous forensics in slapdash 'action' movies. It's often necessary to go back a few years or so to find films and TV series with characters and plots that engage; to find actors who aren't pumped full of botox and/or made up like flamenco dancers (who don't dance).

On a Clear Day is well worth your while to absorb and enjoy a plausible story delivered by an excellent cast. See it!

K. J. M.Reviewed in the United States on June 27, 2017
5.0 out of 5 stars
Warm, nice characters, captivating story. And it's Scotland!!
Verified purchase
Hmm, I thought I reviewed this already. It's a really nice, captivating story, filmed in Scotland, my homeland in another life (at least that's how I feel when I watch Scottish flicks). Peter Mullan and Brenda Blethyn are a couple of my favorite Scottish actors, and that isn't as limited as it sounds. Ever since being stationed in Scotland quite a few decades ago, I've looked for books and films that could keep the memories alive. The characters in this movie are all warm and likeable, not bad guys really. It made for a really nice evening.
3 people found this helpful

Harold WolfReviewed in the United States on April 29, 2008
5.0 out of 5 stars
INSPIRATIONAL, FUNNY, FAMILY FRIENDLY--AND OUR HOUSE LOVES THE BRITTISH ACCENTS
Verified purchase
A DVD for you if you are aging, have lost a job, dealing with a handicap, struggling with a major problem, enjoy Scotland or England, are a water lover, if you enjoy watching movies with a spouse (or need to), or if you just like a really good comedy/drama/feel-good movie without Hollywood's toppings of sex, blood, and death. It's five stars of pure enjoyment with a heart-hug ending.

We watched with the English subtitles on. Wendy's review stated that her copy had no captioning. It does help with certain areas when the heavier British accent is hard to catch. I didn't have to rely on it much but we watch a lot of British, Irish, Scottish, and BBC movies. If you have a problem with that, make sure your purchase has the captions.

Yes, I agree with everyone, Frank (Peter Mullan)is an outstanding character and superbly casted. But I also felt that his wife, Joan (Brenda Blethyn) also was excellent. Both of them display a drive within that spells inspiration to others in similar situations--that being, reaching an age when something else has to begin to mark life's milestone.

Another point of inspiration is the young little swimmer at the pool. If he's an actor that is not really handicapped then he deserves a major award for the acting. If he's truly handicapped, then he deserves a bigger than major award for displaying his own true inspiration and for the accomplishments of doing the film. To his ability, sorry I don't know his name, I shout "YES!" As he did with each pool length.

You also will fall in love with the antics, and roles of the group of pals that assist Frank in the Channel swim attempt. Each fellow seems to have their own personal "channel" to swim or face. Will each succeed? Did Frank and Joan? I'll not be the spoiler.

"On a Clear Day" will perk up any cloudy day. Something for everyone. The only disappointment I can share having is the fact there is no extras to add to the film's length of pleasing entertainment. I know how to swim that channel--I'll end this review and watch the movie another ti...
4 people found this helpful

cstr8Reviewed in the United States on September 2, 2019
3.0 out of 5 stars
Ho hum
Verified purchase
I saw a preview for this and it looked good, so I read reviews on Amazon. I guess I don't agree with many of the reviewers because I found this movie terribly slow moving. The last ten minutes were really good, but was it worth plodding through the first hour plus? Not so sure. If I knew how boring it was, I would never have purchased this.

C.A. ArthurReviewed in the United States on September 4, 2014
5.0 out of 5 stars
Splendid art film
Verified purchase
This is a lovely, extremely smart art film that delivers on every front: solid acting, splendid photography, outstanding direction, and superb story writing.It's a film about men; produced by women. The movie is for adults, not because it's obscene in any way (it isn't), but because it deals with real people, serious emotions, and the inter-personal struggles that can be seen only through the window of perspective. You won't find this film at the mass-media theaters; it doesn't pretend to compete with, say, Godzilla. It's thoughtful, humorous, and above all, bright. Bravo!
8 people found this helpful

Todd X.Reviewed in the United States on January 22, 2014
5.0 out of 5 stars
On a Clear Day
Verified purchase
On a Clear Day is such a great movie for fathers.
overall it's so enjoyable, because it's so real. not over-the-top, not far-fetched,
not unbelievable.
it's just really Like people in real Life.
- the really, Truly incredible things, though- happen after the mid-way pointe.
it's so moving. i just cry to think of it, now.
but i will say: You just won't be sorry You watched this.
it's a great Life movie.
and finally, - i would also say (thinking about it) - that Moms, and grandparents,
- and children, too, would benefit from watching this.
it's a testament to the power we have,
and to what we really can give.
7 people found this helpful
See all reviews
Back to top
Get to Know Us
Make Money with Us
Amazon Payment Products
Let Us Help You
EnglishChoose a language for shopping. United StatesChoose a country/region for shopping.
© 1996-2022, Amazon.com, Inc. or its affiliates