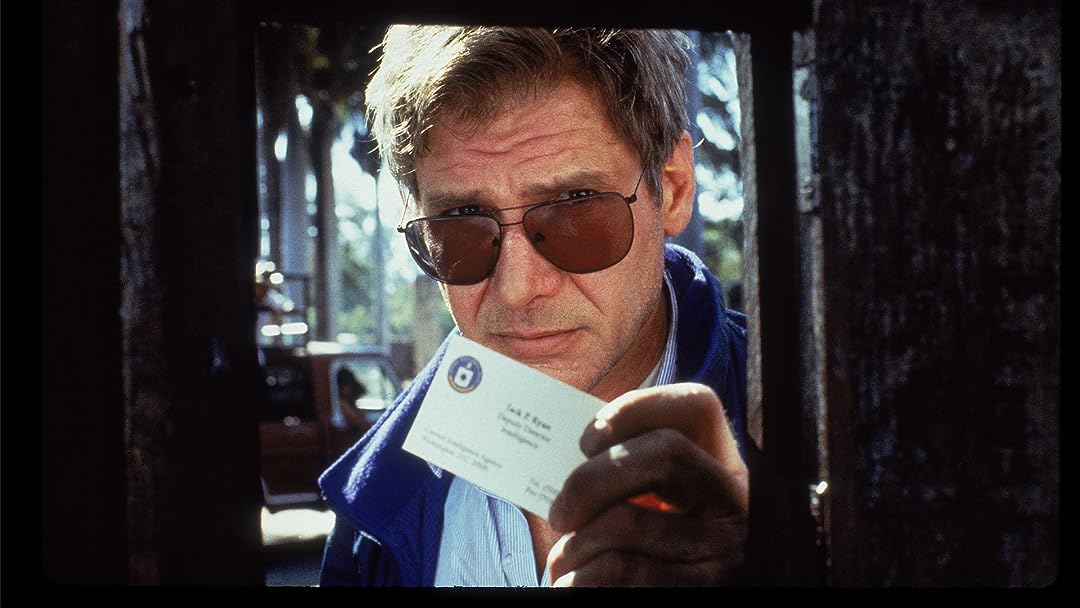 joel wingReviewed in the United States on June 30, 2020
4.0 out of 5 stars
Best adaptation of a Clancy novel Focuses on govt cover up
Verified purchase
Out of all the movie adaptations of Tom Clancy’s novels this is my favorite. It’s different from many of his other stories because it points out the corruption in government.

A friend of the president (Donald Moffat) is killed by Colombian drug cartels and he wants strong action. That leads the National Security Adviser James Cutter (Harris Yulin) and Deputy Director of the CIA Bob Ritter (Henry Czerny) to devise a plan to take out the drug lords and their operations using a ground team led by covert operator John Clark (Willem Dafoe). Things quickly escalate, people die, Cutter and Ritter try to cover things up, and Deputy CIA Director Jack Ryan (Harrison Ford) has to figure it all out.

Like the best of Clancy’s work the movie includes espionage, intrigue, double crosses, and action. It also has fantasy because while Ryan starts off doing his investigation going through phone intercepts, computer data, books, etc. he eventually goes to Colombia on his own and gets involved in the action. High level CIA officers like Ryan are bureaucrats who stay in the office. Of course that wouldn’t make a good story for a main character so Clancy and the movie has to get him involved out in the field. It also gets a bit ridiculous as Ryan passes out his business card that says CIA on it in Colombia and everyone believes him.
C

Sonic ImmersionReviewed in the United States on August 17, 2019
5.0 out of 5 stars
Attention U.S. Politicians: Never Leave One Single Soldier Behind.
Verified purchase
I saw this in the theater back when it came out in the mid-90s. While I was in high school back then, this movie still remains among my top 3 favorite movies of all time.

I don't know of a more-realistic action movie not based on a true story. This movie is expansive. The acting is superb, most notibly by Harrison Ford, James Earl Jones, and Miguel Sandoval. The diverse selection of scenes was excellent, as was the filming of the action scenes.

I liked the many inclusions of realistic aspects of the U.S. military. The conversations in every scene are like what you'd expect in everyday life, very realistic touches there. This isn't the standard Hollywood movie fare filled with cliche statements and dialog different than that in anything other than entertainment; this film is instead a very-realistic, energetic, suspenseful, and beautifully-filmed portrayal of consequenses that can and do occur all too often to members of our armed forces when politicians don't listen to them and try to run wars and military operations from their air-conditioned offices back home.

If you find the themes of this movie insightful, then I very strongly recommend you also check out the nonfiction book, "Confessions of an Economic Hit Man". I seriously doubt that most Americans are aware of the past political/military operations described in that book, e.g. the type depicted in this movie.

It's critically important that every American know that U.S. operations like these have not only occurred, and unfortunately still do occur, but that they also have done so with significantly more frequency than you realized.

For the protections of our troops, and for the protection of innocent foreign civilians caught in the crossfire, it is important that as many Americans as possible become more deeply versed in international affairs, so that we can be knowledgeable enough to hold our elected leaders accountable when they attempt to send ANY number of American troops, no matter how small the quantity of individuals, into harm's way. A soldier should never be considered expendible.

s3opsReviewed in the United States on December 10, 2019
5.0 out of 5 stars
Best film of the Clancy/Jack Ryan Series - attention to detail is important while watching.
Verified purchase
Watching this movie at age 20 is different than watching it at age 40 after years of experience in some of the domains depicted in the film.

It is difficult to write a story and make into a mainstream film something that compares and contrasts the the US National Security apparatus and the business of the international drug trade. Indeed, there are grey linkages between the two worlds that are explored in the film that connect at the highest civilian political levels.

The concept of a 'mirror' is presented very well here, or the parallel between Jack Ryan and his nemesis intelligence officer working for the Cali cartel. The use of 'mirrors' is also mentioned in the movie 'Children of Men'. Equally impressive are the showcasing of the internal political workings at the CIA and the functioning of its paramilitary arm, represented by 'Clark' - one of the most colorful of all Clancy characters.

Bravery, cowardice, and treachery are powerful themes in the movie. The movie will make you think. Color is used artfully.
6 people found this helpful

Mike Billington author of Murder in the Rainy SeasonReviewed in the United States on November 7, 2014
5.0 out of 5 stars
Clearly the best movie adaptation of a Tom Clancy novel
Verified purchase
"Clear and Present Danger" is, in my opinion, the best film adaptation of a Tom Clancy novel.
I enjoyed "The Hunt for Red October" and the other movies made from his books but they, frankly, paled in comparison to the novels. They lacked the richness of detail that are hallmarks of Clancy's books.
In "Clear and Present Danger," however, that's not the case. The director and producers have assembled a top-flight cast and have taken the time to pay a great deal of respect to the nuances of Clancy's political thriller.
Harrison Ford is great as CIA analyst Jack Ryan but, for me, Willem Dafoe as a former CIA operative now living in Panama, and Joaquim de Almeida, as a former military intelligence officer now working for a drug cartel, give the best performances in the movie. Dafoe is just world-weary enough to trust no one very much and some of his early scenes with Ford really crackle with venom. De Almeida is very smooth as the self-assured strategist for a volatile drug lord and is quietly ruthless throughout the movie.
It's a long movie but, then again, it's based on a long book and it needs a certain amount of time to properly tell the story so, in my opinion, this is not a drawback.
It comes down to this: If you have an attention span greater than a 14-year-old Twitter fanatic you should give "Clear and Present Danger" a chance to draw you into a world few of us will - thankfully - never know. If you do I think you'll agree that this is one very fine example of film making,
49 people found this helpful

RDDReviewed in the United States on February 14, 2020
5.0 out of 5 stars
One of Harrison Ford's Best Films!
Verified purchase
Phillip Noyce’s 1994 film “Clear and Present Danger” adapts Tom Clancy’s novel of the same title and is the third film in the Jack Ryan series after “The Hunt for Red October” and “Patriot Games.” It is also the second film to feature Harrison Ford as Jack Ryan. In this film, Ryan becomes CIA Acting Deputy Director (Intelligence) only to discover a secret war against a drug cartel in Columbia. As he investigates, he learns that the secret war involves not only his fellow members of the CIA, but goes all the way to the President’s office. Alongside Ford, James Earl Jones makes his third appearance as Admiral James Greer, Willem Dafoe appears as John Clark, Joaquim de Almeida as Colonel Félix Cortez, and Donald Moffat appears as President Bennett. In maintaining continuity with the previous film, Anne Archer and Thora Birch reprise their roles as Cathy Ryan and Sally Ryan. Like its predecessors, “Clear and Present Danger” is a smart thriller with both action and commentary on political issues that continue to seem relevant all these years after its 1994 release. This was also the final film set in the original cinematic chronology of the Jack Ryan series and, as such, makes a good third act in that de facto trilogy.

B. ChandlerReviewed in the United States on February 8, 2021
5.0 out of 5 stars
One of the best Jack Ryan(s)
Verified purchase
The formula is excellent and well adapted from book to big screen.

CIA Analyst Jack Ryan (Harrison Ford) Assists the President with a little drug cartel problem. When he gets physically involved with his assistance, he finds that there is more than meets the eye.

Ryan must sort the good guys from the bad. Then what is he going to do about it?

Watch again to see what clues were missed.
2 people found this helpful

GreatNorthWoodsReviewed in the United States on June 28, 2018
5.0 out of 5 stars
Will always be a great movie!
Verified purchase
Great film! Not many films made today will still be heard of 25 years from now.
10 people found this helpful

BeancounterReviewed in the United States on December 27, 2016
5.0 out of 5 stars
This is maybe the best of the series
Verified purchase
This is maybe the best of the series. "The Huey is not for rent, but it is for sale" "Two million American Dollars" Will you take a company check?" I probably took some liberty with quotes but still a great movie to watch again and again.
12 people found this helpful
See all reviews
Back to top
Get to Know Us
Make Money with Us
Amazon Payment Products
Let Us Help You
EnglishChoose a language for shopping. United StatesChoose a country/region for shopping.
© 1996-2022, Amazon.com, Inc. or its affiliates