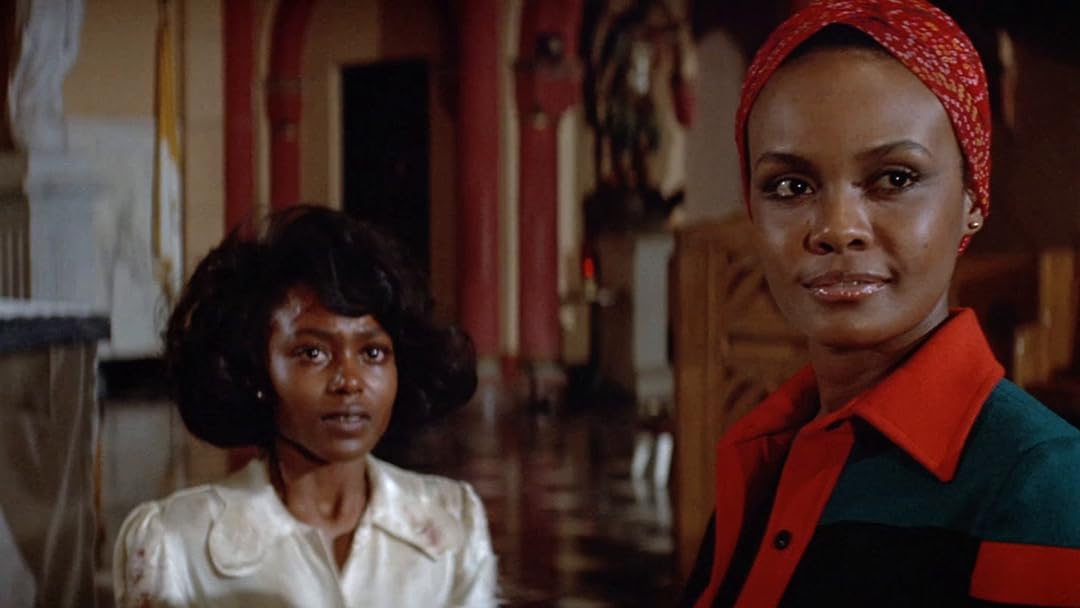 Included with Brown Sugar on Amazon for $3.99/month after trial

Watch with Brown Sugar
Start your 7-day free trial
Add to
Watchlist
Redeem a gift card or promotion code
By ordering or viewing, you agree to our Terms. Sold by Amazon.com Services LLC.
Write review

Amazon CustomerReviewed in the United States on September 17, 2020
5.0 out of 5 stars
'Great Action-Packed 'Chick Flick' From The Blaxploitation Era!'
Verified purchase
I absolutely loved this movie! Actress Tamara Dobson was outstanding as Cleopatra Jones, a smart, sexy and a brilliant federal agent who set out to destroy the drugs and save her brothers and sisters from OD'ing on heroin/the poppies from Turkey. 'Academy Award'-winning actress Shelley Winters was good as 'Mommy' who liked to 'have her way' with her 'minions'; I also liked actor Bernie Casey as Cleo's boyfriend who, too, wanted to help his brothers and sisters from doing drugs/stay clean and sober. The love scene was beautiful (there was no nudity) and I enjoyed the fight scene between Cleo and Mommy; I loved the karate scenes, I felt bad for actor Antonio Fargas's character when he, his homies and his chauffer were killed; actress Brenda Sykes' character Tiffany wasn't singing in the movie and she was very vulnerable as though she couldn't speak for herself! Some of the scenes were scary, there was a crooked cop and the lieutenant had the hots for Cleo! Cleo was gorgeous and the men couldn't stop staring at her (a head-turner)! It was great watching this classic 'Blaxploitation' flick and things sure were different in the 1970's! REST IN POWER to the following actors and actresses: Miss Tamara Janice Dobson (May 14, 1947-October 2, 2006); Ms. Shelley Winters (a. k. a. Shirley Schrift) (August 18, 1920-January 14, 2006); Ms. Esther Rolle (November 8, 1920-November 17, 1998); Mr. Bernard Terry 'Bernie' Casey (June 8, 1939-September 19, 2017); Mr. Donald Cortez 'Don' Cornelius (September 27, 1936-February 1, 2012): 'You all may be gone but you will never, ever be, forgotten.' Thank you all for making a great movie!
3 people found this helpful

Khristine JacksonReviewed in the United States on November 5, 2020
4.0 out of 5 stars
Tall ... Sexy .. and 1 Bad ..Mama .. RIP
Verified purchase
I have seen this movie more than 3 time's in over 20-something years. The late Tamara Dobson was a and could have been a force in the movie industry. I assume that her height may have been a bit much for "Casting Director's" as well as the fact. That many women of color ..struggled for decent role's in the 1970's. Part's that did not depict them as "Junkies,Hooker's or Arm candy" were avoided by women like Cicely Tyson,Ruby Dee,etc so to speak.? The man who wrote the screen play and produced this film. .. is Max Julien. He is now 87 years old.. He starred in "The Mack-1973, Thomasine & Bushrod-1974 ,etc, project's.". He did not produce the follow-up "Cleopatra Jones & The Casino of Gold". Many of the supporting cast member's we all know from many motion picture's and television. Like the late Albert Popewell,Bernie Casey,Shelley Winters(2X Academy Award winner)...Antonio Fargas,,Esther Role,,Micheal Warren,Dan Frazer ,,Don Cornelius (Soul Train) and Francesca Hilton( Zsa Zsa Gabor's daughter & Conrad Hilton's only daughter,,(related to->) Elizabeth Taylor's 1st father n law,and Paris Hilton's great-grandfather.) I have always liked this movie for what it stood for .. A STRONG BLACK WOMAN ..! No dig on Pam Grier,Diahann Carroll,etc. Ms. Dobson was Tall,Confident and had the looks..that ..would certainly intimidate the average man. Her death at the age of 59 in 2006 from Multiple Sclerosis ..was certainly a blow..she did leave behind other movies she co-starred in.. We will never know what promise she could have held. The cast did a superb job....The corvette she drove and the wardrobe certainly complimented ...her character . Very few women from her generation could pull off an "Afro" and those heel's ..? Let's hope that they don't attempt to remake this movie again..? Who would take on such a part..? Ms. Dobson ..will always be associated with this role..
One person found this helpful

joel wingReviewed in the United States on May 24, 2021
4.0 out of 5 stars
Black female special agent coming to serve justice
Verified purchase
Tamara Dobson is an American special agent who angered a drug kingpin played by Shelly Winters. It’s an interesting concept to have a black female hero in the 1970s. She looks the part too with a big afro and a designer wardrobe. It shows the opportunities that Blaxploitation opened up in Hollywood. However it wasn’t always executed well. The first action scene for instance wasn’t that great. It’s obvious that Dobson didn’t know how to fight. The other scenes with gunplay and car chases were much better. It also had a huge production value with the start featuring a jet fighter bombing a heroin poppy field. Overall this was a superior release in the genre.
One person found this helpful

Darryl WrenReviewed in the United States on February 21, 2017
5.0 out of 5 stars
Beautiful and Tough
Verified purchase
First saw it in the Summer of 1973 (we tried to get into "Enter The Dragon" but the line was way too long...obviously I got to see it at a later date because it too was a classic) and I still love watching it. We had two African American 'female' heroes in the movies (Tamara Dobson and Pam Grier...three if you count Teresa Graves in "Get Christie Love" on TV) which prior to growing up in the seventies was unheard of. "Cleopatra Jones" was a great movie (for it's time) and it brings back good memories now owning it and being able to watch it when I want. I thought it was one of the 'better' "Blaxploitation" era movies.
11 people found this helpful

T.NAKAJIMAReviewed in the United States on December 31, 2001
3.0 out of 5 stars
Major Company's Answer to Blaxploitation Vogue
Verified purchase
As a good example to see how a major studio handles topics in vogue, "Cleopatra Jones" is worth watching. I mean, there is nothing new in this film except the fact that more money is invested than in "Coffy" or "Foxy Brown," small, independent company's works. The formula is basically the same as those of so-called blaxploitaion films, but the shoot-out, car chase, or explosion scenes are all updated.
This movie is about Cleopatra Jones, or "Cleo," sexy, cool, no-nonsense secret agent for government, who fights against drug syndicate. And she uses karate (a bit). Well, the rest is as you guess. Tamara Dobson is remembered as Cleo, and rightly so. Her tall, slender body fits exactly Cleopatra's character, and she is pretty impressive, and her acting is not bad.
However, much, much more impressive is Shelley Winters (Oscar winner!!), who plays "Mommy," ruthless mastermind behind drug business. Her hammy performance -- wearing a black leather jacket, yelling "I will kill HERRR!!! -- is something you see in your nightmare. She overacts so much that if Golden Raspberry Awards had been there back in the 70s, she surely would have win the prize of the decade. The final scene, in which Cleo fights Mammy (yes, they fight!!) in a junkyard, will become ... well ... a bizzare memory for you.

Mr Doug GordonReviewed in the United States on April 2, 2003
5.0 out of 5 stars
Campy '70s Fun!
Verified purchase
I have always really liked this movie since it came out in 1973. I have watched it countless times through the years on TV, but haven't seen it for a while on TV so I picked it up on DVD. Although the DVD doesn't offer a lot of features, the picture quality is good and it's presented in it's original cinemascope format. This was one of the higher budget "blaxploitation" flicks from the '70s. Seeing it as a kid I thought it was the coolest movie. Now that I am a lot older, it's still cool, but in a campy/fun way. The plot consists of a government agent named Cleopatra Jones (Tamara Dobson)who is hired to rid the US of drugs. She goes after one of the "Queenpins" of the drug trade called Mommy, played by Shelley Winters. The one thing I never forgot about this movie was Cleopatra's kickin' Corvette complete with a cassette deck, which was really high-end at the time! (Most cars had 8-track players) Along with this was her funky fashions! If you like the '70s action genre, this is a great addition to your library.
36 people found this helpful

Lexis BReviewed in the United States on August 3, 2020
4.0 out of 5 stars
Great fun
Verified purchase
This movie is so seventies, but Ms. Jones is fly, the plot is fun, and there is A LOT of social commentary that is relevant today. It is also cringey at times, due to it being from a less enlightened time, but I loved it! Celebrating a strong, sexy, fierce, intelligent, desirable, effective black woman.

bratzillaReviewed in the United States on March 11, 2015
4.0 out of 5 stars
Wow!!!
Verified purchase
I can't believe that I first saw this movie over 40 years ago! I was a little girl and I remember thinking wow, I had never seen a black female karate expert and a CIA agent. Forty plus years later, I'm over 50 years old and when I looked at this movie again I still said wow. I have to take away a star because I shouldn't condone the violence. But I can't help myself I have to say it; Do your stuff Cleopatra!!!
7 people found this helpful
See all reviews
Back to top
Get to Know Us
Make Money with Us
Amazon Payment Products
Let Us Help You
EnglishChoose a language for shopping. United StatesChoose a country/region for shopping.
© 1996-2022, Amazon.com, Inc. or its affiliates