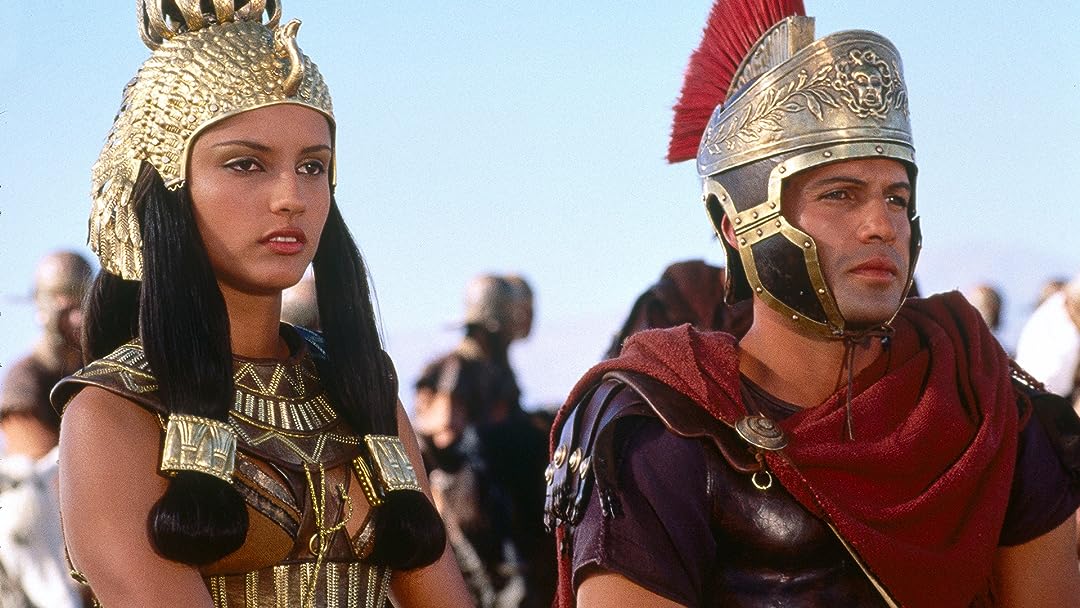 Season 1
(638)
199913+
In the rich tradition of a Cecil B. DeMille epic, "Cleopatra" is a four-hour miniseries filled with pageantry and spectacle. Set against the pyramids of Egypt and the colossal columns of Rome, "Cleopatra" is the classic tale of the young Queen of the Nile.

Lanna E.Reviewed in the United States on March 17, 2019
3.0 out of 5 stars
Nostalgic Buy
Verified purchase
The packaging is beautiful. Timothy Dalton is a great Caesar. Billy Zane plays an okay Anthony. Leonor Varela has her moments playing Cleopatra. I got this mainly for nostalgic reasons. I watched this back when I was in middle school and somehow parts of this mini-series stuck with me. -SPOILERS FOLLOW FROM HERE ON OUT-Memorable moments is when Cleopatra unrolls out of the carpet. Caesar being stabbed by the senate (et tu Brutus). Cleopatra getting bit by the asp. After seeing it again, this portrayal of the great Cleopatra is quite cheesy at moments. As for the DVD, there are absolutely no options for captions. If you need captions, I would steer clear from buying this DVD. Captions should be standard for video options. There are hard of hearing and deaf people who need captions in order to enjoy watching things. FYI: The digital option is only for Mill Creek Entertainment platform only. It does not transfer to Amazon, Vudu, or anything else.
19 people found this helpful

animatecastleReviewed in the United States on May 12, 2017
4.0 out of 5 stars
This is not a great movie. It's worth watching if you have an ...
Verified purchase
Let's be clear. This is not a great movie. It's worth watching if you have an interest in the story of Cleopatra. Leonara Valera is probably 10x more beautiful than the real Cleopatra and 10x less the actress. She has her moments, but almost no one can live up to this task. She does her best, and her beauty lives up to the legend though her acting does not, at least not all the time. The real stars are Caesar and Marc Antony. I never thought Timothy Dalton was a real actor but he actually is a convincing Caesar. Elder, commanding, not overblown. The same is true of Billy Zane. He is a convincing Antony. Likable, dionysian, filled with PTSD. The film skips all of the stuff that happens in Asia that is covered by the book, moves way too fast through the buildup to Actium, etc. But any Cleopatra movie is really a study in characters. This one has 2 of 3 convincing characters (plus Octavius, who is the little jerk I picture him as), plus a serviceable and beautiful woman acting as Cleopatra. It's not great. But it is worth watching for the interested.
10 people found this helpful

AliReviewed in the United States on January 20, 2018
5.0 out of 5 stars
Huge Epic
Verified purchase
Epic, lush spectacle, filled with huge, non-cgi sets, and powerful performances from two wonderful actors; Timothy Dalton as Caesar, and Billy Zane in his passionate portrayal of Marc Antony. It's hard to believe THIS is a made-for-tv production, but it did have a reported budget of $70,000,000, so that might explain why this thing looks so great. Highly enjoyable, old school epic. The dvd transfer is excellent as well, and features the full length, 177 minute version. The only regret is that "Cleopatra" was not filmed in a theatrical, widescreen aspect ratio; being a made for tv production from 1999, the picture format is 4x3, in accordance with the shape of tv's before flat-screen sets were introduced. I should also mention the rousing film score, which is also epic and worthy of any big screen production. Absolutely worth the purchase.
16 people found this helpful

LT Turner JrReviewed in the United States on February 10, 2022
5.0 out of 5 stars
Perfection!
Verified purchase
Ever since I was a child, I have always been fascinated with Egyptian History. I watch all movies, documentaries, etc. regarding Egypt. And the story of "Cleopatra" is also one of my favorites. This version was wonderful. I actually watched it in one sitting. Glued to the couch! Excellent actors and actresses. Very well done. :)

D.F.Reviewed in the United States on April 21, 2020
5.0 out of 5 stars
Pretty Accurate
Verified purchase
This movie is about 90% accurate according to the history books. The characters costumes, wigs, and make-up were perfect for the time setting. The acting was superb and storyline wasn't boring. Great movie overall.
3 people found this helpful

FrKurt MessickReviewed in the United States on March 16, 2006
4.0 out of 5 stars
Revisioning history
Verified purchase
This production of Cleopatra, intended originally as a miniseries on television, is a reasonably good production with significant differences from the block-buster Hollywood version starring Elizabeth Taylor, Richard Burton and Rex Harrison. Cleopatra here is depicted as someone striving to maintain her own position, not necessarily someone with an eye toward world-wide conquest. Cleopatra is portrayed as an inexperienced person (both sexually and politically) until tutored by the more experienced Romans. She comes to understand her fate is inextricably intertwined with Caesar, then Antony, but her love for Antony keeps her from making the politically expedient move of giving in to Octavian. Apparently two Roman rulers are enough for one lifetime.

Like the earlier film production, this one plays fast and loose with the actual history, albeit in different ways. The figure of Octavian/Augustus is far more present earlier here than he was in history; for a production that goes on the greater part of three hours, remarkably little detail about the history is brought forward, and I found that distracting. The last hour could have easily been recut into a half-hour, and some judicious editing throughout the rest of the film could make it into a much better paced two-hour film.

The acting was tolerable but generally unconvincing. Timothy Dalton as Julius Caesar, Billy Zane (who got top billing) as Marc Antony, and Rupert Graves as Octavian were not up to their usual acting standards in this production. Dalton was not very expressive, and Zane and Graves were overly so (Graves plays an almost flippant character, not at all in keeping with the historical Augustus). Ironically, the title character Cleopatra was played by relative newcomer Leonor Varela, who was probably the best actor in the piece.

The sets are great, as are the costumes (if not always appropriate - Cleopatra rarely wore Egyptian garb, preferring her more native Greek), and the music is worthwhile. The battle scenes are pretty typical television fare (with occasional glitches that make these seem more minor skirmishes than great battles). Unfortunately, the sea-going scenes of ships looked far too obviously fake to suspend disbelief.

This is a pleasant diversion, but in the end not a truly memorable production save for bits and pieces here and there. But it is a good thing that such productions are still being undertaken.

Robin BeltramiReviewed in the United States on July 27, 2018
5.0 out of 5 stars
Fabulous, Gorgeous people and scenery.
Verified purchase
This was just fantastic. I've watched it twice and will probably watch it again. Perfect Cleo, Caesar, and Marc Antony. Gorgeous everything, and a great story. Terrific Roman legions, great Octavian, Sexy Caesar and Marc Antony, exquisite horses and ships.
4 people found this helpful

kurt smithReviewed in the United States on August 11, 2018
4.0 out of 5 stars
No closed caption
Verified purchase
Being hard of hearing this is important to me. If it's a problem for you too don't buy this movie otherwise it looks great & plays as expected.
9 people found this helpful
See all reviews
Back to top
Get to Know Us
Make Money with Us
Amazon Payment Products
Let Us Help You
EnglishChoose a language for shopping. United StatesChoose a country/region for shopping.
© 1996-2022, Amazon.com, Inc. or its affiliates