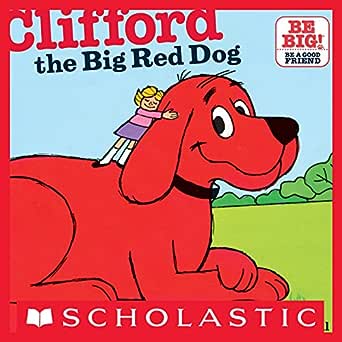 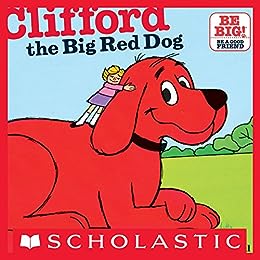 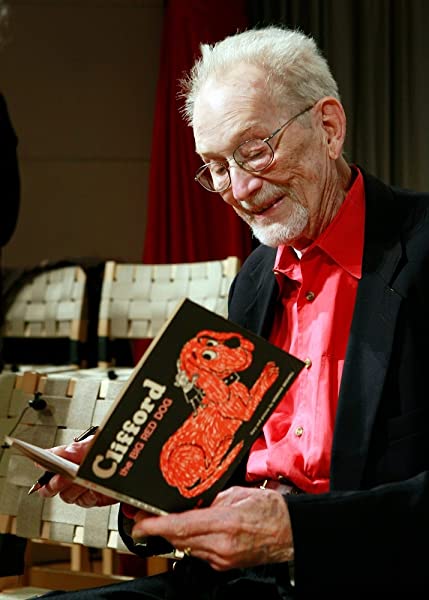 There's no denying that kids love Clifford®. The Big Red Dog® has been a favorite since Norman Bridwell created him over 40 years ago. "I was working as a commercial artist in New York City. There wasn't much work, so I made some sample pictures and took them to several publishers. They all rejected my work. But one editor suggested that I try writing a book of my own to illustrate. I had done a painting of a little girl with a big red dog. That seemed like a funny idea, so I made up a story about them. I increased the dog's size from as big as a horse to as big as a house. My wife named the dog Clifford, and we named the little girl Emily Elizabeth after our daughter. In three days I had written the story and drawn the pictures for Clifford The Big Red Dog. When Scholastic called and said they wanted the book, I was stunned." Bridwell, who grew up in Kokomo, Indiana, lives now on Martha's Vineyard, Massachusetts, with his wife, Norma.
For more information about Norman Bridwell, visit: scholastic.com/tradebooks --This text refers to an out of print or unavailable edition of this title.

Fuzzy felt on the cover lets readers pet the "biggest, reddest dog" on the block in Clifford the Big Red Dog 40th Anniversary Edition by Norman Bridwell. In this original 1963 text, young Emily proudly introduces her oversize pet and his unusual tricks. Ages 3-6.
Copyright 2002 Reed Business Information, Inc. --This text refers to an out of print or unavailable edition of this title.

Emily Elizabeth has a big red dog--the biggest, reddest dog on her street, and his name is Clifford. How big is he? He's so big that when he runs after cars, he catches them in his mouth, and his doghouse is bigger than Emily Elizabeth's house. Needless to say, he makes an excellent watchdog. Children love the idea of the things you could do and the fun you could have with a giant dog, and Norman Bridwell's delightful, Clifford-proof board-book edition will not disappoint. (Baby to preschool) --This text refers to the board_book edition.
Read more

4.8 out of 5 stars
4.8 out of 5
1,258 global ratings
How are ratings calculated?
To calculate the overall star rating and percentage breakdown by star, we don’t use a simple average. Instead, our system considers things like how recent a review is and if the reviewer bought the item on Amazon. It also analyzes reviews to verify trustworthiness.

Melissa S.
5.0 out of 5 stars Perfect book for 2-3 year olds!
Reviewed in the United States on April 2, 2014
Verified Purchase
My almost 2-year-old son LOVES dogs and has recently been interested in the Clifford show on PBS...we got him this book and he absolutely loves it! It's a great board book for dog or Clifford-lovers! It has 28 pages (14 pages to turn), the pages are nice and heavy so they cannot be torn, and the sentences on each page are short and simple.

The story goes: I'm Emily Elizabeth, and I have a dog. My dog is a big red dog. Other kids I know have dogs too. Some are big dogs. And some are red dogs. But I have the biggest, reddest dog on our street. This is my dog Clifford. We have fun together. We play games. I throw a stick and he brings it back to me. He makes mistakes sometimes. We play hide-and-seek. I'm a good hide-and-seek player. I can find Clifford, no matter where he hides. We play camping out, and I don't need a tent. He can do tricks too. He can sit up and beg. Oh, I know he's not perfect. He has some bad habits. He runs after cars. He catches some of them. He runs after cats too. We don't go to the zoo any more. He digs up flowers. Clifford loves to chew shoes. It's not easy to keep Clifford. He eats and drinks a lot. His house was a problem, too. But he's a very good watchdog. The mean boys don't come around any more. One day I gave Clifford a bath. And I combed his hair, and took him to the dog show. I'd like to say that Clifford won first prize. But he didn't. I don't care. You can keep all your small dogs. You can keep all your black, white, brown, and spotted dogs. I'll keep Clifford...Wouldn't you?

JenniferTop Contributor: Baby
5.0 out of 5 stars Cute book
Reviewed in the United States on July 26, 2018
Verified Purchase
Colorful. We got red because infants can see the color very well. Good size for travel. Minimal wording. Pages haven’t torn which is nice.
Read more

5.0 out of 5 stars Cute book
By Jennifer on July 26, 2018
Colorful. We got red because infants can see the color very well. Good size for travel. Minimal wording. Pages haven’t torn which is nice.
Images in this review

Rachael E. Stanley
3.0 out of 5 stars Good for practicing reading, boring to read
Reviewed in the United States on November 18, 2014
Verified Purchase
This is not a very strong Clifford book. It would be a good book for a child to practice reading, but that is how it also feels. It doesn't really have a story. It just describes Clifford. He's big. He's red. There are other red dogs. There are other big dogs. etc. etc. It's kind of boring. If you're looking for a Clifford book to read to a child, I would not pick this one. If you're looking for a Clifford book to help a child practice reading, this would be a good one to use - until they get bored with it. Check out some of the other Clifford books for better ones, Small Red Puppy, Firehouse, Halloween, Champion, etc.
Read more
7 people found this helpful
Helpful
Report abuse

Hollyann
5.0 out of 5 stars Clifford is the best
Reviewed in the United States on November 21, 2020
Verified Purchase
I’ve always loved Clifford since I was a young child so I knew I had to get this for my daughter. It’s the original story, so make sure you buy this one if you are buying other Clifford stories. Would make a great gift.
Read more
Helpful
Report abuse

carlar
3.0 out of 5 stars Real Book wins over Kindle
Reviewed in the United States on August 13, 2017
Verified Purchase
I downloaded this on my iPad Kindle for my 3 year old granddaughter. She really didn't enjoy the Kindle experience as much as turning pages in a real book, looking at pictures, and interacting with the story. She much prefers her Clifford paperbacks which we read again and again.
Read more
3 people found this helpful
Helpful
Report abuse

Cathy Fields
5.0 out of 5 stars She hasn't gotten yet. She's 33 and she's hasn't been to the adoption registry to pick up yet
Reviewed in the United States on December 18, 2018
Verified Purchase
I've read this to my daughter Dianne Mary Flynn when I was carring he. And also after I had her because this was the first book I've read when I was younger.
Read more
Helpful
Report abuse

Judy
5.0 out of 5 stars Very Cute Book
Reviewed in the United States on April 26, 2019
Verified Purchase
Classic Clifford! Bought this along with several other Clifford books and a Clifford stuffed toy for my grandson. Perfect gift!
Read more
One person found this helpful
Helpful
Report abuse

Call_Me_L
5.0 out of 5 stars Great kids book
Reviewed in the United States on September 20, 2019
Verified Purchase
Getting one of my childhood favorites for the next generation!
Read more
2 people found this helpful
Helpful
Report abuse
See all reviews

Oye
2.0 out of 5 stars Okay..ish
Reviewed in the United Kingdom on June 6, 2014
Verified Purchase
My 3 year old absolutely lives Clifford, so, is prepared I'm sure to put up with the terrible, terrible drawing of Clifford in this book that look absolutely nothing like the original red dog! Surely, this book hasn't been produced by the original artists? I found some of the storyline very annoying like Clifford always eating shoes...and never being corrected by his adoring Emily Elizabeth; while of course her jealous friends wear a scowl on their faces. Quite annoying but given 2 stars for the entertainment value.
Read more
One person found this helpful
Report abuse

Ann
5.0 out of 5 stars Good read
Reviewed in the United Kingdom on December 16, 2018
Verified Purchase
An old favourite. I read it to my older grandchildren when they were very small and now have a three year old grandson who loves it now
Read more
Report abuse

Apricot
4.0 out of 5 stars Spoiler: He takes a bath in a swimming pool
Reviewed in the United Kingdom on March 11, 2016
Verified Purchase
Very simple book to read, not exactly a story. May be a bit boring to some, but considered a classic. The illustrations are clear and nice to look at, and there are many books in the series which can make having Clifford books more fun.
Read more
Report abuse

Coops
5.0 out of 5 stars Five Stars
Reviewed in the United Kingdom on June 18, 2016
Verified Purchase
Bought these for my young daughter and she loves Clifford so loves any book with him in.
Read more
Report abuse