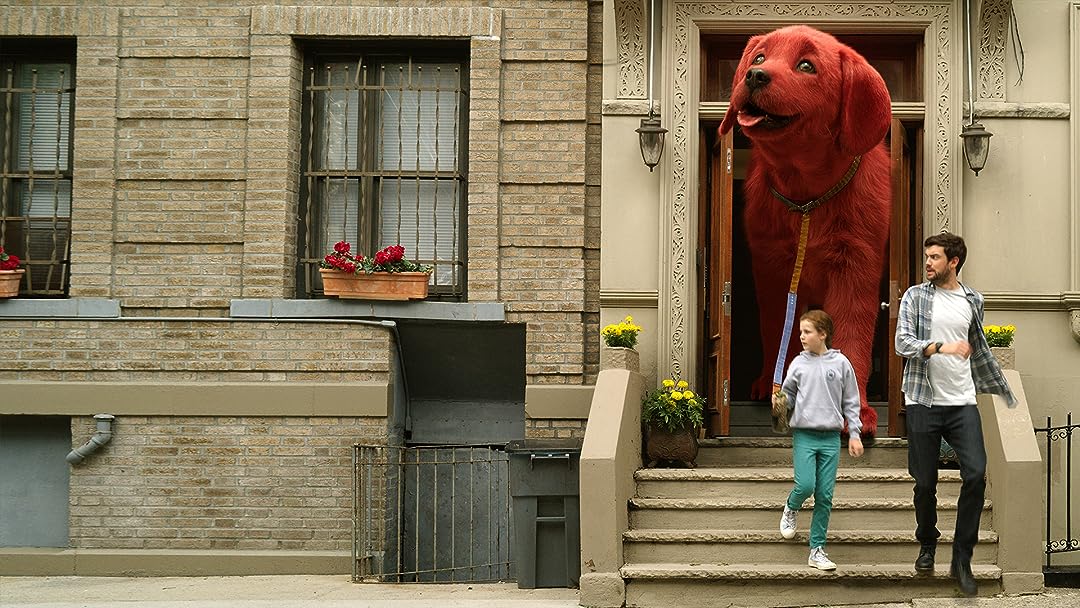 bethReviewed in the United States on November 27, 2021
2.0 out of 5 stars
Disappointing
Verified purchase
My kids were so excited to see Clifford, a beloved children's book character, come to life. Clifford was cute, and Emily Elizabeth's devotion to him was touching, but the story was quite outlandish. In the process of trying to save Clifford, Emily asks a friend to lie for her, drives a car down a busy city street, skips school and lies about it, and eventually stands off with the police!! While I applaud bravery and standing up for those you love in a healthy way, this movie took that message to an unhealthy place. Of course, everything turns out well for Emily and others in the end, and Emily's mom who rightfully should have been furious with her irresponsible brother--the one in charge of Emily while all this occurred--just lets it all roll off her back. For me, personally, tying everything up with a good message at the end just doesn't erase the ridiculous, illegal, dishonest stunts it took to get there. It sends the message to children to stop at nothing to get what they want, even if it means disregarding their parents and breaking the law.
42 people found this helpful

SlawekReviewed in the United States on November 19, 2021
2.0 out of 5 stars
Not what I was expecting
Verified purchase
Original cartoon is very innocent. This movie is very sexual. Lot of scenes with butt sniffing wth. Thats not normal dog toys looking like male private parts. All Adults lie all the time. Like someone is trying to show kids lying is ok. Very uncomfortable to watch. Very disappointed. Whomever directed the movie is sick.
27 people found this helpful

Jacob QuantReviewed in the United States on December 20, 2021
2.0 out of 5 stars
Not like the books; my kids did not enjoy, wish I could've rented instead
Verified purchase
Since this is a kids' movie I'll give it a pass on plot holes, poor character development, etc. However, I expected it to be fun, engaging, and/or heartwarming. Instead, my kids (~4y, admittedly younger than the likely target audience) had a tough time following along because it popped from one thing to another without much connection or explanation. My wife and I were disappointed that, unlike in the books where Emily Elizabeth is slow to anger and respectful of others, in the movie she is angsty, her mother and father are absent in any positive/meaningful way, and she even gets praised and rewarded for rather foolhardy behavior.
11 people found this helpful

Isabel RobertsReviewed in the United States on November 11, 2021
1.0 out of 5 stars
clifford the big red dog
Verified purchase
Why can i not watch on my samsung tv its unsupportive but can watch on my laptop
11 people found this helpful

P. LunaReviewed in the United States on February 22, 2022
3.0 out of 5 stars
Movie review aside, it is just an Ok product
Verified purchase
Movie reviews show mixed comments. It is a PG (parental guidance) movie, not for all audiences, so parents should guide their kids when watching. You saw the other reviews about the movie and you can also find reviews of the movie itself elsewhere.

For adults, it is a lighthearted movie. For kids... well, let parents say their opinion. See their reviews. I bought this movie for my wife because she likes dogs. We never watched the cartoon, so we have no point of reference to compare, and we do not consider ourselves as "fans" of Clifford. She liked it as all she wanted was a lighthearted movie with dogs. The bad uneducational behavior of the kid in the movie that parents point out is irrelevant for us as we are adults.

The product itself is a DVD in many languages, which is good, and it has no extras. Case has the same disc holding mechanism used by a Wii game case. For some reason during shipping the disc got loose inside the case. Fortunately there was no visible damage when watching the movie.

For adults it is a just Ok product, with a story that seems a bit childish, but parents do seem to have issues with it. So it is up to you to decide to buy or not.

RainflowerReviewed in the United States on December 19, 2021
5.0 out of 5 stars
Clifford
Verified purchase
I watched this last night and was laughing my head off it was so cute I hope that they might sometime in the future make another live action sequel
7 people found this helpful

SavedReviewed in the United States on January 15, 2022
5.0 out of 5 stars
We love this movie!
Verified purchase
My teenagers and I loved this movie!!!
7 people found this helpful

Korey WilliamsReviewed in the United States on November 11, 2021
5.0 out of 5 stars
Great movie for family
Verified purchase
Laughter, excitement, elements of fear, overcoming bullying, all with a community coming together for that loveable Big Red Dog!
8 people found this helpful
See all reviews
Back to top
Get to Know Us
Make Money with Us
Amazon Payment Products
Let Us Help You
EnglishChoose a language for shopping. United StatesChoose a country/region for shopping.
© 1996-2022, Amazon.com, Inc. or its affiliates