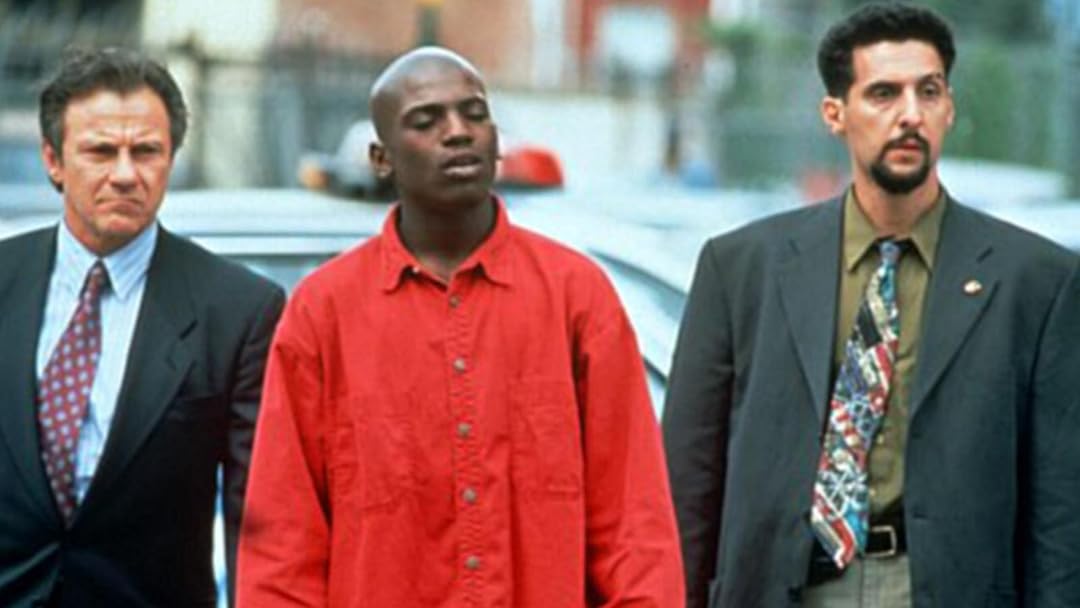 (504)
6.92 h 9 min1995X-RayR
A drug dealer is killed and a man confesses - but a tough Brooklyn cop doesn't buy it, and pursues two other pushers in a gritty, no-nonsense crime story.

joel wingReviewed in the United States on October 18, 2020
5.0 out of 5 stars
Overlooked Spike Lee Joint on the cost of the crack years on the African American community
Verified purchase
Clockers is a Spike Lee Joint about the cost of the crack years. The opening sequence drives that home as it pictures a series of dead black people killed because of drugs. This is the kind of film that Spike Lee was made to make. The story is loosely based upon a book by Richard Price. It focuses upon a local drug dealer Strike (Mekhi Phifer). The man he works for is Rodney Little (Delroy Lindo) who is like a father figure to him. There are also two detectives Klein (Harvey Keitel) and Mazilli (John Turturro).

The dynamic between the police and dealers is set up in the next scene. Strike and his crew are outside a housing project doing their business when the cops roll up on them. They humiliate them by grabbing their faces and demanding to see underneath their tongues and then have them pull down their pants to look in their butt crack claiming they might be hiding drugs there. The police know they’re not going to find anything it’s just to let them know that the police can do almost anything to them anytime even though it won’t end the drugs.

The cost of dealing is introduced next as it turns out Strike has ulcers because of the stress that dealing puts on him. He constantly has stomach pains.

Later the movie focuses upon Rodney’s candy store where he also gives haircuts. There are all kinds of kids and teenagers there that he preaches to about how he’ll take care of them and put money in their pocket if they work for him. Strike does the same thing taking in a kid from the projects.

Finally, there’s Officer Andre (Keith David). He stops by the projects Strike deals at to give a talk to him and the little kid Strike is trying to recruit. He gives speeches about how the kid needs to stop hanging around the dealers and how Strike needs to get out of drugs otherwise he’ll end up dead. He knows that arrests aren’t the answer so he’s trying to appeal to people’s hearts and minds. It’s an uphill battle but he’s not giving up.

These are all themes of the film. One, the police aren’t fighting a war on drugs they’re just trying to exert power over black men. Second, the drug game is about black men like Rodney and Strike exploiting the younger generation. Third, Officer Andre is trying to play a counter father figure to Rodney. They both know the community is at stake with the dealers winning. Andre knows there’s a lack of positive African American male role models and he’s trying to be that.

The movie comes to focus upon Strike. He’s smart and the ulcer is a sign that he knows what he’s doing is wrong and that it will eventually get to him. The question is whether he’ll get out of the game before it’s too late.

This is one of Lee’s really good movies that usually gets overlooked for his more well known releases. It’s well worth watching.
C

Crazy SvenReviewed in the United States on September 12, 2018
4.0 out of 5 stars
CLOCKERS: 1995: Brooklyn Spike Lee Style
Verified purchase
When CLOCKERS came out in 1995, I missed it entirely and never got around to renting it later on, but just saw it now in 2018. Spike Lee is a hit-or-miss with me as far as his films go. He tries too hard sometimes to make a long lesson out of a film and keep it exciting at the same time. At 129 minutes, Clockers is a tough film to rate, because it is an important film in spite of it being a little too long and a little too confused in the plot department. The acting is uneven and the story can become confusing at times, but that does not make it any less a classic. Best if watched either straight through when you have time, or divided in tow equal parts due to length.
One person found this helpful

A. ConklinReviewed in the United States on September 4, 2019
5.0 out of 5 stars
Clockers
Verified purchase
Clockers tells a very intricate story perfectly This movie has a lot going on and the actors are perfectly cast. I think this is one of Spike Lees best movies. I love seeing his signature dolly work
3 people found this helpful

AngelaReviewed in the United States on October 9, 2019
5.0 out of 5 stars
"Keep Your Head To The Sky"
Verified purchase
"Children of the Ghetto" are no different from those on the outside. They hope and dream, but when left unfilled a burning hole consumes their insides.
One person found this helpful

JLea D. GibsonReviewed in the United States on April 1, 2020
2.0 out of 5 stars
Blast from the past
Verified purchase
Blast from the past. I still really enjoy this film now that I’ve watched it with adult eyes. I still can’t stand Spike Jones, & his racist agenda in his films past and or present.

/sbin/init 0Reviewed in the United States on September 6, 2014
5.0 out of 5 stars
A Masterpiece of Directing by Spike Lee
Verified purchase
A tragicomedy in the sense that the protagonist does not die. A dystopia in the sense that no one in his right mind would want to be any one
of these characters. A masterful work of cinema in that it takes WORK to convince oneself that the characters being portrayed are anything less that real people living in the same world as you or me,...just a few blocks deep into the wrong neighborhood. See it!

AMAZON SHOPPERReviewed in the United States on March 23, 2021
3.0 out of 5 stars
Just my opinion
Verified purchase
Three stars for the five star for Mekhi Phifer really hated his character
See all reviews
Back to top
Get to Know Us
Make Money with Us
Amazon Payment Products
Let Us Help You
EnglishChoose a language for shopping. United StatesChoose a country/region for shopping.
© 1996-2022, Amazon.com, Inc. or its affiliates