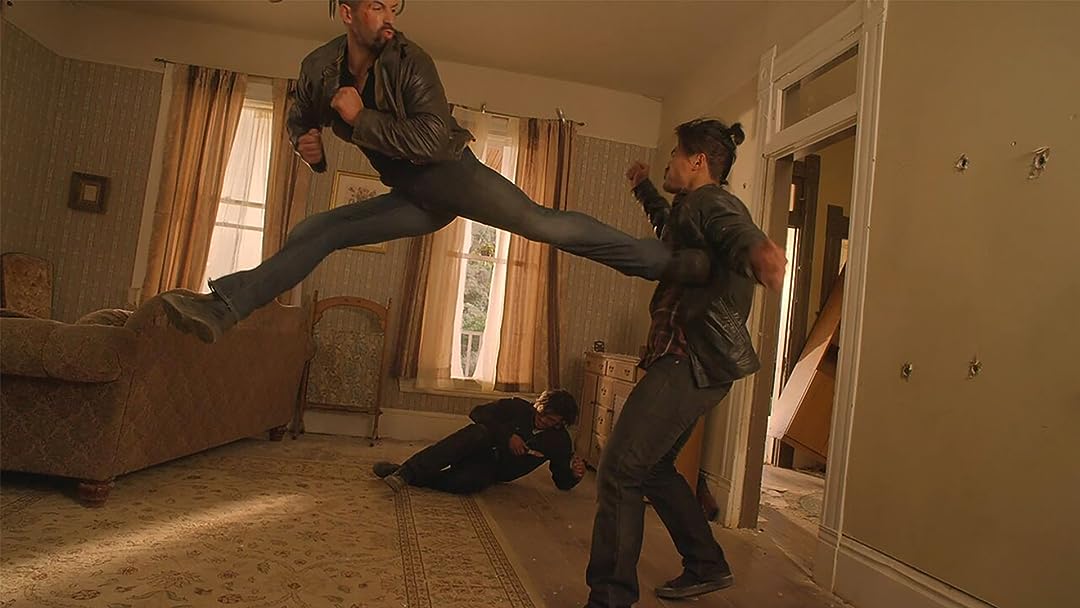 (496)
5.01 h 25 min2015X-Ray18+
A rogue soldier turned outlaw is thrust into a relentless fight with a corrupt sheriff, his obedient deputies, and a dangerous drug cartel in order to protect his sister and her young daughter.

Amazon CustomerReviewed in the United States on June 25, 2021
2.0 out of 5 stars
Bang bang
Verified purchase
For all the action scenes it was a SLOW movie. And the continuity and goofs were so frequent that they were distracting me. I'm guessing there were more rounds fired in this movie than in the whole revolutionary war. Amazing how they seemed to have 15 rounds in a shotgun, 80 round magazines on the rifles and 30 round mags in their pistols. Must be a new technology. And when embarrassingly bad marksmanship too. Jerking the triggers, waving barrels around while firing, never saw anyone use the sights. The amazing bulletproof walls were probably not needed since no one appeared to be able to hit anything. Martial arts was mostly cool. Hero was tough, but dumb as a rock. Running miles back the the ranch when there was a perfectly good SUV sitting there. Worrying about ammo and then leaving a AR with a clip in it laying on the floor. Oh... I want one of the vests the sheriff wore at the end... it was self healing... holes... then no holes.
This movie went WAY past my limits of suspended disbelief. I watched the whole thing... learn from my mistake.
2 people found this helpful

John GarganiReviewed in the United States on August 16, 2021
3.0 out of 5 stars
THE POSITIVES AND NEGATIVES ABOUT THIS FILM:
Verified purchase
okay, the positives: Scott Adkins is a fantastic action star and the fights are brutal and realistic, notice I said specifically, the fights...Secondly, he is up against almost impossible odds here, and yet, you just know he is going to triumph, and thirdly, Madison Lawlor is gorgeous!

unfortunately, the negatives: plot is flimsy, acting is so so, mostly hackneyed....guns rarely run out of bullets, and bullets rarely hit their targets......Cartel would NEVER send the top man on a mission like this, especially against someone who wiped out so many of your men, single handedly , when he rescued his niece ( that being the gorgeous Madison Lawlor).....yet they keep on coming, keep approaching and going into the house he is holed up in, knowing already, that he is an outstanding special forces man.

I would say Adkins killed a good 25 men total in this movie, and yet, he rides off into the sunset on a motorcycle of which he has no papers for, and him being a wanted man, and to top it off, he was stabbed in the abdomen....no problem! LOL....

could just imagine the Mother and Daughter ( yes, the beautiful Madison Lawlor, lol) trying to explain all of this to the one State Police guy that comes at the end.

380 megaXtremeReviewed in the United States on July 27, 2020
1.0 out of 5 stars
pathetic
Verified purchase
Scott adkins is a terrible director, hes been ok in a few movies like "ninja" but this one is complete garbage. It's so cliche and ridiculous it reminds me of an episode of "walker texas ranger" i think that was the name of that old chuck norris show or it reminds me of "lone wolf mcquade" I mean this thing just sucks to the extreme...the cinematography is boring...the sets are boring...the two girl actors suck and the bad guys suck too, they all seem like they're straight out of a cut rate tv show from the 80's and the filming and lighting and everything remind me so much of a sucky 80's tv show. I couldn't finish it, it was so lame.
4 people found this helpful

LohoclaReviewed in the United States on June 26, 2020
3.0 out of 5 stars
Plot and PewPewPew was dumb but the SOCK/BAM/POW stuff A-OK
Verified purchase
Tried and true type plot that suffered from horrible dialogue and acting. B-/C+ overall.

Pretty much a cast of unknowns except for Adkins and Nick "That Guy" Chinlund. Seriously, I had no idea what his name was...seen him in so many movies.

The acting was pretty bad but I think a lot of that was was mostly the dialogue and director and confused style. One scene was like the old 70's Italian westerns but dialed up a few notches on the absurdity aspect ratio. Actually laughed out loud at that one and chuckling about it as i type this.

That being said, the fighting scenes were pretty good, which is what I watch a Scott Adkins movie for, but the plot armor during the gunfights was absurd and took a lot away from the movie.

Russell SReviewed in the United States on October 12, 2017
3.0 out of 5 stars
Disappointing. I say that as a devout Scott Adkins fan.
Verified purchase
After rescuing his kidnapped niece from a powerful drug cartel, Colton MacReady (Scott Adkins) begins a relentless fight to save his family. The cartel has descended upon his secluded ranch with a thirst for revenge. I am a total fan-boy when Scott Adkins, I know he can really act and not just punch people. So having said that and I am hoping that this acting was due to the director's wishes. He was so stale and wooden. Then next point about Scott is that I love how he fights and in this everyone was shooting and never hitting anyone. He and his Niece and sister in law are stuck in a farm house with Mexican Cartel crooks laying siege to the house ,oh, there is the requisite corrupt sheriff too, All the shooting by all involved was annoying at best. What a shame is that it could have been better than only okay but didn't cut it.
6 people found this helpful

BalgarFungReviewed in the United States on April 14, 2021
3.0 out of 5 stars
This is a "B" Movie
Verified purchase
This had the potential to be a good movie but lost that with some bad choices in production and writing. Example: they have the cartel coming after them and there is no sense of urgency and they instead decide to have a family group argument. The two women are running from the cartel, so they do the cheap B movie thing, they run back into where they should be running away. The military character gests in a gun battle and shoots randomly burning up ammo, opposite to training. In fights when there are guns and ammo all thru the house from other dead cartel, he resorts to fist fights and knife fights. In short, the fights were filler otherwise the movie would have been 30 minutes shorter.

NanuqReviewed in the United States on June 5, 2020
3.0 out of 5 stars
A trained solider constantly misses when firing a gun.
Verified purchase
Like many I love Scott's films, I'm a huge fan and on the action pact side this movie was full of it from start to finish. What I didn't like was the blatant disregard for his skill using a gun. More bullets flew than any hit and that's disappointing. Knowing Cole (Scotts character) was a highly decorated solider who also gets rid of the bad in the world, I was expecting him not to miss so many times when firing a gun. It was, in my opinion, highly unrealistic. Not to leave out all the bullets flying towards Cole throughout most of the film, it was highly improbable that they'd all miss. In the end it was like the writer and director got together to make a film based on everyone having guns and no one knowing how to aim - including a highly decorated solider and the cartel - they just wanted to have a 2 hour long shoot out. It actually took away from the film.

WALTReviewed in the United States on May 18, 2021
5.0 out of 5 stars
WHAT IS NOT TO LIKE IN A SCOTT ADKINS FILM
Verified purchase
THIS IS ONE OF SCOTT ADKIN’S BEST FILMS. HE IS ACTUALLY A RED AND OR WHITE BELT, WHICH IS THE HIGHEST THAT CAN BE AWARDED TO A CAUCASIAN . ONLY ASIANS POSSESS ANY HIGHER DEGREE. HIS MOST FAMOUS AND BEST FILM IS NINJA, HIS FIRST.
IN THIS MOVIE, THE ACTION IS NON ✋ STOP. HE HAS RESCUED A RELATIVE FROM A POWERFUL CARTEL, NEAR MEXICO, AND BECAUSE THE HEAD OF THE CARTEL IS BEING SO VAIN, HE, HIMSELF, WITH HIS MEN , COME AFTER SCOTT. THE LAW COMES TO ASSIST ADKINS, BUT AGAINST A CARTEL. YOU WILL NEED TO SEE IT. THE FILM IS EXCELLENT, IGNORE REVIEWS.THEY ALL CONTAIN
SPOILERS.
See all reviews
Back to top
Get to Know Us
Make Money with Us
Amazon Payment Products
Let Us Help You
EnglishChoose a language for shopping. United StatesChoose a country/region for shopping.
© 1996-2022, Amazon.com, Inc. or its affiliates