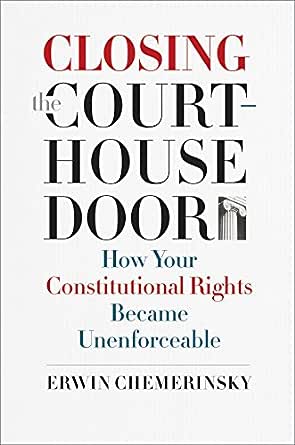 Flip to back Flip to front
Audible Sample Playing... Paused   You are listening to a sample of the Audible narration for this Kindle book.
Learn more
ISBN-13: 978-0300211580
ISBN-10: 0300211589
Why is ISBN important?
ISBN
This bar-code number lets you verify that you're getting exactly the right version or edition of a book. The 13-digit and 10-digit formats both work.

The Supreme Court’s decisions on constitutional rights are well known and much talked about. But individuals who want to defend those rights need something else as well: access to courts that can rule on their complaints. And on matters of access, the Court’s record over the past generation has been almost uniformly hostile to the enforcement of individual citizens’ constitutional rights. The Court has restricted who has standing to sue, expanded the immunity of governments and government workers, limited the kinds of cases the federal courts can hear, and restricted the right of habeas corpus. Closing the Courthouse Door, by the distinguished legal scholar Erwin Chemerinsky, is the first book to show the effect of these decisions: taken together, they add up to a growing limitation on citizens’ ability to defend their rights under the Constitution. Using many stories of people whose rights have been trampled yet who had no legal recourse, Chemerinsky argues that enforcing the Constitution should be the federal courts’ primary purpose, and they should not be barred from considering any constitutional question.
Read more

Erwin Chemerinsky is the founding Dean and Distinguished Professor of Law and Raymond Pryke Professor of First Amendment Law at the University of California, Irvine School of Law, with a joint appointment in Political Science.
--This text refers to the hardcover edition.

"Documents the hostility of the Rehnquist and Roberts courts to the enforcement of citizens’ constitutional rights. . . . Clear, cogent, passionate and persuasive. . . . Awash in examples of disturbing decisions of the Supreme Court."—Glenn C. Altschuler, Huffington Post

"Powerful and impassioned . . . anything but dry reading. Its cogent analysis is enhanced by practical steps for enabling federal courts to again truly enforce the U.S. Constitution."—Publishers Weekly

"Chemerinsky shows how judicial deference undercuts democracy in significant ways. . . . This book is the strongest argument I have seen in favor of judicial power."—Kent Greenfield, author of The Myth of Choice

"Few principles are more basic to constitutional law than the notion that if justice is to have meaning, it must be equally available to all. Yet as Erwin Chemerinsky shows in this compelling and searing indictment, the Supreme Court has erected barrier after barrier to ordinary citizens who seek nothing more than their day in court. This is a must-read for all who wonder why the promise of equal justice under law has been so severely eroded."—David Cole, Georgetown Law, author of Engines of Liberty: The Power of Citizen Activists to Make Constitutional Law

"In this book, Erwin Chemerinsky has eloquently and persuasively articulated his insightful vision of the unique role of the federal courts in our political system. All Americans—especially those sitting on the federal bench—should take heed."—Martin  Redish, Louis and Harriet Ancel Professor of Law and Public Policy, Northwestern Pritzker School of Law

"A masterful exposition of how the federal courts are using abstruse and unfounded procedural doctrines, from abstention to standing, to foul away our rights. Not for lawyers only!"—Susan Herman, President, American Civil Liberties Union 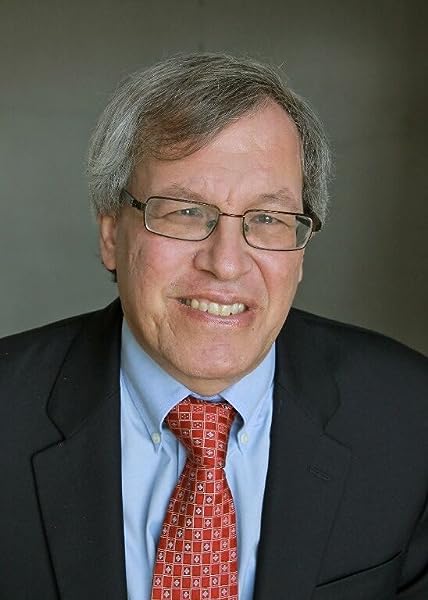 Erwin Chemerinsky is the Dean and Jesse H. Choper Distinguished Professor of Law at the University of California, Berkeley School of Law. Prior to assuming this position he was the founding dean of the University of California, Irvine School of Law, and a professor at Duke Law School, University of Southern California Law School, and DePaul Law School. He is the author of 12 books and over 250 law review articles. He is a contributing writer for the Opinion section of the Los Angeles Times, and writes regular columns for the Sacramento Bee, the ABA Journal and the Daily Journal, and frequent op-eds in newspapers across the country. He frequently argues appellate cases, including in the United States Supreme Court.

In 2016, he was named a fellow of the American Academy of Arts and Sciences. In 2017, National Jurist magazine again named Dean Chemerinsky as the most influential person in legal education in the United States. In January 2021, he was named President-elect of the Association of American Law Schools.

4.2 out of 5 stars
4.2 out of 5
17 global ratings
How are ratings calculated?
To calculate the overall star rating and percentage breakdown by star, we don’t use a simple average. Instead, our system considers things like how recent a review is and if the reviewer bought the item on Amazon. It also analyzes reviews to verify trustworthiness.
Top reviews

Unhappy Customer
5.0 out of 5 stars An Eye Opener - We are Loosing Constitutional Rights
Reviewed in the United States on October 3, 2017
Verified Purchase
Chemerinsky points out the ever decreasing protection against state infringement of our Constitutional rights. It is a real eye opener and quite different than what we were taught in school.
Read more
Helpful
Report abuse

Michael H. Agranoff
2.0 out of 5 stars Promising, but a Major Disappointment
Reviewed in the United States on November 9, 2017
Verified Purchase
A major, major disappointment.

Prof. Chemerinsky told me that he was writing a book against sovereign immunity, which is a thoroughly-outmoded concept in the modern world, and repugnant to the spirit of the Constitution. I looked forward to it.

The result was this book. Like a standard political polemic, he takes the worst cases and generalizes them into recommendations. The book starts with the military. The author fails to understand that civil law would totally undermine military discipline and destroy our national defense. His case examples, while genuinely horrendous, do not justify abolishing the system. The polemics continue in other areas.

Absolute immunity is required for judicial and certain executive actions. It is nothing but a scam for other actions, allowing the government to get away with murder. This is what the author should have concentrated on, rather than writing pipe-dream ideas that sound good, but whose consequences are worse than the problems they purport to solve.

When you are a defense lawyer, as I am, you see the consequences of qualified immunity every day. We need a real book to expose them. I wish I had the energy to do so. I thought the author did, but he was too busy writing a leftist polemic.
Read more
4 people found this helpful
Helpful
Report abuse

Ja€ekZ€N
5.0 out of 5 stars A must read if you are or going to be dealing in the justice sys Court Lawyer Judges an a unfair bias system not in our favor.
Reviewed in the United States on June 11, 2018
Verified Purchase
A must read. Simply the best court house experience book on how basic rights are being trampled on and how courts are processing people through them.
Read more
Helpful
Report abuse

Dan in TennesseeTop Contributor: Star Trek
4.0 out of 5 stars For nonlawyers and lawyers alike, interested in expanding civil rights and access to Federal courts.
Reviewed in the United States on July 5, 2017
For those interested in access to the Federal Courts and the forward movement of Civil Rights in the United States this is a must read for nonlawyers and lawyers alike. For those who graduated from law school before 2009 and are working in state courts (or out of court altogether), Chapter 6 is especially important regarding new changes to the pleading requirements. Really a revolution has occurred underneath our noses while no one was looking -and all Americans need to know about this. I'm going to save you an exhaustive detailed summary of the book. Chemerinsky discusses many of the narrowing challenges that he discussed in an earlier work "The Case Against the Supreme Court." I have to say that I found his section on Sovereign Immunity to be the least persuasive of this book. On the one hand, he tries to make the case that a lot of changes have come about in just the last 40 years that make access to the Federal Courts increasingly difficult, however; Sovereign Immunity has been around since the founding of the Republic. It's not a new thing. Additionally, in my view, he levels criticisms against State Supreme Courts and State Appellate Courts that are just, well, hyperbole. He comes out on the side of those who believe that State Courts are unwilling to enforce Federal Constitutional rights.
One place I felt the book was particularly strong was where he tackles Article III textualists' arguments head on: most conservative justices make rulings based upon judicial bases that just do not exist in the Constitution (such as Sovereign Immunity). The folks who really need to read this book are our Federal legislators. Overall, a really well-researched and thought provoking read.
Read more
Helpful
Report abuse

Adam S.
5.0 out of 5 stars Necessary for both law students and lay people
Reviewed in the United States on August 18, 2017
To those interested because they are federal courts professors, I would highly recommend assigning this book in conjunction with a standard casebook. This book provides an excellent critique (and plain spoken explanation) of federal jurisprudence that would allow students to see the cases in context, both in terms of legal approaches and how the doctrines play out in real cases in the lower courts.

But this book should also be read by non-lawyers. It is probably the best way for a citizen to learn how his/her judiciary works. Because Dean Chemerinsky is such an excellent writer, it is an easy read that makes the law understandable (and compelling!). The first chapter on the role of the federal courts is a must-read considering the current attacks on the judiciary.

To those dismissing this book out-of-hand because it is "liberal," in actuality, it is not very ideological. And considering that precedent in the federal courts area skews right wing, a conservative should be interested in reading this to understand a counter-argument. But at bottom, Dean Chemerinsky's arguments are based in law and our nation's history far more than others (see Randy Barnett), and consequently the book is not built around an ideology.
Read more
Helpful
Report abuse

Sandy Myers
5.0 out of 5 stars I highly recommend this book
Reviewed in the United States on January 10, 2017
I highly recommend this book. Dean Chemerinsky adroitly shows how a series of U.S. Supreme Court rulings have closed the door on many litigants. Chemerinsky has a gift for explaining complex constitutional concepts in a clear, easy-to-understand format.
Read more
4 people found this helpful
Helpful
Report abuse
See all reviews