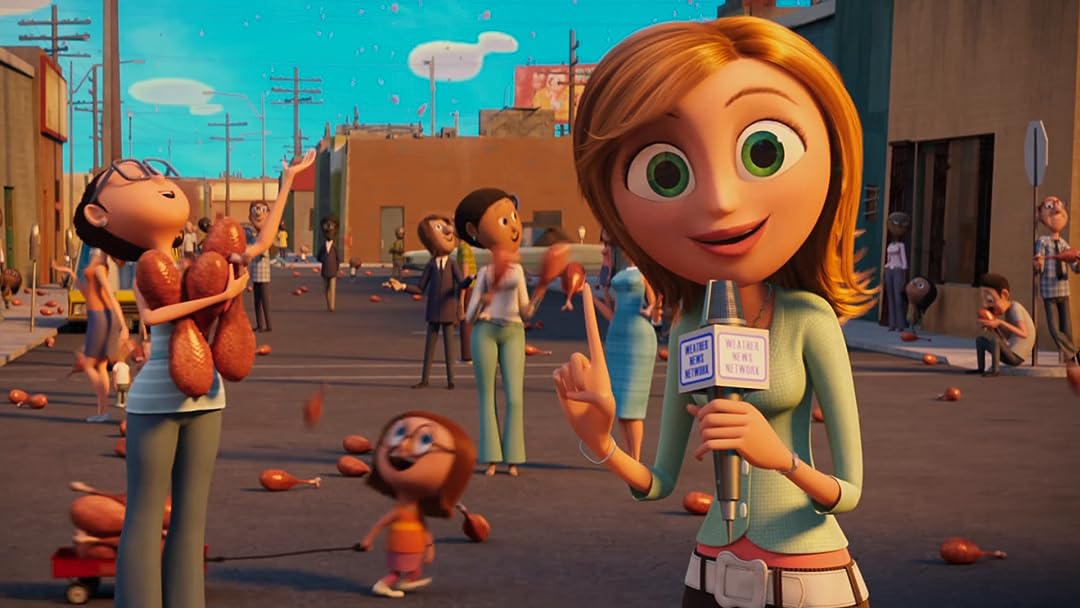 Cloudy With A Chance Of Meatballs

(6,396)
6.91 h 29 min2009X-RayPG
Get ready for an exciting serving of endless fun and world-wide food disaster of epic portions for the entire family!

JuiceBoxReviewed in the United States on December 16, 2020
1.0 out of 5 stars
Would not recommend
Verified purchase
There are several scenes where a grown man is in his underwear, practically nude. There is also a really awkward scene where two people are about to kiss. It is so overdrawn and climaxed. It is uncomfortable and not appropriate for a children's movie. I would not recommend if you are religious and have standards for your children and what they watch.
9 people found this helpful

Linnie RoyReviewed in the United States on January 31, 2017
5.0 out of 5 stars
Amazing. There are no words. Except the ones I provided below.
Verified purchase
I feel it's common courtesy as a reviewer to establish credibility before getting started.

I have seen A Bug's Life upwards of 20 times, wrote my college essay about Finding Nemo and was promptly waitlisted at every Ivy Leauge institution (not denied!), and have extensively researched all YahooAnswer responses to "what's the relationship between Disney & Pixar."

I can say without a doubt that Cloudy With a Chance of Meatballs is the best animated movie of all time. It will meet and exceed all your expectations of plot complexity and subtle humor. Understanding this quiet interjection of ingenious comedy will absolutely reaffirm your opinion of yourself as a wildly perceptive audience member.

Like walking out of a restaurant so satisfied, I envy your position as a fresh customer about to devour the beauty that is this film.

Henry ComptonReviewed in the United States on March 8, 2021
5.0 out of 5 stars
Contains both the 3D and the Standard BluRay Movies.
Verified purchase
I wish the description had said that the one disk has both versions of the movie. I bought the 3D to use with my VR headset and also bought the standard Bluray because I didn't know this also had the regular movie on there. Sigh, just a couple of words saying the one disk has both versions would have saved me from buying the flat version.

Oh well I have two copies of the same movie now.
3 people found this helpful

"D"Reviewed in the United States on January 27, 2021
2.0 out of 5 stars
No digital code and read my damn reviews!!!
Verified purchase
Once again a new movie without a digital code. I really depend on these codes being a traveler on business. And it really pisses me off when I open the case and there’s no code. Especially when it’s not specified!!! Can I exchange it for one with a digital code insert? Or even get it free? Cut me some kind of a break? Please!?! And you guys suck at reading my reviews dammit!!!!
3 people found this helpful

Kendra MichaelReviewed in the United States on November 1, 2013
5.0 out of 5 stars
It grows on you
Verified purchase
I like animated films, but I wasn't compelled to see this one in the theatre. I thought it would be like most animated films with some boring, trite story line with a half hazard attempt at some moral message that would fly over the heads of its target audience. I watched this movie for the first time when it aired on Showtime. The movie provoked a few chuckles. I watched it again and again during it's stint on Showtime and I realized this movie got more hilarious the more I watched it. I grew to love the strange brand of comedy and odd characters. There were little jokes here and their that kept me watching. Also who can pass up a movie that gives you a scene where there is a runway made of bacon?! Even the credits made me laugh when they show what I assume to be London get the 'rainbow and sunshine' treatment. The giant food is cleaned up, but the city is pretty much gray and dreary like it was before. Not sure why they were picking on London, but it made me laugh. Lastly, great soundtrack!! It had a very 'high adventure' feel to it.
5 people found this helpful

Dean D.Reviewed in the United States on May 17, 2013
3.0 out of 5 stars
OK Movie
Verified purchase
This is an OK movie and my kids like it. It has its funny moments but they are honestly a little too few and far between. And here are the things that I thought weren't so great about it:

- It's incredibly heavy-handed in its message, which is "be true to yourself" with a little bit of "don't over-indulge" mixed in. Not a horrible message, but it is ridiculous how obvious it is in trying to influence kids that watch it.
- The characters are all over-used stereotypes you have seen a thousand times in other movies.
- There are many sections that are so cheesy I was thinking "really, guys?" as I watched them. I don't want to be too specific due to possible spoilers, but there are some pretty cringe-worthy scenes.

At any rate, this movie is worth watching. It entertained my boys and I. But if you watch it you should keep in mind that it isn't even in the same league as, say, Up.
3 people found this helpful

Anthony SpearsReviewed in the United States on January 10, 2010
5.0 out of 5 stars
Stupidly awesome and a total original.
Verified purchase
Cloudy with a Chance of Meatballs is just a hilarious movie. I've watched this movie several times, and each time I watch it, there is something new and funny that I notice.

CWACOM is about an aspiring inventor, Flint Lockwood (Bill Hader), and his attempts to live up to the legacies of the greatest inventors in history. Flint is a grown-up child whose eccentric behavior is only bested by his enthusiasm to create the greatest invention mankind has ever known.

So far, his inventions have only been notorious for ending in disaster -- either personally (the spray-on shoes he applied in class, only to find out they would not come off), or for the entire town (the ratbirds that escaped and bred at an alarming rate).

His pursuit of this legacy is stymied by Earl Deveraux (Mr. T), a local cop who has his eye on Flint, and is half-superhero; and his Father, Tim (James Caan), a Sardine Bait & Tackle shop owner who is losing faith in his son's ability to invent anything meaningful, and wants him to work in the tackle shop. Tim is a very strong character, one of the funniest, and he does it without trying (he delivers some of the funniest "lines" in the movie without uttering a word.)

For his latest invention, Flint is working on the "Flint Lockwood Diatonic Super Mutating Dynamic Food Replicator," or FLDSMDFR for short (pronounced FLI-dis-m'duh-fur). Once the FLDSMDFR works, water will go in the top, and the food of your choice will come out at the bottom. Flint just needs a little more power, and the town will no longer be stuck eating the sardines that the world recently declared to be "super gross."

Cloudy does not have a single dull moment. If you blink, you might miss one of the most hilarous parts of the movie, but there are so many of those instances that it's hard to say when that would be. It's chock-full of sight gags, wacky sound effects, stupidly great jokes & puns, and Flint Lockwood's nerdy attempts to impress weathergirl Sam Sparks (Anna Faris) with his intelligence, humor, or his claim to have an allergy in common with her.

The animation can only be described as Ren & Stimpy meets Warner Brothers, meets Muppets. You also have the hilarious Looney Tunes-esque sound effects, intentionally "lame" humor, ironic use of disaster movie cliche's (weather anchor Patrick (Al Roker) even observes that the storm is "following an unusual pattern of hitting all of the worlds major landmarks first, and then spreading across the rest of the globe,") and an awesome soundtrack by Devo's Mark Mothersbaugh to give it the 80's retro-futuristic tone. It has become one of my favorite movies of all time. It's purely entertaining from start to finish.
4 people found this helpful

Dag U.Reviewed in the United States on August 23, 2021
5.0 out of 5 stars
I think this is the best movie of all times.
Verified purchase
I am happy for everybody having been involved in making that movie. So many positive things going for it. The second movie I thought was a little racist. I mean, why would the South American doctor just leave a cow giving birth, that really doesn't seem like his character from the first movie.

Yes, I would rate this movie higher than Star Wars A New Hope, and Alien. :) Ofc, they are different genres.
See all reviews
Back to top
Get to Know Us
Make Money with Us
Amazon Payment Products
Let Us Help You
EnglishChoose a language for shopping. United StatesChoose a country/region for shopping.
© 1996-2022, Amazon.com, Inc. or its affiliates