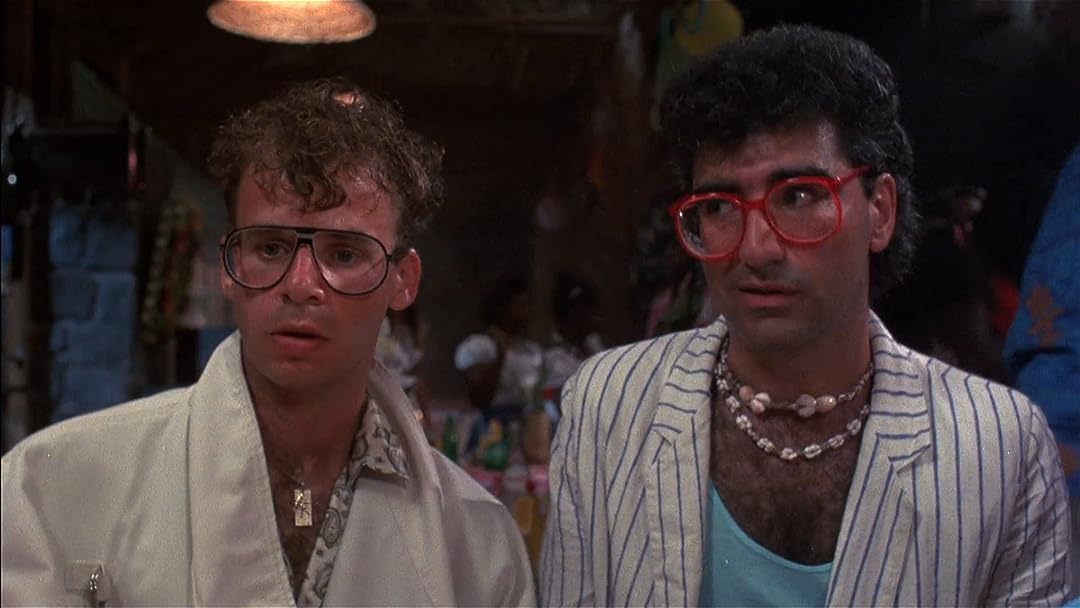 AugustineReviewed in the United States on September 1, 2021
2.0 out of 5 stars
Trite and not very funny.
Verified purchase
There is just so much not to like about this movie from the "cool " Robin Williams character who is immediately accepted by the locals to the not too hip and ridiculously "square" characters that populate the resort that the comedic moments are predictable and trite. Toss in the obligatory evil white businessman who is trying to cheat the virtuous black inhabitants out of their beautiful island with the help of a local stooge politician and the formula plays out with predictable results. The two actually funny lines in the movie are not worth sitting through the rest.

J. Conrad StambaughReviewed in the United States on March 11, 2018
4.0 out of 5 stars
What are the other two worlds?
Verified purchase
A truly funny little film that never got it's due. I think Harold Ramis was very smart as it seems he gave Robin Williams free reign to improvise all he wanted. Robin does his usual genius job of taking what could be stagnant dialogue a turning it into comedy gold. Jimmy Cliff does a very credible job as an actor and it kinda makes me sad he never did more screen work as he had genuine presence and even held his own comically with Robin. If your looking for a kick-back comedy or maybe just wanna spend a couple of hours laughin' then click buy, you won't regret your trip to Club Paradise :)
4 people found this helpful

cornbreadthedogReviewed in the United States on November 17, 2013
4.0 out of 5 stars
CLUB PARADISE HAS GOT A LOT OF LAUGHS GOING FOR IT! I'M GLAD THAT I CHECKED IT OUT!
Verified purchase
One of the coolest things about the internet, that I'm continually discovering, is that you get the chance to check out movies that you might have missed out on or maybe even passed over the first time around.

Barely do I even remember the trailer of Club Paradise back in 1986, but because of Robin Williams and Adolph Cesar (who gave a truly outstanding and forever hauntingly Oscar worthy performance in A SOLDIER'S STORY), I bought this movie off of Amazon.com for like under 8 bucks or so with shipping.

I must say that this is the most enjoyable 8 bucks I've spent in a while...(and this is coming from a guy whose hemorrhaged thousands of dollars on child support payments)!

However, I did noticed that Robin Williams is kind of laid back this time around and has a soft kind of subtle charm in this movie but it still doesn't stop Williams from delivering some of the funniest one-liners that I've ever heard. What's really special, for me, about this film is that it's one of the last performances from the undeniably and extremely talented, Mr. Adolph Cesar(Mr. Gundy), who sadly passed away before this funny film even premiered in the theaters.

Without a doubt, though, Club Paradise has got a bunch of laugh out loud moments going for it! Sure, it could've been better and was a little slow in a few parts while the next joke or visual gag was making it's way around the corner of the silver screen, but I'll keep pulling this one out from my DVD collection from time to time because I love laughter and I'm a still a little kid at heart from the 1980's.

Oh, yeah!..Club Paradise most definitely has earned it's place in my collection of DVD movies!...

L. T.Reviewed in the United States on March 6, 2021
5.0 out of 5 stars
One of my favorites
Verified purchase
I really, really love this movie. Of course starring beloved Robin, most of the amazing star cast from SC TV, Peter O'Toole, Adolph Cesar, Twiggy and Jimmy Cliff, to name a few. Then to top it off it's directed by Harold Ramis. I smile when I think of the great lines from this movie. Even though it's a product of the eighties it still holds up well over time. Good comedy is timeless.

Astral PixieReviewed in the United States on December 23, 2017
4.0 out of 5 stars
Fun 80s romp
Verified purchase
This movie has one terrific line, "You don't save a marriage without air conditioning"....how true.
In the old days, this movie used to play on cable on the time.
So, you'd watch bits and pieces, but not usually from start to finish.
I like Rick Moranis & Eugene Levy and Andrea Martin.
Though the best part of the movies is the Kinks' Ape Man playing over the opening credits, and
of course, the ganja, man ;)
2 people found this helpful

MaraReviewed in the United States on August 16, 2007
5.0 out of 5 stars
A real taste of island life.
Verified purchase
This movie is a must for people like my husband and myself. We experienced life "in the islands." We lived on a small island in Caribbean in the 80's and loved the life...we stayed 8 years and returned for 2 more years in 2004 ... like scenes in the movie we suffered "upper class British types and "let's save the world and the natives" types like Jack Moniker (Robin Williams; tourist types like Carol White (Andrea Martin);heard and used phrases like "cool vibes", had daily bouts with inconsistent water pressure; toilets backing up; met the Prime Minister who was also the Finance Minister, Minister of Tourism and Treasurer! We learned to relax and appreciate that "soon come" meant anything from minutes to hours to days, and that there was nothing that we could do to change it!
The cast and "crew" were exemplary in their depiction of over the top patrons of a "Third World" tourist resort. Like Jack I have often wondered where the other two worlds were????? The two Barry's were a hoot ..who didn't meet guys like these in bars in the 80's???? Andrea Martin and Brian Doyle Murray were a fun bunch. Peter O'Toole's portrayal of a tired washed up aristocrat who could live nowhere else but on "the islands" was so accurate.
People thinking of buying this DVD should bear in mind the fact that this is life as it was in the islands in the 80's when anyone with money could start a resort and did! We purchased a DVD version of the movie as our video copy was showing signs of age and repeated viewing. When we want a jolt of "reality" and a good belly laugh we watch Club Paradise. It should come with a warning...only for those with island experience!!!!
3 people found this helpful

MemeReviewed in the United States on June 10, 2022
5.0 out of 5 stars
Funny Classic Movie
Verified purchase
My son and I remembered watching this back in the 80’s and just had to see it again. Loved Robin Williams!
See all reviews
Back to top
Get to Know Us
Make Money with Us
Amazon Payment Products
Let Us Help You
EnglishChoose a language for shopping. United StatesChoose a country/region for shopping.
© 1996-2022, Amazon.com, Inc. or its affiliates