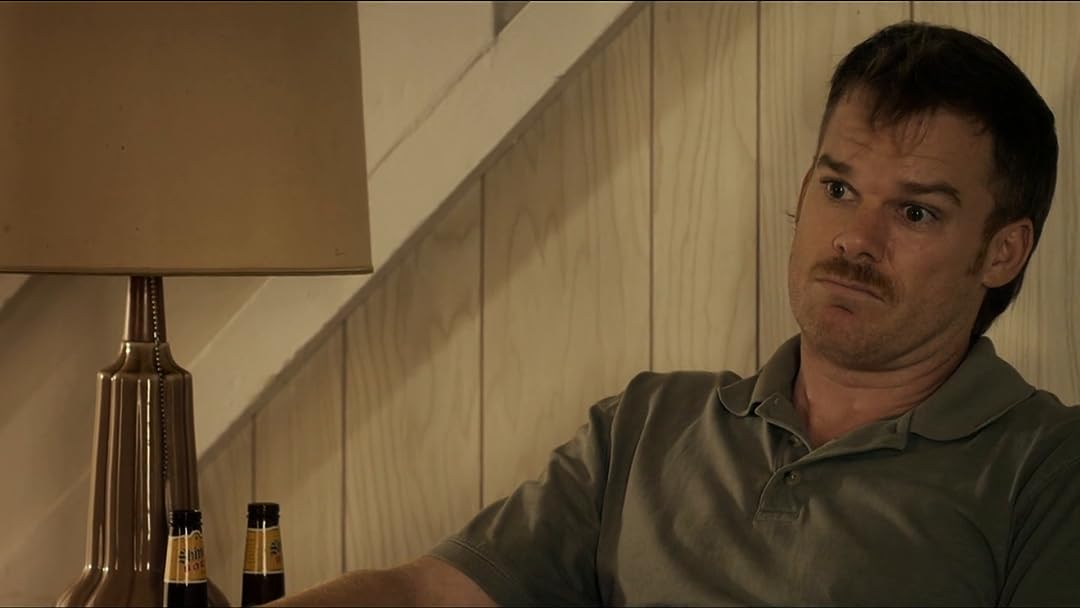 ProfessorReviewed in the United States on October 24, 2019
3.0 out of 5 stars
Typical genre flick, but Don Johnson is great
Verified purchase
2 1/2 stars because of Don Johnson' performance.

"Cold in July" is yet another Texas noir genre fick, slightly evocative of the Coen Brothers' "Blood Simple," but unlike that great classic, it takes itself too seriously and winds up with the requisite Jim Mackie gore fest.

The film is set in 1980's. Richard Dane (Michael C. Hall), a middle class family man who owns a picture framing shop, is awakened by his wife (Vinessa Shaw) late one night because she hears an intruder in the house. Nervously pulling his father's old gun from a closet, he confronts the intruder and shoots him. The cops exonerate him because he was defending his family.

But he is not exonerated by a man named Russell (Sam Shepard), the father of the intruder, who threatens Dane, stalks his kid, and breaks into his house.

That's enough of a setup for a typical thriller, but the film takes a major left turn when Dane discovers that the man he shot was not Russell's son. He and Russell pair up with an aging cowboy detective (Don Johnson), and the three go on a quest for justice. I won't get into spoilers; let's just say that nothing is as it originally seems, and things get much nastier.

This is by no means a great film. It descends into cliche repeatedly, and the finale is insanely violent, typical of director Jim Mackie's work. But allow me to praise Don Johnson. Honestly, I only know him as the pastel suit-wearing young cop in "Miami Vice" back in the 80's. When this film was made in 2014 , Johnson was 65, and what a surprise: He's great!. He's grizzled and stoic. He wears a cowboy hat, and he drives a red Cadillac with bull horns on the grill. He owns a hog farm and cooks bacon for breakfast. He pulls off his role with aplomb. He is the single best reason to to watch this film.

Hall and Shepard are also impressive, but Johnson is the payoff in this film, without question.

If you're a Mackie fan because you love blood and gore, enjoy the climax, you sicko. If you're an aficionado of great acting, enjoy Don Johnson.

Cheryl StoutReviewed in the United States on November 24, 2014
5.0 out of 5 stars
Great movie adaptation of a Joe Lansdale novel
Verified purchase
Joe Lansdale is one of my favorite authors and this movie, taking place in 1989, is based on the book of the same name, published in 1989.

First of all, it felt like being back in 1989 in the movie, from the old Mercury station wagon with the "wood" panels on the side to the hairstyles and clothes to the old cell phone and typewriter. Great job with the settings.

Michael C. Hall playing husband/father Richard Dane, did a super job, albeit far different from his DEXTER role, playing a protective, diffident man. He kills a man who breaks into his house.

And then...
Sam Shepard plays father Ben Russel, father (supposedly) of the man who was killed. Recently out of prison, he starts terrorizing Dane and his family.

Then, because of unforeseen circumstances, everything changes. Don Johnson, playing the fantastic role of private detective Jim Bob Luke, comes into the picture and the action really picks up.

Memorable characters, a convoluted storyline, believable settings - all pay homage to one of Lansdale's classic novels.

Of interest...
Joe Lansdale has a cameo in the movie. And Joe's daughter, Kasey Lansdale, a country singer, wrote and performed some of the music soundtrack.
9 people found this helpful

LsTwinReviewed in the United States on November 23, 2014
3.0 out of 5 stars
Well Acted but Implausible
Verified purchase
Good cast, but the story was not gripping enough to keep me from googling "Don Johnson images" or "Wyatt Russell images" or "Sam Shepard recent arrests." I mean, I kept the movie paused in the background, and went back to it/finished it, but obviously if the story were more plausible and tautly told I would have kept watching from beginning to end without inventing frivolous distractions for myself. But aside from finding some of the story hard to believe and some of the plot lines being unresolved, it was very well acted, and fun to see a movie that harkens back to when we had to use land-lines and answering machines--devices that really lend themselves to the art of suspenseful story telling. I did appreciate the opening scene (spoiler alert!) in which Michael C. Hall so nervously and shakily handles a gun. Every single television show and movie leads us to believe that everyone is cool-as-a-cucumber when using a fire arm. The reality must be sweat and shakes and adrenaline and fear, and Michael C. Hall had me feeling all of this. Don Johnson was wonderful as was Sam Shepard, and Wyatt Russell is incredibly compelling--he could have just skated by on just being gorgeous, but he brought a depth and creepiness--and ultimately pathos--to his few moments on screen. Not easily done. I hope he lands more roles.
6 people found this helpful

LReviewed in the United States on November 19, 2014
4.0 out of 5 stars
Cold fathers and even colder sons...
Verified purchase
In my opinion some people who rated this film five stars or more, are hyping this film too much. Four stars is the most it deserves, maybe even less. The plot is a little to convulsive and moves on too quick, and the characters and their encounters are somewhat unrealistic. For instance, in real life the character played by Michael C. Hall would not volunteer to do what he did. Ordinary folks, especially with families don't do such things. This movie is sort of in Tarantino's ballpark...or I might be wrong. What is wroth mentioning is the music: a country/blues with electronic vibe similar to the now cult soundtrack of Drive (2011). Cold July (2014) is a movie with a plot that can be compared to films such as: 8MM (1999), Blue Ruin (2013), and No Country for Old Men (2007). The ending is quick, gritty, and does not really deliver. I think it could have been done better. The moral of the story is: raise your kids well and be there for them...otherwise
6 people found this helpful

Electric EclecticReviewed in the United States on March 28, 2015
5.0 out of 5 stars
Good film
Verified purchase
This is probably really a 4 star movie but I am going to be a little biased because of the low ratings. I typically have not liked Joe Lansdale's books but this is good little crime thriller set in Texas in 80's. Michael Hall, Sam Shepard, and Don Johnson all do a good job. Hall's character doesn't show a wide range of emotion. None of the actors do but two are hard men and the third learns to be hard. There are a few scenes that are hard to watch which involving the filming of a video (some readers may recall Hardcore from 1979).

Much better than the average explosion filled Hollywood movies with no plot. Anyway, this is based on a Joe Lansdale book and I think it turned out well. I have always criticized Lansdale not for his plots but because all of his characters (rich, poor, black, white, educated, illiterate) speak with the same voice. His plots are usually decent. But that is a different issue.

Jim BorgerReviewed in the United States on November 3, 2014
4.0 out of 5 stars
A little humor mixed in.
Verified purchase
I like the actors more than the story, in which an average family man, Hall, kills an intruder that broke into his house one night. Turns out the burglar has a father, Shepard, with a long history of criminal activity that has just been released from prison. He is quite upset with the man that killed his son and makes threats. So far it's business as usual but then the plot twists begin. Nothing is as it seems. The father brings in a friend, Johnson, that is a private detective and they, along with the son's killer, unravel a coverup that culminates with a major gun battle in which everybody gets shot. Who survives? The movie is a little slow in places but it's worth it to see the ending. Due to some sex scenes and graphic violence this movie isn't for the kiddies.
4 people found this helpful

Seriously, I was looking forward to finally seeing this movie in a big way and I was not at all disappointed. Highly recommended!
One person found this helpful

GrampyReviewed in the United States on November 7, 2014
3.0 out of 5 stars
So Many Possibilities
Verified purchase
There was certainly plenty of action, fine acting, secondary meanings, and plot twists, but all at the expense of a consistent plot line. Beneath it all we have the story of a man who must confront his own complacency and fears--as we all do--but this was rather overshadowed by a need for virtue--albeit tainted--and a war against the "Big Other" (arrant bad folk and suspect good guys). With all of the double meanings, well-played coincidences, and symbolism, I suspect that I am just being picky if I think that there was slightly too much contrivance to reach that goal. Still, I am also always troubled by loose ends, of which there were several.
3 people found this helpful
See all reviews
Back to top
Get to Know Us
Make Money with Us
Amazon Payment Products
Let Us Help You
EnglishChoose a language for shopping. United StatesChoose a country/region for shopping.
© 1996-2022, Amazon.com, Inc. or its affiliates