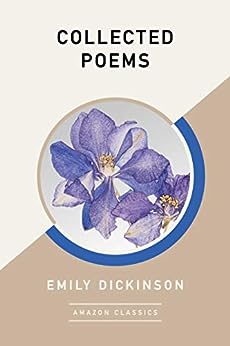 Emily Dickinson (1830–1886) was an American poet who lived her entire life in Amherst, Massachusetts, where her family had deep roots. Her father was a prominent lawyer and politician, and her grandfather was a founder of Amherst College. Emily excelled in secondary school, despite absences due to illness and the trauma of several personal losses. But, after attending Mount Holyoke Female Seminary for less than a year, she returned home and eventually lived in self-imposed seclusion. The author of nearly two thousand poems, she was also a prolific letter writer.

While her work was largely unpublished during her lifetime, hundreds of her poems—written in hand-bound books and hidden away—were discovered and compiled after her death. By the time a full compendium of her work appeared in the mid-1950s, she already had been recognized as a towering figure of American literature.

4.8 out of 5 stars
4.8 out of 5
8 global ratings
How are ratings calculated?
To calculate the overall star rating and percentage breakdown by star, we don’t use a simple average. Instead, our system considers things like how recent a review is and if the reviewer bought the item on Amazon. It also analyzes reviews to verify trustworthiness.
Top reviews

W. Laine
VINE VOICE
4.0 out of 5 stars The Poems Are Best Read by a Woman, & This Reader Is Good
Reviewed in the United States on December 28, 2020
Verified Purchase
I like having the poems read by a woman, because they were written by a woman. This reader is good. I cannot tell for sure, but I don't think that this collection is Dickinson's complete poetry, however.
Read more
One person found this helpful
Helpful
Report abuse