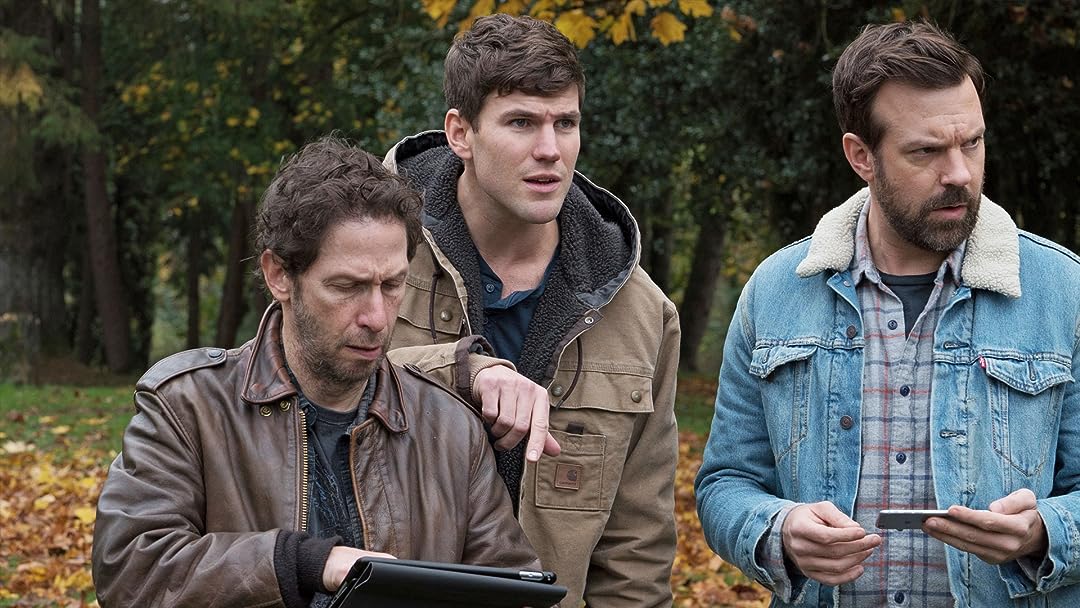 (1,893)
6.21 h 49 min2016R
An out-of-work party girl moves back to her hometown, when she realizes her life has a colossal effect on the fate of the world after a giant creature begins destroying it.

PJReviewed in the United States on January 1, 2020
1.0 out of 5 stars
This is a comedy???
Verified purchase
An out of work alcoholic liar with loose morals get thrown out by her over controlling judgmental boyfriend so, predictably, she runs home to her apparently abandoned parent’s home in the suburbs where she meets up with an at first normal seeming male childhood friend who turns out to be an abusive heavy drinker and bar owner with serious self esteem issues who has apparently been cyberstalking her since grade school.

She lands a plum waitress job at the bar, gets introduced to his two dysfunctional friends and all seems well but, as we suffer through the mundane lives of this group of absolute losers, we learn that these two have an unbreakable psychic link that was forged when the abusive friend stomped her elementary school diorama of Seoul, South Korea in an empty field that they walked past every day on the way to school.

This betrayal affected her strongly, causing lightening to strike her on top of her head (him too, it seems) creating monster alter egos that would appear in...you guessed it...Seoul - but only when he or she visited the empty lot now redeveloped into a playground.

At first it was just all good fun, getting wasted at the local bar then heading to the playground to unleash their inner monsters on the hapless and clueless Koreans. Then our alcoholic heroine has a casual fling with one of the losers and her friend/stalker/monster mate loses it in a jealous rage, threatening to do some real damage unless she hangs around. Naturally he has to punch her around a few times to make sure she understands how serious he is and how attracted he’s become to her sparkling personality.

She’s having none of it though and flies off to Seoul after figuring out that her monster would appear in the playground back home. True to his word he’s there (at 8:05 am...did I forget to mention that 8:05 am was when he stomped the diorama...forever setting the time when the monsters could appear?). He’s drunk and not at the top of his game though and she quickly gets the upper hand, capturing him (in his puny human form), giving him a stern stare and some monster breath before flinging him toward the far horizon.

We leave her in a bar (Korean bar this time) emotionally distraught, black eye and bruised face, asking the barmaid if she’d like to hear an amazing story.

We never find out whether she made it home to the domineering boyfriend or, equally likely, ended up in a South Korean mental institution...and we don’t care!

Grandma 420/710Reviewed in the United States on January 1, 2018
4.0 out of 5 stars
Not A Fun Fantasy Monster Movie.
Verified purchase
I enjoyed the movie although the description is misleading. This is a very dark story about alcoholism, bitterness, and some real dark places inside people. There are monster's but that is not the theme. The monster's mearly represent the inner turmoil and workings of the two main characters. It is a fantasy but like I said it's a very dark fantasy. I enjoyed Anne Hathaways performance and I thought the movie was different in a good way.
28 people found this helpful

Jacob M McNeillReviewed in the United States on July 26, 2018
4.0 out of 5 stars
One of the most original kaiju movies in year... or possibly ever
Verified purchase
It's refreshing to see a gaiju movie that actually has something to *say* beyond just "giant monsters are cool!"

I'll refrain from spoiling the plot too much, but the short synopsis is that Colossal stars Anne Hathaway as an alcoholic returning non-triumphantly to her home town, to be greeted by her old friend of sorts played by Jason Sudeikis, whose interest in Hathaway's character hints at darker undertones. However, after a late-night bender at home, Hathaway's character wakes up to discover a giant monster has been plaguing Korea, and it doesn't take her long to discover that she has a connection to the monster.

This movie warps from a character drama to a monster movie to a comedy, and ultimately to something that combines all of these elements, and... I so very much want to say more about it, but don't want to spoil the truly wonderful insights this film finds with its unique concept.

Anne Hathaway is excellent in the film's title role, but the real standout here is Sudeikis, who manages an impressive balancing act that requires a lot of subtlety and skill to pull off.

If you're a fan of kaiju movies, this should be considered a must-see, as it's an absolutely original take on the genre. But even if that genre doesn't exactly appeal to you, the character drama here is what really sets this apart, and the commentary on alcoholism, abuse, and self-redemption is phenomenal.

Definitely worth a watch.
11 people found this helpful

Dylan HinmanReviewed in the United States on March 19, 2018
5.0 out of 5 stars
Just as good of a movie for entertainment value as it is for deeper themes.
Verified purchase
Many can say this is a fail movie that nobody really saw, but in reality its a wonderful story with an interesting plot and characters that manage to make you care about them and their relationships. But in order to truly appreciate it for what it is you have to read between the lines. its ridiculous and entertaining of course but the premise is built on a recovering alcoholic who's battle with addiction is just as real as the fight between the monster and the robot. Gloria starts the movie as selfish and a danger to herself and others, but as she begins to realize she is the monster (who when on booze makes poor decisions and influences the lives everyone around her) she stops drinking and that's when Oscar becomes the antagonist of the story. Oscar on the surface just seems to be angry that his life isn't the one he imagined. On the more metaphoric side, he is representing hate for one's self which spirals into hate for everyone else. Gloria battles Oscar after she stops drinking. Oscar (which may be part of her that was controlled and supressed before she quit) has to be confronted to help her confront her contempt for herself and destroy it which leads to Oscar's final destruction and the destruction of Gloria's self-loathing.
8 people found this helpful

WilmolherReviewed in the United States on November 10, 2020
1.0 out of 5 stars
Not the movie the trailer suggests
Verified purchase
We love Jason Sudeikis, and try to watch everything he does. And, admittedly, the acting in Colossal is very good, both from him and Anne Hathaway. The problem lies with the makers of this film, who couldn't seem to decide what kind of movie they wanted to create. The trailer says comedy, but, that's not it. The name and cover pic say dystopian monster flick, but that's not it. By the end I thought it was a metaphorical take on highly abusive and violent relationships, but then I read wiki and it turns out that's not it either. In the end what it turned out to be was simply a swing and a miss at everything. Too bad because, as I've said already, the acting was very good. The filmmakers had an opportunity here, but..., hard fail.
3 people found this helpful

RichReviewed in the United States on November 4, 2017
3.0 out of 5 stars
Poltergeist meets Godzilla and Power Rangers *Some Spoilers*
Verified purchase
This movie is good and strange all at the same time. I gave it 3 stars because I thought it was good, but not great either. Gloria (Anne Hathaway) is an out of control party girl who doesn't know what to do with her life, but her boyfriend Tim (Dan Stevens) doesn't like it and dumps her. Gloria has no choice, but to move back home into her parents old house. While moving back home she runs into Oscar, (Jason Sudeikis) an old friend from elementary school. When she moves back home she sees there's a monster in Seoul, South Korea and nobody can take their eyes off the TV. After a few days, Gloria notices that the monster is doing everything she does and gets freaked out. She doesn't know what to do, so, she goes to Oscar's bar that he owns and runs. Oscar and a few guys from the bar come out to this old burial ground where Gloria shows them that the monster does everything she does and freaks them out also. Oscar is intrigued about what's going on and decides to see if he can do the same thing as Gloria. The next day a robot appears and it does everything Oscar does. I'll stop there in case you want to watch this, but you can probably guess where this is going. I would recommend you rent before buying, but it's up to you. I know I spoiled some stuff, but not everything.
3 people found this helpful

KTLReviewed in the United States on May 23, 2021
2.0 out of 5 stars
NOT a Comedy; Turns Very Dark
Verified purchase
I got sucked in by a trailer that marketed this as a comedy, but it was definitely not. Anne Hathaway was very good (no surprise) at both comedic and psychological nuances, so her performance is the only reason I'm not giving this the lowest rating.

But be warned (spoilers here): this is about a woman trying to realize her own worth in the midst of bad relationships with men who are decidedly not good, most of whom are weak in one way or another. The setting happens to be this bizarre monster thing. But that's not the plot. Honestly, the plot is convoluted. This feels like they took too many runs at re-writes and somehow lost their focus on what genre this should be. If the goal was to trick the audience into watching a PSA about abusive relationships, then it was a success.

If you're into watching something dark, go ahead and rent. If you're looking for a true comedy, DO NOT rent this.
One person found this helpful

davidthawaiiReviewed in the United States on July 21, 2021
4.0 out of 5 stars
PG-13. Good, but not quite a family-night flick
Verified purchase
As other reviews have said, this is not a regular kaiju movie. It’s not for the little kiddies, because it does turn a bit dark about 3/4 of the way through; though, it’s probably OK for more mature children. It might actually be a good opportunity to have a semi-serious “what-if” discussion with somewhat older kids about the movie. What if you were responsible for the deaths of possibly hundreds of strangers? How would you feel? Or, what might you do to prevent the deaths of hundreds more?
It’s a well-done movie that was probably not promoted in the best way.
See all reviews
Back to top
Get to Know Us
Make Money with Us
Amazon Payment Products
Let Us Help You
EnglishChoose a language for shopping. United StatesChoose a country/region for shopping.
© 1996-2022, Amazon.com, Inc. or its affiliates