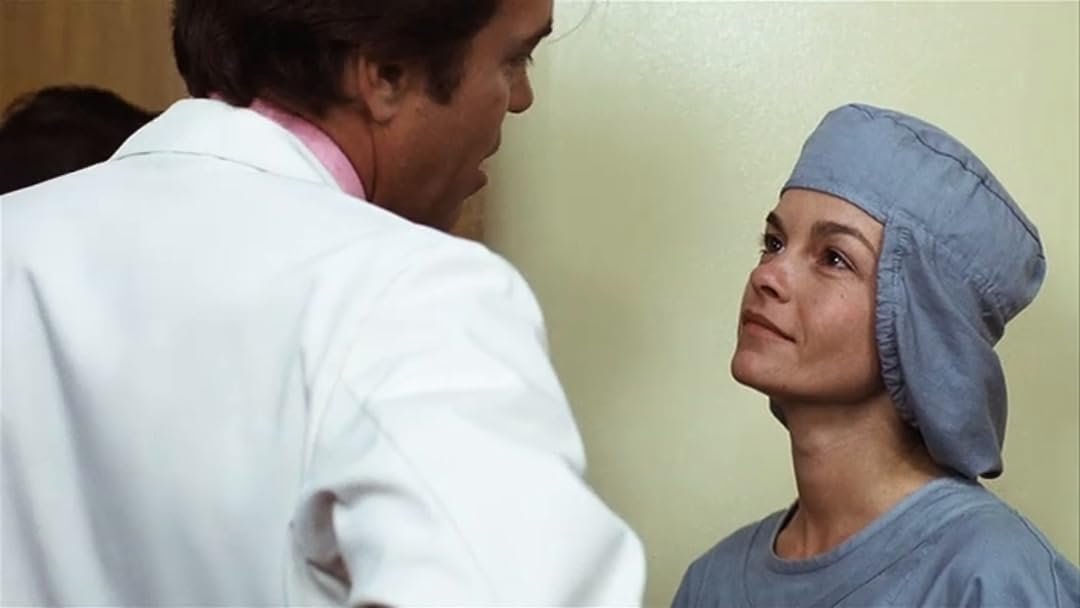 (1,593)
6.91 h 52 min1978X-RayPG
When patients die during routine surgery, a concerned doctor defies her male superiors and uncovers a secret plot by hospital administrators to sell body parts on the black market.

Hilary.."My Two Cents"Reviewed in the United States on November 1, 2019
4.0 out of 5 stars
My two cents review
Verified purchase
I really enjoyed this film. I couldn't believe that I hadn't seen this before or even heard of it. This being written by Michael Crighton, I was intrigued. As a very big Michael Douglas fan and not much knowledge of the rest of the cast I gave it a shot. I was completely entranced the entire film and never got bored or checked the time. This was directed very well and the screenplay was well done. The acting was superb. I'm very happy that I took a chance and bought this...and that's my two cents. Enjoy!
10 people found this helpful

Robert DinsmoorReviewed in the United States on November 28, 2017
5.0 out of 5 stars
The Best Film Adaptation of the Novel
Verified purchase
There was a series made from this novel but it missed so many wonderful scenes that were in this original, directed by Michael Crichton from a novel by Robin Cook. Genevieve Bujold plays a young resident who seeks to figure out what is putting so many patients at a Boston hospital into a coma. Everyone things she's having a psychotic break, but she perseveres and discovers a really insidious plot. In addition to Bujold's excellent performances are great performances by Michael Douglas and Richard Widmark.
16 people found this helpful

TraceyReviewed in the United States on January 19, 2016
5.0 out of 5 stars
Old Thriller but worth the watch
Verified purchase
This is an old thriller but its really a quite lazy Sunday movie to me. I like this flick because it was one of the first movie since Bette Davis that a women was strong and the lead, but not a prostitute (like Jane Fonda in Klute) she was a surgeon with a stong will but very womanly to. Genevieve Bujold was great she was in a man game as a doctor but she was not going to let their sexism make her back down in getting to the truth to what happened to her best friend. I WOULD LOVE TO HAVE THIS CHARACTER AS A FRIEND. THE MEN INCLUDING A VERY YOUNG HANDSOME Michael Douglas was treating her like she was supposed to will to their authority just because she was a women..and she was like no way boys I worked just as hard as you to get here. I loved that it quietly frightening because everyone is afraid of surgery and what if you ended up in a Coma.. Women take for granted that women back in the day had to endure men put downs and disrespectful treatment on the job no matter what job it was. LOOK PRETTY AND PLAY DUMB OR GO COOK SOMETHING was the standard attitude...OH SURE THERE'S STILL SEXISM TODAY BUT NOT AS MUCH OR AT LEAST THEY HIDE IT Better. This movie is and old classic its not my era but I can still appreciate a good story even from 1978
17 people found this helpful

margotReviewed in the United States on December 5, 2021
3.0 out of 5 stars
It's Crichton, and a bit of a stretch
Verified purchase
The script pushes our suspension of disbelief until it's ready to snap. A hospital OR repeatedly leaves its patients in comas, after which the vegetative patients are shipped off to a well guarded facility where they are kept alive on tubes so their bodies can be harvested for...but that would be a spoiler!

'The Hospital,' with George C. Scott, Diana Rigg, Barnard Hughes, and a Paddy Chayefsky script, came out a few years earlier, with a somewhat similar plot arc. It's remarkable how much better it is, using no high-concept trickery or conspiratology. Just a clever, funny, often blackly comedic screenplay, and some engaging actors.

NET 7Reviewed in the United States on July 21, 2021
5.0 out of 5 stars
You Can Trust Your Doctor Always....Right?
Verified purchase
Coma (1978) is without a doubt one of the best films I've ever seen. Imagine you go to the hospital, routine surgery, go under....and DON'T WAKE UP? That's a terrifying prospect. This film isn't a horror film, it's a suspenseful crime thriller that starts off feeling like a drama, sort of like lulling prey, the viewer, into a false sense of security, but as the heroine digs deeper, and deeper into the truth, putting the pieces together and getting closer to terrible conspiracy of why patients going under for routine surgery are coming out brain dead, and soon afterwards fully dead, the danger, the fear, the terror and suspense builds until the climax where you're gritting your teeth, knowing what's about to happen and hoping that it can be stopped in time. I definitely recommend.

Kevin WeathermanReviewed in the United States on July 7, 2020
5.0 out of 5 stars
Shocking and to think it's actually happening now..
Verified purchase
I originally saw this back around the time the movie was released.
Another great story by Michael Crichton (of Jurassic Park fame et al).
Was a pretty shocking idea and great thriller.

And to think as what this movie portrays is actually happening now!
Isaac Asimov:
"Today's science fiction is tomorrow's science fact."

This has been going on in China for a while now and that's a fact.
Don't take my word for it, read available on Amazon:
"Stealth War: How China Took Over While America's Elite Slept"
By: Robert Spalding

M. OlesonReviewed in the United States on August 27, 2012
4.0 out of 5 stars
A bare-bones Blu ray of an excellent hospital thriller
Verified purchase
Director and screenwriter Michael Crichton hits a mark set by Hitchcock in this taut hospital based thriller. Adapted from Robin Cook's novel, Dr. Susan Wheeler (Genevieve Bujold at the top of her game) investigates the mysterious brain dead coma of her best friend (Lois Chiles) who enters the hospital for an early term abortion.

Wheeler, an up-and-coming physician at the Boston hospital is a no nonsense independent woman who is having an affair with Dr. Mark Bellows (Michael Douglas) himself in line for chief resident. Wheeler's investigation leads her to believe that a series of comas involving otherwise healthy men and women, who had routine procedures, may be more than coincidental. Her bosses and Bellows ignore her concerns so Susan must proceed on her own.

Her detective work leads to an institution where the comatose patients are "stored" until natural death arrives. The film ultimately gets a little preachy when the chief of surgery (Richard Widmark) talks about how society shuns life or death decisions and so doctors must do the dirty work. The film has some white knuckle scenes involving Susan as she crawls around air vents and avoids a hired thug out to get her. Watch for an early look at actors Ed Harris, Tom Selleck and Joanna Kerns.

The Blu ray disc comes in 1080p with a 1.78: aspect ratio close to the original. The transfer is limited but look pretty much like the film did upon release. Haters of "grain" may be put off but I believe it looks as it should. The blacks aren't great but again, I think this is about as good as can be. The audio is in mono only, but it is DTS-HD Master Audio. I didn't even notice until I was 10 minutes or so into the movie. It is crystal clear but you might miss the surrounds when the musical score kicks in. There are no "extras" on this disc.
18 people found this helpful

Thomas LittleReviewed in the United States on March 9, 2022
5.0 out of 5 stars
Excellent acting, good script
Verified purchase
Generally good performances and taught script of the late 70s genre of which "The Invasion of the Body Snatchers" has a similarly dystopian angle. And it is not too much of a stretch that organ harvesting has happened as it is highly profitable, especially in the for profit "healthcare" business, but not so extreme as here. I took "organ donor" off my driver's license; there are just too many perverse incentives in 2022.
See all reviews
Back to top
Get to Know Us
Make Money with Us
Amazon Payment Products
Let Us Help You
EnglishChoose a language for shopping. United StatesChoose a country/region for shopping.
© 1996-2022, Amazon.com, Inc. or its affiliates