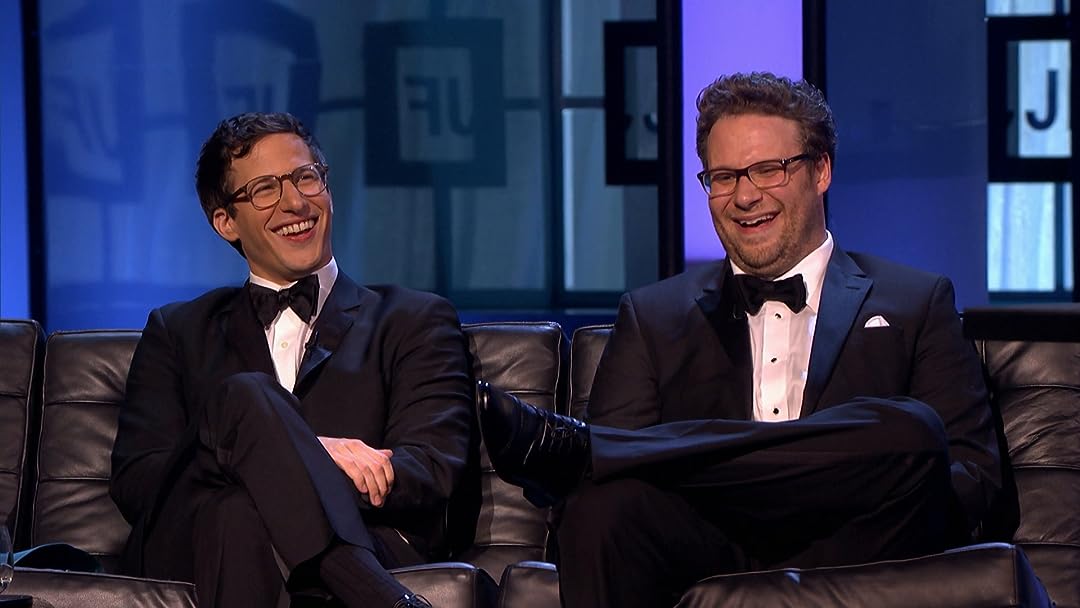 Laurence R. SaulReviewed in the United States on December 23, 2021
4.0 out of 5 stars
If you can look past the subject matter, you'll love this show.
Verified purchase
This is a pretty old roast but I decided to watch it when some highlights got recommended to me on youtube and I saw that some of my favorite comedians were guests. The subject of the roast obviously puts somewhat of a taint on the whole thing, but overall it is still completely hilarious. If you don't think you can handle looking at James Franco's smug-ass sexual abuser face for an hour, however, I wouldn't recommend it. I do forgive the comedians for not mentioning his heinous transgressions in their roasts, however, since the first allegation didn't actually come out until a year after this was taped. Okay on to the actual review:

I don't think Seth Rogan was the best choice for Roastmaster. He looked incredibly anxious the whole time--like he was terrified of messing up or just straight up wasn't entirely sure what he was doing. He never complimented previous roasters when introducing the next, which was pretty awkward, especially considering how talented most of these comedians are. He also made a lot of unfunny homophobic jokes at Franco's expense. During his whole introduction, he seemed to be doubting himself, almost like he was feeling guilty about every joke he made. I suppose that shows good character, but it isn't the best quality in a roaster, much less a Roastmaster. I presume he landed the role because he was Franco's most famous comedian friend--not for his talent in stand-up.

I'm not a big fan of comedians who specialize in roasts or exclusively do comedy at roast events. I think the worst sets were Jeff Ross and Natasha Leggero. Jeff Ross was almost completely unfunny. Natasha's set was enjoyable at times but was also incredibly racist towards Aziz Ansari in several jokes that weren't even remotely funny. She also made a very anti-Semitic joke about Nick Kroll, although I'm not sure she understood the full weight of comparing a Jewish person to a lizard. It's like she tried to offend every minority she could. I know a lot of people enjoy her roasts, but I honestly think her humor is mostly shock factor. The same goes for Jeff Ross. Offensive jokes can be funny at times, but both of these comedians' sets just made me cringe through most of them. Sarah Silverman does a similar kind of comedy, but I think it's more tasteful and I find her hilarious most of the time. I found her Jewish jokes funny because she herself, as well as most of the guests, were Jewish. I think offensive jokes only really work when they could also pertain to the comedian themselves (i.e. Jewish ppl can make Jewish jokes, gay ppl can make gay jokes, Black ppl can make Black jokes, etc.). If that's not the case, offensive jokes tend to just fall short in my book.

I found it funny how irrelevant Nick Kroll and Aziz Ansari seemed to be considered by the rest of the guests. This was 2013, so Aziz hadn't done any specials, and Master of None hadn't come out. Nick Kroll hadn't done Oh, Hello, and Big Mouth wasn't even a concept yet. I think both of their sets were pretty funny, and I'm glad Aziz acknowledged how racist some of the other comedians had been. Both of them followed the standard roast format.

My favorite sets were Jonah Hill, Bill Hader, and Andy Samberg. All of them took somewhat of a different take on roasting and put their own spins on it. Jonah starts his set by saying he likes everyone here so he's decided to just be nice, and proceeds to deliver some of the harshest burns of the show, all the while framing them as complements. (Side note: something that was also funny was how much everyone seemed convinced that Brooklyn 99 was going to flop.) Jonah's deliveries were also completely hilarious. His offensive jokes landed because they were personal and you can tell that he's friends with everyone on stage.

Bill Hader's comedy was genius as always. He created a new character just for this show called "The President of Hollywood," an aviator and track-suit wearing old Jewish man who is the embodiment of Hollywood itself. He delivered a multitude of clever and genuinely funny roasts to the guests, including Hader himself. I am never not impressed by Bill's character work, and he certainly didn't let me down this time.

Andy Samberg's set seemed like it was going to bomb at first, but then the audience warmed up to his self-deprecating humor and seemed to really enjoy it. Because of their time on SNL, Andy and Bill Hader serve as some of the most influential comedians of Generation Z. Both of them are Gen X, but they were on TV while we were growing up and their humor continues to shine through in a lot of what we find funny today. "Dear Sister" and "Laser Cats" are iconic even now. Andy's set is hilarious from the beginning, and I think most people in my generation would agree, so it was confusing to see the audience failing to laugh at one of the funniest sets of the show. Andy Samberg knows he isn't a stand-up comedian, and he's okay with that, so he finds a creative solution to make sure his set is still funny. He genuinely complements all the guests and simultaneously roasts himself, punctuating every "roast" with an iteration of "Boom! Roasted!" or "Who shall I lampoon next?" He finishes by admonishing his fellow guests for their homophobia and turning the premise of his set on its head at the last minute. The whole thing is genius.

Overall, I really enjoyed this roast, and as long as you can stomach James Franco as the subject matter, I'd recommend it.

I didn't think Seth Rogen was a good host for this show. It became pretty clear that a lot of these guys aren't really that good at stand up. I wish they had included Anthony Jeselnik or another insult comic other than Sarah Silverman and Jeff Ross. Sarah Silverman has gradually lost her appeal for me.
3 people found this helpful

robReviewed in the United States on October 15, 2013
5.0 out of 5 stars
Best Comedy Central Roast yet!
Verified purchase
If you like Comedy Central Roasts then you will love this one. It has the obligatory Jeff Ross. There's a relatively unknown female comedian in the mix who goes big rather than going home. And then there is are the friends of James... and Aziz (you'll have to watch to understand that). From Aziz to Jonah to Seth and on down the line, every single person was hilarious. Not a single Comedy Central Roast I've seen yet has been this consistently funny! It is a must see if you enjoy a modern comedy.
2 people found this helpful

Robert HayesReviewed in the United States on September 16, 2016
4.0 out of 5 stars
More gently funny than the other roasts, and not as vulgar (to its credit)
Verified purchase
James Franco is interesting, in an oddball sort of way, but not necessarily the first person I'd think of to roast. He's certainly done a lot, but the usual honorees have the bulk of their career behind them. Not this guy, which kind of makes it a little more interesting. I thought that the featured roasters were all well-picked, even if not all of them were funny. Basically, the dais was filled with a bunch of his friends, which made it more intimate. I also liked that they didn't go so heavy on the vulgarity, making the subjects a little more diverse than usual. Still...So. Many. Jew. Jokes (Bill Hader's turn as an old Jew in a tracksuit was probably the best instance of this). My personal favorites were Sarah Silverman and Jeff Ross, who have done well in other roasts. Jonah Hill and Andy Samberg were bombs in my opinion. Jonah Hill seemed like he was trying too hard (or couldn't keep his game face on), and Andy Samberg's ironic performance just wasn't funny to me. James Franco's rebuttal wasn't necessarily the best or the worst I've seen, but it was alright. Taken in context of Comedy Central's other roasts, this is certainly one of the more creative ones, even if the end result is rather tame.

The digs on Franco get a little repetitive (gay jokes... there were like a million... people who got to go later kinda suffered from the fact that everyone had made the same 3 jokes about Franco)

Overall... it was a roast. And a really good one for being within that category. If you don't normally like roasts - this probably won't change your mind, but if the concept doesn't immediately turn you off - this is a younger crowd which made it less of a recap of 20 year old acting resume and instead let people critique an ongoing career.

Christopher HerbstReviewed in the United States on July 7, 2015
4.0 out of 5 stars
This is the best Roast I've seen
Verified purchase
This is the best Roast I've seen. It seems a lot more natural and comfortable, like it's actually his friends doing this for fun instead of some strangers roasting a washed up celebrity in a last ditch effort to stay relevant.
One person found this helpful

Sarah PupelReviewed in the United States on June 25, 2014
5.0 out of 5 stars
Side-splitting humor, but a little politically incorrect. What else would you expect?
Verified purchase
This was sooooo hilarious! I like all of these roasts, but James Franco's had so many relevant comedians and was a downright side-splitter. Be forewarned, lots of jokes about him being gay (although he's not?), but what else would you expect from comedians like host Seth Rogan and Aziz Ansari? I will watch this one again and again. And again. :)
One person found this helpful
See all reviews
Back to top
Get to Know Us
Make Money with Us
Amazon Payment Products
Let Us Help You
EnglishChoose a language for shopping. United StatesChoose a country/region for shopping.
© 1996-2022, Amazon.com, Inc. or its affiliates