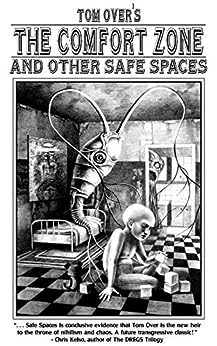 The Comfort Zone and Other Safe Spaces Kindle Edition

by Tom Over (Author) Format: Kindle Edition
See all formats and editions
Sorry, there was a problem loading this page. Try again.
We live in anxious times, you and I, desperately uncertain times. An era in which governments behave irrationally. Diseases ravage the populous. And internet culture threatens to change who we really are. Modern life, for many, is one giant trigger warning. You need a place of sanctuary, a refuge from the chaos - so follow me now, into The Comfort Zone and Other Safe Spaces. In the Zone nothing is what it seems. Houses defy the laws of nature while bodies become portals to impossible worlds. Viruses harbour mystifying enigmas and technologies incite the most subversive of desires. Unfathomable encounters lurk both beneath the waves and between the stars. Even birth and death, once knowable certainties, are here warped beyond all recognition. In his debut collection, Tom Over pushes the boundaries of genre storytelling into startling new realms. From transgressive weird fiction to 80s-inspired splatterpunk, from surreal dreamscapes to body horror nightmares. Exploring both earthbound fears and uncharted cosmic terror, these stories will lure you into spaces that, upon inspection, may prove not safe after all... | “Tom Over shows no bounds in how far he’s willing to go with the absurd and grotesque and I love him for it. He is a tightrope walker of a writer, balancing horror and pitch black humour with literary flare. Reading this book was the most fun I’ve had in a while. I loved these stories. I love this collection.”- Philip LoPresti, author of The Things We Bury | “...Safe Spaces is conclusive evidence that Tom Over is the new heir to the throne of nihilism and chaos. A future transgressive classic!”- Chris Kelso, author of The DREGS Trilogy | “Discomfiting. Unsafe. Grotesque. Night after night, these stories invaded my dreams." - Gregor Xane, author of The Hanover Block | “Inventive, transgressive, and bristling with dark life, Tom Over’s The Comfort Zone and Other Safe Spaces is an auspicious debut—it’ll have you turning on all the lights, laughing, wincing, asking yourself if he’ll GO THERE and discovering with gratitude that yes, he will in fact GO THERE…There and Beyond.”- Matthew M. Bartlett, author of Gateways to Abomination.
Read more
Previous page
Next page

4.8 out of 5 stars
4.8 out of 5
13 global ratings
How are ratings calculated?
To calculate the overall star rating and percentage breakdown by star, we don’t use a simple average. Instead, our system considers things like how recent a review is and if the reviewer bought the item on Amazon. It also analyzes reviews to verify trustworthiness.
Top reviews

Brad Tierney
5.0 out of 5 stars Top/Best of 2020
Reviewed in the United States on June 24, 2020
Verified Purchase
Wow. I went into this sweet fat baby with a positive attitude. Tom was new to me, completely. But I wasn’t scared, as he’s a BAMF. You’re gonna find out why.

I knew, seriously, by the middle of the third paragraph of the very first story, that Tom Over is truly someone very, very special. So very talented. Absolutely original. Massively creative, and told with such an economy of language, not a single word wasted or overused.

This baby also contains my now ALL TIME FAVORITE short story of 2020, probably of all time really. Prepare yourself for “Phylum” trust me.

Every tale was hand crafted and brewed with only the finest, all-natural ingredients.

I loved this book.

I love this book.

These stories WILL release serotonin into your brain. It’s absolutely wonderful.

Karla Peterson
5.0 out of 5 stars Fantastic Collection!!
Reviewed in the United States on November 7, 2021
Verified Purchase
"How I came to be here is clouded by fear and an instinctual need to be somewhere else, a safe place I cannot recall."

Often times short stories can fall flat. Some that are liked more than others and some that just do not leave a lasting impression.

This is not that book!

Every story was fantastic! Every. Single. One. These stories are worthy of diving into over and over!

A touch on many sub-genre's written with amazing effectiveness that had me completely captured by the darkness within. Visceral, grotesque, the stuff of nightmares, taking us to places of fear and dread.

janiec
5.0 out of 5 stars A scare for every horror lover.
Reviewed in the United States on May 29, 2020
Make room for a fresh new name in dark and weird fiction. With a talent for writing exciting, often gruesome and always imaginative short stories, Tom Over has presented us with a collection that promises a scare for every horror lover. These stories should be read in the order in which they are presented.

Subjects are varied and keep the reader both tense and engaged. A young man swallows objects to restore them to perfect working order. Until he finds something too big to digest...

An unusual plague drives victims into savage states of violence. Animals fly into killing frenzies, and survivors of this strange plague resort to chilling methods of survival.

Monsters are born both in the deep sea and amongst a human colony on Mars, all with surprising and questionable origins.

Television technology has advanced so far that it literally controls lives. With a simple earbud, prurient desires can become sentient. They can also prove embarrassing when witnessed by others.

An entire household undergoes unnatural changes, affecting both architecture and human occupants. The results are nightmarish and dizzying.

These are only some of the situations that are encountered in this smart and innovative collection. It is difficult to believe that this is Tom Over's first book. I for one look forward to all of his future offerings.

Many thanks to the author for providing me with an ARC of this book. My opinions reflected in the above review are honest and unbiased.
Read more
One person found this helpful
Helpful
Report abuse

Christine
4.0 out of 5 stars Christine's Horror Fiction Reviews
Reviewed in the United States on May 3, 2021
A couple of the stories in this collection, I’d seen elsewhere, but it’s always nice to renew the acquaintance ... well, maybe ‘nice’ isn’t the word I want here, since one of them was about various liquids and bodily fluids, and the other nightmarish leggedy creepy-crawlies ... but I’m getting ahead of myself.

My personal favorite of the bunch is “Tunnels,” in which a nameless loner still grieving his mother discovers, through an unusual series of circumstances, that there’s something very, um, unusual about his digestive system; it’s icky and squicky and gross but also clever, and funny, and kind of sad.

I also really liked “The Vegetarians,” a particularly twisted take on the zombie/infected trope, as starving survivors can’t help but notice the peculiar behaviors of the afflicted. And “Physical Media,” a cautionary tale of how letting technology have too much control over your life can lead to disastrous -- if hilarious -- results.

“The Happiest Thought” is one of the weirdest and neatest not-haunted-house kind of haunted house stories I’ve ever read; what’s going on seems more cosmic than supernatural, but even ‘cosmic’ doesn’t quite fit and seems to fall short; there’s not so much a sense of ‘entities,’ but ... I find myself wanting to use words like ‘physics’ and ‘quantum,’ but I’m not sure that’s right either. I have a feeling I’ll be thinking about this one for quite some time.

Other settings range from the oceanic depths to a colony on Mars ... there’s one told in the form of a script or teleplay ... sinister graffiti capable of driving living creatures mad wends its way through as a recurring element ...

Really, for something titled “The Comfort Zone and Other Safe Spaces,” you’re much more likely to come away from this one feeling anything but comfortable and safe, but I mean that as a compliment. Definitely a disquieting read.
Read more
Helpful
Report abuse

Kindle Customer
5.0 out of 5 stars Best book I've read in awhile!
Reviewed in the United States on February 27, 2021
The author of this book comes highly recommended and I've thanked the person who recommended it. Twice.
Now it's time to thank the author.. If I could give more than five stars, I definitely would!
This book is one of those rare ones where each story is just as good, if not better than the last. I can't even pick a favorite, they were all great. Definitely a fan and will be following the author and reading more.
Read more
Helpful
Report abuse
See all reviews

Ryan Hurst
5.0 out of 5 stars Lovers of weird horror should buy this book!
Reviewed in the United Kingdom on July 13, 2020
Verified Purchase
You know how they say the best horror films are the ones which make you think about it a few days afterwards, well that's how I feel about the stories in this book! There were definately bits in the majority of the stories where it sent a chill down my spine or I thought I might have been sick...

If you like the realm of the weird and grotesque with some dark humour sprinkled on top this book is the one for you. It's got such good little stories in it, covering zombies, evil computers, alien lifeforms etc but don't think this is just standard horror, oh no, this is something special.

Stand out stories for me, Tunnels, The Vegetarians, Physical Media, Phylum(which you could totally see being made into a film)and The Comfort Zone.

This is Tom Over's first collection of short stories and I thoroughly enjoyed reading them. I can't wait to see what he does next...
Read more
Report abuse

Amazon Customer
5.0 out of 5 stars Deliciously nasty
Reviewed in the United Kingdom on September 20, 2020
Verified Purchase
A joyfully twisted and intriguing collection of stories which never over stay their welcome, I read the lot in one sitting. The book gave me a feeling of queasy disquiet that stayed with me for days. If you like your horror stories gloriously gory and base but shot through with intriguing ideas and what if’s this is definitely your bag.
Read more
Report abuse

Rayan Williams
5.0 out of 5 stars I’m in it
Reviewed in the United Kingdom on June 22, 2020
Verified Purchase
I’m Rayan and I’m 10, and I’m in it as the main character in one. It’s brilliant.
Read more
One person found this helpful
Report abuse
See all reviews