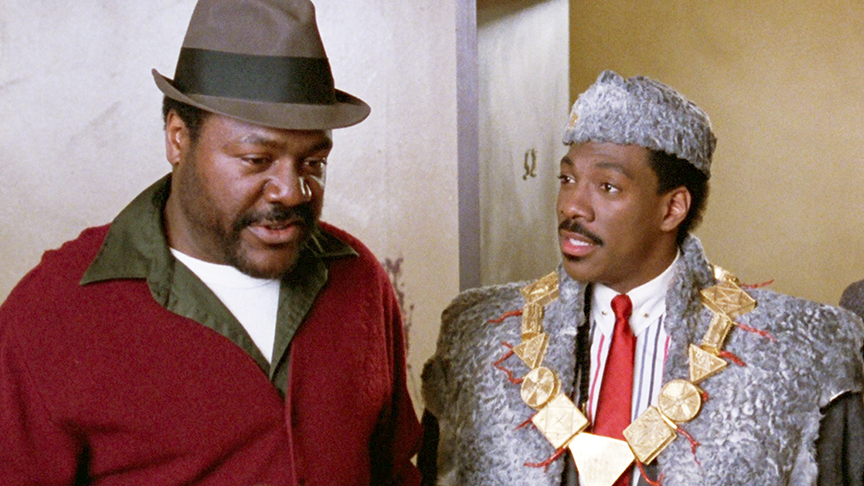 (21,460)
1 h 56 min2017X-RayHDRUHDR
On his 21st birthday, Prince Akeem of Zamunda is to marry a woman he never saw before. Now the prince breaks with tradition and travels to America to look for the love of his life.

dlbReviewed in the United States on January 29, 2021
1.0 out of 5 stars
Eddie Murphy is a good actor but this movie is awful
Verified purchase
This movie has frontal nudity, foul language, and makes women and people of color. It's just not a nice movie so I would skip this one. I'm sorry we paid to see it. I stop viewing after the first part.
33 people found this helpful

The story is a comedy romance featuring Eddie Murphy as Prince Akeem and his sidekick Arsenio Hall playing Semmi who leave their kingdom of Zamunda to come to America to find Murphy’s true love. He flips a coin and chooses to go to New York, and then finds Queens on a map as the place to find a wife.

The story presents one comedic scene after another. In Zamunda Murphy has an arranged marriage to a woman who was raised to serve his every need. He tests that by having her bark like a dog, then woof like an orangutan while jumping on one foot. In Queens, Murphy and Hall go to a club and talk to a number of women who are all ridiculous starting with the first who says she worships the devil to Arsenio dressed up in drag playing a woman who says she wants to eat both Murphy and his friend Hall up.

At its heart however Coming to America is a love story as Murphy discovers Lisa McDowell, Shari Headley, the daughter of his boss. He needs to court her while not revealing that he is a rich American prince because he wants her to fall in love with him for who is not, not what he owns.

There are also two notable cameos. The first is a very young Cuba Gooding Jr who is getting his haircut at a barber shop next to where Murphy and Hall are staying. The second is Samuel L. Jackson as a thief who attempts to stick up the burger joint Murphy and Hall work at.

Ultimately the film works on both levels. It’s hilarious and romantic.

P2 Avid ReaderReviewed in the United States on April 9, 2020
5.0 out of 5 stars
CAMPY CLASSIC EDDIE MURPHY -- OH THIS IS TOO FUNNY
Verified purchase
You first need to put it into context of the year the film was made. This is a classic African American film. I love the beautiful costumes. THIS IS NOT A CHILDREN'S MOVIE -- THERE ARE SCANTY CLAD AND TOPLESS WOMEN in some of the first scenes, sexual context situations. The entire movie isn't like that but the beginning sure is.

This is so Eddie Murphy humor and a Classic Quality "imprint" of a film. Do not expect high definition. It was fine on my large screen TV -- but I'm not all that picky either. Sound / Image were okay using Amazon Prime Streaming.

African prince travels to America to modest Queens NY to find a woman who would want him for himself-- not his family wealth or his title. He works at a bootleg version of McDonald's mopping floors and lives in a 4 story walk up modest apartment with his side kick -- who obviously would prefer a 5 star hotel!! They are trained in martial arts -- and there are some interesting fight scenes tossed into the mix.

It does poke fun at gold diggers and new rich culture -- be prepared to laugh!! COMEDY, CLASSIC.
20 people found this helpful

William ThompsonReviewed in the United States on February 21, 2021
1.0 out of 5 stars
If you like raunchy scenes and foul language ...
Verified purchase
... then you will love this.

I watched this many years ago with my wife and minor children. We loved it! I thought I would renew that love with a viewing today. Scenes that I assume were edited out for a general public 20-odd years ago were put in for this version. I couldn't make it past the first few minutes. Such a waste of cyberspace!
13 people found this helpful

Stella CarrierReviewed in the United States on October 30, 2020
5.0 out of 5 stars
Comedy Relief film
Verified purchase
I confess that around the October 1 2020 timeframe, I was randomly scrolling through multiple cable tv channels(an extended stay place that I was recently at in Virginia) and I felt drawn to watching some scenes of Coming To America that was featured on television. Fortunately I was able to easily obtain a version of Coming To America via Amazon to watch an unlimited number of times. Coming to America features the character of Crown Prince Akeem Joffer (Eddie Murphy) who has a close relationship with his parents king Jaffe (James Earl Jones) and his mother Queen Aoleon (Madge Sinclair). Prince Akeem Joffer and his family live a life of royalty and affluence/great wealth in the kingdom of Zamunda though even in the presence of Joffer’s friend Semi (Arsenio Hall) it is made clear that Prince Akeem Joffer wants to see more of the world that he grew up in for all of his life up until that point. Eventually, Prince Akeem Joffer ad Semi make their way to Queens, New York and are on a mission to help Prince Akeem Joffer find a woman who loves him for who he is, the type of love that stays lasting/enduring and independent of his royal status/prestige. Prince Akeem Joffer and his friend Semi get hired for employment at a fast food place named MacDowell’s owned by Cleo McDowell (John Amos) in hopes that this might eventually help bring him closer to Lisa McDowell (Shari Headley). However, Prince Akeem Joffer experiences the path to love holding certain curveballs that he must navigate because he must also successfully navigate the best way to deal with Lisa McDowell’s boyfriend Darryl Jenks (Eriq La Selle) and a well-meaning though very aggressive younger sister Patrice McDowell (Allison Dean) in addition to the socio-economic factors highlighted by certain blunt comments made by his well-meaning coworker Maurice (Louie Anderson), other multiple actors/actresses featured in Coming To America include Sheila Johnson, Frankie Faison, Samuel L. Jackson,Calvin Lockhart, Jake Steinfield etc. There are multiple pop culture references in Coming To America: one of the barbershop characters referencing some boxers Rocky Marciano and Joe Louis, a reference to Martin Luther King Jr., via a movie scene where there is a pageant showcasing multiple beautiful women, pop culture reference to McDonald’s, music tribute to Whitney Houston via the Greatest Love of All via a humorous cover band character portrayal etc.
8 people found this helpful

ReaderReviewed in the United States on March 3, 2021
1.0 out of 5 stars
Bare boobs. Offensive.
Verified purchase
I’m not the movie watcher I used to be. This just was offensive (because of the naked “bathing attendants”) and I wish I hadn’t watched it.
10 people found this helpful

Amazon CustomerReviewed in the United States on February 15, 2021
1.0 out of 5 stars
I don't know how someone could laugh at this...
Verified purchase
I've seen it for the first time on prime, and what a disappointment! It's not just the cliches (actually those are sometime funny), it's so bad on every level... It's like a bunch of 7 y.o. jokes one after the other. Acting is bad. Story? what story? Maybe with all the 5* reviews. I was expecting a decent comedy, but no... If you did not fall in love with this movie when you were kid, then it's not worth your time now!
7 people found this helpful
See all reviews
Back to top
Get to Know Us
Make Money with Us
Amazon Payment Products
Let Us Help You
EnglishChoose a language for shopping. United StatesChoose a country/region for shopping.
© 1996-2022, Amazon.com, Inc. or its affiliates