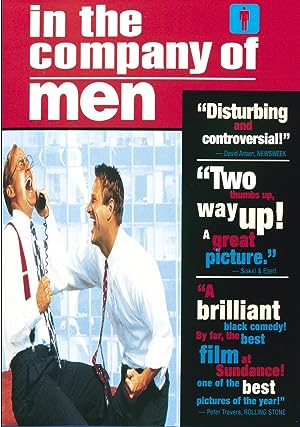 In The Company Of Men

Casey PonsReviewed in the United States on November 2, 2015
4.0 out of 5 stars
Two Viewings, Nearly Twenty Years Apart...
Verified purchase
I write this review after having viewed this movie twice. Once when it was released on DVD back in 1997, and once last night. I watched it in 1997 when I was working in the high-tech industry, and based on the "Two Thumbs Way Up" review rating strategically placed on the DVD cover. Viewing the movie originally from the opening credits, was intriguing for the simple reason as it was so in your face with sexist, racist innuendoisms. Meaning I couldn't quite decide if the writer/director was trying to condescend with a brilliance, and he would surely redeem himself if I was just to be patient....or something completely different, in that just maybe the cast of three main actor performances, were really what carried this train-ride of sorts down the one-way tracks.
That said, fast-forward nearly two decades, the dot.com bubble demise, two crippling economic re-sessions and my second and, (final viewing) last night revealed that just maybe the brilliance once perceived of the writer/director, was maybe not quite so brilliant of me to allow myself to be deceived.
I will not be quite so harsh as some of the single star ratings, as I don't think they believed the, "in your face" bigotry was intended to be just that. I gave this movie a four star rating because of the portrayed acting by Eckhart, Edwards and Malloy, and maybe not-so-much for the writing and direction or...lack there of. Although, the ending of the movie was even more difficult to watch this time, than the first viewing some twenty years ago.

Tmm BReviewed in the United States on September 11, 2015
4.0 out of 5 stars
Dirty Rotten Scoundrels
Verified purchase
I have seen this movie countless times and it never gets old, such a great and powerful film made on a shoestring budget that hits home. This is a movie about a cynical man who uses and manipulates anyone to get ahead including someone he calls friend. He comes up with an idea to pay an unsuspecting woman back for any woman who has ever hurt or used them and with that plan comes casualties. Aaron Eckhart plays this role so well as the office a**hole who for 6 weeks has the time of his life pulling strings, using women and unbeknownst to him using a man he calls friend and taking away basically everything he had.
This is the one movie that makes you hate to be a guy because of the light that we are portrayed in, and would hate to be a girl because she could never trust a man after this movie.
I enjoyed the dark humor, the movie that gives so much with so little to work with and the shear audacity that the character Chad gets away with.

Carol T.Reviewed in the United States on January 29, 2021
5.0 out of 5 stars
Excellent movie about the cruelties and shallowness of men toward a slightly disabled woman.
Verified purchase
I saw this on tv years ago, and it was chilling. It’s just as chilling now. It’s appalling to see how the men treated this lovely, deaf woman. They were truly detestable to her. The movie is well done and makes its point.
One person found this helpful

Astral_ComplexReviewed in the United States on June 12, 2019
5.0 out of 5 stars
What is a person capable of?
Verified purchase
This movie follows two guys on a business trip to a convention. One guy is a fast talker "good looking" guy and the other guy is more timid and reserved. Well, one thing leads to another and they end up placing a gentleman's bet on who could get this one woman to fall in love with them first and in part destroy her the most when they dump her. Very tough watch but such a fantastic film.

David LReviewed in the United States on December 18, 2017
5.0 out of 5 stars
Five Stars
Verified purchase
I love this movie. I fully understand why women won't like this movie. Though some here says this movie has no redeeming qualities, repugnant, disgusting, etc. It's still a great movie if one puts their sympathetic emotions aside. The Mist was another movie that had this type of ending, All movies can't have happy and good endings.
2 people found this helpful

Clarence OliverReviewed in the United States on March 6, 2007
3.0 out of 5 stars
Not as good as his later works.
Verified purchase
I agree with a review that Roger Ebert gave Your Friends and Neighbors, which was, it was like Quinten Tarantino's Pulp Fiction to his Reservior Dogs. This film is a singular work, not on the scope of Your Friends and Neighbors, and not as good. Some scenes were very good and entertaining, and because of that, surely deserves to be watched. Hopefully if it goes on sale even more. At 20 dollars it would be a good buy. However, I did not find myself drawn into the failures of the characters as much as I was hoping for. So I find myself having to give it 3 stars.
2 people found this helpful

T.M. ReaderReviewed in the United States on January 15, 2006
5.0 out of 5 stars
Embarrassed to say - I liked it
Verified purchase
Somehow I missed this 1997 sleeper until I caught it recently on late night TV. I have since ordered a copy of the video to keep and an additional one to share with friends. You can read about the plot elsewhere so I won't re-write it. The main character (Chad) commits such acts of cruelty my jaw dropped. It is so politically incorrect (the interview with the black employee)my jaw dropped. There are multiple surprise twists, up to the last minute. Funny -- disgusting -- heartbreaking. Watch this one.
6 people found this helpful
See all reviews
Back to top
Get to Know Us
Make Money with Us
Amazon Payment Products
Let Us Help You
EnglishChoose a language for shopping. United StatesChoose a country/region for shopping.
© 1996-2022, Amazon.com, Inc. or its affiliates