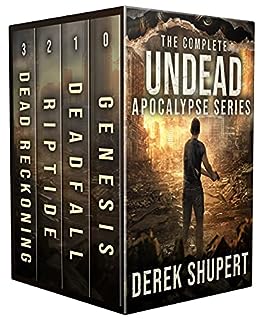 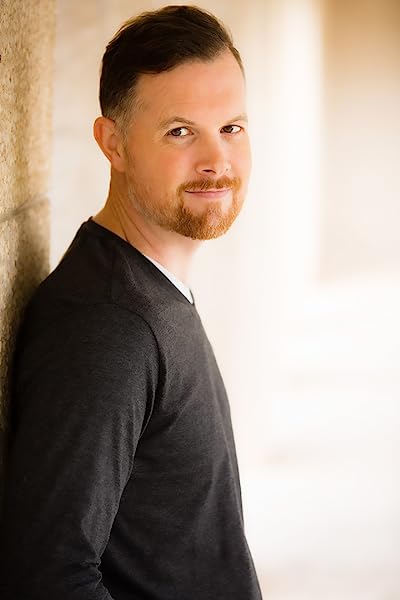 by Derek Shupert (Author) Format: Kindle Edition
Book 1 of 2: The Zombie Apolcaypse
See all formats and editions
Sorry, there was a problem loading this page. Try again.

Get the entire Undead Apocalypse series now in one complete edition.

If he could cure the big diseases…

…it would advance humanity.

Why would someone try to stop him?

Dr. Saunders skyrocketed to the precipice of immortality when his brainchild, Project Starlight, was green-lit by his company. He would be remembered forever, but not for the reason he hoped. There was a dark side.

Was his technology being used for another purpose?

Someone at their parent company has a secret.

Without his knowledge, his science was being perverted through genetics. They’ve been testing on human subjects. The poor souls strapped to the injectors have suffered. What is Trans Global Pharmaceuticals plan?

Do they want to wipe out humanity…

…or had something gone horribly wrong?

In an unknown lab, Mike and the other test subjects struggle to survive in a scientifically engineered hell-on-Earth. With the aid of those left to linger, Mike and his companions must find their way deep into the heart of the facility and escape before it’s too late.

And so, the race against time begins.

You’ll love all four books in the Complete Undead Apocalypse Series, because the battle against a world-wide disaster will keep you turning the pages.

The Complete Undead Apocalypse series is an action-packed story of surviving the end at all costs. If you like spine-crawling suspense and rugged adventure stories, then you'll love this post-apocalyptic tale.

BOOKS INCLUDED IN THE BOX SET:

Scroll up and grab your copy now! FREE with Kindle Unlimited!

Derek Shupert is an emerging Science Fiction Author known for his captivating dystopian storylines and post-apocalyptic-laden plots. With various books and anthologies underway, he is also the author of the Dead State series.

Outside of the fantastical world of sci-fi, Derek enjoys reading, exercising, and watching apocalyptic movies and TV shows like Mad Max and The Walking Dead. Above all, he is a family man who cherishes nothing more than quality time spent with his loved ones.

To find out more about Derek Shupert and his forthcoming publications, visit his official website at www.derekshupert.com

georgia-sunflower
2.0 out of 5 stars So difficult to read.
Reviewed in the United States on December 16, 2021
Verified Purchase
This book starts put with Dr. Saunders as the primary character. With no warning it changes to someone we know nothing about. This along with the author’s need to detail every thought, movement, or object made for a choppy read. I am shocked at all of the 4 & 5 star reviews. Maybe if I’s kept going I’d feel different but I don’t have the desire. I read for pure enjoyment. If it feels like a chore, its tine to put the book down.
Read more
One person found this helpful
Helpful
Report abuse

Michelle
5.0 out of 5 stars Infected
Reviewed in the United States on October 30, 2021
Verified Purchase
Told in first person, this story follows the life of an individual used as a guinea pig in the trials of a new vaccine that turns its victims into flesh eating zombies. Mike is able to adapt to the virus making him the first and only person to do so. Follow along with him as he fights the virus inside himself with his only plans being to kill the people that did this to him and find his wife. Many try to stop him and many help his cause.
Read more
Helpful
Report abuse

David Merchant (Santa Claus)
1.0 out of 5 stars worst dribble I’ve read in years
Reviewed in the United States on January 8, 2022
Verified Purchase
This story is so disjointed, jumps all over the place. Most of the story is the actual blow by blow fighting of zombies. It is written much like some sixteen year old sitting around telling his friends about a video game he was playing. Very disappointing
Read more
One person found this helpful
Helpful
Report abuse

Trish
5.0 out of 5 stars Very good series
Reviewed in the United States on July 17, 2021
Verified Purchase
I’m normally not a big fan of zombie books but this series was really good. It’s not the same old zombie theme. Good characters and a storyline that I really got into
Read more
One person found this helpful
Helpful
Report abuse

Kelly
5.0 out of 5 stars Love love love!
Reviewed in the United States on September 12, 2021
Verified Purchase
Derek writes AMAZING and entertaining books! If you’ve never tried his books, try them! You will not be disappointed!
Read more
One person found this helpful
Helpful
Report abuse

BarbaraSS
5.0 out of 5 stars Complete Gangbuster!!
Reviewed in the United States on August 5, 2021
Verified Purchase
Lots of action and adventure! Loads of undead and bad guys. A little emotion with friends and rescue the girl in the end...
Read more
Helpful
Report abuse

Kat Olsen
5.0 out of 5 stars Not just another zombie story
Reviewed in the United States on July 13, 2021
If you like zombies and are tired of the same old zombie apocalypse then you will love this series! It's well written with characters that make you care for them, worried about happens to them. It's not a quick read but it only took me 3 days to read because I couldn't put it down! I will warn you though, when you start on the second book you may get a little confused like I did because the main character does switch to another then the first book. It took me a little time to realize the first book was for the background and the second one starts some time after the first one ended. I highly recommend this book! I was given an advanced copy for a honest review but I would have definitely bought it!
Read more
5 people found this helpful
Helpful
Report abuse

Jen Sage
5.0 out of 5 stars I highly recommend this page turner!
Reviewed in the United States on July 14, 2021
I enjoyed the book from the beginning because Derek, (the Author) is so descriptive and builds suspense.
I also enjoyed the amusing banter by the characters.

It’s an action-packed adventure story! A Post-Apocalyptic Zombie thriller, where the good guys race to survive in situations where normal comforts, conveniences, and rules are stripped away by an evil Pharmaceutical plant Manager… I’ve watched the TV show “The Walking dead”, so I never thought I would be cheering on a Zombie,..well he’s not really a Zombie .. I can’t explain more without a committing a spoiler.
A big Pharma company with an army of their own have created a scientifically engineered virus, when human test subjects strapped down in the lab, manage to escape. This evil Pharmaceutical operation was moved to an overseas country, presumably to avoid scrutiny in the USA. They covered up a lab leak and created monsters. Mayhem ensues as the authoritarian military causes civilization to collapse. This big Pharma covering up the lab leak blunder, dispersing the virus is scary, …and tempting to binge read, as the main character searches for a cure.
I have enjoyed reading previous books by this author, so I was keen to get an ARC of the Complete Undead Boxset.
Read more
3 people found this helpful
Helpful
Report abuse
See all reviews

Corinne
5.0 out of 5 stars An absolute ripper of a series !
Reviewed in Australia on July 14, 2021
Verified Purchase
This is another exciting series by Derek Shupert to get into. A really great storyline that has you hooked from the beginning. Mike is the main character who has been experimented on and injected with a virus that will turn him into a ravenous monster. He continually battles to keep one step ahead of his enemies who in turn do everything in their power to keep him from escaping. I found this 4 book series to be riveting and I hope it won't end here..
Read more
Report abuse
See all reviews