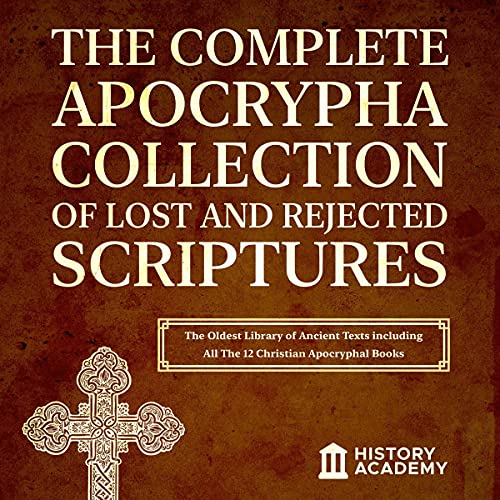 The Complete Apocrypha Collection of Lost and Rejected Scriptures: The Oldest Library of Ancient Texts including All the 12 Christian Apocryphal Books

The Collection of Christian Apocryphal Books:

Etymologically, the word "apocrypha" means "things that are hidden", but why they were hidden is not clear.

These ancient texts provide commentators’ valuable insight into what many ancient Jews and early Christians believed when, “God, who at sundry times and in divers manners spake in time past unto the fathers by the prophets” (Heb. 1:1).

The number of books in the Bible depends on which Bible is being referenced. Protestant and Catholic churches recognize 27 New Testament books. Protestants recognize 39 books of the Jewish canon in the Old Testament. Roman Catholics hold 46 books of the Old Testament as canon, along with expanded versions of Esther and Daniel. In addition to the 73 books of the Catholic Bible, the Orthodox Church adds three more books to their canon. By far, the largest canon of all is found in the Ethiopic Church, whose Bible totals 81 books. This Apocryphal volume contains the books of the Catholic, Orthodox, and Ethiopic Bibles.

The texts were carefully reformatted and reproduced to provide the listener with a comprehensive collection of the most critical lost, rejected, and forgotten books of the Bible. In an effort to build an all-in-one volume of these texts; we present to you the "The Apocrypha Collection".

History Academy represents a global bookshelf of the best works throughout history and across genres and disciplines. Listeners trust the series to provide authoritative texts enhanced by introductions and notes by distinguished scholars and contemporary authors, as well as up-to-date translations by award-winning translators.

Your audiobook is waiting!
Learn more about membership
List Price: $14.95
You Save: $1.96 (13%)
By completing your purchase, you agree to Audible’s Conditions Of Use
Sold and delivered by Audible, an Amazon company

Amazon Customer
1.0 out of 5 stars bizarre copy errors
Reviewed in the United States on March 13, 2022
The text had strange repetitions that are not in the original and then sometimes there are random comments in Italian, and on the first page in one Esdras The text randomly starts talking about the Bible in third person so to speak.
Images in this review

Wanda L. Weidman
1.0 out of 5 stars Confusing format
Reviewed in the United States on August 18, 2021
Verified Purchase
This is NOT the Apocrypha, and certainly not complete. It is laid out in a totally confusing manner, sections not connecting with each other, without chapter and verse. I ended up throwing it in the trash and finding another version of the Apocrypha.
Read more
99 people found this helpful
Helpful
Report abuse

A D
TOP 500 REVIEWER
5.0 out of 5 stars Find the rest of the story
Reviewed in the United States on August 3, 2021
Verified Purchase
If you're looking to try to find the lost information for the religion Christianity this book written by the history academy contains all 12 of the oldest loss and rejected scriptures from the ancient text . I would suggest reading it with your Bible so you can get a full understanding of why I may have been left out. This way you'll be able to draw your own conclusions. The stories were very intriguing.
Read more
41 people found this helpful
Helpful
Report abuse

Amanda Lynn
TOP 500 REVIEWER
5.0 out of 5 stars Great Book of Scriptures
Reviewed in the United States on August 4, 2021
Verified Purchase
While these books are not in the bible for whatever reason, I really enjoyed reading them. Anyone who believe in God would enjoy reading these. The Wisdom of Solomon is my favorite. It was easy to read several chapters or even a book while drinking a cup of coffee.
Read more
31 people found this helpful
Helpful
Report abuse

M. Gamez
5.0 out of 5 stars Controversial Reading; decide truth or false.
Reviewed in the United States on April 8, 2022
Verified Purchase
I have read the JKV of the Bible and seems as every epilogue finishes with truth and honor is conceived by the scriptures. Yet finding that many of the scriptures were erased because of the stories ending. Such as why Jesus Christ left his tomb for 3 days? What occurred during those days and the Romans did not discover that the temple was open yet Mary Magdalene was the first to find the body missing.
Read more
3 people found this helpful
Helpful
Report abuse

KeviaG.
2.0 out of 5 stars A waste!
Reviewed in the United States on March 16, 2022
Verified Purchase
I am often skeptical when a Non-Hebrew translates a text, The oldest library of Ancient Text...1st the so called Apocryphal is not "Christian" by any means...there was never any mention of a "Christ" the True Hebrews believed in Yahuah, the Eloyim of Abraham, Isaac and Jacob. The coming Messiah did not have a name and is referred to as the Anointed, or the Hamasch which is by all accounts Yaakov (jacob) not Yasuha(Jesus) who was declared the 1st born or the messiah by Constantine 305-330 AD. Thanks to the Roman Catholic theology, the will of Edo-rome to assert itself in the God head and assume the inheritance of the CHOSEN by way of rewriting the Hebrews Scripture. We now have these fake translations where text like "White people" (pg 330 chapter 90) have to be inserted for people to receive the idea that one "Jesus" is white and that GOD is White so the imposter jews in Israel today line up with false doctrine. The true history of a nation, of a people has been hijacked and distorted, rewritten for what is a new world order, sold to "Christians" as the New Testament of a God who saves all people who believe in him...the GOD of the Hebrews and Eloyim of the "people of the book" is not a universal Eloyimz but the Babylonian ROMAN CATHOLIC CHURCH God Mirtha does! If you are a Black or Brown person reading this comment your ancestors are the HEBREWS, the true CHOSEN, we are Israel and Jesus is not the savior, the messiah...dig deeper. They have taken our Ancient Text and crafted it to include themselves but they are not and were never in it. "JACOB I have loved, but Esau I Hated" Roman's 9:13
Read more
16 people found this helpful
Helpful
Report abuse

Amazon Customer
5.0 out of 5 stars It isn't just about the scriptures, it actually translates them all in full
Reviewed in the United States on August 11, 2022
Verified Purchase
I love this book. I ordered a different book in the past and it didn't include the actual scriptures, it just discussed the details about them. This book includes the actual scriptures themselves, written on nice big pages. It's exactly what I was looking for and I love that it's a paperback. Their added commentary is also interesting and meaningful.
Read more
Helpful
Report abuse

Amazon Customer
5.0 out of 5 stars Great book
Reviewed in the United States on September 1, 2021
Verified Purchase
I like it
Read more
One person found this helpful
Helpful
Report abuse

Lorella D'Errico
5.0 out of 5 stars A complete collection
Reviewed in the United Kingdom on July 30, 2022
Verified Purchase
A full collection of the whole story, its a full library including 12 books, I found it very informative and made me more curious about the topic.
Read more
One person found this helpful
Report abuse

mark twain
5.0 out of 5 stars puzzle solved
Reviewed in the United Kingdom on September 19, 2021
Verified Purchase
long awaited explanation of the apocrypha which has long puzzled me
Read more
4 people found this helpful
Report abuse

ian sheppard
1.0 out of 5 stars No good
Reviewed in the United Kingdom on July 9, 2022
Verified Purchase
Not what expected not set out too well hard to follow not set out that good either
Read more
Report abuse

Elizabeth Jones
5.0 out of 5 stars apocrypha
Reviewed in the United Kingdom on May 29, 2022
Verified Purchase
Extremely insightful experience to read such a book. Witness statements of our Lord Jesus Christ and Lord Almighty. How by not having God in our lives leads to devastation for many. Heed His words.
Read more
One person found this helpful
Report abuse